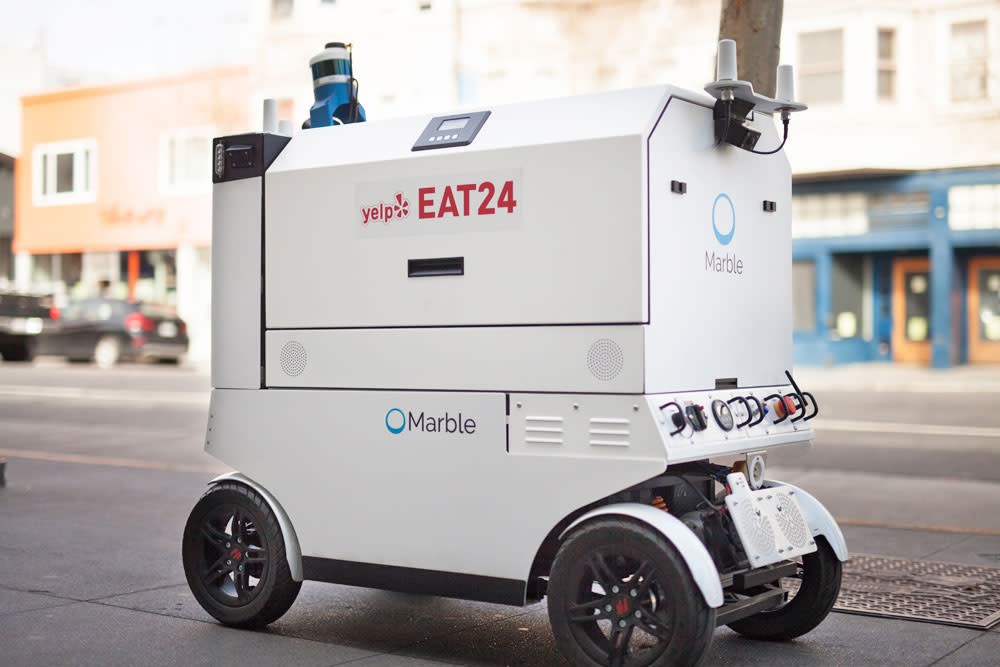 While Amazon continues refining its delivery-by-UAV dream, Yelp is gearing up to test a grounded method to autonomously transport take out. The company is partnering with Marble to use their wheeled drone, which is designed to carry perishable cargo, to try out unmanned food delivery for its Seamless-like Yelp Eat24 service. Naturally, it's starting the drone delivery trials on the streets of San Francisco.

Specifically, they're sending Marble's robots on trips around SF's Mission and Potrero Hill districts, so lucky Eat24 patrons might get the option to have their grub delivered via the boxy drones -- and their humans. Handlers will "chaperone" the autonomous bots to make sure their initial forays into the world go smoothly.

The robots use NVIDIA's TX1 Jetson supercomputers to digest environmental data coming from a suite of cameras, LiDAR, and ultrasonic sensors, the same sensors used by autonomous cars. As they expand delivery to more neighborhoods, Marble and Eat24 will use their drones to map the city's sidewalks and develop optimized routes. Someday, these robots could progress to truly unmanned courier jobs -- and then, folks living above ground level will learn a cruel truth about the limits of our wheeled autonomous robo-coolers and their inability to defeat stairs.

In this article: eat24, gadgetry, gadgets, gear, marble, yelp
All products recommended by Engadget are selected by our editorial team, independent of our parent company. Some of our stories include affiliate links. If you buy something through one of these links, we may earn an affiliate commission.