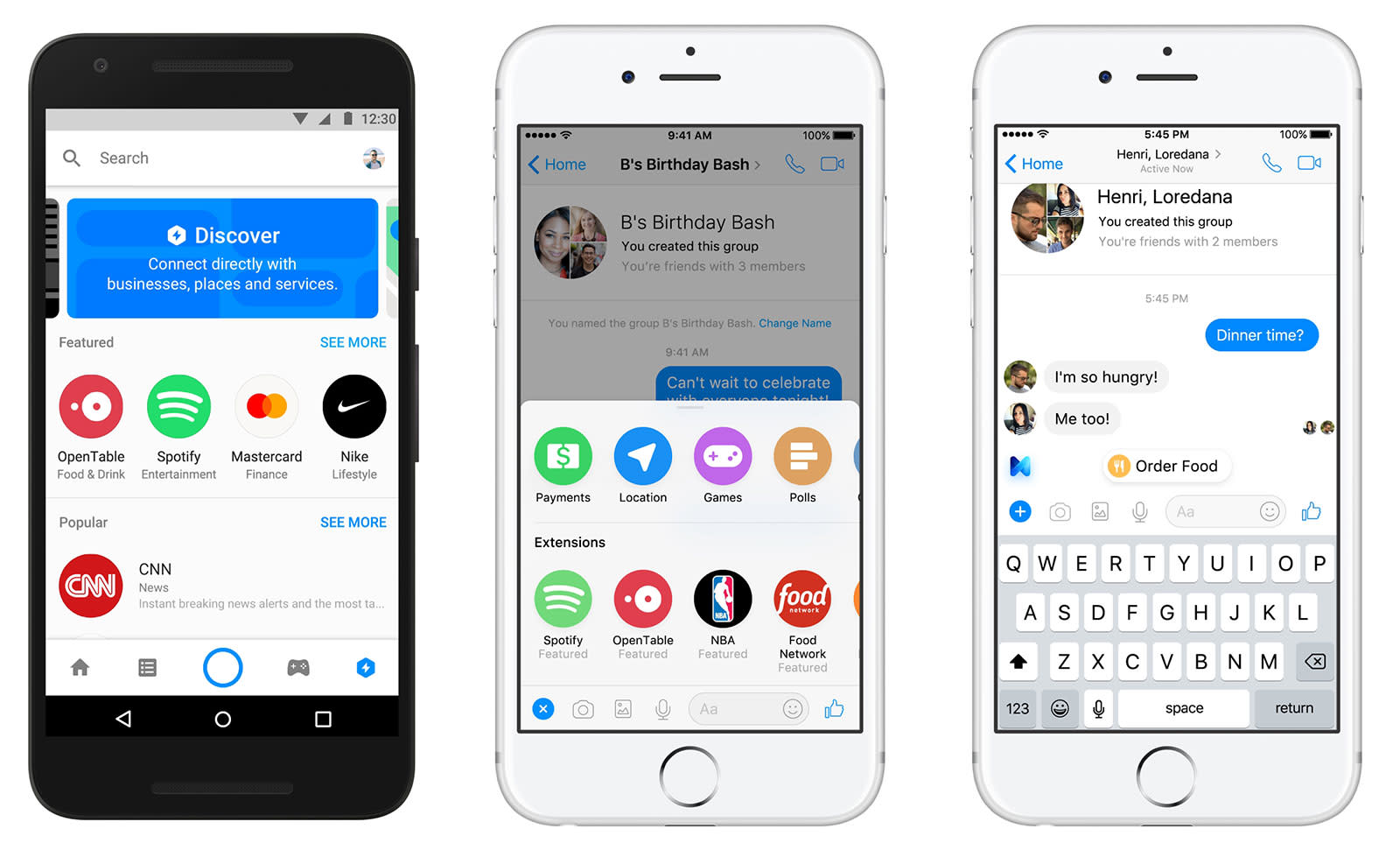 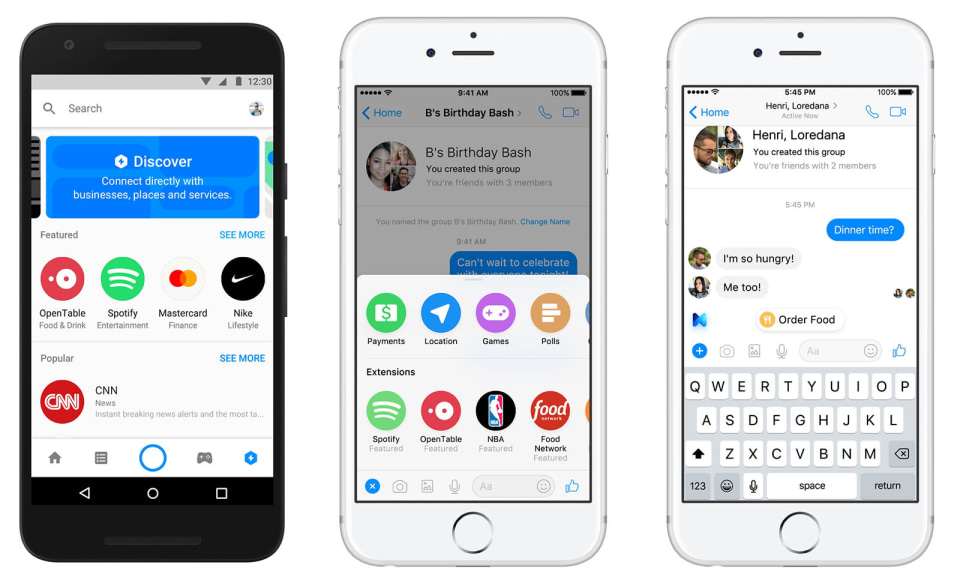 Last week, Facebook announced that Messenger now has 1.2 billion monthly users, making it one of the most popular messaging apps in the world. With so many users on its platform, it's no surprise that businesses have been clamoring to be on Messenger as well. At last count, 60 million businesses are on Facebook, and 80 percent of them have messaging enabled. The idea is that be it with a real-life human or a simple chatbot, the direct Messenger conversations between businesses and consumers will make users' lives "more seamless and fun." With Messenger Platform 2.0, Facebook hopes to realize this even further with a new Discovery tab, chat extensions, smart replies, an AI-driven delivery service and more.

One of Facebook's main goals is to make businesses more successful at using Messenger. Facebook attempted to do so last year with the introduction of chatbots, but that has been a little slow to take off. "Chatbots were always a means to an end, not an end," says Stan Chudnovsky, head of product at Messenger. "Our goal was always to enable meaningful and useful conversations between people and businesses. Bots were a means to achieve that goal."

So at F8 2017, the focus is more on helping people find these businesses in the first place. "The number one thing businesses want is to be discovered," says Chudnovsky. "So we are connecting the White Pages, the people's directory, with the Yellow Pages, which is the business directory." That's why one of Messenger 2.0's new features is a Discover tab just for businesses. Tap the hexagon icon on the bottom right and you'll see a list of Featured businesses along with popular bots, what's nearby and a bunch of categories like Food & Drink, Entertainment and News. From there you can find out more information about any business, book an appointment or simply start a conversation. There's also a search field if you want to talk to a specific store.

But that doesn't mean Facebook has given up on bots. In fact, it's making them easier to access than ever thanks to Chat Extensions, which is a way for multiple people to chat with the same business at the same time. So if you're in a group conversation with friends and you want to share the latest Kendrick Lamar album, you can just tap the plus button, choose Spotify, enter in the name of the song, hit "Send to Group" and it'll drop in a Spotify music bot in the thread. Tap the play button and you'll hear a short preview clip; if you're already a Spotify user, however, you'll hear the whole song. The same experience goes with other bots too, like OpenTable (make dinner reservations with a bunch of your pals), Kayak (arrange those group travel plans) or the NBA (discuss the scores of last night's game). (Update: David Marcus said on stage at F8 that there'll be an Apple Music chat extension coming as well)

Oh, and remember the "M Suggestions" personal assistant feature that Messenger rolled out a couple of weeks ago? Well there's going to be one more update to that, and that's integration with delivery.com. So if you're chatting with your friends about what to have for dinner, M might pop up a suggestion to place an order from your favorite restaurant. And then you can do just that -- all the way from picking what you want (maybe a pizza with pepperoni?) to paying for your meal. This is the first third-party business to get access to Facebook's AI layer, so it's a little bit of a test for Facebook. "All of that AI complexity, all of that neural network stuff, will be built for developers as well," says Chudnovsky. Like M, delivery.com suggestions will get better over time as it learns more about you. Eventually, Facebook plans to open up M suggestions to even more third-party developers, so stay tuned to see more integrations like this going forward. Oh, and M Suggestions will start recommending Chat Extensions too.

If you're a business who doesn't necessarily want a full-on chatbot but still wants an easy way to communicate with customers, there's a new AI-enabled feature for you too. It's called Smart Replies, and it's really just a way to enable automated answers to frequently asked questions. So if customers ask "When are you open?", you don't have to keep answering "From 8 to 5;" you can just program Smart Replies to do that for you. Of course if the customer asks for more than that, Messenger will prompt you to reply just like you usually would.

And hey, bots aren't just all work and no play. At F8, Facebook is also announcing additional features for game bots and "rich gameplay" for turn-by-turn games like Words with Friends. The games are integrated right into Messenger thanks to a new Games tab, so now you can challenge your buddies to a duel while trash talking them at the same time.

Last but not least, Facebook is also rolling out Messenger Codes to businesses and bots (It introduced them as a way to find your friends last year). The idea here is that if you see one of these parametric QR codes at a baseball game, for example, you can just scan it to add the related bot to Messenger.

With all of these features in Messenger, it's easy to see why many people are calling the app bloated these days. But Facebook really wants Messenger to be your one-stop-shop of communicating with the world, be it for chatting with your friends or ordering a pair of shoes. Whether or not it succeeds, however, is another story.

In this article: f8, f82017, facebook, gear, internet, messenger, mobile
All products recommended by Engadget are selected by our editorial team, independent of our parent company. Some of our stories include affiliate links. If you buy something through one of these links, we may earn an affiliate commission.