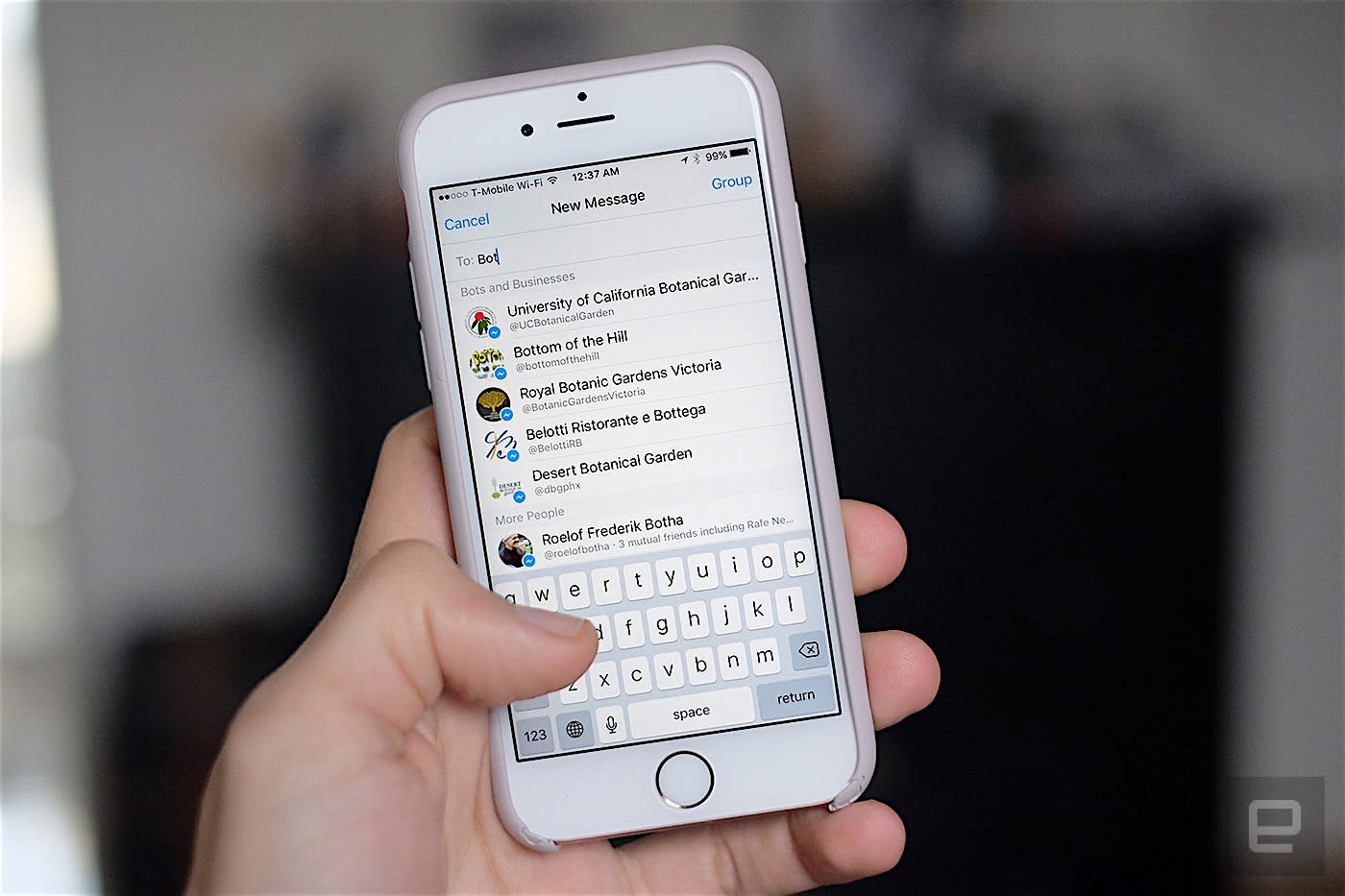 As we suspected, Facebook is indeed adding chatbot support to Messenger, and it's officially called "Bots for Messenger." It's not a surprise at this point, given that the latest Messenger update shows a "Bots and Businesses" section and that there have been rumors floating around about it for a week now. Still, Zuckerberg & Co. finally made it official. Facebook's CEO gave a demonstration onstage about how he ordered flowers from 1-800-Flowers just by sending a few messages to the company's chatbot. There was also a demo of a CNN bot that offered breaking news after sending a request.

Messenger has 900 million monthly active users, says Zuckerberg, and it's also the second most popular app on iOS globally. Further, there are 50 million businesses on it and over 1 billion messages sent every month. Head of Messenger David Marcus announced that the beta version of Messenger Platform is going live today so that developers can get started on creating bots for the chat app. Devs can incorporate "special bubbles" in Messenger that have unique images, buttons or calls to action.

Marcus showed a demo of a spring shopping app that guided him through buying a pair of shoes, where he could pick out the kinds of shoes and even get an order-confirmation update. He also showed off a Poncho weather bot that gives humorous conversational-style updates on the weather. Importantly, he pointed out that users can block messages from bots anytime they want if they've had enough. This is especially important given that Facebook is experimenting with allowing sponsored messages from a small number of businesses -- you're able to mute and block messages you don't want to receive.

How do you find out about these bots? Well, Messenger will now have a persistent search bar at the top of the app. Also when you have your cursor in the search field, Messenger will auto-populate several bot suggestions based on your preferences or what it thinks you might like.

What's even more interesting is that along with this new Platform, Messenger is also leveraging its learnings from M, its' AI-powered personal assistant. Developers will now have access to the same wit.ai bot engine that powers M, hence allowing for more complex conversations beyond just the usual phone tree chatter.

In this article: chatbots, culture, f8, f82016, facebook, messenger, mobile, services
All products recommended by Engadget are selected by our editorial team, independent of our parent company. Some of our stories include affiliate links. If you buy something through one of these links, we may earn an affiliate commission.