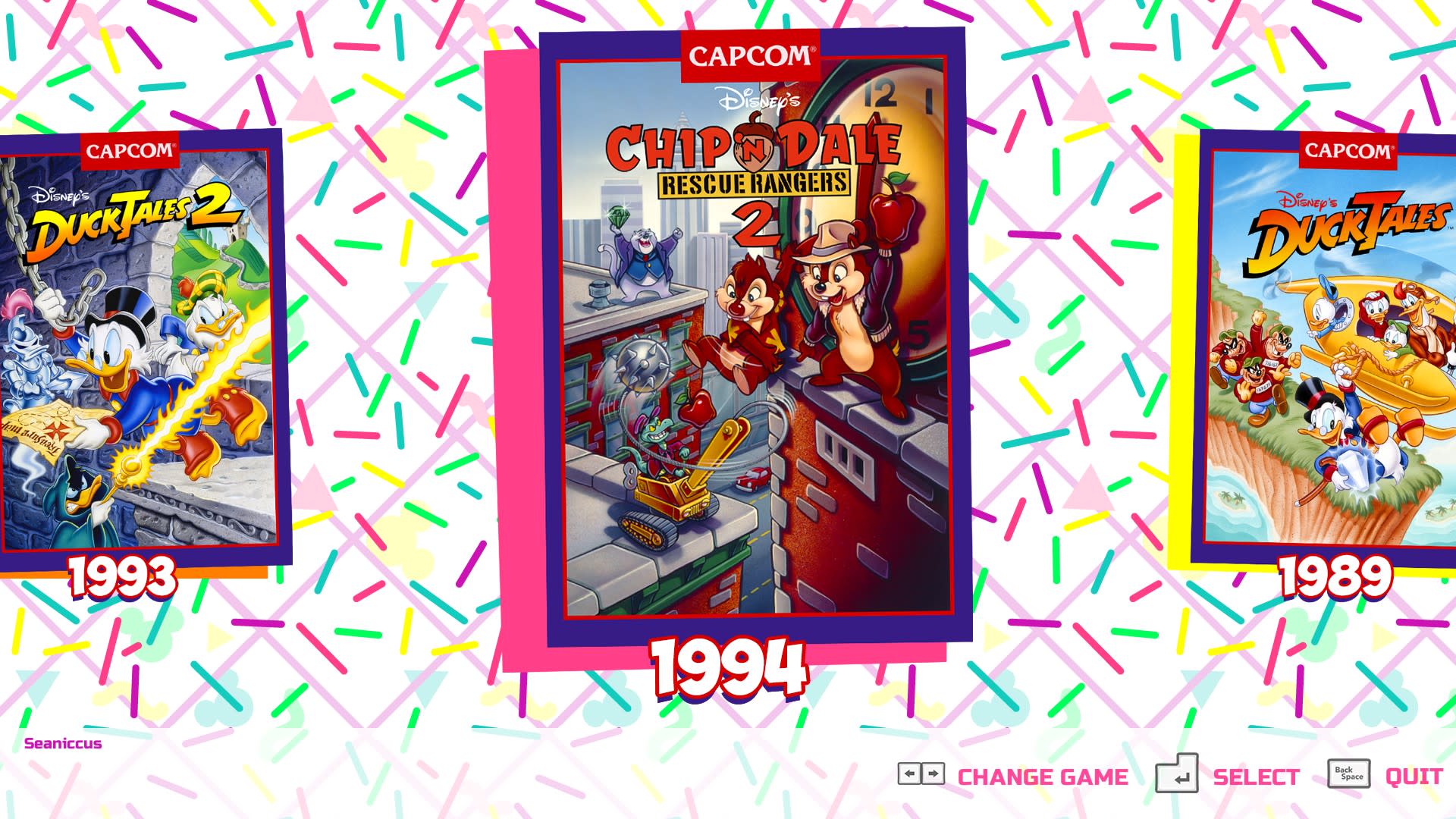 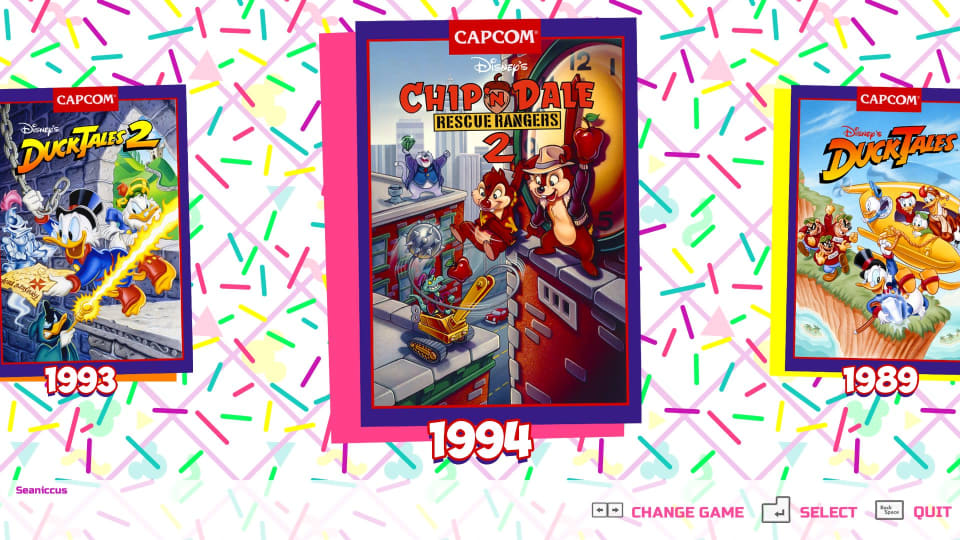 Recapturing the feeling of playing video games of bygone eras is no easy task. Sure, a simple emulator can technically drag ancient software to modern television screens, but anyone who grew up playing 8-bit games can tell you the experience isn't always the same. Pixel-perfect presentations can sometimes lack the nostalgic charm of the distorted, fuzzy tube TVs old games were originally designed for. That's one of the things that makes Capcom's Disney Afternoon Collection so special. It doesn't just collect Ducktales, Rescue Rangers and other iconic NES Disney games in convenient one package -- it wraps them in the style, context and visual limitations of the 1990s.

Everything about this Disney collection harks back to the 1990s in some way -- from the neon-triangle game logo and sprinkle-confetti menu backgrounds to the 8-bit music, classic gameplay and retro visual filters. From the moment the game boots up, it's poised to put the player in the mind-set of its original era. This is part of developer Digital Eclipse's four-point philosophy of classic-game rereleases: accuracy, context, presentation and sustainability. "All of our philosophies go back to artistic intent," Frank Cifaldi told Engadget. As Digital Eclipse's head of restoration and the founder of The Video Game History Foundation, he has a passion for preserving classic games as they were intended to be experienced. Figuring out how to do that is a lot more complicated than just putting old code on new screens. "I don't think that there's a definitive answer to the artistic intent of graphics of an NES game," Cifaldi says. "If you rounded up everyone who worked on these games, you'd get some different answers." That's why games built on the developer's Eclipse engine, such as The Disney Afternoon Collection and Mega Man Legacy Collection, allow users to choose from multiple visual modes -- including an unfiltered view, a TV mode with CRT effects and a simple scanline "monitor" setting. That same commitment to artistic intent, however, is also why other display modes were left out.

"When you play an NES game on an emulator, typically every pixel is exactly square," he says. "But if you were to actually display an NES game on a CRT, it's a little bit wider than that." The kind of pixel-perfect displays we use today just weren't available when these games were originally released, and many developers likely built games with the limitations of CRT monitors in mind. That's why the Eclipse engine uses pixels that are just slightly wider than they are tall and include light color bleeding and after-image effects in its TV filter mode. "We're bringing these games back to the way they were meant to be viewed," he says.

But Cifaldi notes that the developer's artistic choices are just one interpretation. "I put air quotes around that," he says, repeating that there's no true, definitive catch-all answer for how old games are supposed to look. "You just have to sort of make a series of decisions that all revolve around what is artistic intent and what is the best player experience."

When Digital Eclipse developed its retro-game porting engine for Megaman Legacy Collection, it had to make stylistic choices that lend the games a CRT feel even when played on a high-definition screen. The effort is less about simulating ancient TV technology than it is about tricking the eye. "That ghosting that we do? Totally inaccurate. That's not the ghosting that you would see on a CRT, but it still looks like it to you, right?" It does. The effects developed for the company's Megaman project carry over well to The Disney Afternoon Collection, presenting the classic games with a subtle TV filter that, despite technically distorting each game's graphics, make them look better than they might as pure pixel output. At least to some eyes.

This attention to detail given to the games' visuals are fantastic, but in some ways it's just a cherry on top of an otherwise great package. Underscored with remixed chiptune music, the game's neon menu draws users into the '90s mind-set, and a digital museum of game boxes, retro advertisements and development artwork provide ample context for the era these games were made in. Even for those unconcerned with the history of the games, it's a good value, offering a handful of excellent but rare Nintendo classics for $20. Any Nintendo fan who grew up watching the Disney Afternoon would be remiss not to look into this collection. Ducktales and its sequel are both solid platformers in their own right, as are Darkwing Duck and both Rescue Rangers games. Heck, even TaleSpin is pretty good once you get past the first level -- but Digital Eclipse's work on the Disney Afternoon Collection also serves as an example of what passionate retro gamers can do if they have the resources and support of the original license holders. "We think about this stuff more than most humans should think about it," Cifaldi says. "How to like, accurately present an NES game. That's just our passion, that's where we come from." The passion shows.

Disney Afternoon Collection is available on PC, PS4 and Xbox One.

In this article: av, capcom, chipndale, classics, crt, disney, disneyafternoon, ducktales, games, gaming, interview, nes, nintendo, pc, pcgaming, ps4, xboxone
All products recommended by Engadget are selected by our editorial team, independent of our parent company. Some of our stories include affiliate links. If you buy something through one of these links, we may earn an affiliate commission.