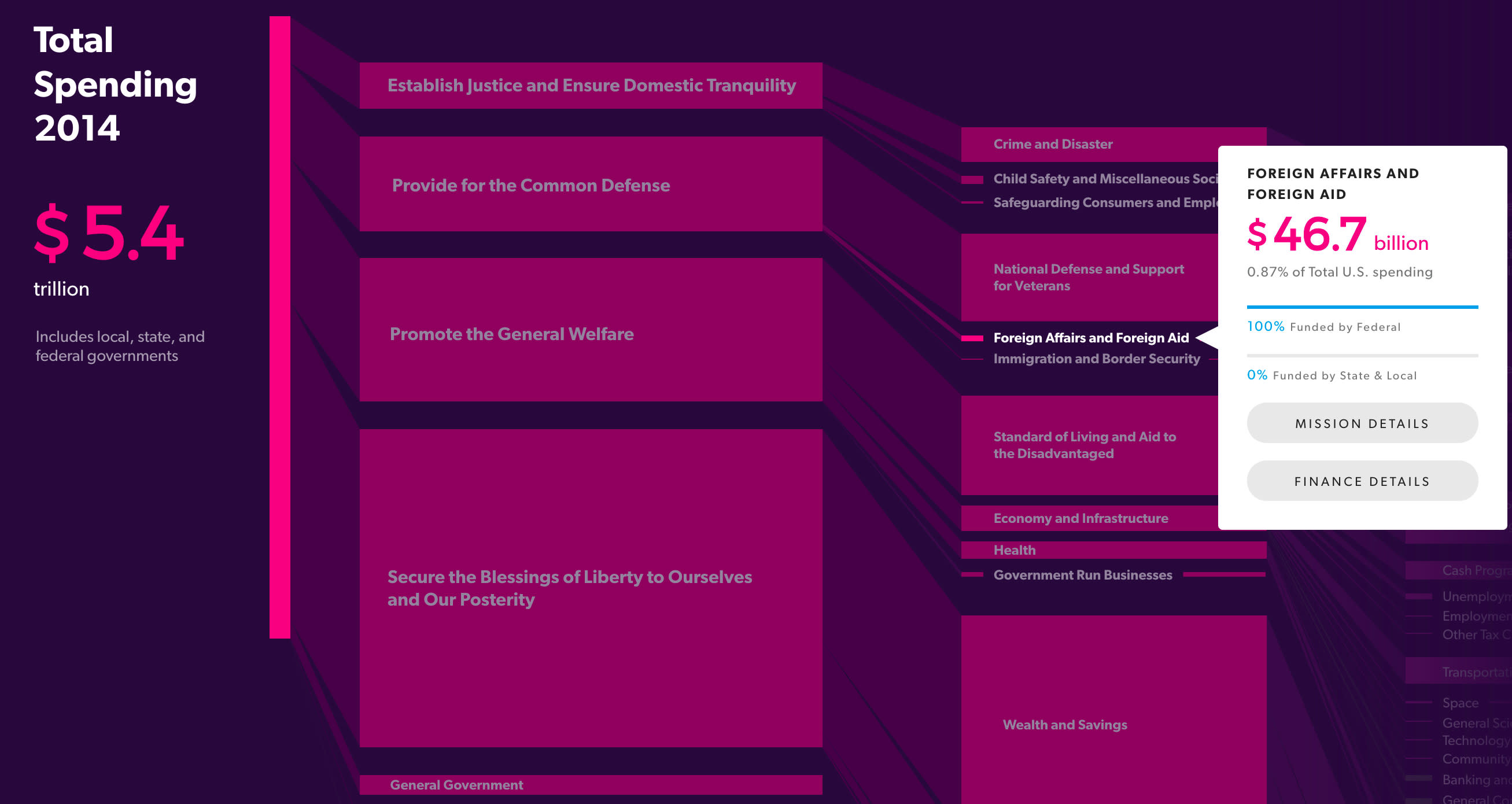 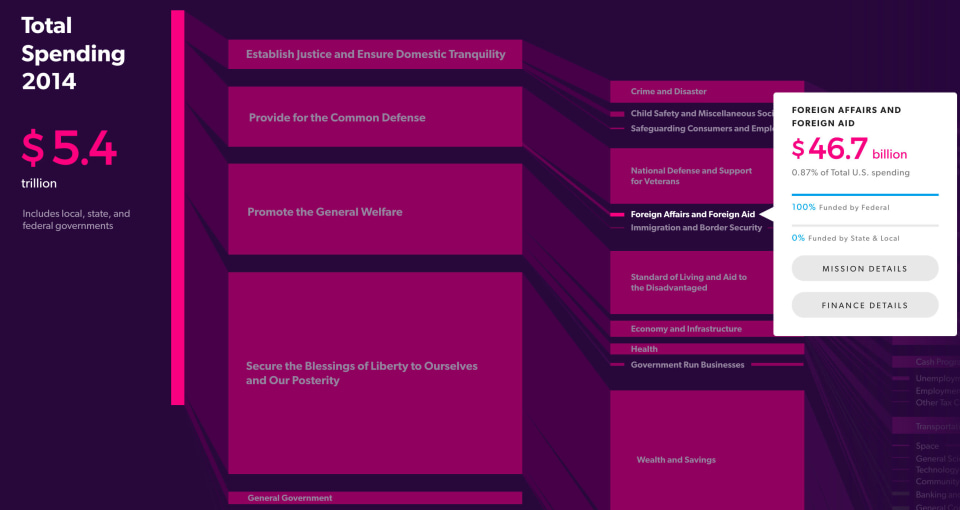 Steve Ballmer spent years at Microsoft chasing money for the tech giant to add to its bottom line, but now he's devoted to following the money the US government spends. After his retirement and conversations with his wife about what to do next, Ballmer earmarked part of his personal fortune to launch USAFacts.org. Its goal? To figure out what happens to money as it flows from our wallets into government coffers and beyond. For a man who helmed one of the greatest companies of all time and then decided he wanted to own the L.A. Clippers, stepping into the role of unbiased government watchdog sure seems strange. And yet, the end result is a strong step in the right direction.

For one, USAFacts is geared just as much toward decision-makers at (all levels) as it is for armchair policy wonks. It strictly uses non-partisan numbers provided by government agencies for consistency, rather than the forecasts that many federal agencies traffic in. Oh, and perhaps the most important thing: it's just beautiful, thanks to help from Seattle-based design firm Artefact.

True accessibility requires elegance and simplicity, and USAFacts has it -- even if it packages its findings in CEO-friendly formats like a pseudo-10-K. Needless to say, USAFacts is a hell of a tool, but it's far from the first project that has tried to cast more light onto the murky process of government spending. So why do I think USAFacts is going to be a big deal for a long time? Well, mainly because of two reasons: a clear vision, and lots of Ballmer's money.

See, Ballmer has said he looks at the creation of USAFacts as a sort of "civic contribution," and the organization adheres to a strict mission. Forget about the financial nitty-gritty the services allows you to get into — zoom out far enough and you'll find that USAFacts is basically showing people how the federal government is doing at delivering on promises. Promises codified in the US Constitution no less. It's a big goal, certainly, and one that seems crucial enough to keep the USAFacts team on-mission even if Ballmer decides to move onto the next big thing. That said, we've seen other platforms with similar philosophical aims suddenly flounder due to a lack of clear leadership and goals, financial support alone isn't enough.

Just look at the Sunlight Foundation. It launched in 2006 with a $3.5 million grant from chairman and co-founder Mike Klein and a mandate to push for open government and investigate how politics and money interact. That first influx of cash was used in part to fund 16 OpenGov grants that year, ranging from an effort to jumpstart Readthebill.org ($200,000) to providing polling data to a political blog in Connecticut ($1,600). There's no question that the Sunlight Foundation has done some incredible work over the years — my mind most readily jumps to Politwoops, which chronicles poorly thought-out tweets deleted by public officials — but things wouldn't last.

Sunlight co-founder Klein announced in September 2016 that, after a long and unsuccessful search for a new executive director, the foundation would discontinue certain projects and shutter its Sunlight Labs division. Part of the foundation's change in direction came about because one of the team's original goals — to support regulation of money and politics — was made moot by the contentious Citizens United Supreme Court decision. Sunlight still lives on as a non-profit advocate for more open government, but it's certainly not the same entity it used to be. That's where Ballmer's money and expertise comes into play.

Remember: when he resigned his post as Microsoft CEO, he was already worth around $15 billion, and his golden parachute worked out to nearly a billion dollars. Not too shabby, right? The New York Times reports that Ballmer has spent about $10 million on the USAFacts initiative so far — to put that in perspective, that's $6.5 million more than the Sunlight Foundation had to start with, and just 0.5 percent of what Ballmer paid to buy the Clippers in 2014. More importantly, Ballmer has also said that he's willing to spend "several million dollars a year" to keep the service up and running. USAFacts didn't return our request for comment so we're not exactly sure how much he plans to devote to the project in the long term. Regardless, his philanthropic largesse gives USAFacts a chance to survive in a time where we might need it the most.

To be clear, shining a light on federal finances has never been a cakewalk. Even the government got it wrong at least once (I know, what a surprise). In 2006, then-President George W. Bush signed the Federal Funding and Accountability Act, which begat a publicly available website — USAspending.gov — where regular people could attempt to figure out how the government spent its money. It wasn't exactly an eye-catching attempt, and it wasn't free of flaws either. In 2014, a Government Accountability audit revealed that numbers provided by USAspending.gov weren't telling the whole story. Federal agencies failed to report nearly $619 billion in grants and loans, prompting the GAO to report that only between "2 percent and 7 percent of the [financial] awards contained information that was fully consistent with agencies' records." Way to go.

The government eventually bounced back from that debacle with the passage of 2014's DATA Act, which expanded on the Federal Funding Act by directing the government to disclose all of its spending in a standardized digital form. All government agencies must report that standardized spending data by May 9 of this year, and all of that data should be made available to public on USAspending.gov by May 9, 2018. Sounds like a net win for transparency, but we've already seen the current administration display a concerning lack of regard for openness, financial or otherwise.

Tax returns aside, the Trump administration recently shut down Open.gov, a repository of White House visitor logs, staff financial information and appointments. We may well continue to see these important datasets evaporate, and that does the people trying to speak truth to power no good. That's why USAFacts feels so refreshing to me: it's an effort by a man who has clearly found his own success and wants to use his resources to help inform the public. In a time where the workings of the federal government seem more closed off than ever, it's refreshing to see tech magnates devoting their resources to issues that really need attention.

In this article: editorial, politics, tomorrow
All products recommended by Engadget are selected by our editorial team, independent of our parent company. Some of our stories include affiliate links. If you buy something through one of these links, we may earn an affiliate commission.