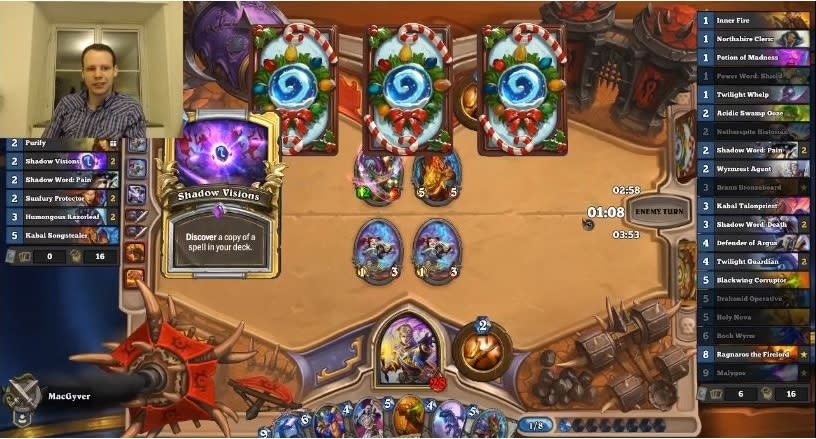 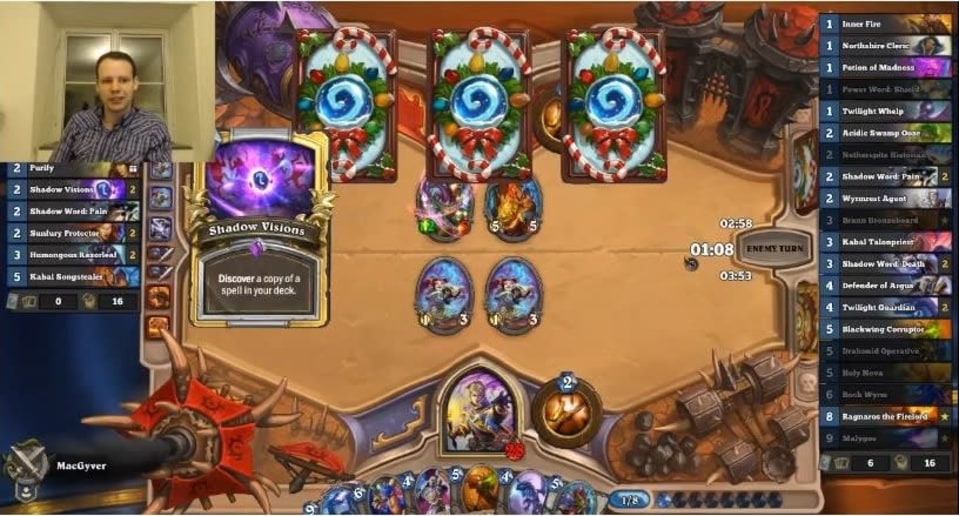 For many people, eSports cropped up when they weren't looking, growing out of the passionate local communities built by game creators and players. Professional teams now compete in high-stakes leagues for prestige, tournament winnings and lucrative sponsorship deals -- but only in places where eSports is encouraged to take root. Many countries don't offer pro game players the same ease of travel as traditional athletes, leading lawmakers to continue debating just how much the state should support the local video game scene. Such is the case with Sweden, but national Parliament member Rickard Nordin is rallying his peers to embrace the financial and cultural benefits eSports can bring, and he's reaching out to fans (near and far) on a platform fitting his mission.

Just after Parliament members from each party hold their regular Tuesday meetings, Nordin retires to his office in Stockholm's Parliament House and loads up his current favorite competitive title, the digital card game Hearthstone. As befits a legislator keen to bridge cultural and generational gaps, he livestreams his games on Twitch at 7PM CET. There he spends two hours every week fielding questions from viewers across the globe about everything from global politics to his favorite decks.

As a representative of the municipality of Gothenburg, Sweden's second-largest city, Nordin votes as a member of the country's Centre Party (Centerpartiet), which advocates for free markets and environmental protections. But when it comes to advocating for eSports, he's mostly alone, and the 34-year-old legislator finds himself educating his fellow older Parliamentarians and occasionally butting heads with opposition in the press. Bridging the generational divide means correcting the stereotype of gamers as couch potatoes, which is made all the more difficult as games become scapegoats for rising obesity levels. Instead, Nordin emphasizes the teambuilding and community that comes when players thrive in eSports' competitive atmosphere.

It didn't take long for Nordin's colleagues to get curious about his weekly broadcasts from his Twitch pulpit. The day after his initial stream on March 1st, a flurry of press coverage from Swedish online outlets had piqued their interest -- including the most senior member of the legislature. His streaming odyssey began with an announcement on the eSports subreddit before his first hour-long broadcast. By popular request, he's since tacked on an extra hour expressly in English, for those of us (ahem) who can't follow his Swedish Q&A sessions. Nordin humbly insists that you shouldn't go to his streams for elite Hearthstone tips, as he treats his streams as office hours open to anyone wondering how to facilitate eSports in their countries. While Swedish eSports fans have hosted amateur competitions and gaming gatherings like Dreamhack for years, there are things the government can do to clear roadblocks.

At the top of Nordin's list: Getting eSports professionals the same visas as those given to athletes of traditional sports. The harder it is for players to enter the country and stay for extended periods, the tougher it is to attract talent and build up local teams. That's part of the reason the United States and South Korea have become hubs for eSports. But even with supportive policies, like when the US started granting League of Legends players athlete visas in 2013, there are still legislative obstacles.

Last year, over 100,000 people signed a petition urging the United States to grant eSports players P-1 visas, a designation specifically given to "internationally recognized athletes." It began after Team Solomid's Super Smash Bros wizard William "Leffen" Hjelte was denied entry to the US for nine months, which forced him to bow out of several tournaments. The delays killed his chances to attend the 2016 Evolution Championship (Evo) last summer, which is one of the most prominent fighting game events in North America. A top-performing player who can't compete in their game's prime tournament scene isn't just cut off from potential winnings (in Hjelte's case, it reportedly reduced his income by $17,000 from 2015 to 2016). It also isolates them from competition, destroying opportunities to refine their skill. It would be like keeping a sports team out of the whole regular season and only let them in for the playoffs.

And that's in a country where eSports has received relatively significant support. To help Sweden's scene, Nordin has his eye on fixing another impediment: Taxes. Players visiting Sweden from the US pay certain rates if they make tournament money while abroad. And that's to say nothing of antiquated laws that need updating -- one of which Nordin has already taken care of.

In 2015, he helped abolish old regulations that had been on the books since the 80s. Internet cafes had inadvertently fallen under an obscure law, Automatspelslagen, which required them to pay fees and obtain legal permission to open. This had formerly allowed local municipalities to regulate the youth-corrupting pinball arcade halls that cropped up in the era, but had ended up reaching far beyond its date of relevance. Nordin aims to get eSports rooted in university education, too. Currently, the country's post-general instruction education (called 'Gymnasium') doesn't have the equivalent of an eSports major. Without, players end up prioritizing separate educational and occupational gaming tracks -- and some end up leaving to go pro.

That's what Felix Edling did. Better known by his handle "Betsy," Edling plays midlane on ROCCAT's League of Legends team, which competes in the European ring of the game's Championship Series (LCS). He'd lived in Sweden since he was a toddler but only started seriously playing video games later in high school; By 18, he left higher ed to play games professionally. Now, two years later, he's playing on a professionally-ranked team in Berlin.

That's where League of Legends' creator Riot opened a headquarters for the European LCS. Most of the region's teams have set up shop in the city accordingly: "All the teams pretty much have to stay here to compete," Edling told Engadget. With the game's professional community centered in Berlin, it would take a lot of effort -- and cost -- for a team to establish themselves elsewhere and travel to Germany for weekly matches.

"If I could play LCS in Sweden, I would. That would be perfect," Edling said, citing missed family and friends in his old home city. "For now, it's not possible, unless every team moves there and LCS as a whole moves there. But that's probably not going to happen."

For a medium played over an internet connection, competitive eSports can have a very local focus. Casual matches, on the other hand, link folks from across the world -- and more people are playing than ever. Gaming has grown beyond the nerds, the 20-year-old Edling observes: even parents are playing. That cultural relaxation around games has made it a more acceptable pastime and passion.

Nordin has noticed it, too: His colleagues in Parliament ask questions about eSports and encourage him to propose motions. There have even been Starcraft tournaments at lower levels of government. Counter to the time-wasting couch potato stereotype, Nordin believes players get real-world benefits: Gaming online, he says, increases young Swedes' English proficiency, as it's apparently the most common language used to communicate (and trash talk) on popular competitive titles.

Whether eSports should be recognized as a sport by the Swedish government isn't just a semantic debate, either. If it becomes defined as a sport, it would fall under the relevant national authority, the Swedish Sports Confederation, and be entitled to funding that is typically used to support traditional athletics. But eSports already gets funding from the private sector, says David Lega, deputy mayor of Gothenburg and former Paralympian.

"Even with our taxation level, it's impossible to support everything," Lega told Engadget. "eSport [players] have a huge advantage compared to many sports in Sweden because they are getting professionally noticed and increased sponsorship interest by private companies."

Lega opposes moving eSports under traditional sports' umbrella. Lega has sparred with Nordin in the opinion pages of Svenska Dagbladet, and his position is firm: Sports require physical activity. Gaming's sedentary nature means the extended competitive play sessions that eSports requires isn't something to encourage while children's obesity continues to rise, Lega told Engadget. Children should be motivated to move.

Not that Lega considers eSports to be valueless, he enjoys gaming on his PlayStation 4 and Xbox One. But like chess, he considers it a mental skill, not physical.

"Don't get me wrong, it takes a lot of skill to be a successful eSporter and a lot of training, but it doesn't have physical exercise. It's a new way to learn how to adapt to a group, to grow with other people and to get better -- so it's important," Lega told Engadget. "But it's not a sport in Swedish ways. I want to see more kids playing eSports, but I want to see them run, too."

Unfortunately for Nordin, the Confederation seems to be thinking along the same lines.

"Just today there was a verdict from The Swedish Sports Confederation, that the application from eSports to become a member has been re-scheduled 'til 2019 and that they will rework their statues 'til then," Nordin told Engadget via email. "That sounds to me like they will do all they can to keep them out. That's outrageous and the benefits The Swedish Sports Confederation has today with the rights to decide which educations get to be started and so on has to be changed. So there are many fights to take in the parliament on the behalf of eSports right now."

Nordin's reception on Twitch, on the other hand, has been almost completely positive. Initially wary of fielding questions from random internet users, he's continued streaming every week, holding court for an hour each in Swedish and English every Tuesday on his channel. Questions are usually split 50/50 between gaming and politics: Some ask about his take on Russia and North Korea, while others ask about his Renolock deck. Just fielding inquiries satisfies his goal to make both internet gaming and statecraft more accessible.

"If I can lower the threshold for people to take an interest in eSports, I've done enough. They don't have to be interested in my party; no matter what their opinions are, one of my goals is to lower the threshold and enable more people to discuss politics," Nordin told Engadget. "It's good for society to have open discussion."

That means committing to the long run. He doesn't expect to immediately change minds -- or legislative priorities, though he does have some more motions pending that haven't been up for debate yet. But he does see eSports as a rising tide that it would behoove his peers, and politicians at all levels, to begin understanding.

"One of my core messages to my colleagues is that this is not going to go away. It's going to get bigger and better. It's much better to be a part of it," Nordin said. "Change always takes a while, especially at the national level. But that's part of the game."

In this article: av, blizzard, gaming, gothenburg, hearthstone, politics, RickardNordin, streaming, sweden
All products recommended by Engadget are selected by our editorial team, independent of our parent company. Some of our stories include affiliate links. If you buy something through one of these links, we may earn an affiliate commission.