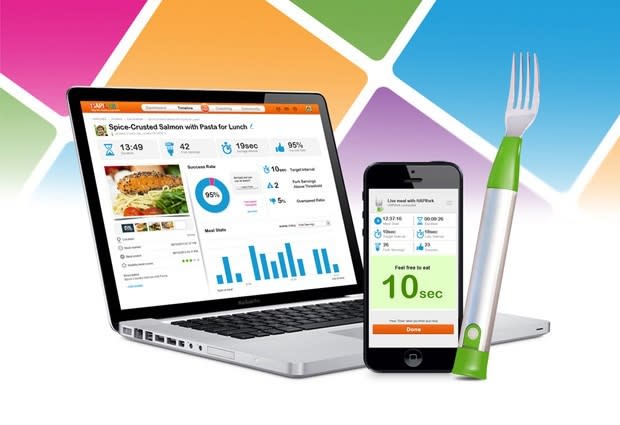 The weight loss world is full of plausible-sounding advice. We've got apps to count calories, smart scales that measure our body fat and even vibrating utensils that promise to slow our eating down. The problem is really knowing which gadgets work and which are just as much empty fluff as a jar of that marshmallow stuff. Unfortunately, those vibrating forks seem to fall under the latter category, according to a new study published in science journal, Appetite.

The study, titled "The effect of real-time vibrotactile feedback delivered through an augmented fork on eating rate, satiation, and food intake," found that even when a smart fork slows people down when eating, it won't result in eating less. People assigned the vibrating fork ended up eating a bite or so per minute less than the control group, but each cohort ended up eating the same 1.7 pounds of pasta bolognese during the time period measured, according to The Verge. That's a lot of pasta, slowly consumed or not. Still, the study only tested eating patterns over 10 minutes — half the time other researchers say it takes for your body to feel the food in your stomach — so it's hard to call the results utterly conclusive.

The myth that eating slowly will help you lose weight continues to persevere, however, even with quite a few studies saying the opposite. Smart devices like the HAPIfork may indeed help you eat more slowly, but perhaps not slowly enough to make a difference in the amount you eat. If the current study's conclusions are true, then vibrating utensils may only be as useful as that fitness tracker you never wear.

In this article: food and drink, food-and-drink, foodanddrink, gadgetry, gadgets, gear, HAPIfork, science, study, weightloss
All products recommended by Engadget are selected by our editorial team, independent of our parent company. Some of our stories include affiliate links. If you buy something through one of these links, we may earn an affiliate commission.