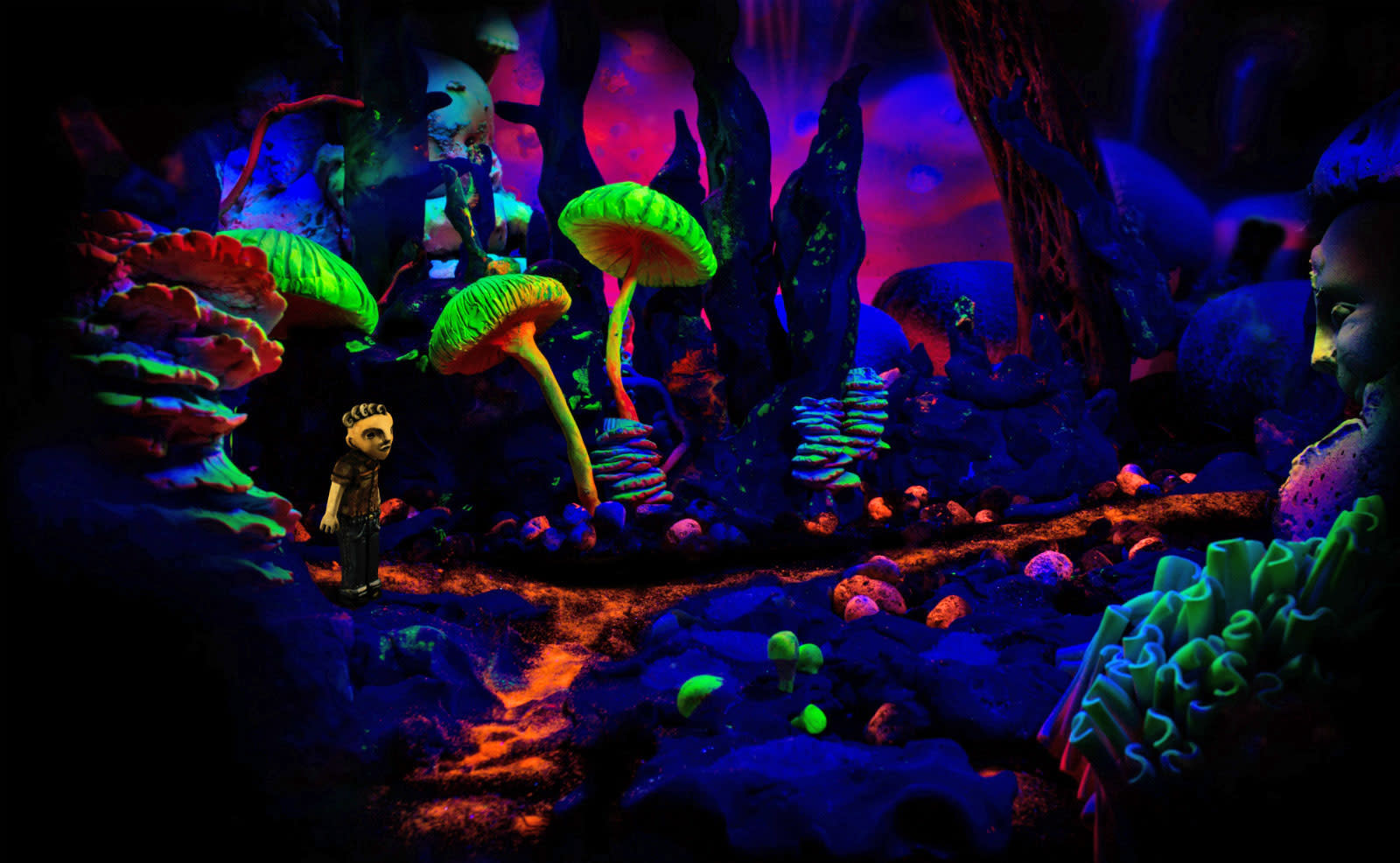 The eerie stop-motion game that's 'better than sex with Jesus'

When I first talked with Anders Gustafsson and Erik Zaring in 2012, they promised their creepy, psychedelic, stop-motion game, The Dream Machine, was going to be "better than sex with Jesus." They had a lot of work ahead of them -- they were building the game by hand, with physical materials, and the stop-motion process was inherently time-consuming. Plus, they had to wrangle episodic installments of an intimate yet sprawling story inspired by LSD trips and theories of alternate realities.

Five years later, as the sixth and final installment of The Dream Machine finally lands on Steam, I ask Gustafsson and Zaring if they think their game delivers on its sacrilegious promise.

"I think we under-promised and over-delivered as far as sexual congress with the lord and savior is concerned," Gustafsson says. "Playing The Dream Machine is clearly better than that. The Dream Machine is more like being baby Jesus, on Christmas Eve, just lying there in the crib, toasty warm, getting gold and myrrh poured all over yourself, then realizing people will still be celebrating this very moment 2,000-plus years into the future."

This is how Gustafsson and Zaring approach game development: with a dry humor that pushes the boundaries of what's accepted, what's traditionally done. The Dream Machine is an award-winning testament to this perspective. It's a point-and-click adventure game following a newlywed named Victor as he moves into a mysterious apartment complex and discovers a literal machine that infiltrates the dreams of people all around him. His wife falls victim to the machine and Victor fights to shut it down the only way he knows how -- by solving puzzles in the connected dreams all around him.

In the fifth episode, Victor explores the minds of two neighbors: One a Tron-like digital space and the other a mossy forest filled with mushrooms, fairies and a thief who steals the villagers' organs while they sleep. The Dream Machine is an exercise in balance, blending the macabre with beauty and comedy.

The game's tone is inspired by the drug-fueled exploits of famed neuroscientist, author and philosopher John C. Lilly, and it plays like a page ripped out of House of Leaves. This isn't a game about shock value, though -- it's smoothly paced and introspective, transforming extreme, drug-addled inspiration into an eerie and beautiful fantasy world.

Back when he was in animation school, Gustafsson became enthralled by Lilly's experiments with LSD and Ketamine, and his attempts to draw the human subconscious. Lilly believed he visited an alternate reality while he was tripping, and he was determined to map out its geography. He kept a pen and paper beside his bed so he could jot down coastlines and landmarks as he came down, and he encouraged his friends to do the same.

"They believed that if they had enough of these drawings, they could start piecing them together in an effort to create a coherent chart of the human subconscious," Gustafsson says. "I thought that was one of the best ideas I'd ever heard, beautifully concrete and wonderfully naive. I just had to make something of it. In the game we treat dreams in a similar fashion."

The Dream Machine was episodic before episodic gaming was cool. Gustafsson and Zaring launched the first installment in 2010, nearly two years before the debut season of Telltale's The Walking Dead, the series that thrust episodic games into mainstream consciousness. But, The Dream Machine had a slower update cycle than other episodic games, largely because of its daunting stop-motion process. Luckily, Zaring already had expertise in this field -- he ran a stop-motion-animation studio in Sweden. At first, Gustafsson was hesitant to build a handmade game, but Zaring convinced him it could be done by crafting four or five miniature sets in a single night. They got to work shortly afterward.

The Dream Machine came to life on a workbench the size of a standard Ikea desk, so set space was limited. The developers at times had to cheat, using Photoshop to create depth in some scenes, and any major set or story changes had to be carefully considered.

"I sometimes miss the possibility to build really vast landscapes or to be able to easily multiply trees or whatnot," Zaring says. "Of course, you can achieve a lot by using Photoshop, but sometimes I kind of miss other mediums such as good ol' 2D or 3D. We also ended up with a physical look that can be a tad overwhelming at times, all the wrong angles and imperfections makes me a bit tired."

But those imperfections are a large part of The Dream Machine's unsettling charm. The developers used a vast array of physical media to build these imperfect angles; Zaring lists a handful of the game's strangest materials: pubic hair, broccoli, the skull of an elk, dried peas, pasta penne, pork trimmings, baby tomatoes, tonic water, lichen, driftwood and condoms. Despite nearly a decade of development and a difficult medium, Gustafsson and Zaring say they never felt the urge to give up on The Dream Machine. Quitting simply wasn't an option.

"Once we started selling the whole game -- after Chapter 1 and 2 were finished -- that option was taken off the table," Gustafsson says. "If we'd bailed after that, the game would be seen as a scam. That would be our legacy. We'd be those guys."

Now that the journey is complete, Gustafsson and Zaring are mostly just excited to see their completed masterpiece out in the world. Mostly.

"I feel both sad and elated at the same time," Zaring says. "I'm not even sure if I'm going to be the same person when this baby is finally delivered. However, there is quite a lot of stuff to do post-release that'll keep me busy and keep my 'postproduction depression' at bay."