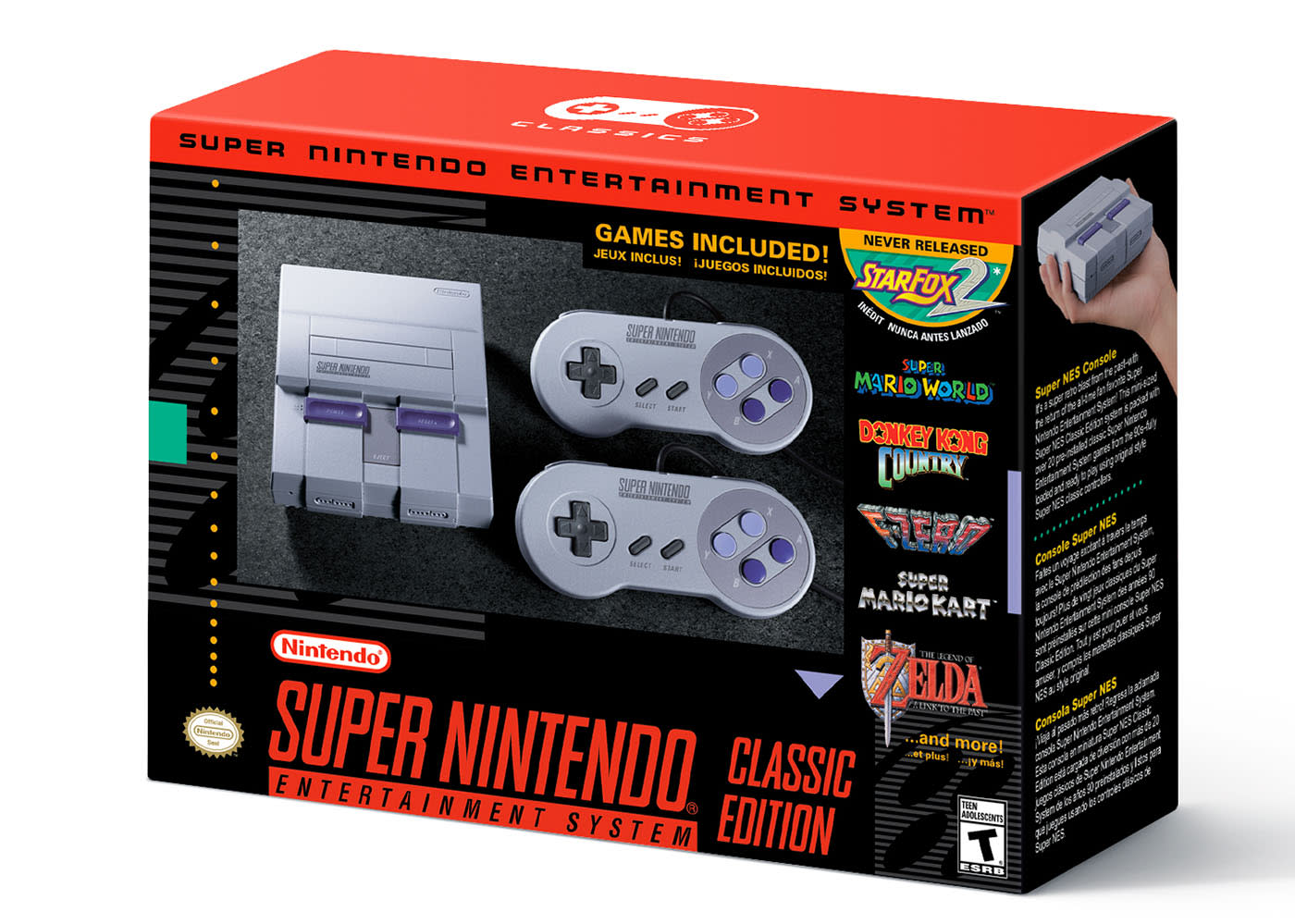 Before Nintendo unveiled the Switch, its new hybrid game console, to the world, it rereleased an old one. The NES Classic Edition was an adorably small box of nostalgia packed with some of the best games for Nintendo's original home console. Now the company is doing it again -- on September 29th, the Super Nintendo Entertainment System Classic Edition will put games like The Legend of Zelda: A Link to the Past, Donkey Kong Country and Mega Man X back in the living room. Hopefully, it'll do that while improving on the faults of Nintendo's first throwback machine.

Truth be told, there wasn't a lot wrong with the NES Classic Edition. With 30 of the original console's best games pushed to modern TVs over HDMI, it offered an excellent, easy-to-use retro-gaming experience. Still, it had its flaws. The console's ridiculously short 2.5-foot controller cables forced players to sit uncomfortably close to their TVs, for instance, and a few user-interface flubs made the menu weirdly difficult to access. With the SNES Classic, Nintendo has a chance to learn from its mistakes. Here are a few simple ways the company's new retro console can improve on the original's failings. This one is an easy fix. The NES Classic Edition's unnecessarily short controller cables made using the retro console feel weird and uncomfortable. Sitting 3 feet away from the TV screen may have been fine back in the early '90s, but today, most gamers would prefer to play their games from the comfort of a couch. The SNES Classic needs to have controllers that can reach across a standard-size living room with ease. And indeed, early reports from Nintendo suggest the new controllers will be longer -- but if Nintendo gives players the option to sit back and game comfortably, it'll have to fix the NES Classic's other big flaw, too:

As awful as the NES Classic Edition's short controller cables were, they had a single upside: They ensured the player was always within arm's reach of the console's reset button -- which was the only way one could access the system menu to change games or save and load restore points. It was a choice that felt like a glaring design oversight, particularly when you learned that Wii Classic Controllers and third-party gamepads could call up the menu with the touch of a button. Adding a home button to the SNES Classic controller (or using a button combination to call up the menu) would go a long way toward creating a more user-friendly retro-gaming experience.

Put game manuals on the console Old video-game-instruction booklets are like little time capsules -- they're filled with gorgeous artwork, expanded story information and often, essential gameplay tips. The NES Classic had a menu option for game manuals, but it just brought up a QR code for accessing them online. Considering some of the games on the Classic couldn't be completed without hints in the manual (read: Startropics), it was a bit of a letdown to find they weren't technically included with the console. Making manuals natively accessible in the SNES Classic Edition menu would be a nice upgrade.

As great as Nintendo's throwback NES console was, it still felt limited by its library. Yes, the 30 games the Classic came with were all great, but if your favorite game wasn't already part of that library, it never would be. At least not officially. Giving buyers a way to add more games to the SNES Classic Edition would increase its value exponentially. Nintendo would just need to add a wireless radio or a companion PC app that could download games to the console over USB.

This upgrade is even more important for the SNES Classic, which comes with fewer games built-in than its predecessor. Sure, the SNES Classic has four times as many RPGs -- ensuring hours upon hours of playtime -- but 21 games just doesn't feel like enough. Don't count on getting a library upgrade, though. Like its predecessor, the SNES Classic is probably designed to have a short shelf life, which brings us to the Classic Edition console line's biggest problem:

Make enough consoles for everyone Despite being a nostalgic toy designed just for the holiday season, consumers responded to the NES Classic as if it was a brand-new, fully-fledged game console. Lines stretched around corners outside of electronics stores, and scalpers hoarded the consoles for later sale on eBay. Supply of the NES Classic never caught up with demand, and Nintendo pulled the product from market less than a year after it launched.

For most fans, this was the biggest point of contention -- Nintendo had created something they desperately wanted, but made it almost impossible to obtain. The company put out statements acknowledging the demand, and then canceled the product in response. The SNES Classic's outlook appears only marginally better: Nintendo says it plans to produce more of the console than its predecessor, but won't commit to continuing production past the end of 2017.

At the end of the day, we know that if Nintendo fixes none of the NES Classic's faults, its Super Nintendo follow-up will probably still be a hit. It has 20 of the SNES's most popular and iconic games built into it, plus Star Fox 2 -- a sequel that was mostly finished in-house, but never made it to market. It's already destined to be a highly sought-after collectable, and a worthwhile prize for anyone who picks one up. Assuming, of course, they can find one.

In this article: av, console, editorial, gaming, gear, nintendo, snes, snesclassicedition, superfamicom, supernintendo, supernintendoclassicedition
All products recommended by Engadget are selected by our editorial team, independent of our parent company. Some of our stories include affiliate links. If you buy something through one of these links, we may earn an affiliate commission.