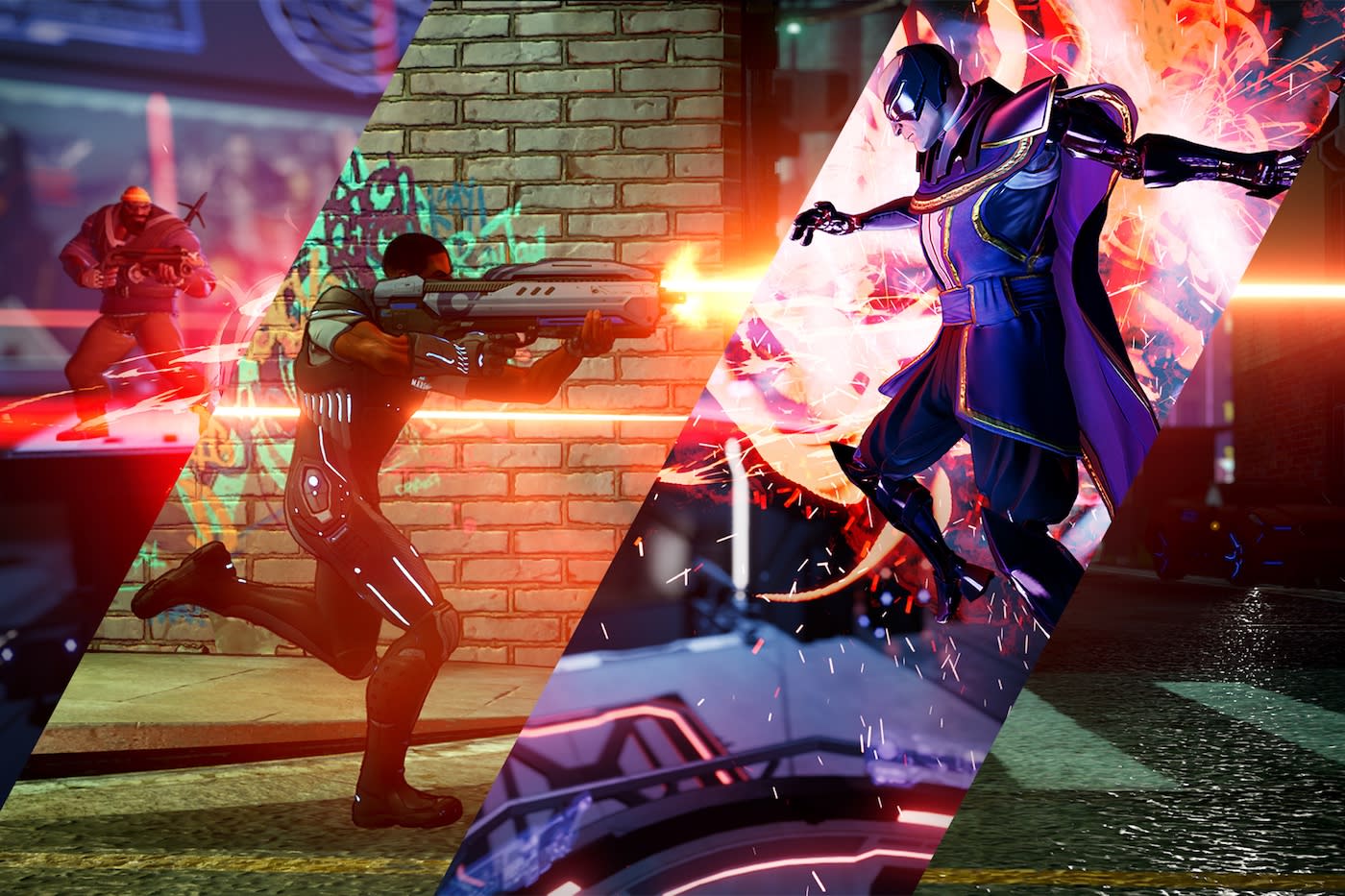 Microsoft's biggest hurdle with Crackdown 3 isn't its rumored troubled development cycle, it's that Agents of Mayhem exists and is coming out first. Both share a similar premise: You're a superpowered human given free reign over a cartoony open world. There are plenty of physics-based shenanigans that result from shooting harpoon rifles at snipers and black hole guns at gang members in both, and each has a familiar structure of taking out a crime syndicate from the bottom up.

The difference lies in the execution: There are a lot of cooks working on Crackdown 3 -- some brand new to the franchise -- while Mayhem's team is a group of seasoned open-world veterans.

Crackdown 3 is being developed by two studios. Dave Jones (who steered the ship on the first game) and his team at Reagent Games are handling multiplayer while Sumo Digital is shepherding work on the campaign mode. The latter has existed as a gun for hire since 2004, working primarily on racing games, with projects like Little Big Planet 3 and the now defunct Xbox Fitness sprinkled in here and there.

I wasn't able to speak with anyone from Sumo at Microsoft's showcase event during E3, but Clint Bundrick, the game's design director at Microsoft, excitedly told me how Sumo was playing to its strengths and would be focusing heavily on the driving skill. He said that in the original Crackdown it felt like a forgotten part of the four core gameplay tenets: parkour, melee attacks, explosives and driving.

He wasn't wrong. Driving was the last thing I focused on after finding all the agility orbs I could a decade ago. But once I maxed the driving skill, my Agency Supercar basically became the Batmobile from Batman: The Animated Series, with chain guns tucked into the fenders and a wedgelike front bumper that sent cars flying when I rammed them head on. It was awesome, and I wish I'd worked on beefing up the skill earlier. "We push way beyond that," Bundrick told Engadget. "The transforming we really wanted to double down on. We want to make people feel like that was an extension of their arsenal, that it gave them more toys and more tools." Considering Sumo's resume, it makes sense for the studio to focus on the driving element.

I just wish I could've experienced some of it; the restricted section of the game map I saw didn't allow for any sort of driving at all. Bundrick teased a future reveal for that, so it's safe to expect evidence of it at the next big trade show: Germany's Gamescom in August.

What I played of Crackdown 3 thematically felt a lot like Saint's Row IV: a missed attempt at recreating something another studio had already done. The basics were in place, but there wasn't much new to see beyond that. Instead, I was trapped in a claustrophobic section of a new setting, Pacific City, as part of an offline, single-player "skills for kills" mini game.

The goal was to off as many faceless enemies as possible in a smallish area in 10 minutes, using weapon drops, explosive red barrels and whatever else I could find. Of course, there were a few tall buildings to scale and agility orbs to collect, so I could jump higher and across bigger distances, but given the short nature of the demo and cozy play space, it didn't actually feel like I was progressing. Bundrick empathized and said that the full game will be much more of the sandbox players are familiar with.

What I adored about the original was also missing. The demo felt constricted and like I was fighting the floaty physics and weapon targeting as much as the cel-shaded enemies. New bits like being able to double jump or midair dash seemed haphazardly shoehorned in to a decade-old framework.

That's to say nothing of how light the agent I played as felt. In the original, your cypher had a believable sense of weight and presence in the world. That wasn't the case here, and when I asked Bundrick about this, his answer didn't inspire a lot of hope. He said that the game was still in development and that what I'd played was a pre-alpha build. He mentioned that at its heart, Crackdown is a 3D platformer (think: Assassin's Creed II) and this installment still needs to feel like one. Conveying a sense of weight is difficult but vital for success in the genre, he explained.

Make the hero too heavy and you wind up with an avatar that feels unresponsive. Too light and the character feels incredibly twitchy, like the agent did during my demo. 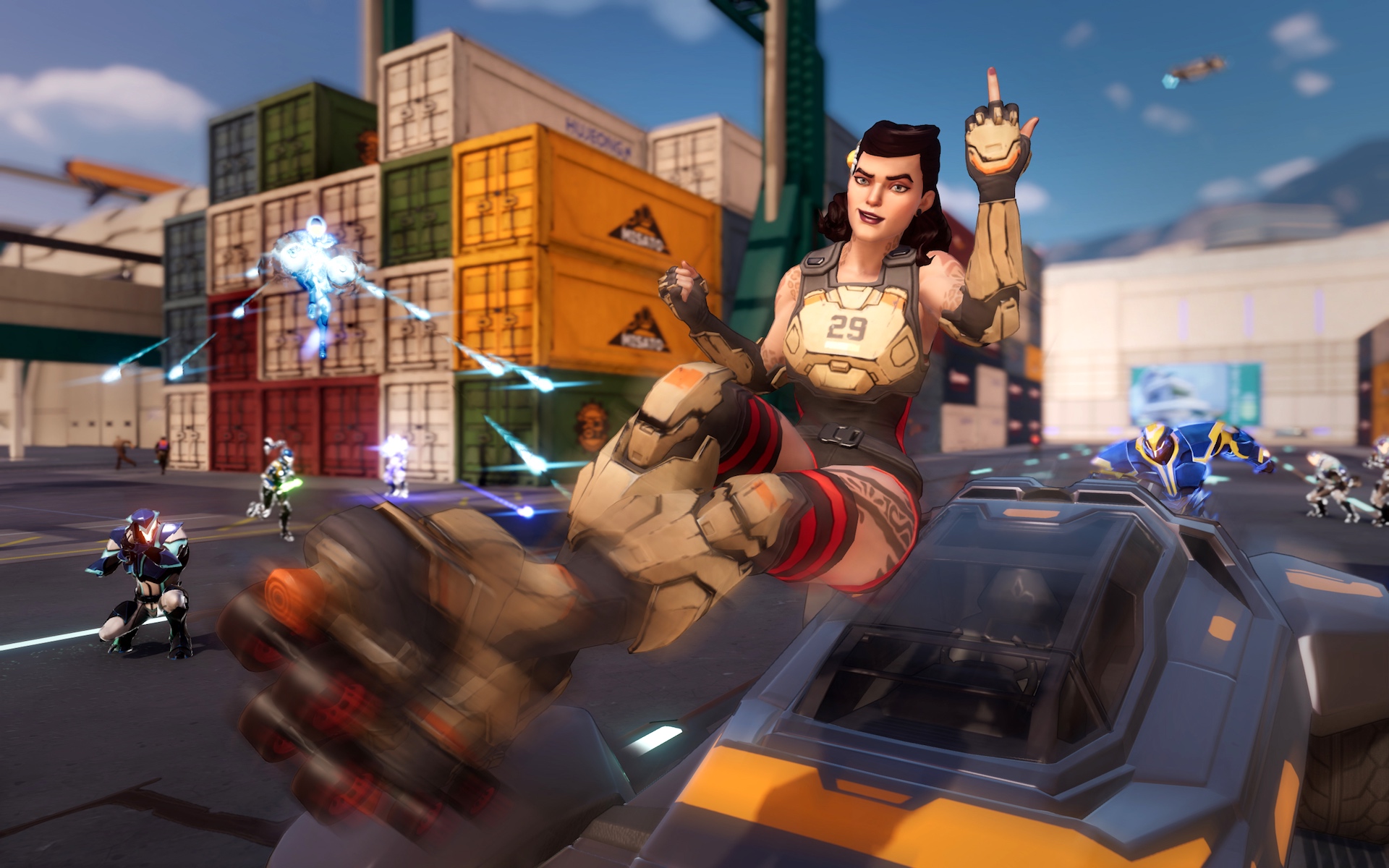 "A lot of the games do both of those well, and Crackdown is a game where you want to feel meaty, you want to feel physical; you want to feel heavy," he said. "But you're also kind of a bionic flea jumping through the air and doing all this crazy stuff. So it's all those tiny details and you continue to work on those all the way throughout."

Yes, this was a very early build of the game, but there was no evidence of something as fundamental as player animation being a focus or that the work Bundrick described was a priority -- especially considering that he compared agents to being bionic fleas. There's every chance that what I played was a bad or old demo. Those sort of things happen, but Bundrick's response was more than a little concerning for a game that's in the final stages of development ahead of its Nov. 7th street date. For now, I'm cautious, having been burned before.

As it stands, the brief portion I played felt like a kid awkwardly slipping into her parents' clothes, trying to pass for her mom. The closest thing Sumo has made to this type of open-world game was the Colorado level of last year's Hitman reboot. It showed.

Meaning, while Sumo has to work just to get the basics of its 10-year-old predecessor established (we're not going to talk about 2010's awful Crackdown 2 from Ruffian Games), Deep Silver Volition can build on the foundation of 2013's flawed Saint's Row IV. The Illinois-based team has been making open-world games exclusively since 2006's Saint's Row for the Xbox 360, and its confidence was tangible everywhere I looked.

"This is our wheelhouse, right?" producer Kate Nelson asked during my Mayhem demo at E3. "We know open-world games."

Saint's Row IV experimented with the Crackdown formula of collecting power-ups around a perpetually nighttime city to upgrade things like your avatar's flying power. But unlike Crackdown, advancing those less-than-thrilling skills didn't happen in real time; they were basically experience points you used to manually upgrade a set of abilities. It was a far cry from the instant gratification of suddenly being able to jump higher or seeing the cab of a semitruck transform into a nitrous-powered battering ram once you got behind the wheel.

Those still exist in Mayhem, but the powers you boost with them are so over the top that maybe the upgrade system won't be as annoying. Specifically, the Saint's Row spin-off adds Bayhem-esque abilities and super attacks (e.g., Ball Pit, which encases enemies in giant bouncy balls and sends them flying into the air). That's on top of a massive city to explore and an authored narrative dripping with Volition's trademark charm and wit.

Cutscenes are fully voice-acted, and there's constant chatter among you, your two asymmetrically skilled squad mates and agents back at home base. One of the missions has an internet-porn-obsessed Justin Bieber stand-in to investigate and then eliminate, for instance.

That's not to say there weren't issues here and there. Double jumping over elevated ledges didn't work 100 percent of the time, there were tons of menus to sift through to pick my various powers and abilities, and the targeting system wasn't as tight as I'd have liked. With how well everything else performed, though, I'm hopeful these can be addressed by the game's ship date on Aug. 15th.

What's more, during my half-hour gameplay session, it felt like I was peeling back another layer of the game's mechanics every few minutes, with even more to find hidden around the next corner (or an in-game moped). It's dumb fun but with a surprising amount of depth.

Given Volition's legacy, though, maybe the level of depth and personality shouldn't have caught me off guard. After all, this is the studio that beat Rockstar Games at its own, err, game with Saint's Row: The Third by embracing the absurdity of the medium, versus the way Grand Theft Auto IV buried the lede behind hours of exposition and countless gameplay tutorials.

Mayhem doesn't suffer from Crackdown's forced "extreme" personality either. Its tone is earnest, and its laughs are well-earned. Characters felt distinct from one another in terms of abilities, personality and weight too. Nelson attributes the latter to the combat and animation teams sitting side by side. It's the type of thing that ensures the two disciplines exist in concert so you always feels like a superhuman whether you're running and gunning or doing a belly flop from the top of a building.

This was Mayhem's second E3, though, and last year's demo was as controlled as Crackdown 3's was this year. A few minor polish issues aside, however, and it's shaping up to be one of the zaniest and deepest games of 2017. I may have sworn and screamed when Terry Crews appeared during Microsoft's keynote to introduce Crackdown 3, but that excitement waned when stuttering gameplay appeared on-screen 30 seconds later. Now I'm screaming and swearing for an entirely different reason -- because I have to wait two months until I can play Agents of Mayhem again.

In this article: agentsofmayhem, av, clintbundrick, crackdown, crackdown3, davejones, deepsilver, deepsilvervolition, e32017, gaming, katenelson, microsoft, reagent, reagentgames, sumodigital, video
All products recommended by Engadget are selected by our editorial team, independent of our parent company. Some of our stories include affiliate links. If you buy something through one of these links, we may earn an affiliate commission.