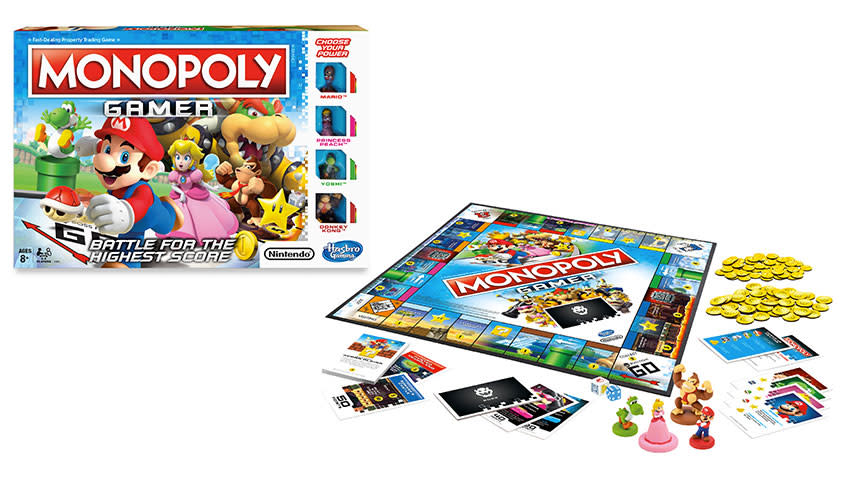 If there's one thing that Super Mario Bros. and Monopoly share, it's their innate ability to engender family arguments in otherwise placid households. Which is why it's such a delight to see the pair reunited in the new Gamer Edition of Monopoly, thanks to a partnership 'twixt Hasbro and Nintendo. Unlike previous Mario-themed versions of Monopoly, the rules here have been tweaked to offer a twist on the traditional formula.

In place of the steamship and iron play pieces, you'll roam around the board with tiny versions of Mario, Peach, Yoshi and Donkey Kong. Each one is also capable of gaining their own specific power-up abilities, such as enabling Princess Peach to collect rent from the bank when she lands on a super star. Which is, apparently something you'll want to do when playing the world's least-liked board game in 2017.

Should you desire the Gamer Edition of Monopoly for your collection, it'll be available for $25 at various retailers in August. In addition, you will be able to pick up Power Packs that include additional character figures, such as Luigi, Boo and Wario, for $3 a piece, because real-world DLC is a thing we all love.

In this article: GamerEdition, gaming, Hasbro, home, Monopoly, MonopolyGamerEdition, Nintendo, SuperMario
All products recommended by Engadget are selected by our editorial team, independent of our parent company. Some of our stories include affiliate links. If you buy something through one of these links, we may earn an affiliate commission.