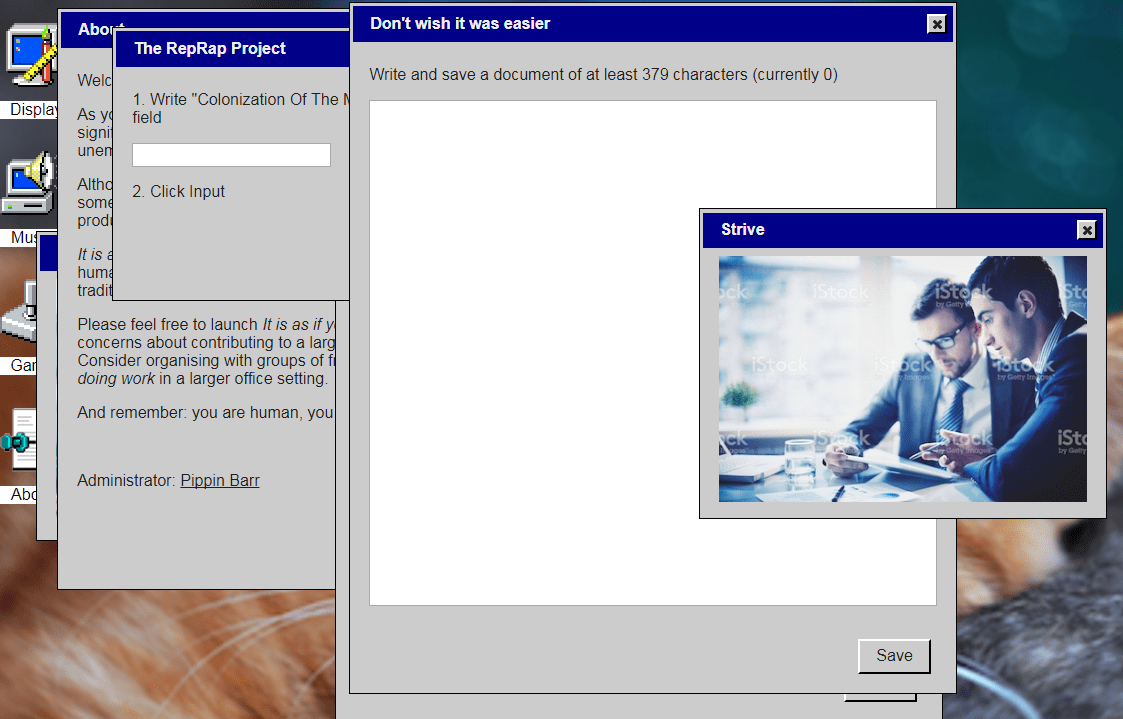 Video games can be hard work. With all the grinding, stat chasing and repetition that defines many modern games, sometimes toiling away in a virtual world can feel like a second job. Well, it seems like for design professor Pippin Barr this hasn't gone unnoticed, as he's taken the concept of digital busy work one step further. In his latest game It Is As If You Were Doing Work, players find themselves logging in to a brilliantly realized Windows 95 backdrop as they're tasked with clicking boxes and doing completely pointless 'work'.

It's wonderfully inane, seeing you promoted to positions like 'Senior Administrator' simply for clicking boxes and writing gibberish. After a while you're even rewarded with a little break, allowing you to treat yourself to playing a Pong rip-off or listening to some brilliantly rubbish MIDI tunes.

Speaking to The Verge, Barr explains that the idea for the game came about when he was thinking about a future where automation has eliminated the need for most current jobs. "The game poses as an application that humans who have been put out of work by robots and AI can play as a way to recapture the sense they once had of doing work and being productive," writes Barr. "It's a kind of semi-condescending service offered by this new world to those of us who can't deal with it."

If that concept sounds at all familiar, that's because Job Simulator is based on something very similar. Set in a future run by robots, the motion-controlled VR games sees players hilariously try and recreate working life as completely clueless robots.

This bizarre little browser game is free and can be played here. Be careful though, as playing it for too long might put you behind on your very real (and hopefully more meaningful) work. Now if you'll excuse me, I have fake dialogue boxes to click.

In this article: av, gaming, JobSimulator, parody, pc, Windows95, work
All products recommended by Engadget are selected by our editorial team, independent of our parent company. Some of our stories include affiliate links. If you buy something through one of these links, we may earn an affiliate commission.