'Hope Floats' is a seaborne bot that spams lawmakers with calls

All in the name of art (and democracy).

On a plain white wall at a large Brooklyn gallery, a seemingly old-fashioned phone booth sits about five feet off the ground. The words "Hope Floats" are painted in white on the black box, which houses a computer, a screen, a keyboard and a handset. It's a nondescript façade for a potentially subversive art-meets-tech project. Hope Floats is a two-part interactive installation that encourages you to pick up the phone and make your voice heard, and it is also a commentary on the aging technology that powers the American political system.

The project started out as a reaction to the 2016 US presidential election. "Right after the election, we were strapped with wanting to provide something to our community (in Red Hook) and our audience ... People needed to get stuff out," says Bethany Tabor, technology programs manager at Pioneer Works, the nonprofit foundation behind Hope Floats. At first, the idea was to build something cathartic. "We wanted to just build a screaming booth where you could go in and scream," added David Sheinkopf, the organization's director of technology.

But Sheinkopf wanted to encourage what he called "constructive expression" instead of futile yelling, so the team decided to develop something more effective. So they set about building a phone booth for people to call their elected officials. 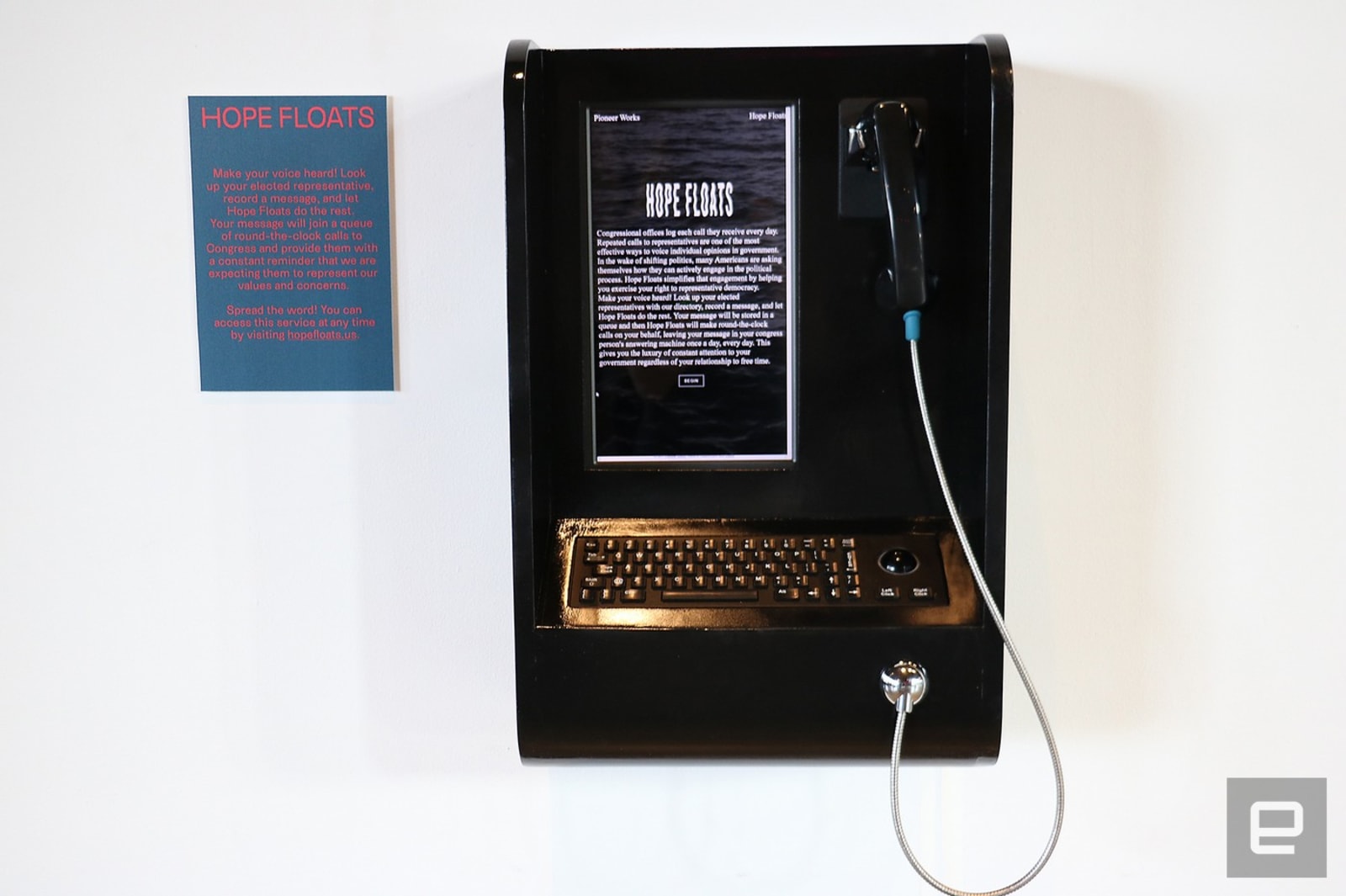 That's the first part of Hope Floats, which launched online and in physical form this past Sunday at Pioneer Works' monthly open house, which happens every second Sunday. As hundreds of New Yorkers wandered around the bright, airy gallery, the installation was actually quite easy to miss. Aside from a small sign next to the phone booth, there wasn't an eye-catching setup to draw your attention to the installation. Still, several people stopped to read the project's on-screen explanation, while a handful of them stayed to leave a message.

If sending your representative a note is something you prefer to do in private, you can also do so on the Hope Floats website. The physical phone booth lets people without internet access use the service. Sheinkopf pointed to the neighborhood's elderly population as an example.

Only one phone booth is up and running at Pioneer Works right now, but Sheinkopf says the dream is to have phone booths that are solar-powered, with 3G or 4G LTE connections via a mobile hotspot so they can be installed "in the public space." The setup is already weatherproof, making it a good fit for parks and sidewalks. The team's ability to bring Hope Floats to more places depends on whether it gets enough sponsors. 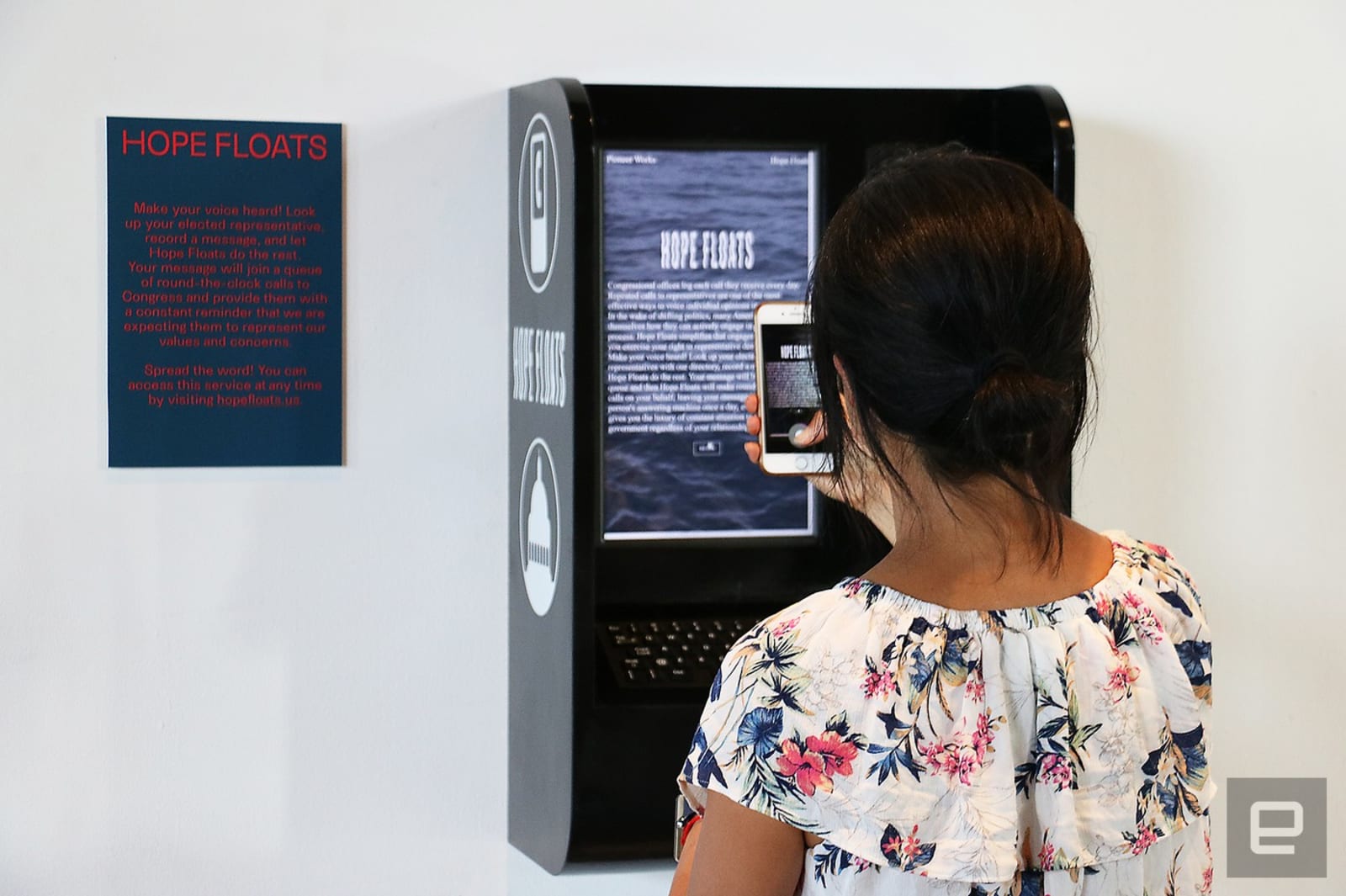 Whether you make the trek out to Red Hook or see one in your neighborhood in future, placing a call via a Hope Floats booth is like entering a time warp. The device is anachronistic and somewhat confusing. The 15-inch screen is accompanied by a receiver on the right and a keyboard-and-mouse combo below it that evoke public phones from decades ago. Some people reached out to touch the screen last Sunday, and it took them a while to figure out that they actually had to use the accompanying mouse to navigate the menus.

At the booth, you can look up your district congressional representative, select a cause to discuss and leave a voice message for them. Tabor and Sheinkopf say they wanted to make Hope Floats a nonpartisan project, and as such, they tried to avoid leading questions or slanted scripts. Topics include immigration policy, travel bans, women's reproductive healthcare, trans rights and NEA advocacy. There's also an umbrella option called "Other" if your issue isn't on the list. 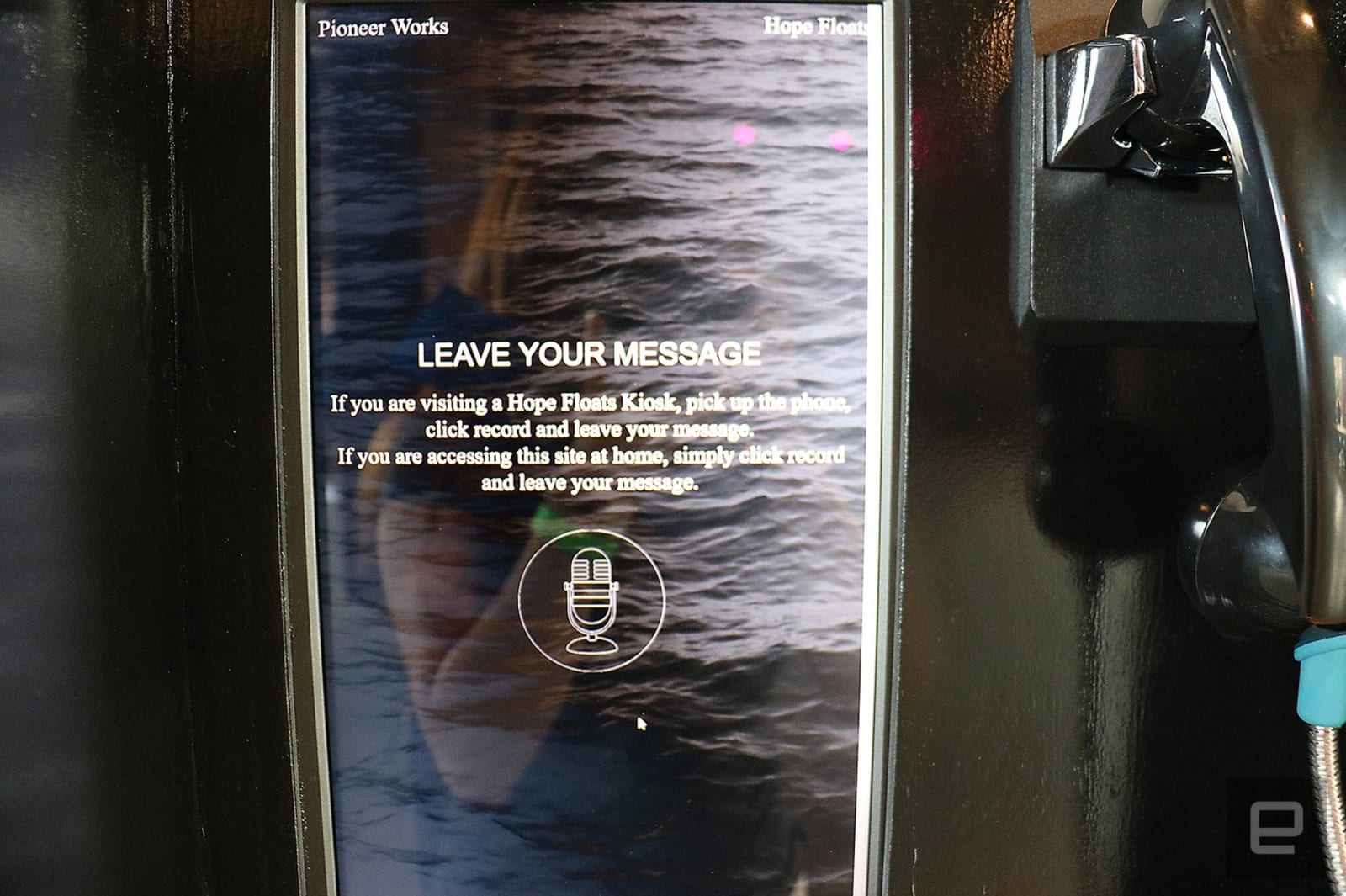 Leaving a message at the booth can get tricky. Since the installation is basically a computer accessing the Hope Floats website and not an actual phone, you have to click the microphone symbol to start recording. At this point, most people, myself included, reached out to tap the screen. But you have to use the rolling ball next to the keyboard to move the cursor, press the "click" button below it, and click again to save your recording.

Sheinkopf is aware of the problems and says it's a work in progress. In fact, after watching folks repeatedly tap the screen on Sunday, Sheinkopf added a label to the machine, indicating where the mouse was. He also says his team would work on shortening the introduction as well as improve the color scheme of the topics list, which is currently difficult to read. 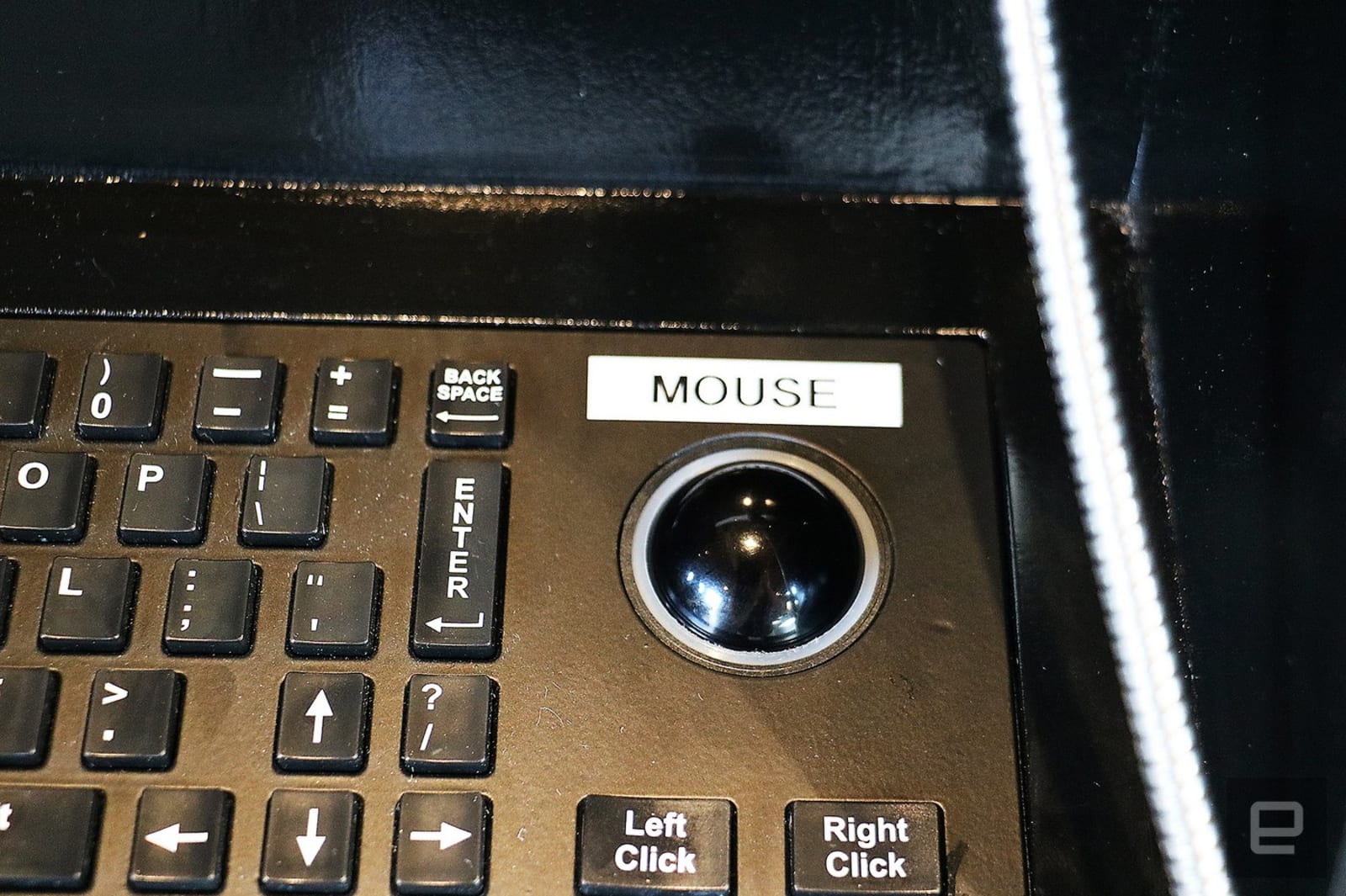 The second part of the Hope Floats experience is more rewarding. All the messages people have left, whether from the booth or website, are being stored on a server. In September, Sheinkopf and his team will launch a callbot that will repeatedly dial the intended recipient of each message and play the recording. Sheinkopf says this is meant to help "people who have full-time jobs who can't be on the phone all day long." Since a large volume of calls on an issue can bring lawmakers offices to a halt, this is a more effective means of reaching your elected official than simply emailing or tweeting at them.

The team is also working on a raft-mounted device that will be launched into the water on September 30th. It will head towards Washington, DC, as it continues to place automated calls to various congressional representatives. During its symbolic journey to the nation's capital and the heart of the government, the raft will use solar panels to stay powered, along with a mobile hotspot and radio to make calls. As you might expect, the raft will also have GPS to help keep it on course. But even if it meets an untimely demise, the spirit of Hope Floats will live on. The raft is only meant to place about 5 percent of calls made by participants; the main system, hosted on servers back home, will do the bulk of the work. 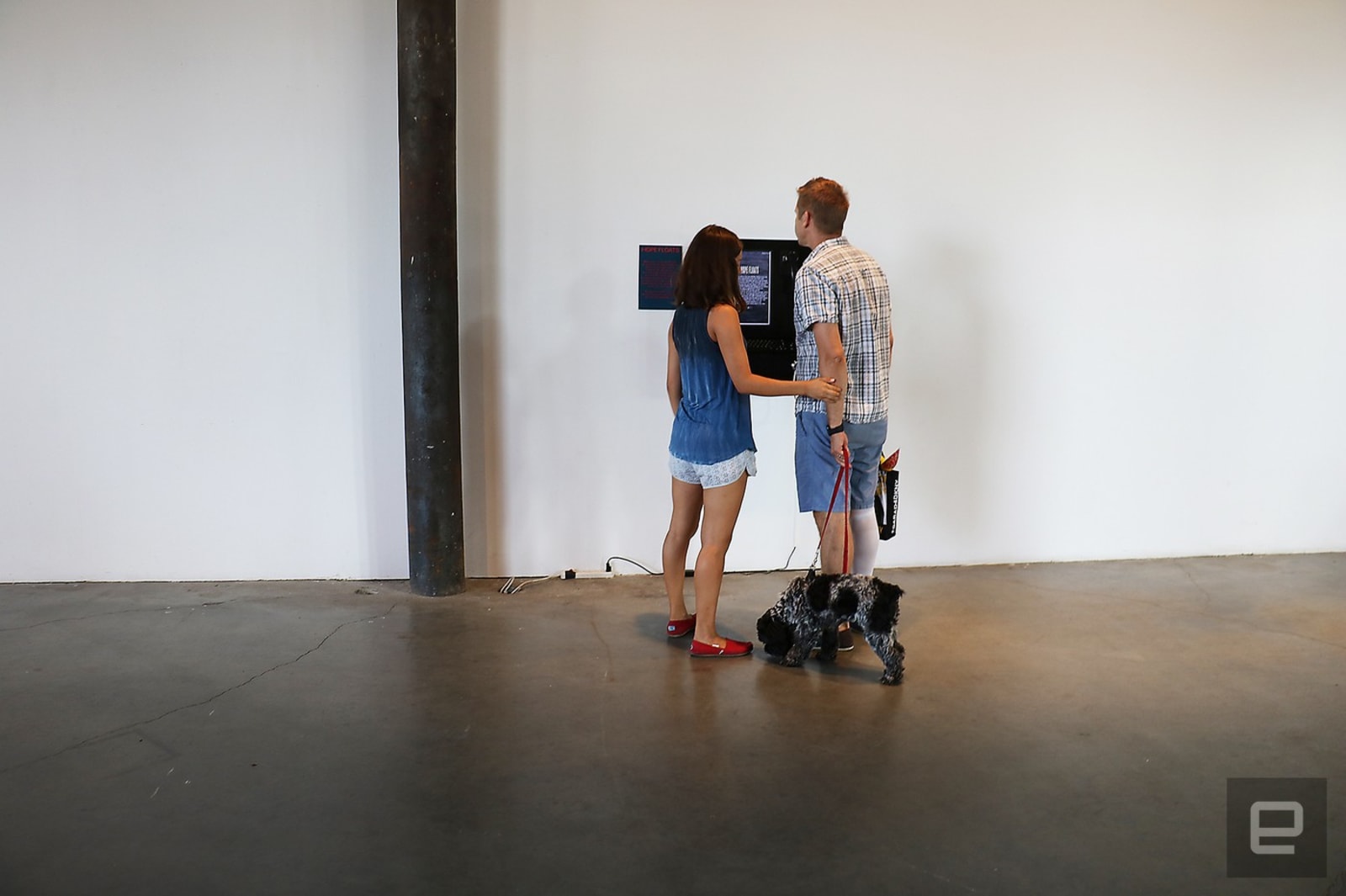 Hope Floats has many goals. It aims to show that participating in politics doesn't necessarily demand a lifestyle change. "We would hope that people feel like it's less of an obstacle to engage with their government and feel like they participated in something that up until now felt very distant from them," Tabor says. "It's also about demanding that your representatives do their job and represent you," she adds. But the team also wants to inspire others to explore creative ways they can use technology for political engagement.

But the project can't achieve much if it continues to operate at such a small scale. According to Pioneer Works, 30 messages were left on Sunday. At this rate, about a thousand calls will be saved by the time the raft launches at the end of next month. You can continue to send messages via the booth or the website even after the raft sets off. Hope Floats needs greater momentum to make politicians pay attention, but I suspect it will gather steam once the callbot starts dialing.