And at a reasonable price.

As the all-important holiday season approaches, companies want to make sure their products have a spot on your shopping list. So Samsung's trio of wearables launching at IFA 2017 is timely, especially given how well wearables tend to sell ahead of fitness-related New Year's resolutions. At a relatively affordable $200, the new Gear Fit 2 Pro is poised to be a popular gift. It adds a handful of updates to the existing Fit 2 activity band to make it a better tracker than before, especially for swimmers and runners. During a brief hands-on here at the show, I was impressed by how a few small enhancements helped the Fit 2 Pro feel like a huge improvement on its predecessor.

Perhaps the most important update is the Fit 2 Pro's water-resistance. Rated at 5 ATM, the Pro can survive being submerged in up to 50 meters of water, like the Gear Sport smartwatch, which Samsung also unveiled today. With that underwater capability, the Fit 2 Pro can track your swims with the company's own S Health app or a new Speedo app that's launched alongside the new Gear wearables. The difference between the two is that S Health can track your heart rate during your swim as well, something the Speedo version can't do. When it detects that you're underwater, the Fit 2 Pro will go into something called Water Lock Mode, which prevents water bubbles from activating or interacting with your screen. When I tried plunging my wrist into a tank of water while wearing the Fit 2 Pro, its screen simply went black until I pressed a button on the side. Then, the display turned on to show it had been running the swim tracking app that I had launched before dunking my hand.

The Fit 2 Pro now comes in small and large sizes, which will both sport a 1.5-inch curved Super AMOLED screen. That's a smaller display than last year's Fit 2, which measures 1.58 inches. Still, the Fit 2 Pro's bright, colorful screen felt adequately roomy during my preview and it was responsive as I swiped through widget after widget on the band's Tizen-based OS.

Samsung also unveiled a few new features for this year's Gears, which I've described in detail in my hands-on of the Sport here. But just to give you an overview -- the devices now continuously track your heart rate (they only checked it in intervals before) and automatically detect your workouts once you've been engaged for at least 10 minutes. Both the Gear Sport and Fit 2 Pro now also let you enter your calorie intake from your wrist, saving you from having to dig around for your phone after a meal. They'll also show you your net caloric intake for the day and advise you on how to reach your goals. In short: Move more, eat less. 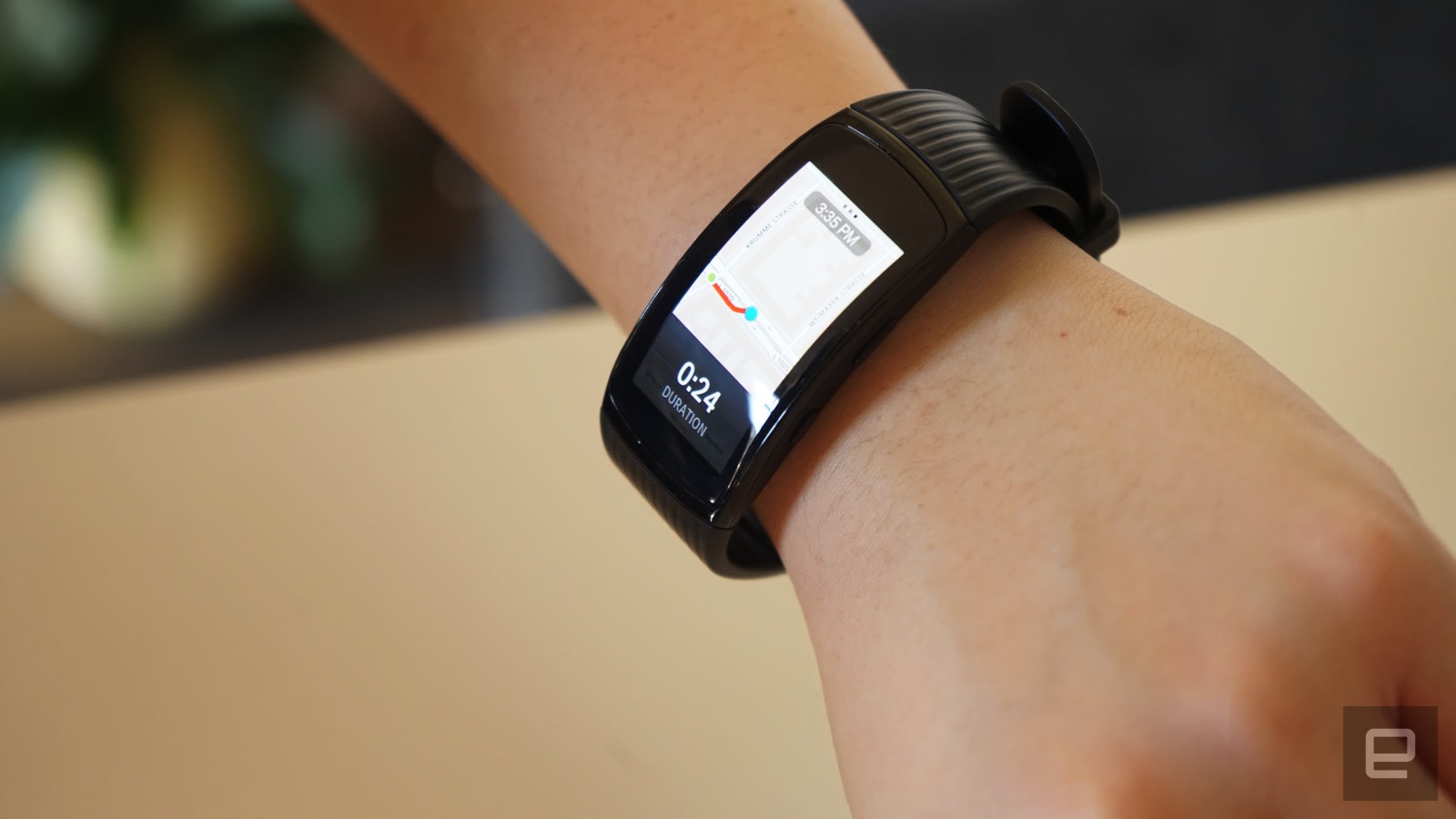 The two devices have 4GB of onboard storage, too, which will let them support a new Spotify offline playlists feature. I tried this out during my hands-on, and was impressed with how intuitive it was to save a playlist, since the process is largely similar to that on a smartphone. You can then stream the music to a pair of Bluetooth headphones.

The Fit 2 Pro now features a buckle clasp instead of the slightly unwieldy peg-and-hole closure from before. Thanks to this change, it was relatively easy to put it on during my demo. Like the Fit 2, the Pro has built-in GPS to make it possible to map your runs and bike rides without your phone, as well as get more-accurate calculations for your running pace. 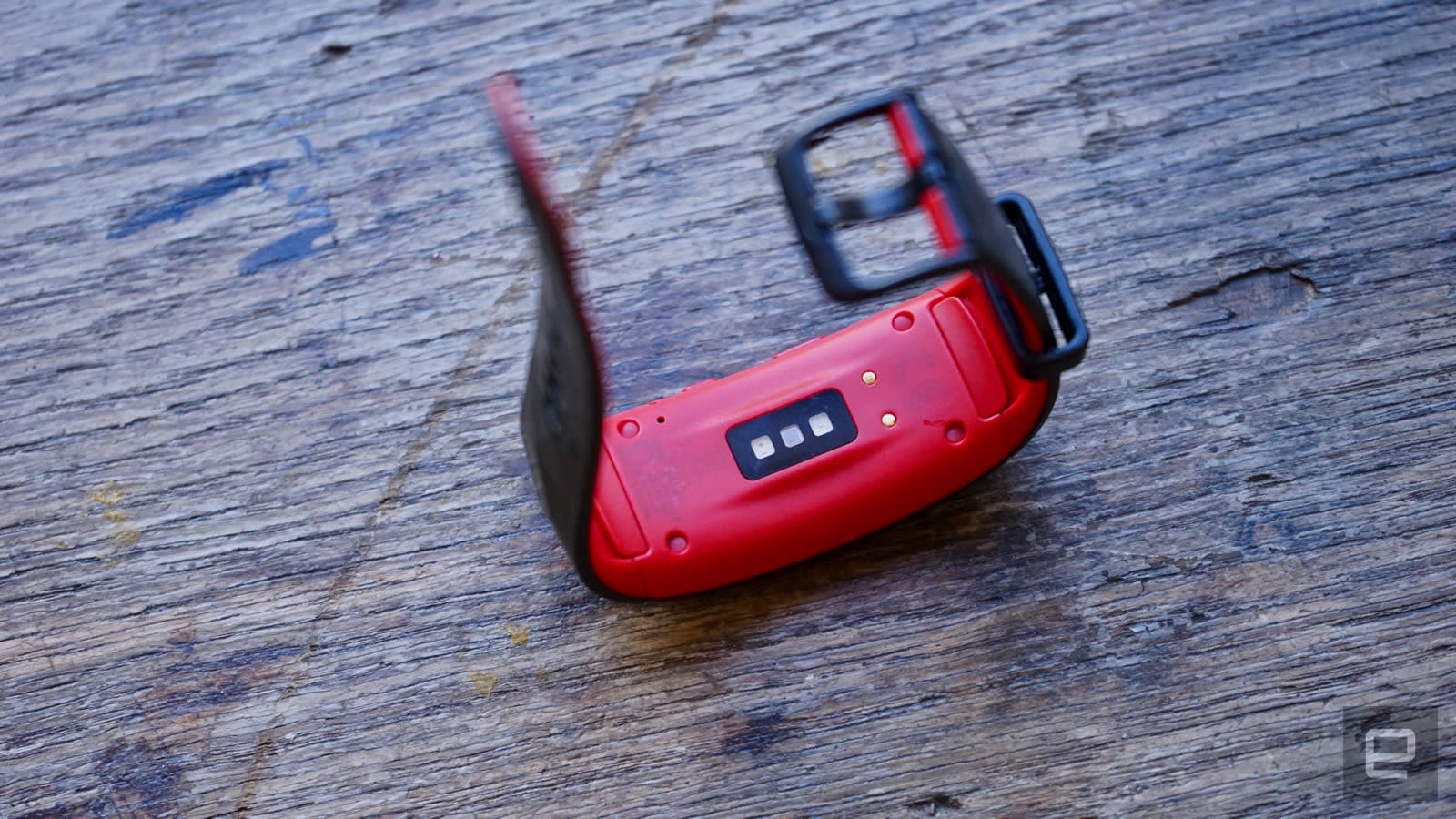 Many of the updates for the Fit 2 Pro are incremental or software-heavy, but when taken as a whole they make the device a much more useful band for a wider variety of situations. Having Spotify playlists offline makes the Fit 2 Pro a better running or long-distance workout companion, and the new water-resistance and swim-tracking apps add swimming to the list of activities you can monitor with the band. For $200, the Fit 2 Pro is a compelling activity tracker for those who want a full-featured fitness band with smartwatch-like characteristics as well as a brilliant display. It will be available for preorder on August 31st, so you won't have to wait long to get one. Those who want something that looks more like a traditional watch and more apps should hold out for the Gear Sport smartwatch.

All products recommended by Engadget are selected by our editorial team, independent of our parent company. Some of our stories include affiliate links. If you buy something through one of these links, we may earn an affiliate commission. All prices are correct at the time of publishing.
Samsung Gear Fit 2 Pro hands-on: Tiny changes, big improvements
FitnessTracker
gadgetry
gadgets
gear
ifa2017
samsung
samsunggearfit
samsunggearfit2pro
smartwatch
wearables