Samsung may have just unveiled the Galaxy Note 8, but it's not finished with new devices yet. Here at IFA 2017, the company unveiled a trio of wearables with a deeper focus on fitness: the Gear Sport smartwatch, Gear Fit 2 Pro fitness band and the Gear IconX 2018 wireless earbuds. The Gear Sport in particular stands out as a sleeker, more-health-centric version of the Gear S3. The Sport borrows its overall aesthetic from the S3 but has some key differences, including an assortment of new features that are reminiscent of Fitbit's recently launched smartwatch. Samsung hasn't shared how much the Sport will cost yet, but we know it will range between $200 and $350 when it arrives for this year's holiday season.

Let's begin with the similarities to Samsung's existing flagship wearable, which launched at IFA last year. With its rotating bezel, round face and shiny finish, the Sport could easily be mistaken for the S3 (or even the S2 that came before it). Upon closer inspection, though, you'll notice differences like the new device's smaller 42.9mm case and tinier 1.2-inch Super AMOLED display. The straps are also narrower, measuring 20mm wide now instead of 22mm before. Basically, this is a more petite wearable, which is good news for people like myself with slender wrists.

I like the Sport's dainty size, but I appreciate its versatile aesthetic even more. Despite its name, the Sport doesn't look like it was made to only be worn at the gym or on a run. It looks a lot like a typical watch that can complement most of my outfits, and you can switch out for the band for a variety of options, including a leather-hybrid strap that mixes rubber on the underside to wick away sweat with leather on top for a more premium appearance. That's similar to the hybrid band Huawei made for its own Watch 2, although Samsung's features a perforated pattern that I don't care for. 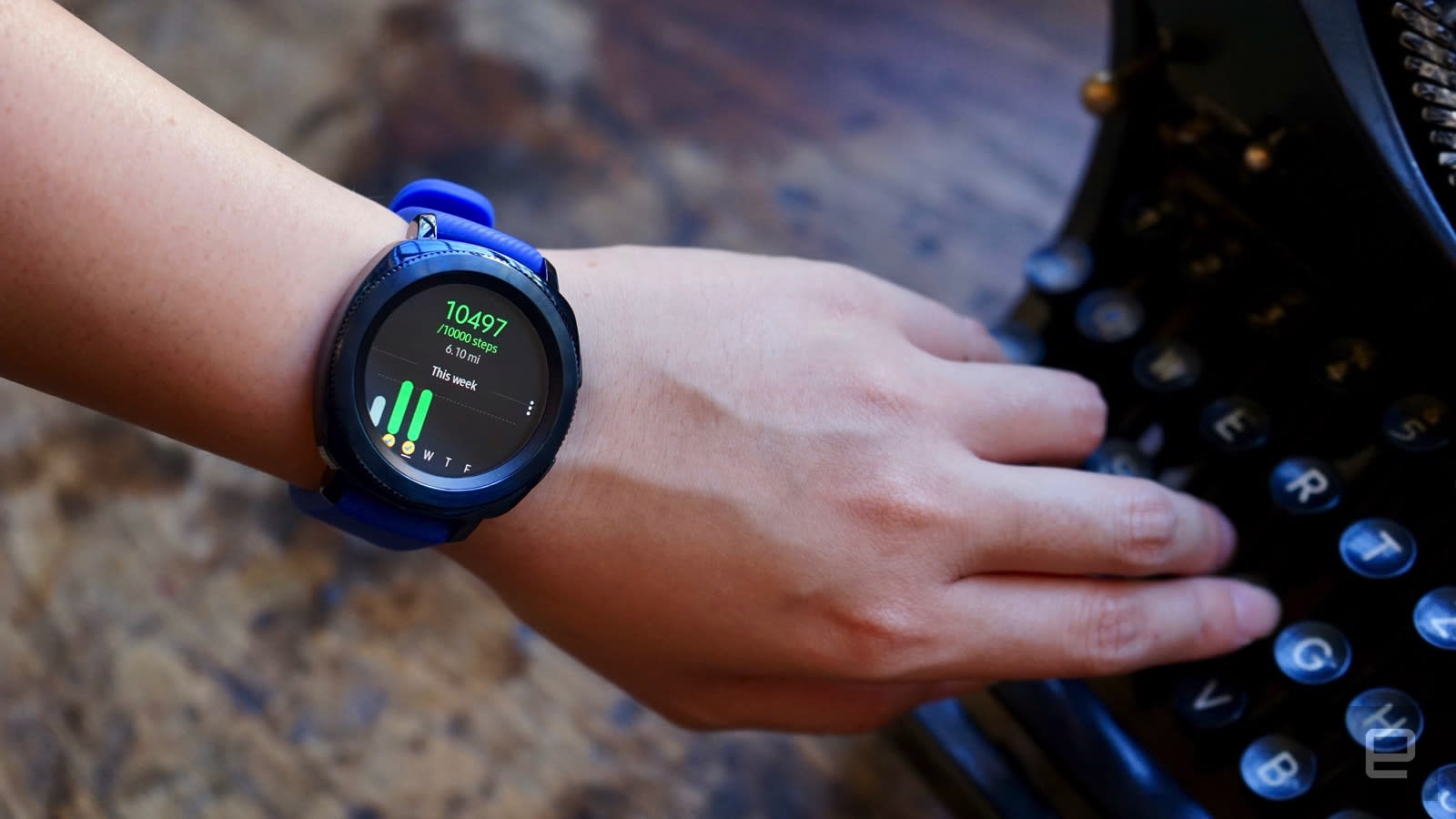 What I love, however, is the Sport's blue case, which somehow manages to be understated and uniquely attractive at the same time. Samsung also designed a colorful collection of watch faces to complement individual bands for a unified theme. Those watch faces were particularly eye-catching on the Sport's vibrant display, and although Samsung wasn't able to provide an exact measurement for brightness yet, the screen was definitely bright enough to see in harsh light.

Even though the Sport's face is smaller than the S3's, I had little trouble navigating the Tizen OS interface on it, thanks in large part to the nifty rotating bezel that's the hallmark of the Gear S line. I used the wheel to scroll quickly through widgets and apps to zoom in on the ones I wanted. There are a few new features for the Gear Sport, and I'm most excited about the ability to save Spotify playlists to the watch's onboard 4GB of storage. The interface I saw during my demo was similar to the smartphone version of the app, and it was intuitive and easy to use. After getting to the playlist you want, you'll just have to toggle the Download switch to store that selection of songs. 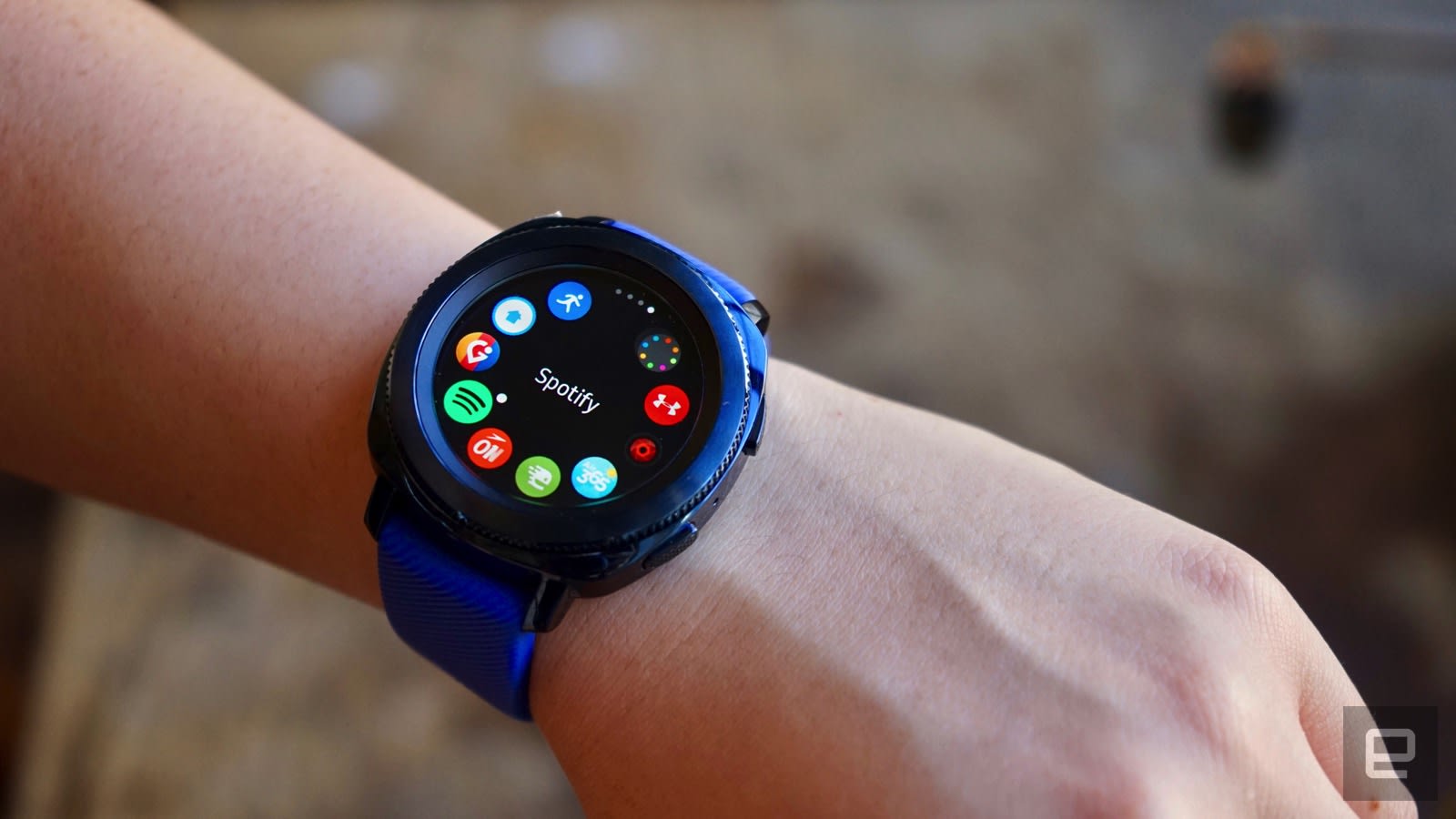 Another new feature is the Speedo app, which is the swimwear company's first wearable offering. It'll be preloaded on the Fit 2 Pro, but you can download it for free on the Sport as well. The app will track your laps, monitoring your time taken, calories burned and distance traveled. Don't worry, the Sport will survive your swim, since it's rated 5 ATM to withstand submersion up to 50 meters deep. It's also supposed to survive salt water, so you can keep your Sport on when you go for a dip in the sea.

If you don't want to use an app that reminds you of banana hammocks, you can go for Samsung's own S Health to track your swims. The native app can also track your heart rate under water, so you'll know what cardio zone you're in during your swim. The S Health and Speedo apps will communicate with each other, too, so you can switch between the two without losing your workout history. I didn't get to test the swim-tracking feature at my demo, unfortunately, but I am intrigued at the promise of cardio monitoring under water. 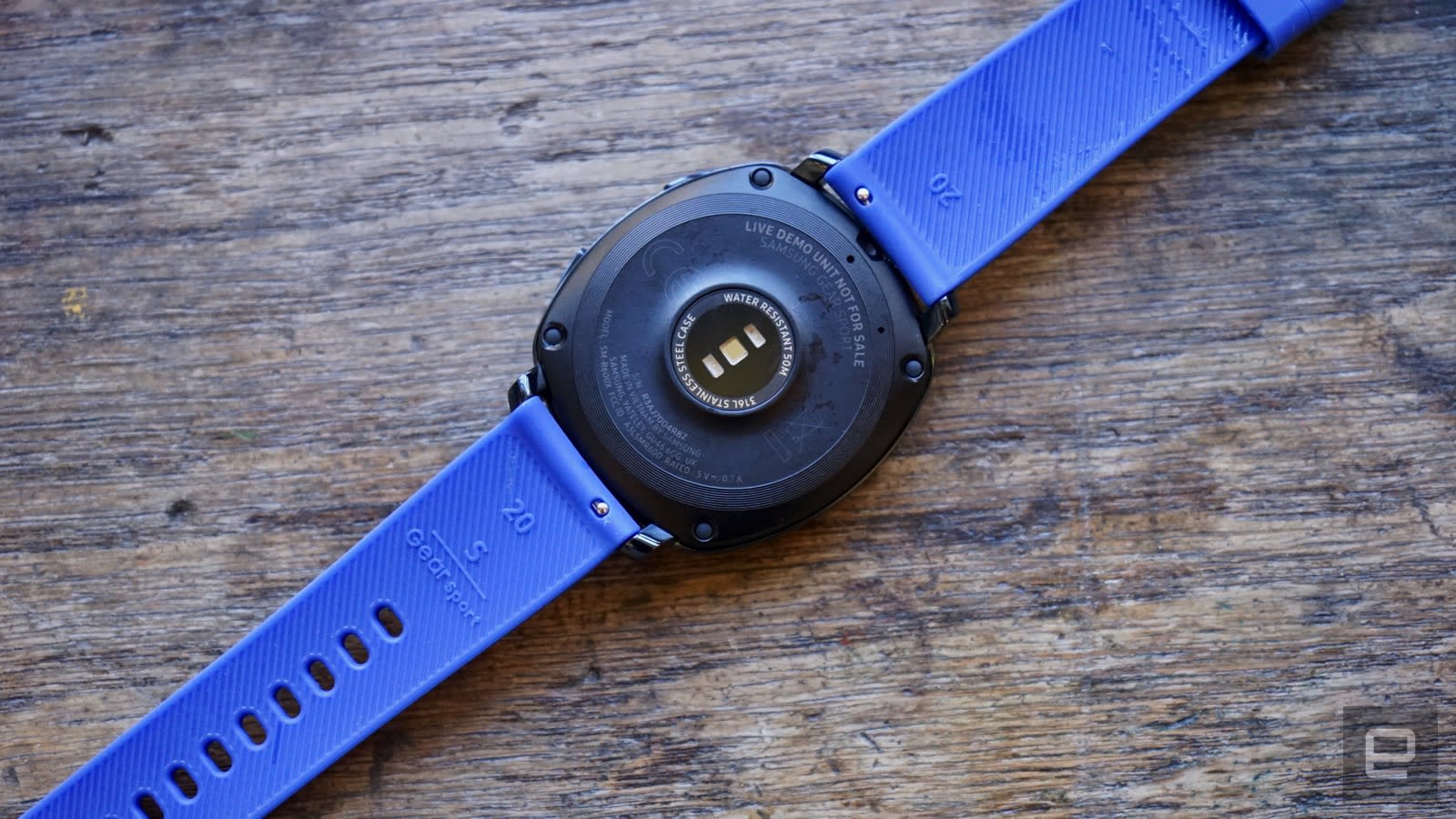 There are a few more apps for the Sport in addition to the thousands already available for the Gear S3, including MyFitnessPal, MapMyRun and Endomondo. You can use these usually paid-for apps for free for a year on the Sport (and the Fit 2 Pro). These let you track not only your exercises but also your sleep and nutrition. Speaking of, Samsung also added a new tool to the Sport that lets you enter the number of calories you've consumed directly into the watch, so you don't have to whip out your phone to keep track of your meals. The caveat here is that you'll have to guess how many calories your meal was instead of looking it up on the watch.

Since the device is also tracking the amount of calories you're burning throughout the day, it has a good idea of your net calorie loss (or gain) and will encourage you to meet your goals either by being more active or having lighter meals near the end of the day. Again, I didn't get to try this for myself, but the colorful interface I saw was easy to understand.

Like most of the latest fitness trackers and smartwatches, the Sport comes with GPS built in to map your runs for more-accurate distance and pace calculations. The new Gear wearables now also auto detect your activity once you've been working out for at least 10 minutes and will constantly monitor your heart rate. Other fitness trackers, like the Fitbit Charge 2 and Alta HR, have had these two features for some time now, so Samsung is playing a bit of catch-up here. 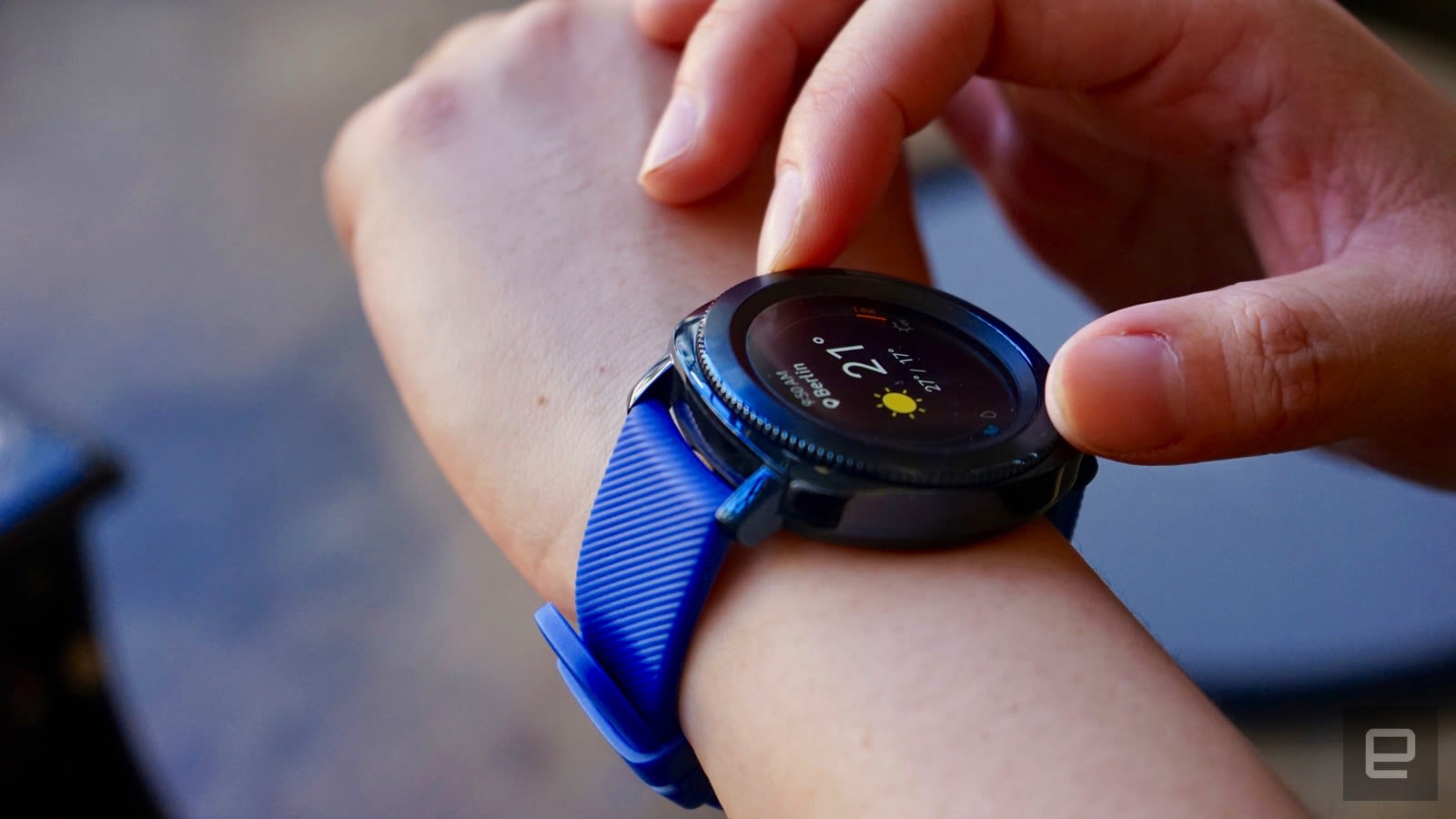 Samsung also introduced a new service called Fitness Programs (only for the Sport for now) with workout videos that you can follow along on your phone's screen. You can also cast the content to your Samsung TV and set scheduled alerts to remind you to work out if you want to meet your goals. With the Sport, you can also display your heart rate on the phone or TV screen so you can keep tabs on your cardio performance. Fitness Programs sounds just like Fitbit's newly rebranded Coach tool, which offers guided workouts but on the wrist instead of a separate screen. Fitbit charges a fee for the full version of Coach, whereas Samsung's offering is free, but I prefer having the workouts displayed on my wrist instead of having to bring a phone to the gym with me.

The Sport will also support Samsung Pay like the Gear S3 does, but instead of using MST (magnetic swipe transmission), which is accepted at many more merchants worldwide, the Sport will only have NFC. Samsung says it had to drop MST for the Sport to accommodate the device's smaller size.

You can also use the Sport to control PowerPoint presentations or navigate VR experiences. At our briefing, Samsung's David Ng surreptitiously (or not so) clicked through slides by turning his Sport's bezel and checked his presentation's timing, although we weren't able to try this for ourselves. Another feature that was teased but that we didn't get to see in action was the Sport's potential ability to act as a remote control for smart home devices via Samsung Connect. The company says you'll be able to use the watch like a "realtime dashboard on your wrist" for things like your TV and home appliances that are compatible with Smart Things.

Ultimately, the Gear Sport promises to be a feature-packed smartwatch that retains some of the best parts of the S3, although in a limited capacity, while adding some helpful new tools. The Gear S3 will remain available as Samsung's top-shelf wearable while the new Sport is a bridge device between the Fit 2 Pro band (which you can read about here) and the high-end smartwatch. So far, the Sport certainly looks like a formidable competitor to Fitbit's Ionic, but we'll have to wait till we can test the touted features for ourselves before we can decide. Until then, those looking for a fitness-centric smartwatch should hold off on making a decision.