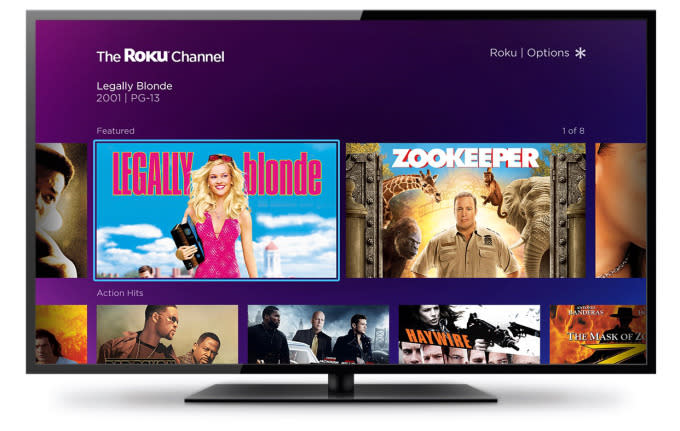 Roku announced today that is has launched its own movie channel. The Roku Channel will be available on all Roku players, sticks and TVs in the US and it will carry a selection of films that will update every month.

Some of the films available come from licensing deals with studios like Lionsgate, MGM and Sony Pictures Entertainment while others are sourced from other Roku channel publishers such as American Classics and Popcornflix. Some films you can expect to find at launch include Ali, The Karate Kid and Legally Blonde as well as hundreds of others from classics to blockbusters.

There are no added fees for the channel, which is supported by ads. But Roku says that there are half as many advertisements as there are on traditional television channels.

Roku, which just recently filed for its IPO through which it seeks to raise $100 million, has over 15 million active accounts and its devices account for 37 percent of all streaming media players used in the US.

The Roku Channel starts rolling out now and should reach all devices in the coming weeks.

In this article: av, entertainment, films, gear, Lionsgate, mgm, roku, SonyPicturesEntertainment, streaming
All products recommended by Engadget are selected by our editorial team, independent of our parent company. Some of our stories include affiliate links. If you buy something through one of these links, we may earn an affiliate commission.