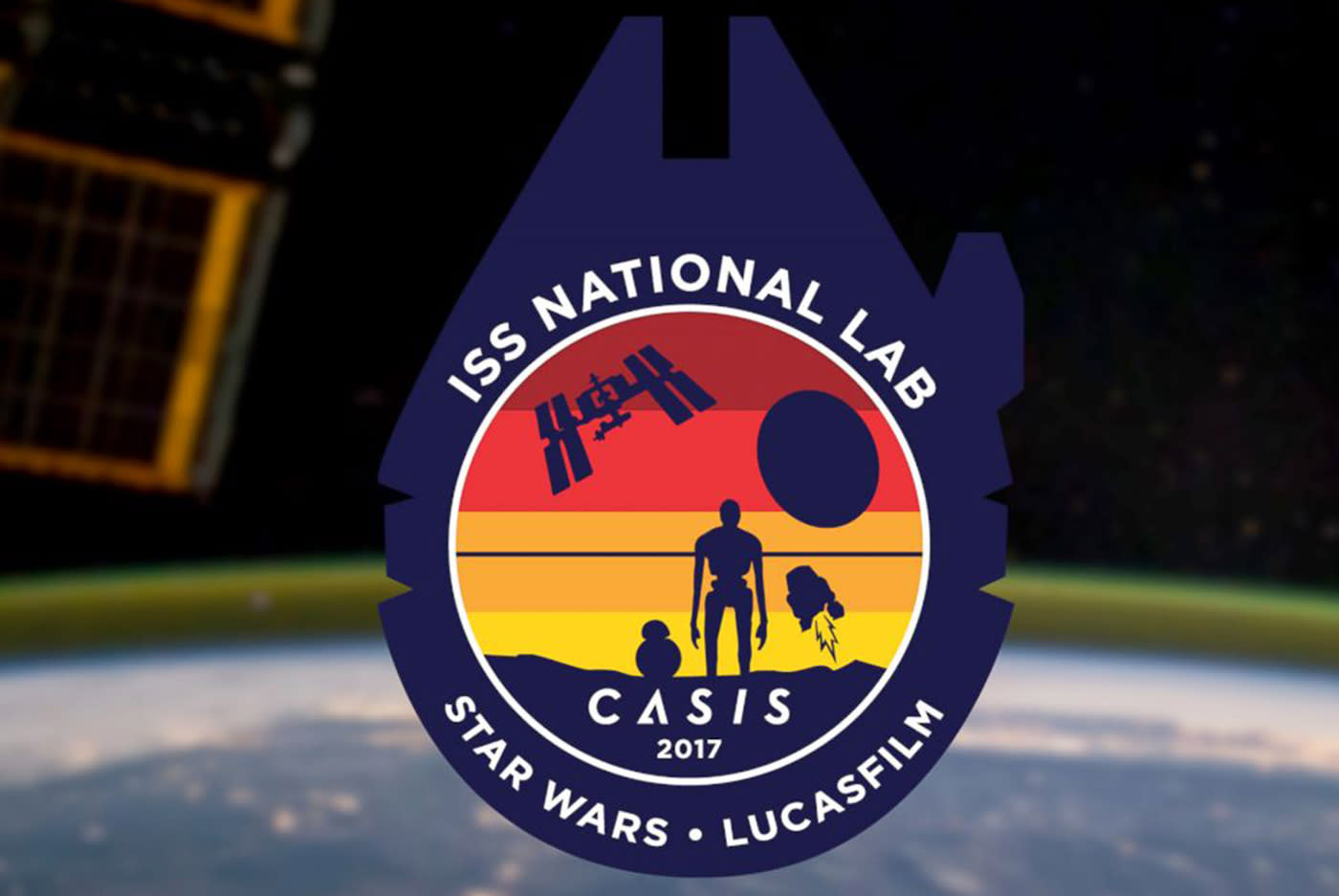 The International Space Station's mission patch for 2017 will look very familiar if you're a huge fan of that galaxy far, far away. CASIS or the Center for the Advancement of Science in Space, the organization that oversees all the experiments aboard the ISS, has teamed up with Lucasfilm to design the space station's Star Wars-themed annual mission patch for 2017. Since the patch is supposed to stand for all the scientific payloads already aboard and headed to the ISS within the year, Star Wars designer and concept artist Doug Chiang chose three of the franchise's newest droids to represent "the ideas of adventure, science and hope."

Chiang, who served as design director for Star Wars Episodes I and II and as concept artist for The Force Awakens, chose to draw the silhouettes of BB-8, K-2SO and Chopper inside an emblem the shape of the Millennial Falcon. They're standing against an illustration of the sunset meant to evoke memories of Luke Skywalker looking at the two suns of Tattooine, because Chiang thinks "that scene was about longing for adventure and hope." He explained to ABC News that "Star Wars, to [him], is the dream, and the ISS is the dream realized. [He] wanted the patch to evoke that spirit and inspire a new generation of scientists." You can also see a silhouette of the ISS from afar, next to the Death Star that's looming over the droids, because you can't have a grand adventure without a villain.

CASIS' marketing and communications manager Patrick O'Neill admits that "it's a bit of an odd couple mix," but adds that "the other side of the coin is, perhaps watching these types of movies provides inspiration for our thought leaders, our engineers, our scientists, allowing them to think about things in a new manner." Since O'Neill thinks that way -- and considering last year's mission patch features Groot and Rocket from Marvel's Guardians of the Galaxy -- we can probably expect more cool collabs with other sci-fi franchises in the future.

While you can't buy a patch with Chiang's design, CASIS will be giving them away through contests and events. The patch isn't the only thing Lucasfilm created to raise public awareness about the ISS, though. It has also teamed up with IBM to develop a 10-episode web series called Science and Star Wars. One episode about space ships will prominently feature the ISS as our only orbiting lab, as well as former astronaut Cady Coleman whom we interviewed about life on the space station a few years ago.

In this article: casis, gear, iss, lucasfilm, missionpatch, nasa, space, starwars
All products recommended by Engadget are selected by our editorial team, independent of our parent company. Some of our stories include affiliate links. If you buy something through one of these links, we may earn an affiliate commission.