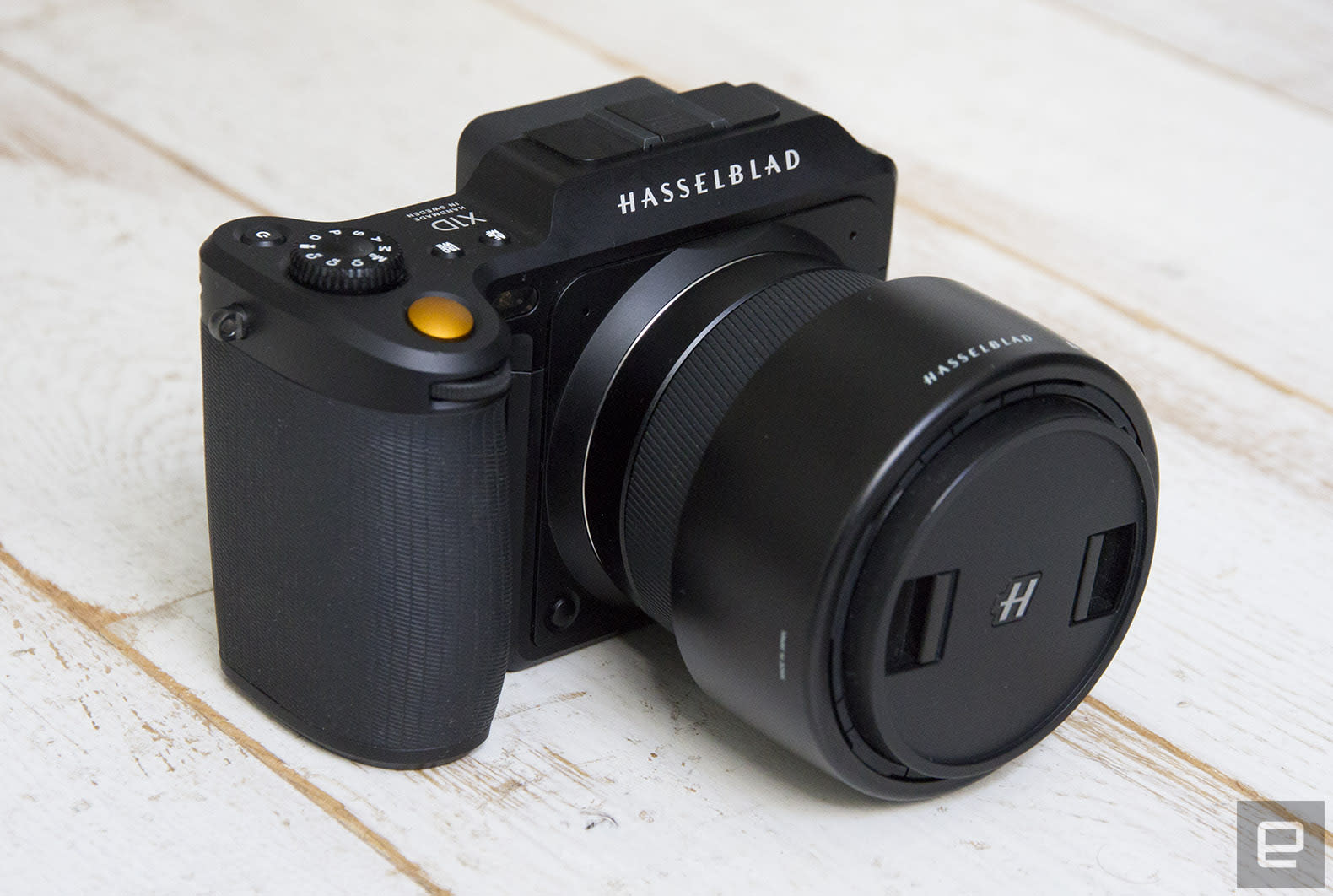 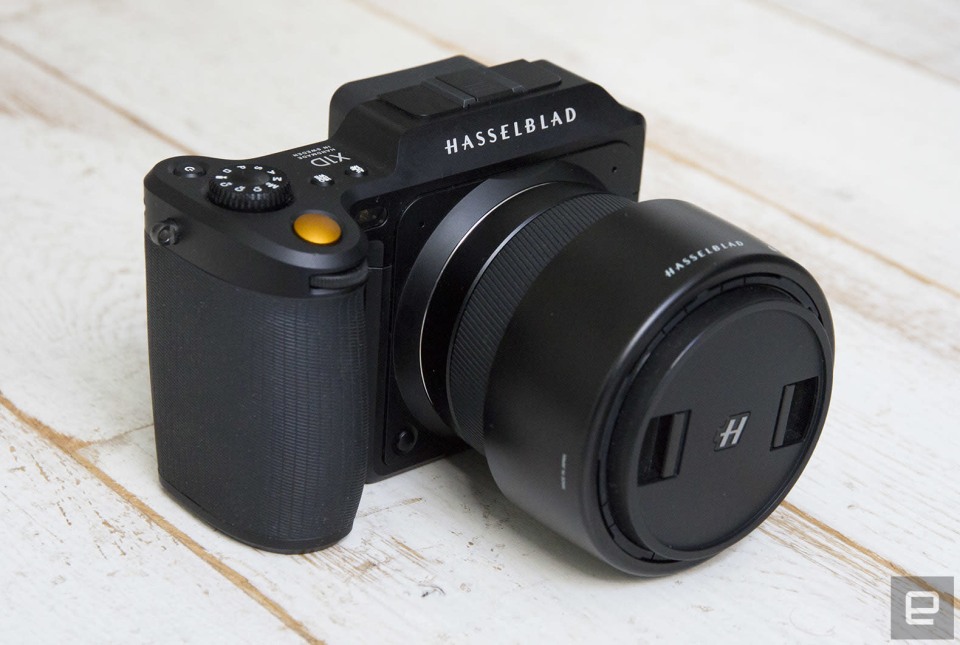 Paris is a magical place if you have the right partner, and who better than Hasselblad's X1D? The first-ever medium-format mirrorless camera (available in silver or black) is slim, stunning and easy to bring anywhere. Yes, it's costly as hell, but for the right kind of buyer, $9,000 (plus thousands more for lenses) is actually a bargain. I took it for a spin to see how it handled on the streets, and it was both a breeze to use and produced phenomenal images in all kinds of conditions.

The X1D came along just before rival Fujifilm's $6,495 GFX-50S, and to me, the sleeker Hasselblad has more allure. The tight all-aluminum body is built in Sweden, and has unique details like a battery cavity with no cover. Instead, the battery forms its own "door," via a built-in weatherproofing gasket. Another quality touch: The dual-SD card (UHS-I) ports and HDMI/USB 3.0/Headphone/Mic inputs have solid, precise aluminum doors, unlike the flimsy ones found on many DSLRs.

While the X1D is about the same weight as a full-frame DSLR, it's a relative featherweight in its category. Another Hasselblad model, the H6D-50C reflex camera, has the same sensor as the X1D, but weighs 2.1 kilograms (4.7 pounds!) compared to the X1D's 725 grams (1.6 pounds). That means you can easily carry it on location and still get the benefits of a huge sensor. The 50-megapixel X1D has about the same resolution as Canon's 5Ds, but can theoretically gather more light thanks to the medium-format sensor. That also gives it a shallower depth of field, but unfortunately, that's limited by the current lens selection (more on that shortly).

The X1D uses a leaf shutter with 1/2000th of a second max speed, which sounds slow, but is faster than other medium-format cameras. You can sync a flash to any shutter speed, rather than being limited like most DSLRs -- a key feature for portrait shooters. A recent firmware update introduced an electronic shutter, which reduces vibration and allows up to 1/10,000th of a second speeds.

There's a pair of physical dials to adjust shutter speed and aperture, a mode selector dial, an ISO/white balance button, and a manual/autofocus button. The rear 3.0-inch TFT touchscreen, while a bit laggy, has nice image quality. It lets you set the camera's controls via an intuitive menu system that puts more established mirrorless camera makers (ahem, Sony) to shame. The electronic 2.36-megapixel viewfinder (EVF) is bright and clear.

Hasselblad only gave me one lens with the X1D, the f/3.5 45mm prime, equivalent to about 35mm and f/2.9 (for depth of field) on a full-frame camera. The lens produces some vignetting (correctable by Hasselblad's Phocus software) but is otherwise sharp.

The lens was a bit slow and had less depth of field than I want for low-light urban shooting. Hasselblad has three other lenses for the X1D -- the XCD 30mm f/3.5, 90mm f/3.2 and 120mm f/3.5, but nothing faster yet. It also has three more coming, including a zoom and macro, but has yet to release the full specs. For now, the extreme depth-of-field and low-light potential of its medium-format sensor is hampered by the available lenses.

Taking $11,290 worth of camera equipment (including the lens) into Paris was nerve-racking, but I got used to it quickly. It's simply a wonderful camera to carry around -- it weighs a less than my Canon 7D and the rubberized grip is fantastic.

The startup time is around 11 seconds, which is, frankly, terrible. If you want to be spontaneous, you can reduce that by putting it into sleep mode, but that drains the battery quicker. And battery life is not great to begin with -- after four or so hours of intense shooting, it died on me. The camera also gets quite hot after extensive use.

I usually stress about learning settings on new cameras, but I was quickly shooting on the X1D with no issues. The main controls (aperture, shutter speed, ISO and white balance) are handled by the dials and buttons, and everything else can be accessed quickly on the responsive touchscreen.

You can shoot at 3 fps, reasonable for a camera that produces 105MB images, but far from Canon, Nikon and Sony full-frame models (it's comparable to Fujifilm's GFX 50S, but the latter camera starts much quicker). The LCD/EVF blacks out for about a second while shooting, and the leaf shutter makes two dramatic clicking sounds, once to take the image, and again to reset. That means it might not be appropriate at sensitive events unless you use the quieter electronic shutter. RAW images average 105MB each, and JPEG's are limited to previews. You'll need to have a decent computer and fast SD cards, but the payoff is 16-bit RAW "3FR" files with more tonal values than most DSLRs. Hasselblad claims a stellar 14-stops of dynamic range.

One thing I didn't expect was running out of space on the (skimpy) 16GB card that Hasselblad supplied with the demo unit -- it can only hold about 150 of those crazy large images. I found myself deleting photos while shooting like it was 2007, but it did force me to be more choosy about shots.

Low-light capability is excellent, despite what seems like a fairly limited maximum ISO (100-25,600). Hasselblad must have been conservative with those figures, because the top one or two settings are still usable, in my opinion. At anything up to about 3200 ISO, noise was not an issue.

The contrast-detection autofocus is reasonably fast and accurate, though nothing like systems from Sony or Canon. It can fail in low-light situations and is not great at tracking fast-moving subjects, so this is not a sports camera. On the plus side, you can select numerous points using the touchscreen, making it easy to control focus. The auto white balance worked well, whether indoors or out.

I deliberately shot from dusk until dark, both to test the X1D's low-light capability and because that's the best time to shoot, in my opinion. I was soon confidently snapping scenes with both bright lights and dark shadows, knowing that the RAW images had the latitude to deal with it. I was particularly impressed how it handled a shot of Paris' brightly-lit Pantheon, with tourists in the much darker foreground.

I did take some video, and unfortunately, the X1D can only shoot at 1080p/25fps. However, at least it has microphone and headphone inputs, unlike most mirrorless cameras (Sony's A7 models being a notable exception). You can't compare the video quality to, say, a 4K GH5 or Sony A7S II, but the larger sensor does give the footage an interesting look. For instance, at f/3.5, people in the foreground were pin sharp while the background was lightly blurred, creating a mild tilt-shift look.

In the end, I found that the X1D has fewer tradeoffs than possibly any other medium-format camera. Still, why get it instead of more capable full-frame models like the Sony A7R II or Canon 5Ds? The payoff is in the images. With shots I originally thought were too dark, I was able to fully recover shadow details. Over-exposed shots can also be pulled back with details that you thought were blown out (see the images at the end of the gallery, above).

The relatively high resolution makes it possible to crop images down to a quarter of what I shot and still blow them up to poster sizes. Colors and skin tones render accurately right out of the camera and require little, if any, tweaking. The transitions between tones and colors are gentle and natural. In short, the images are stellar right out of the camera, and skilled art, fashion and landscape shooters can get even more out of them in post-production.

Neither you nor I will likely buy this camera, so why look at it? It's simply an interesting, groundbreaking product with features that may wind up in more affordable consumer cameras. Thanks to smartphones, photography is evolving at the fastest rate in its 180-year history, and bleeding-edge models like the X1D can give us clues as to what's next.

In this article: 50-megapixels, cameras, gear, Hasselblad, MediumFormat, Mirrorless, X-1D
All products recommended by Engadget are selected by our editorial team, independent of our parent company. Some of our stories include affiliate links. If you buy something through one of these links, we may earn an affiliate commission.