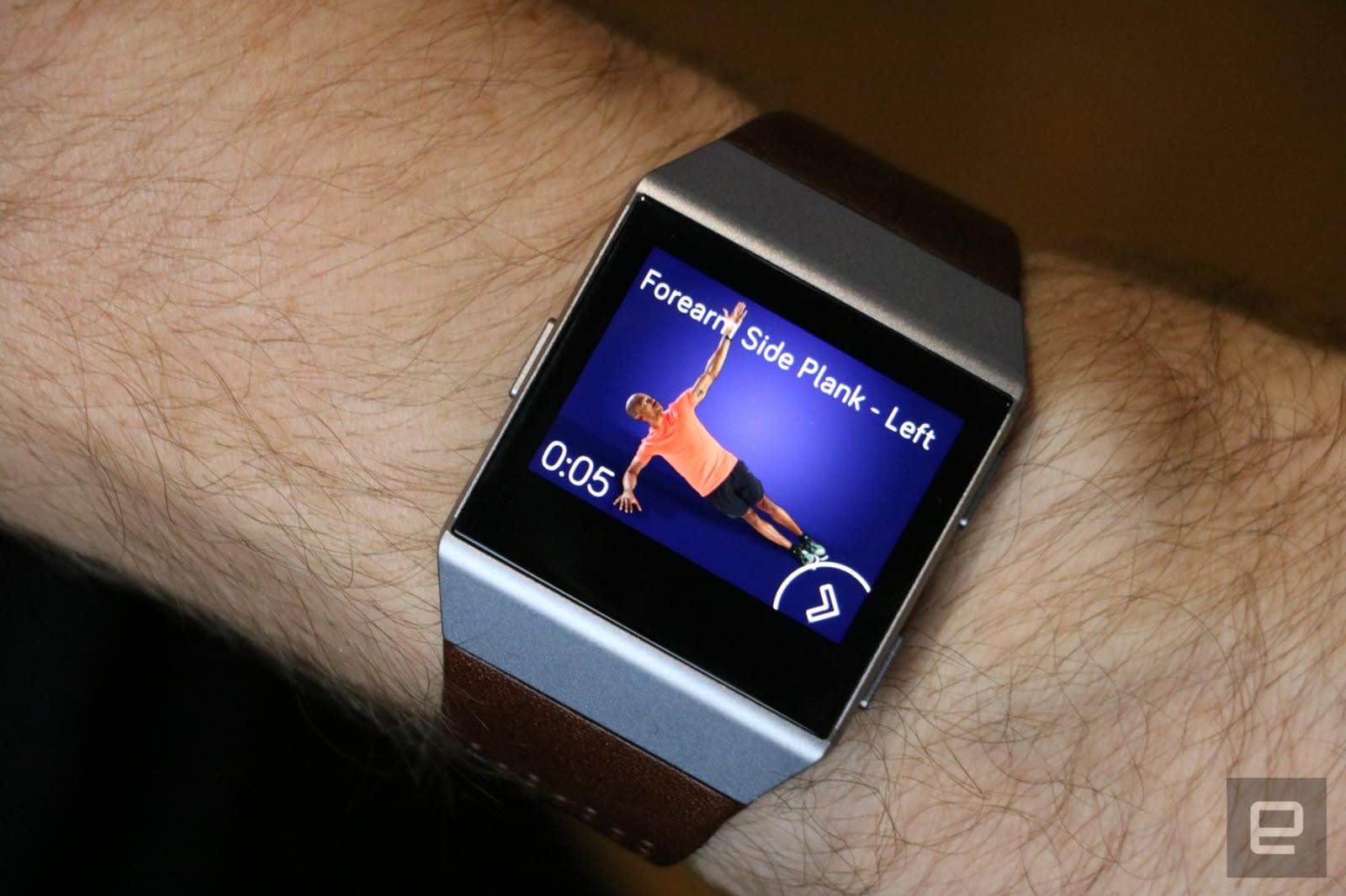 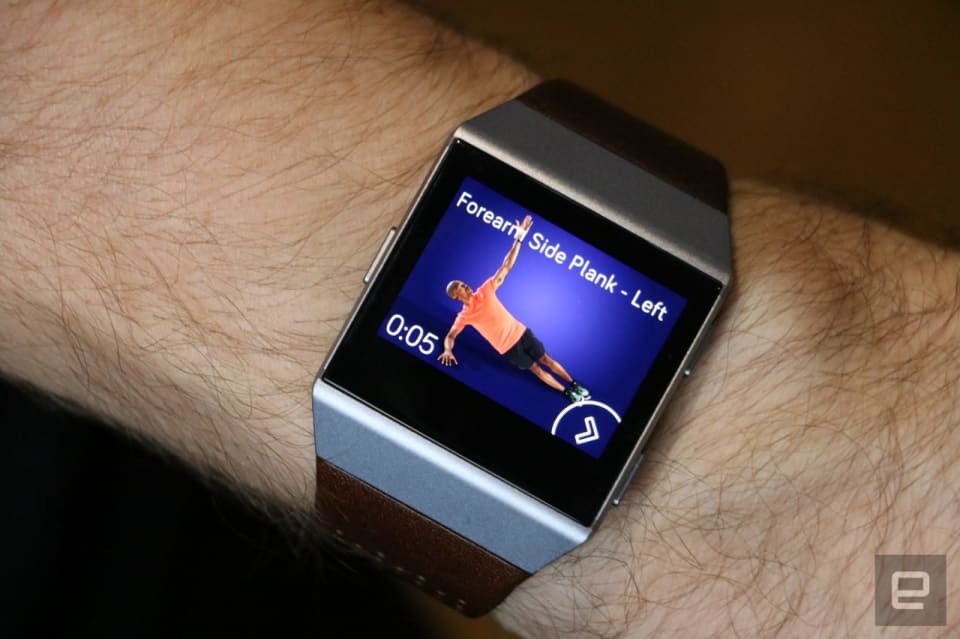 The holiday season is almost upon us, but as you fantasize about the mouthwatering delicacies you're going to put in your bellies, some of you may already be getting ready to shed a few pounds. A new and improved crop of fitness-centric smartwatches will be arriving soon to make staying in shape easier, and the Fitbit Ionic may be one to consider. It's the company's first full-fledged smartwatch, and the device packs a slew of new features designed to help people follow through on their workout plans. Well, that's the promise, anyway. As the Ionic's October arrival approaches, the company has pushed out software updates to early reviewers, but the device still feels unfinished.

I've had the Ionic for a few weeks now, but for most of that time I was making do with early software. You can read my preliminary impressions here. Last week, the company issued an update, but it hasn't appeared to do very much other than add a music app for transferring and managing onboard songs and rearranging the order of apps in the gallery. The rest of the company's debut smartwatch platform, Fitbit OS, needs some serious fine-tuning.

First of all, there still aren't many apps available for download, and all 13 of them are installed on your watch by default. To remove them, you'll have to go to the Fitbit app on your phone, navigate to the Apps section and uncheck each one. Rearranging them is easier -- you can do so from your wrist by holding down on the app you want to move and then dragging it elsewhere.

These apps mostly work as promised. The Today app tells me my daily progress toward my step and calorie goals, while Alarm and Timer are serviceable. After setting a default location via my phone, the Weather app now shows the daily temperature range and sunset times.

One of the best apps is Coach. It offers the same three short workout guides it did before (albeit with different graphics): 10-minute abs, a 7-minute workout and "Treasure Chest" (set of chest-centric exercises). To get more options, you'll have to sign up for the premium Coach service, which costs $8 a month. That's the same price as a Netflix or Hulu subscription, both of which offer workout videos in addition to award-winning TV shows and movies. 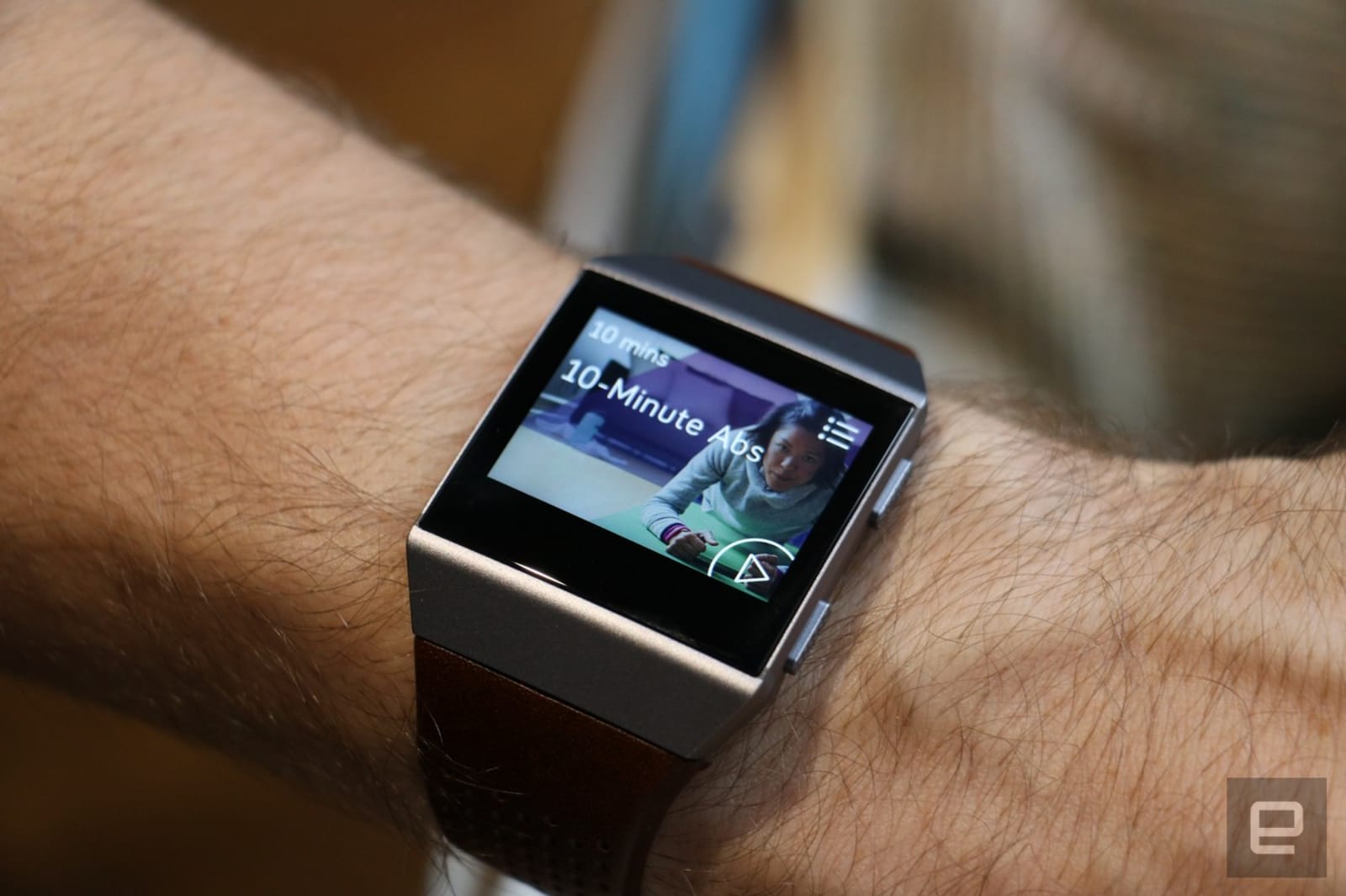 I kicked off my morning with a 10-minute ab session, which was thankfully easy to follow and well-paced. A lot of the suggested exercises were familiar: a 30-second set of bicycle kicks followed by 45 seconds holding a plank stance. Whenever each set was up, the watch would vibrate so I knew to stop. There aren't audio cues for now, those will come with the premium version later. I also enjoyed learning new moves (to me, anyway) like something called "Windshield Wipers," which involved sticking my legs straight up while lying down, and then swinging them from side to side. The in-app animations made it easy to follow along.

As someone who strings together random Instagram-inspired exercises at the gym, I appreciate having something else tell me what to do. I only wish there were a way to customize the intensity of each workout, but that appears to be a feature available to paid Coach users. In fact, the Guided Health Program service learns your fitness habits over time and tailors workouts to you. It will even recommend that you go to bed at certain times to optimize recovery, or suggest a so-called Relax session to bring down your heart rate. As useful as the three free guides are, I wish Ionic owners could get more options built in instead of having to pay an extra fee each month. The premium service launches this winter, and Fitbit says it will continue to add programs like audio coaching through 2018. 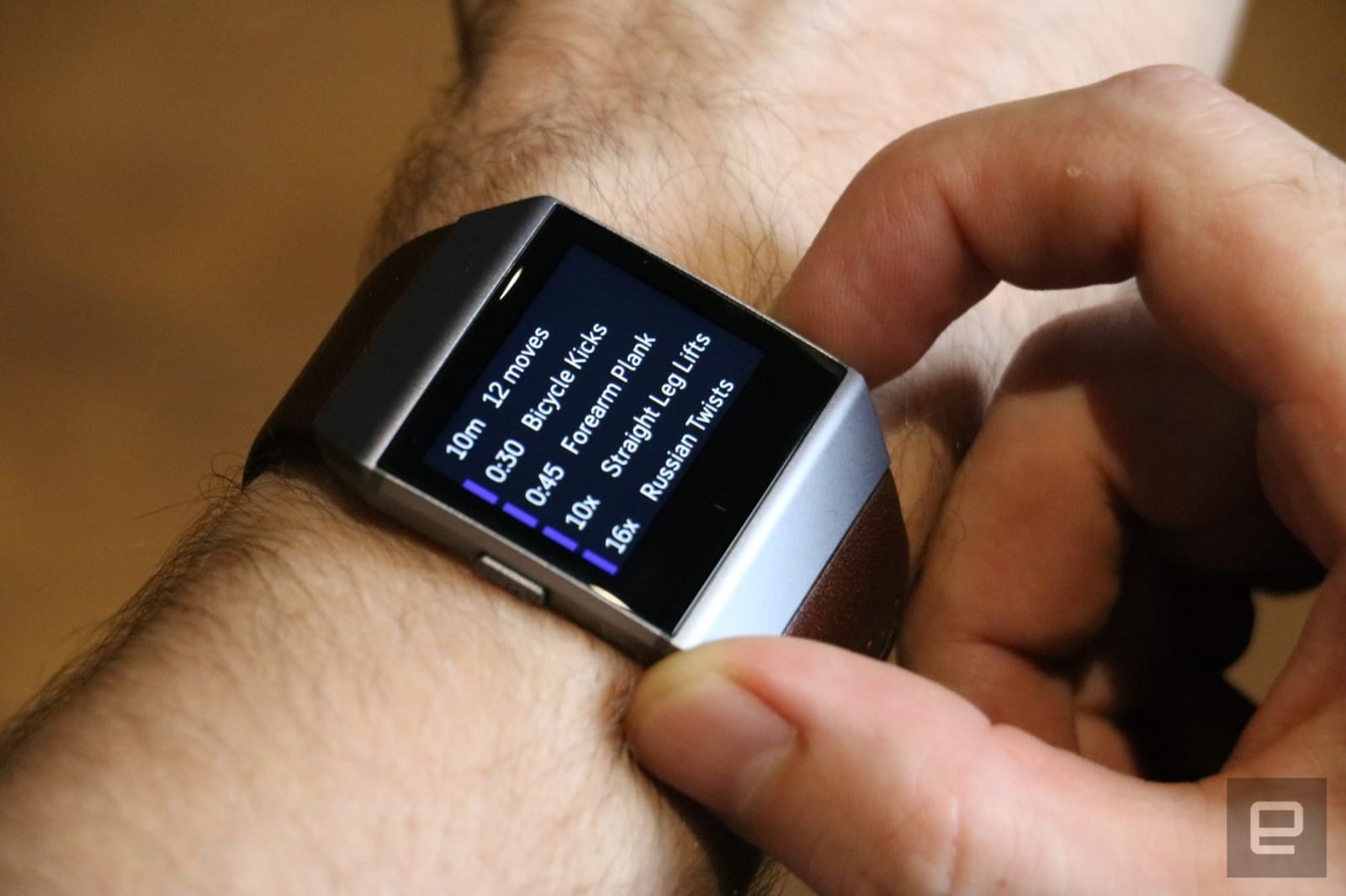 Still, despite its limits, Coach is a useful tool that sets the Ionic apart. Unfortunately, a lot of the other features Fitbit promised are either buggy or not yet ready. I spent a frustrating hour trying to transfer music to the watch's local storage to no avail. There are two ways to play music from the watch: via the Pandora app (which requires a Pandora Premium account) or Fitbit's Music app.

After I signed up for a Pandora Premium trial, I selected the Dance Workout station in the Fitbit app's settings on my phone, which is then supposed to send that playlist to the Ionic. But when I looked at the Pandora app on my wrist, nothing happened. The next morning, the playlist finally showed up on the watch. Fitbit said the delay might have been caused by the watch having too little battery at the time I initiated the transfer or possible WiFi issues.

After my initial failed attempt with Pandora, I tried to load my own music onto the watch, which requires you to use the Fitbit app on your PC. Not only that, it also asks that your music be in either Windows Media or iTunes playlist formats. So I went through the rigmarole of putting my individual tracks in a Windows Media playlist and then setting the source folder for my music, only to be told at the final step that my music files weren't found. My songs were in .WAV and .MP3, two of the most common music formats, so I was puzzled.

After a 48-minute-long call with several Fitbit reps, we finally figured out that the files I had been trying to sync may have had conversion issues -- a different MP3 file eventually made the journey from my PC to my watch successfully.

Fitbit also said it understands that not everyone organizes music on their PCs in playlists, and is working on allowing Windows users to manage and organize tracks directly within its desktop app. When this rolls out in October, you'll be able to add individual songs to the Fitbit app on Windows without having to first set up a playlist. 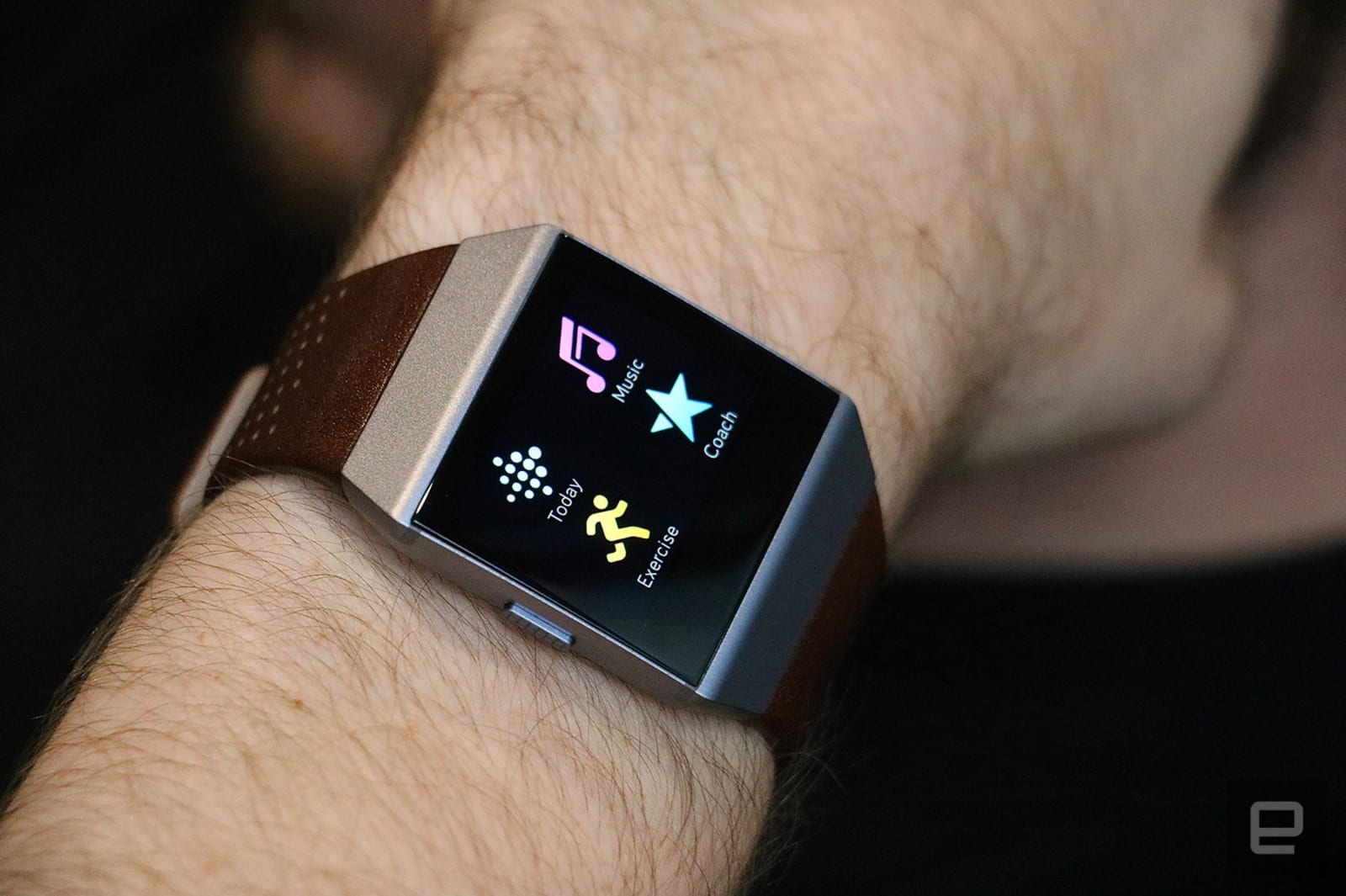 Another feature that's not live yet is Fitbit Pay. For now, this is limited to specific MasterCard gift cards that Fitbit had issued for testing and worked when I tried it out at the company's launch event last month. When the Ionic arrives in stores in October, though, Fitbit Pay should be up and running with other (real) MasterCards, as well as eligible Visa and American Express cards. But since I wasn't able to test this out myself, I'm not sure how well it will work outside of a controlled test scenario.

Those are my major complaints about the Ionic so far; hopefully they'll be addressed by the time the watch comes out next month. Meanwhile, the rest of the Ionic works as smoothly as it did when I first checked it out -- you can read previews of notifications from your phone (but you can't reply), install pretty watch faces and control music playback. Fitbit said this software is close to final, in that it will mostly look the same, but that there could be further updates before launch to address bugs.

In this article: fitbit, fitbitionic, FitnessTracker, gadgetry, gadgets, gear, smartwatch, Smartwatches, wearables
All products recommended by Engadget are selected by our editorial team, independent of our parent company. Some of our stories include affiliate links. If you buy something through one of these links, we may earn an affiliate commission.