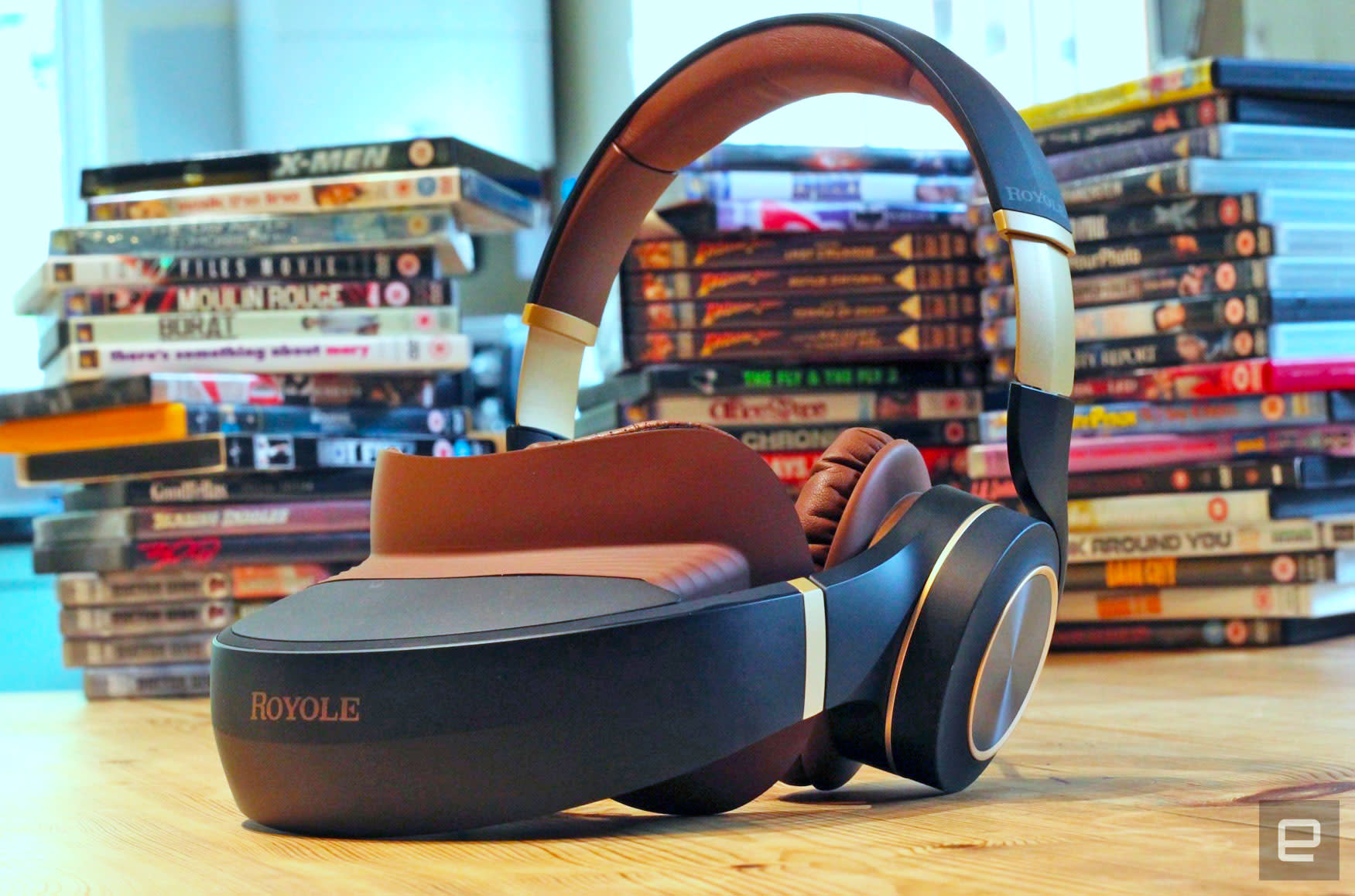 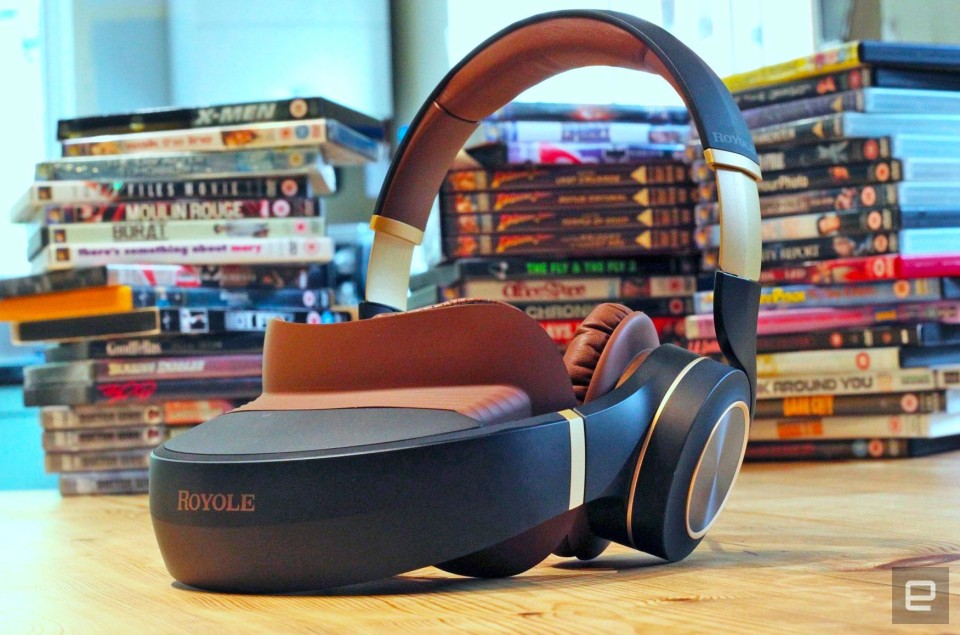 VR's not-so-meteoric rise has also revived interest in that most sci-fi of concepts: the personal cinema. A head-mounted display that lets you immerse yourself in a movie, blocking out the distractions of modern life. No matter if you're on a plane or train, you can pretend that you have your very own screening room, like presidents, billionaires and Hugh Hefner. The latest entrant into that world is Royole, a company that doesn't have a storied history in consumer devices, instead producing flexible, super-thin AMOLED displays for businesses. It hopes to use its know-how to out-do rival headsets, like Avegant and Sony, which have both offered similar hardware in the past. But how does Royole's Moon compare to those other devices, and is it really the future of cinema? 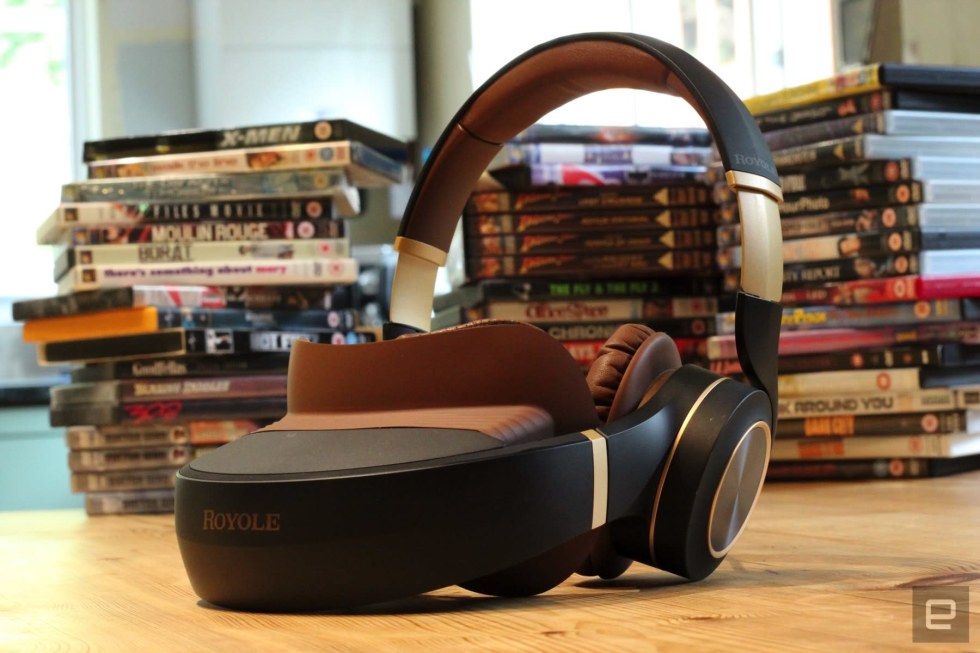 The short answer is no, but that's not to say that Royole's headset is a total dud.

For instance, the hardware has been designed to scream premium product from every pore. The black edition has gold accents on the headphone arms and earcups, with everything else clad in a supple brown leather. Don't be surprised if this device pops up on the front cover of every high-end department store catalog this holiday season.

Build quality, too, is of a level that you'd expect for a product setting you back $800: The arms and visor are all pretty sturdy. Fundamentally, you could -- and should -- expect this device to give you years of service without fuss. But, and it's a big but, the Moon is sturdy, not rugged, and that's a problem that blunts much of its utility.

I've been burned one too many times when it comes to taking expensive Bluetooth headphones with me on long trips. Despite keeping them in their approved velvet bag and placing them gently at the top of my backpack, they always, inevitably, break. It makes me reluctant to take an $800 personal cinema with me on a trip knowing that they could, very quickly, turn into a pricey ornament.

But that doesn't mean that the Moon wouldn't be a fantastic personal cinema for those who spend most of their days indoors. Much like Avegant's headset, the Moon has built-in corrective lenses that can ensure you don't need to awkwardly tuck your glasses inside it. The lenses can both be shifted to meet your eye line and twisted to suit your needs, so long as you're between -7.0 diopter nearsightedness and +2.0 farsightedness.

The audio, meanwhile, is exclusively delivered through the Moon's built-in headphones that come packing active noise cancellation. An obvious downside is that they're on-ears, which means that you have to deal with the associated discomfort -- if you feel such a thing. Your mileage may vary, but having your ears pinned back for hours at a time isn't a great way to spend an evening at the cinema. On the upside, the sound quality is amazing, with crystal-clear audio that has ruined at least one film for me. I watched L.A. Confidential in the headset, and only then did I hear that several lines, early on, were re-recorded later on. It's only because you can hear the room tone fade and the dialog pop up unnaturally that you can notice it. But I've never noticed it when watching with regular headphones or on my TV's sound bar.

As for picture quality, the two 1080p AMOLED displays are bright and crisp, and when you find a comfortable position to seat the device, you feel as if you are staring at an 800-inch screen. Kinda. It's hard to shake the notion that you're not really getting the detail and scale afforded by such a cinema size. At least not when you've got a device strapped to your face that's essentially a smartphone but much, much closer. It's worth mentioning, too, that the device can play 3D movies, and the test clips are all pretty good, although the 3D fad is going as fast as it came.

It's probably a good time to talk about the discomfort that you're gonna feel wearing these, which isn't limited to the headphones. The Oculus Rift weighs in at around 480 grams, while the HTC Vive is closer to 555 grams, making both pretty heavy. The Royole, however, comes in closer to 700 grams, all of which is being supported by the headphone strap and the bridge of your nose. The company advises that you push the head strap forward to take the weight of the visor, and it works, but only up to a point.

I have a theory that VR headsets feel a little lighter than their actual weight when in use, because you use them actively. After all, your head is often turning around in the virtual environment as you explore, and you're using your neck muscles more. Sitting passively, watching a movie as if you were in a cinema, means that you're not in motion, and so the weight is more obvious than it would be otherwise.

There's one other comfort issue, which is that using the Moon can get pretty hot, even on a cold fall evening. Settling down to watch a movie on DVD piped through the device's bundled HDMI adapter cable, I found that, half an hour in, my face was wet with sweat and the lenses were fogging up. Your humble narrator is a little on the hefty size, so your mileage may vary, but I doubt many would use the device's five-hour battery life to exhaustion in one sitting.

Another bugbear that you find with devices like this is the amount of effort your eyes make to keep focusing on the screen. Something about the proximity of the display to your face -- even with the corrective lenses -- forces my eyes, at least, to constantly have to focus on things. Which means that after a while, eye-strain is another reason that you'd probably not want to spend a whole flight inside one of these.

On the right earcup is the control panel, a Parrot Zik-esque tactile pad that recognizes up, down, left and right swipes as well as taps. Immediately above it, in the housing, is the volume control, where you draw your finger back and forwards to control the sound. On the left earcup is the three-feet-ish long USB-C cable that runs into what the company is elegantly calling the Box, which is, essentially, a screenless Android smartphone that includes both the battery for the headset and the software to run it.

Once booted up, it takes you into the viewer menu which lets you either access your library of movies, YouTube, the online streaming service of your choice or the web browser. Without the companion app for your phone, each one is an exercise in a lot of swiping and tapping to reach your intended destination. Then, it's just like you're using any other video player, except one that's -- you know -- strapped to your face. The idea behind the Royole Moon is to create a personal cinema that takes you away from the outside world for hours at a time. But the device's weight and heat mean that, at best, you can get half an hour inside one before you need a break. There is, however, more crucial issue that needs to be addressed, which is the question of what actually this piece of hardware is for?

Most devices have a fairly obvious USP and target audience, but the Royole Moon feels more like a tech demo for the company's AMOLED screens. Because in every context you try to place it in, there are plenty of other methods that work so much better and cost so much less. The Moon's high price precludes everyone but the wealthiest taking this on long journeys without fear of damage. And if you're dropping $800 on gear like this, you're probably better off enjoying the real-world delights of business class.

If you're an AV geek who wants to recreate the experience of a cinema at home, there are better alternatives. For this sort of cash, you can get a good 50-inch TV with decent sound and just move your couch closer to the screen. Hell, a projector and screen won't cost much more, and would offer a much more effective experience than foggy lenses.

I did think that, perhaps, it's for kids who want to game in the living room without hogging the family TV, but the same issues are prevalent. It's too delicate and expensive for sticky-fingered teens when an off-brand TV and wireless headphones could do a similar job. Which is basically the same line for everything else -- it's nice, and well-built, but who would ever think to buy one?

In this article: av, entertainment, gear, hands-on, hmd, Moon, PersonalCinema, Royole, RoyoleMoon, wearables
All products recommended by Engadget are selected by our editorial team, independent of our parent company. Some of our stories include affiliate links. If you buy something through one of these links, we may earn an affiliate commission.