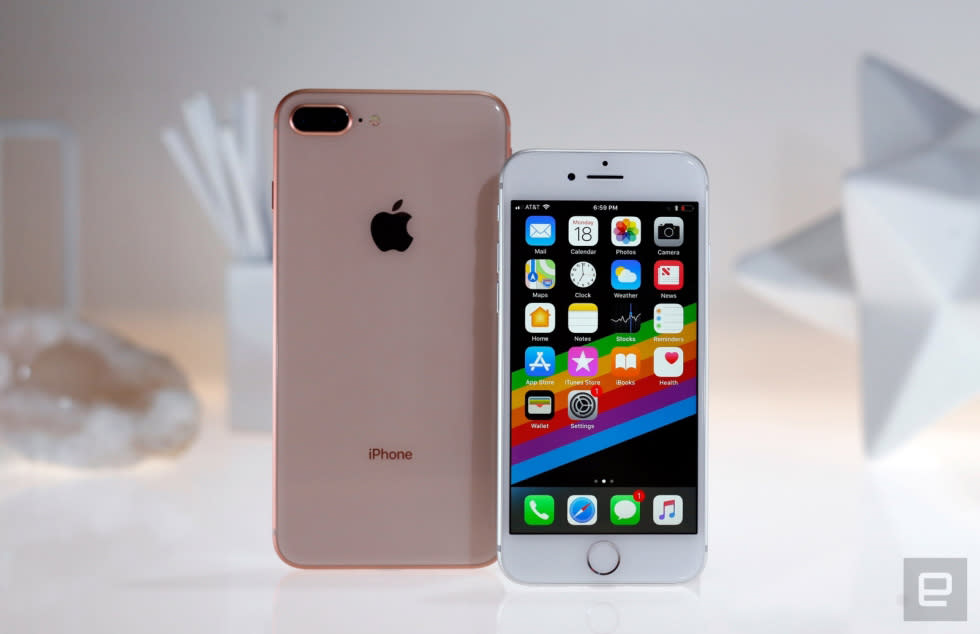 At first blush, iFixit's tech autopsy on the iPhone 8 didn't reveal anything particularly notable, besides some different screws and a way to remove the glass backing. So far, so meh. But then when it came to the laundry list of chips and modems all crammed inside Apple's latest smartphones, we noticed something. It looks like the company has made its first gigabit LTE phone, capable of substantially faster download speeds. Or at least, the iPhone 8 could have, if it had everything else.

(Update: As some readers have pointed out, the iPhone 8 (according to iFixit's teardown) doesn't appear to have the antennas necessary to harness gigabit LTE. We've updated this post to reflect that. Apologies for the mistake.)

The latest iPhones do offer support for more LTE bands and networks (depending on your model) than ever before, but its rivals appear to be ahead when it comes to gigabit LTE.

Samsung's Galaxy S8, Note 8 phones and even the Essential phone all pack gigabit LTE modems, ready to go. It'll be a mainstay of nearly all new phones going forward, and Apple's new phone, available today, starts behind its biggest competitor. Phone carriers haven't initiated the roll-out of this next-generation LTE. However, all the major US phone networks are all promising to launch gigabit LTE services by the end of 2017.

So why didn't Apple add gigabit LTE to its latest phones? Sources suggest that Apple tapped both Qualcomm and Intel for modems for this year's iPhones. Because of this, Bloomberg sources back in June, suggested that any gigabit LTE functionality would be disabled, as some phones would be compatible, those with Qualcomm modems, while others (with Intel modems) wouldn't. Intel does have a gigabit LTE modem in the works -- it apparently wasn't ready for this round of iPhones.

There's also some corporate politics here. In the middle of several of legal scuffles, Qualcomm has alleged that Apple would prevent Qualcomm-equipped iPhones from performing at full capacity so they would work just like Intel versions.

For now, your new iPhone 8 can handle all the current LTE services you're using. It may not, however, be ready for the next wave of upgraded networks at a time when rivals are primed and ready.