Traditional retail may be failing, but it's giving way to tech-infused showrooms. Marie Claire, Neiman Marcus and Mastercard teamed up to showcase some of the concepts that will be driving that development in their New York City pop-up shop, The Next Big Thing. The store is open to the public every day until Oct. 12th, at 120 Wooster Street in trendy SoHo, and according to the invite, it's "a first-to-market, hands-on retail pop-up experience bringing to life the newest innovations in fashion, beauty, entertainment, technology and wellness." Having recently covered what the future of retail would look like, I was curious to see some of the advanced technology I had heard about come to life. But after an hourlong visit, I left the store feeling underwhelmed by the lack of groundbreaking technology. 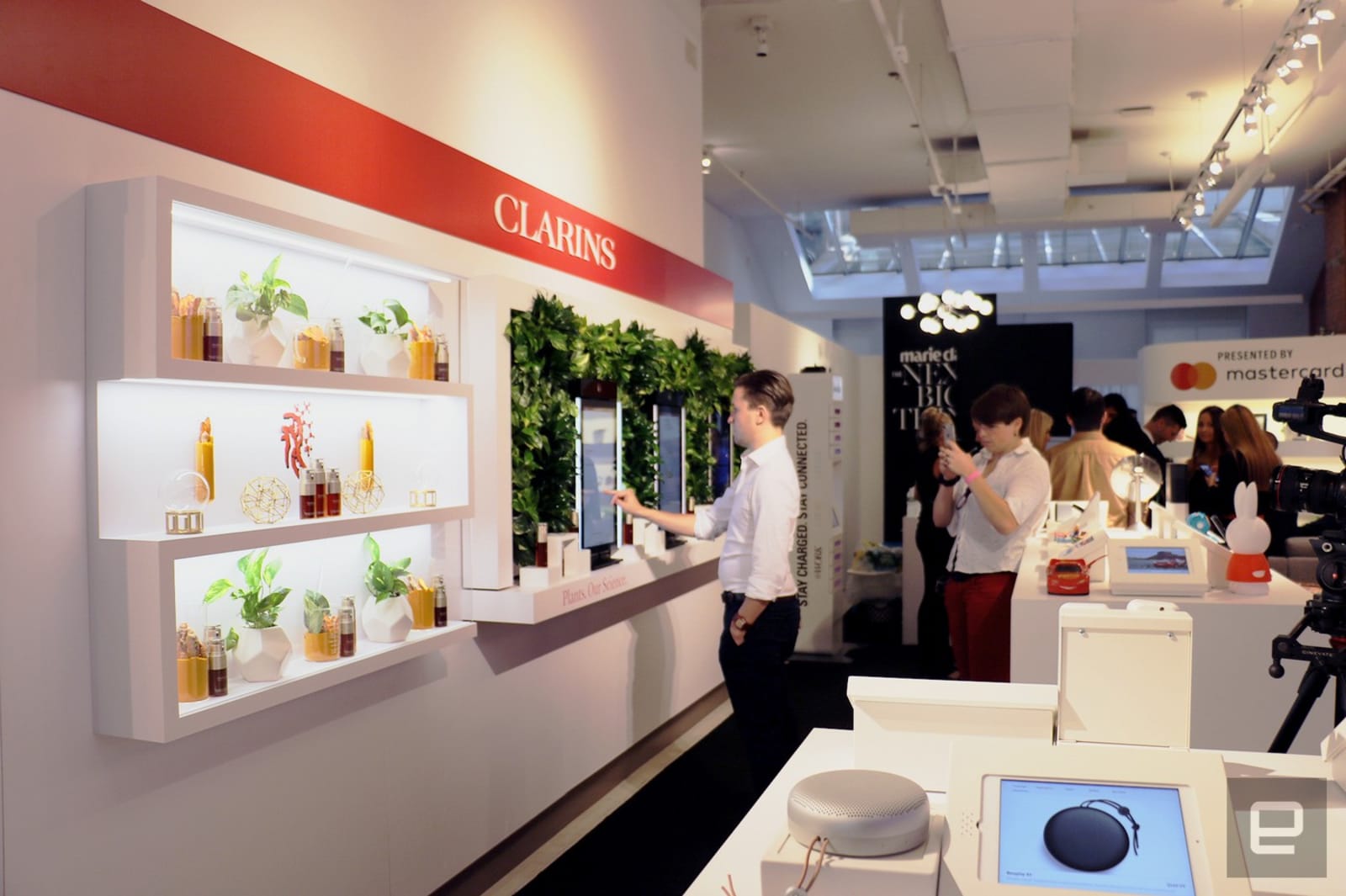 I loved all the goods on display: The clothes were stunning, and the skin-care products were tempting. As a tech reporter, I was far less impressed by the range of gadgets available. There's the Mighty Purse, which is really just a clutch with a built-in battery and charger, the Click and Grow smart herb-garden kit, and the Bang and Olufsen Beoplay A1 Bluetooth speaker. For Marie Claire's intended audience, though, who may be less concerned than I am about the best specs and the latest in tech, these seem like an appropriately stylish and trendy collection of devices.

Despite the unexciting selection of gadgets, it's the presentation of these products that left me underwhelmed more than anything else. In addition to the standard racks with hangers for clothes, there are also counters with items each accompanied by an iPad that shows you details like its dimensions, colors and price. It feels like shopping at home, except you're standing in front of the actual purse in a physical store. Unlike shopping at home, you don't have the luxury of time and a dozen open tabs to help you decide.

It's also not that much more convenient to purchase something in the store: You have to hit "buy" on the tablet, which will summon an in-store employee to finish the transaction. That's not as seamless as the setup at Amazon Go stores, where shoppers can simply pick up what they want and walk out. 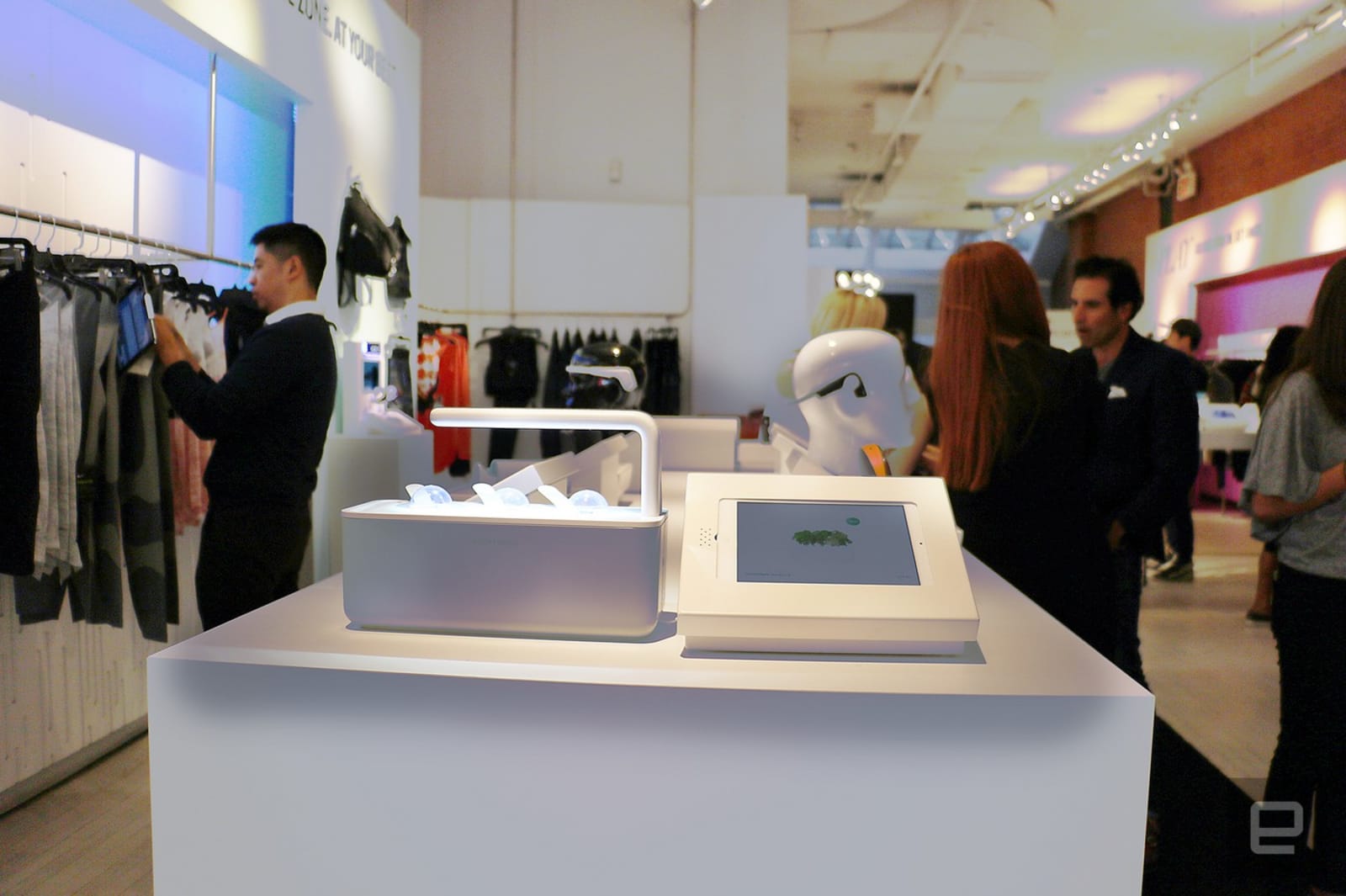 For consumers, this doesn't seem helpful, but retailers could gain valuable insight and build a better shopping experience. Overhead cameras above these counters keep an eye on how many people walk past the display and count how many linger and how long they dwell. The iPads also track what shoppers look at and interact with, so companies can understand where they're losing and winning customers. It's all pretty bare-bones right now, but it hints at a hyperpersonalized experience the industry expects will be the future of retail.

A more sophisticated example of blending technology with a highly personal experience is the row of three smart mirrors in the Marie Claire store. Featuring Clarins branding and products, the 2-foot-tall mirrors take photos of shoppers, detect potential skin-care concerns and recommend creams and serums to target those problems. 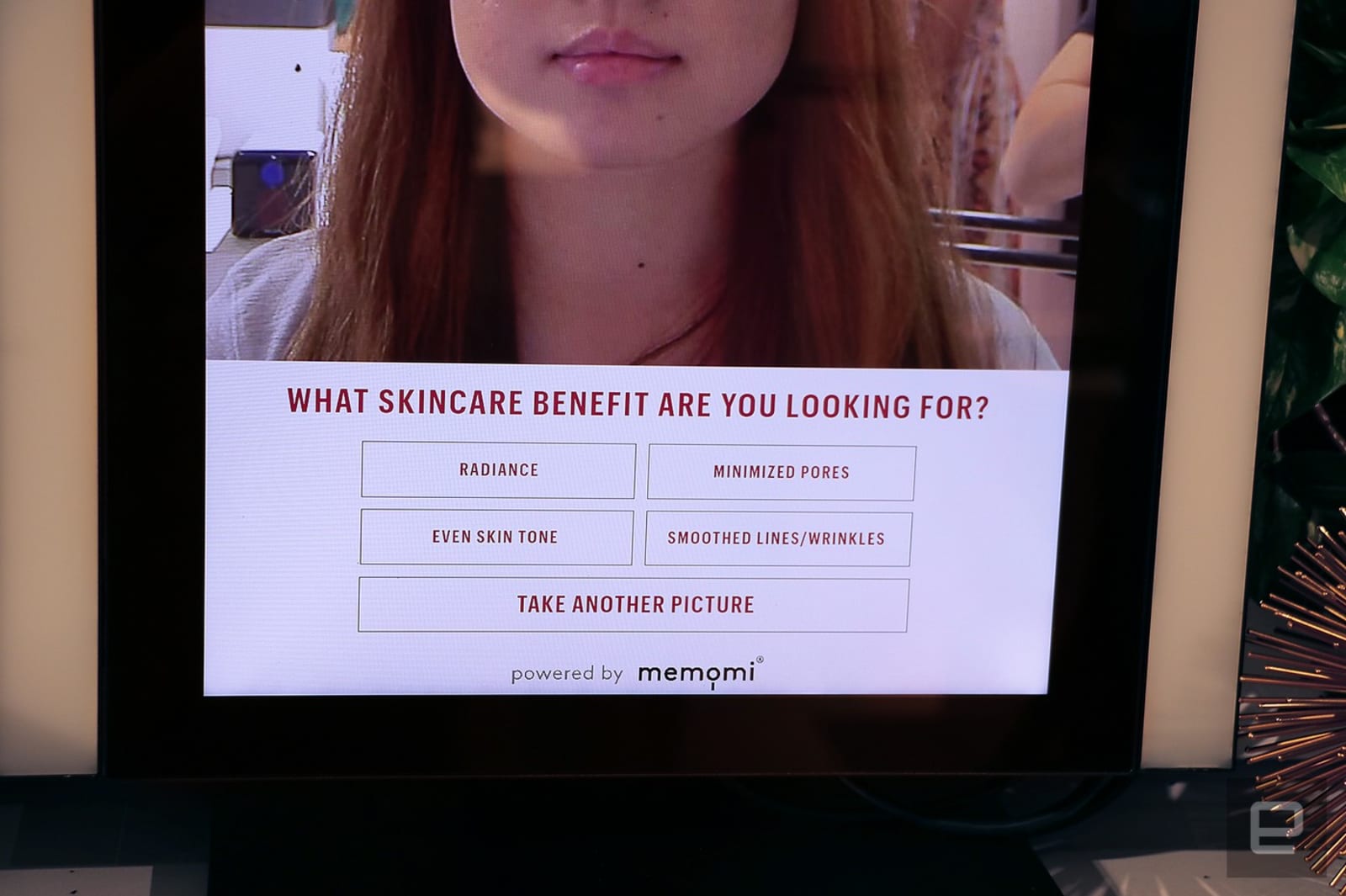 The idea isn't new: We've seen many other companies implement smart mirrors to identify individual issues plaguing shoppers, like dry skin, fine lines, wrinkles, acne or blemishes. What's more interesting is being able to eventually use these mirrors to try on different cosmetics, sunglasses or hairstyles. Of course, you can also do all that at home, but Marie Claire Vice President and Publisher Nancy Berger believes real-world shopping isn't going away anytime soon.

Beyond the social experience, some retail setups can actually make the whole process fun. She shared a story of how her son, who normally doesn't enjoy shopping, said he would go back to a store they had visited because it had a mock basketball court on-site to help customers try out different shoes.

One of the most fun parts of shopping in the real world is trying on clothes, but it can also get tiring quickly. To ease some of that frustration, interactive fitting room mirrors can get other colors and sizes to you, saving you from having to scour the store repeatedly. You'll need to book a room with a store employee to hold it for your session. Inside, the mirror detects the RFID tags on the clothes you've brought in and list them on-screen. Oak Labs, a startup that has already worked with Ralph Lauren to integrate these mirrors in some stores, opted for RFID tech to avoid using cameras. After all, you wouldn't want anyone hacking into these systems and live-streaming what goes on while you're trying on clothes. 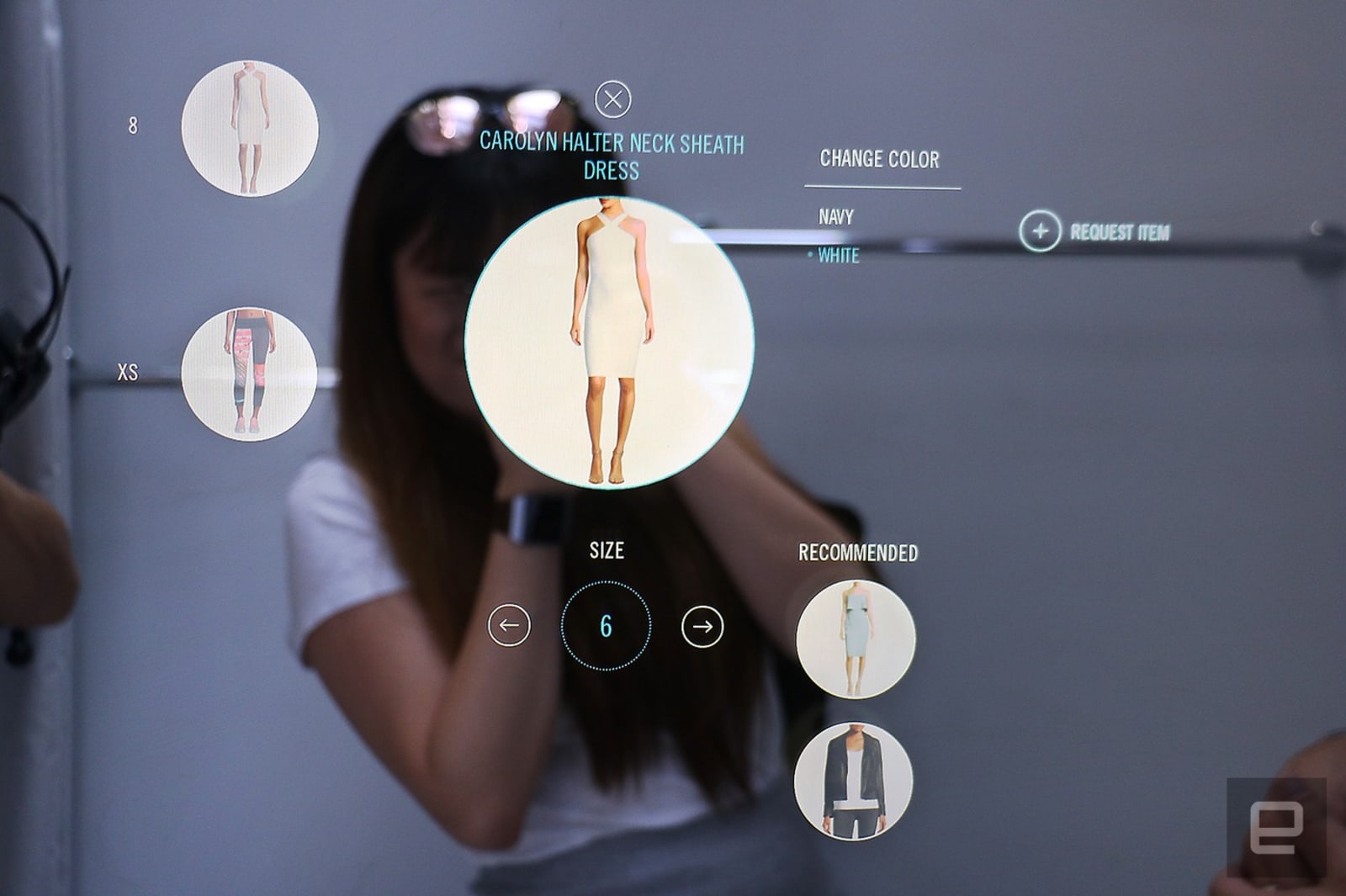 The mirror will also recommend other pieces of clothing based on your preferences, and you can see on the screen how they match with the items you already have. When you've made up your mind, you can check out from the fitting room, elsewhere in the store or even after you leave. That's because to pay for your clothes, you'll need to download the Marie Claire app (as opposed to using the previously mentioned iPads, which are meant for devices). Oak Labs told Engadget that the app is meant for shoppers to specify pickup or delivery options. That's still not a completely seamless experience, but a representative at the event said it's possible to build NFC readers into the mirrors to enable contactless payments inside the fitting rooms.

Again, connected mirrors in fitting rooms aren't new. Even the most intriguing demo at the store -- a giant touchscreen on its windows that lets passersby peruse and buy what's inside the shop -- has sort of been done before. But there hasn't been a store that's brought together all of these new concepts in one place just yet. And as Berger told Engadget, this experience isn't about showcasing bleeding-edge retail tech.

The Next Big Thing wants to educate Marie Claire's intended audience about what you can expect to see in stores over the next year, not what might be here 10 years down the road. The demos aren't groundbreaking, but the store provides a superficial glimpse of the technology that will change how we shop in the future.

In this article: business, clarins, gear, marieclaire, mastercard, NeimanMarcus, OakLabs, retail, services, shopping
All products recommended by Engadget are selected by our editorial team, independent of our parent company. Some of our stories include affiliate links. If you buy something through one of these links, we may earn an affiliate commission.