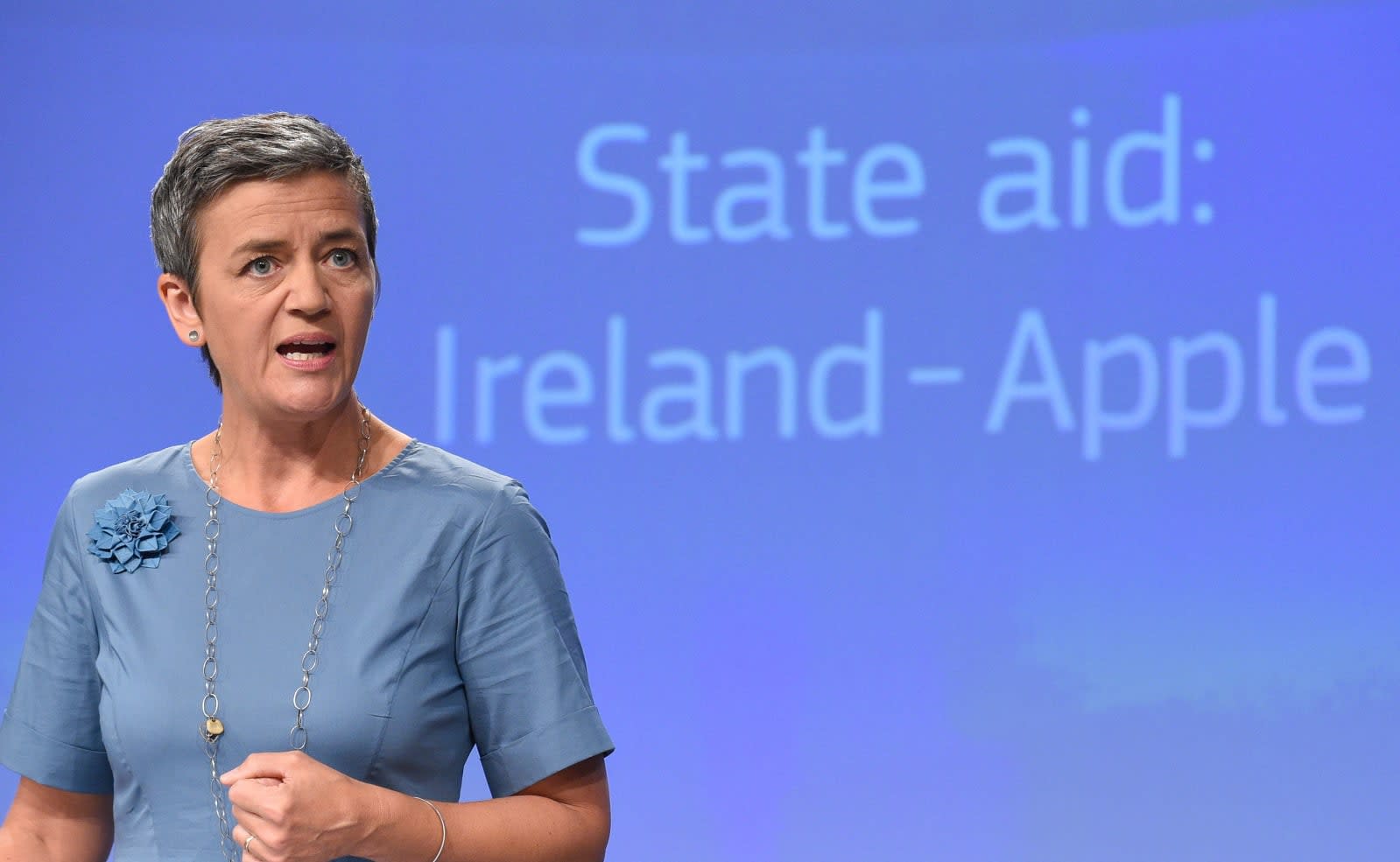 The European Commission has announced that it will refer Ireland to the European Court of Justice for not collecting back taxes that it is owed by Apple. More than a year after a sweetheart deal between Ireland and the iPhone maker was ruled illegal, the country has dragged its feet in asking Tim Cook for the cash. Tired of waiting around, Commissioner Margrethe Vestager (pictured) has referred the nation to the continent's highest court, which can then impose fines for non-compliance.

The backstory here is that the European Union wants to create a functional free and open market that allows competition to flourish. But some nations, looking to host big name companies, could be tempted to either give them a whopping tax break or actively fund their development costs. These deals, known as "state aid," are known to distort the market and make the playing field far more uneven than it should be.

Back in 1991, Apple signed a deal with the Irish government that let it use a special tax loophole called the "double Irish." It's believed that Apple has used the loophole to store two thirds of its non-US profits inside this tax haven. The result is that Ireland essentially turned a blind eye to the better part of $14.5 billion that it would have been owed had the loophole not existed. The EU opened an investigation into the deal in 2013, and in 2016 demanded that Ireland collect the cash.

Ireland doesn't feel that it's doing anything wrong, and has appealed the decision of the court declaring the tax break as illegal. As The Independent points out, Ireland relies on foreign investment for many of its jobs, and doesn't want to collect the cash for fear of alienating other businesses. That said, the country has pledged to collect the tax, but claims that it won't be in a position to know how much it will ask for until March 2018. That's not good enough for Vestager or the law, which says that EU states have just four months from the decision to get moving -- meaning that Ireland should have sent a strongly-worded letter to Apple by January of this year.

The issue of Apple's taxation is a contentious one, but the company has drawn ire even in the United States. In 2013, Senator Carl Levin penned a report examining that Apple managed to negotiate its global tax rate down to just two percent. In the US, it would have to pay at least 15 percent. Tim Cook, however, believes that Apple should only be taxed where its value is created -- i.e. only at the company's R&D sites in California.

In response, Ireland's Department of Finance said that it is complying with its obligations, even if it doesn't agree with the decision of the court. It feels that Vestager's decision to hurry the process along is "extremely regrettable," since parsing out $14.5 billion in tax is pretty complex. It'll be interesting to see how this plays out, and how it effects Ireland's relationship with the technology giant going forward.

Ireland has never accepted the Commission's analysis in the Apple State Aid Decision.

However, we have always been clear that the Government is fully committed to ensuring that recovery of the alleged Apple state aid takes place without delay and has committed significant resources to ensuring this is achieved. Ireland fully respects the rule of law in the European Union.

That is why it is extremely disappointing that the Commission has taken action at this time against Ireland.

Irish officials and experts have been engaged in intensive work to ensure that the State complies with all its recovery obligations as soon as possible, and have been in constant contact with the European Commission and Apple on all aspects of this process for over a year.

It is extremely regrettable that the Commission has taken this action, especially in relation to a case with such a large scale recovery amount. Ireland has made significant progress on this complex issue and is close to the establishment of an escrow fund, in compliance with all relevant Irish constitutional and European Union law.

The work on the establishment of the escrow fund to deal with the unprecedented recovery amount will continue, notwithstanding the fact that Commission has taken this wholly unnecessary step.

In this article: apple, Eu, Europe, gear, Ireland, MargretheVestager, politics, StateAid, Tax, Taxes, TimCook
All products recommended by Engadget are selected by our editorial team, independent of our parent company. Some of our stories include affiliate links. If you buy something through one of these links, we may earn an affiliate commission.