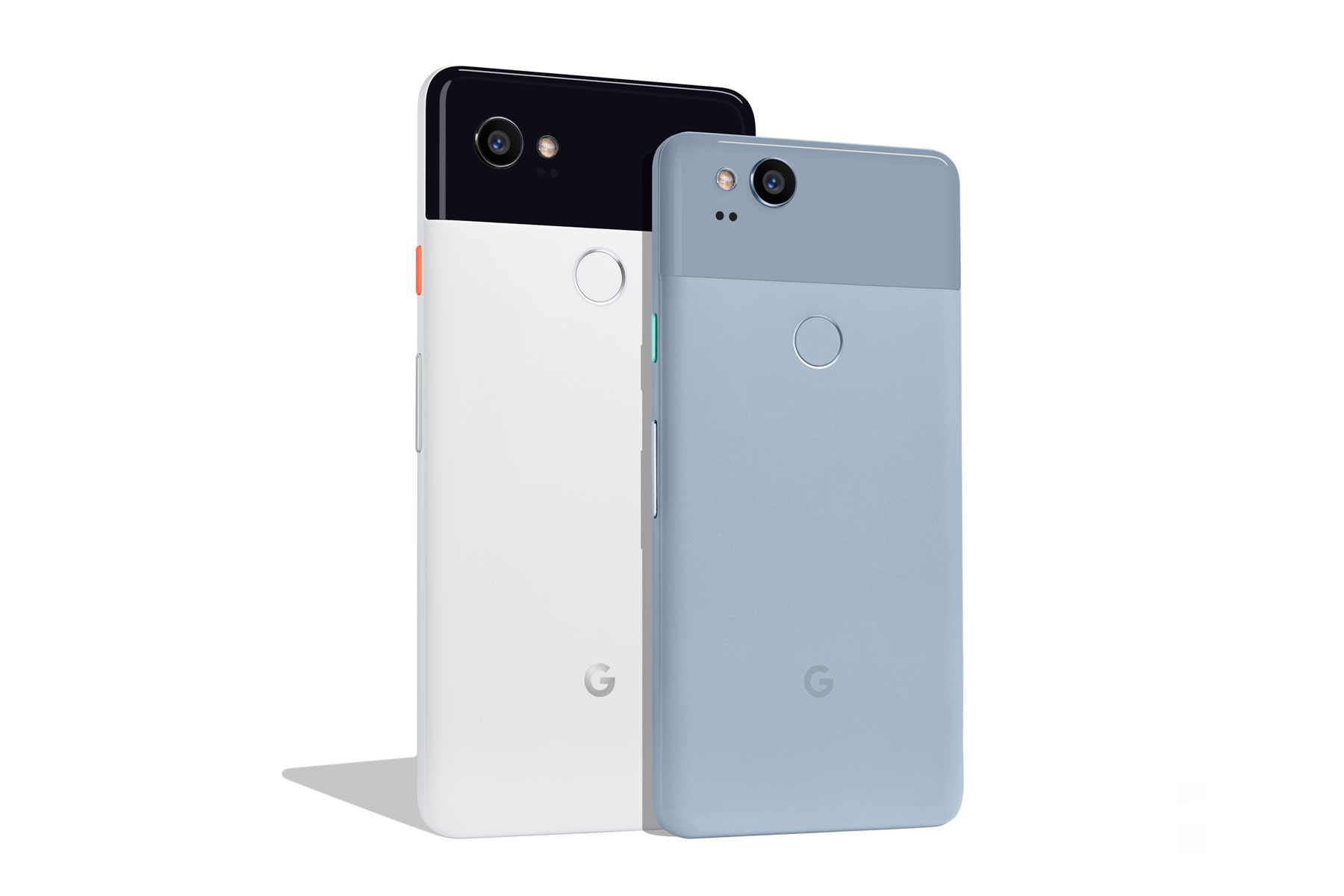 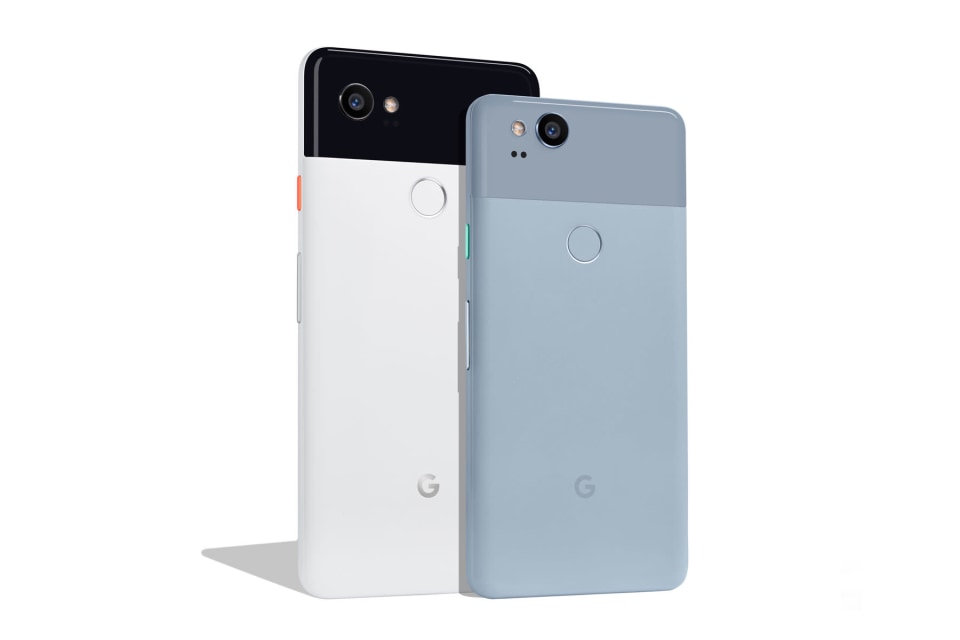 Google has announced the second generation of its venerated Pixel handsets, the Pixel 2 and its larger sibling, the Pixel 2 XL. Rather than attempting to compete on specifications, the company is hoping that its software know-how and a refined design will woo customers. The headline feature, perhaps, is that the Pixels will abandon the 3.5mm headphone jack on its smartphones. Instead, users will need to connect their analog headphones using the bundled 3.5mm USB-C adapter. The search giant has also made a big deal about the fact that there is feature parity between both handsets -- a swipe at Apple, which saves more-advanced camera features for its Plus devices. One of the features is an always-on display that constantly shows you the time and your notifications. The device will also have a persistent music-spotting feature like Shazam, for when you want to know what's playing in the coffee shop.

The Pixel 2's cameras are also getting an upgrade, with the primary lens packing a 12.2-megapixel sensor with an f/1.8 aperture and OIS. This lens will be coupled with Google's computational-photography smarts to offer a variety of features that other manufacturers need two distinct lenses for. That includes portrait mode on both the front and rear cameras and smoother video, thanks to a combination of optical- and digital-image stabilization.

Those concerned about storage woes, given the quantity of photos they are likely to take with these devices, can rest easy as well. Google has once again reaffirmed its commitment to storing every photo taken with the Pixel 2 in full resolution on its web servers for free.

As for specifications, the Pixel 2 is packing a 5-inch AMOLED screen with an FHD resolution (1,920 x 1,080) while the XL is packing a 6-inch QHD+ pOLED display (2,880 x 1,440). Inside you'll find a Qualcomm Snapdragon 835 paired with 4GB RAM and either 64 or 128GB of storage. The smaller handset is packing a 2,700mAh battery while the larger has a whopping 3,520mAh cell. Both displays are protected from the elements with a slice of Corning Gorilla Glass 5.

As for software, the device will also ship with Android 8.0 Oreo, contrary to some rumors that it would arrive with 8.1. The company is guaranteeing that the handset will be supported for a minimum of three years, reassuring users who may be concerned about missing out on future updates. There's also the option to use an eSIM, although the handset will accept a single nanoSIM card.

Both handsets are also water and dust resistant to IP67 and fast charging, with the company promising that 15 minutes of charging will give you seven hours of life. There are also a pair of stereo speakers flanking the front of the display, although the company has yet to explain much about their power and potential.

At the event, Google's hardware chief Rick Osterloh spoke about how the field for smartphone manufacturers has flattened. After all, the components that go inside every Android device are pretty much the same, to the point where it's hard to tell one from another. That's why the new Pixels (alongside the rest of Google's new products) are leaning in hard on AI and software tweaks as their key selling points. Osterloh described them as "radically helpful," capable of anticipating your needs before you know you need them.

Part of that initiative, as well as the always-on display, is a notification pane embedded into the home screen that informs you of important calendar appointments. Meanwhile, a Google search bar remains persistent at the bottom of the menu, enabling you to search both your phone and the web at the same time.

Similar to the HTC U11's squeeze-sides feature, you can pinch the bezels of the Pixel 2 to summon Google Assistant. Another feature is summoning Assistant during your commute simply by declaring that you're about to drive home. The system will surface GPS directions, resume a podcast or song that was played the last time you were in the car and read out instant messages.

Google received plenty of praise for the Pixel from everyone except the people who actually wanted to buy one. That's because the company has struggled to produce enough devices to cope with demand, distressing many in the Android faithful. Back in April, Android Central opined that even six months after launch, would-be purchasers were left waiting weeks, or months, for a phone. Around the same time, PhoneArena described the device as "vaporware," because of the long wait times. It was enough of a problem that Osterloh even joked about it during the keynote, saying that he wished there were "more to go around."

Between then and now, Google has, at least, bolstered its R&D division in the hope of making future devices more compelling. The company spent $1.1 billion on buying up HTC's "Powered by HTC" arm that was, until recently, working on Pixel devices outside Google. It wouldn't be unreasonable to hope that some of the new hires may have more experience with what's required to get a phone out the door.

The Google Pixel 2 will ship in a trio of colors: Kinda Blue, Just Black and Clearly White while the XL is clad in either Just Black or Black and White. Pricing for the smaller device with 64GB memory begins at $649 while the XL will initially set you back $849. Pre-orders begin today, with every user who does pre-order getting a Google Home Mini as a sweetener, although we don't know when these phones will actually ship. The company has announced that it has Verizon on hand as a launch partner, and you'll also be able to buy it on the company's own Fi network.

In this article: gear, google, GooglePixel, mobile, pixel, pixel2, pixel2event, pixel2xl
All products recommended by Engadget are selected by our editorial team, independent of our parent company. Some of our stories include affiliate links. If you buy something through one of these links, we may earn an affiliate commission.