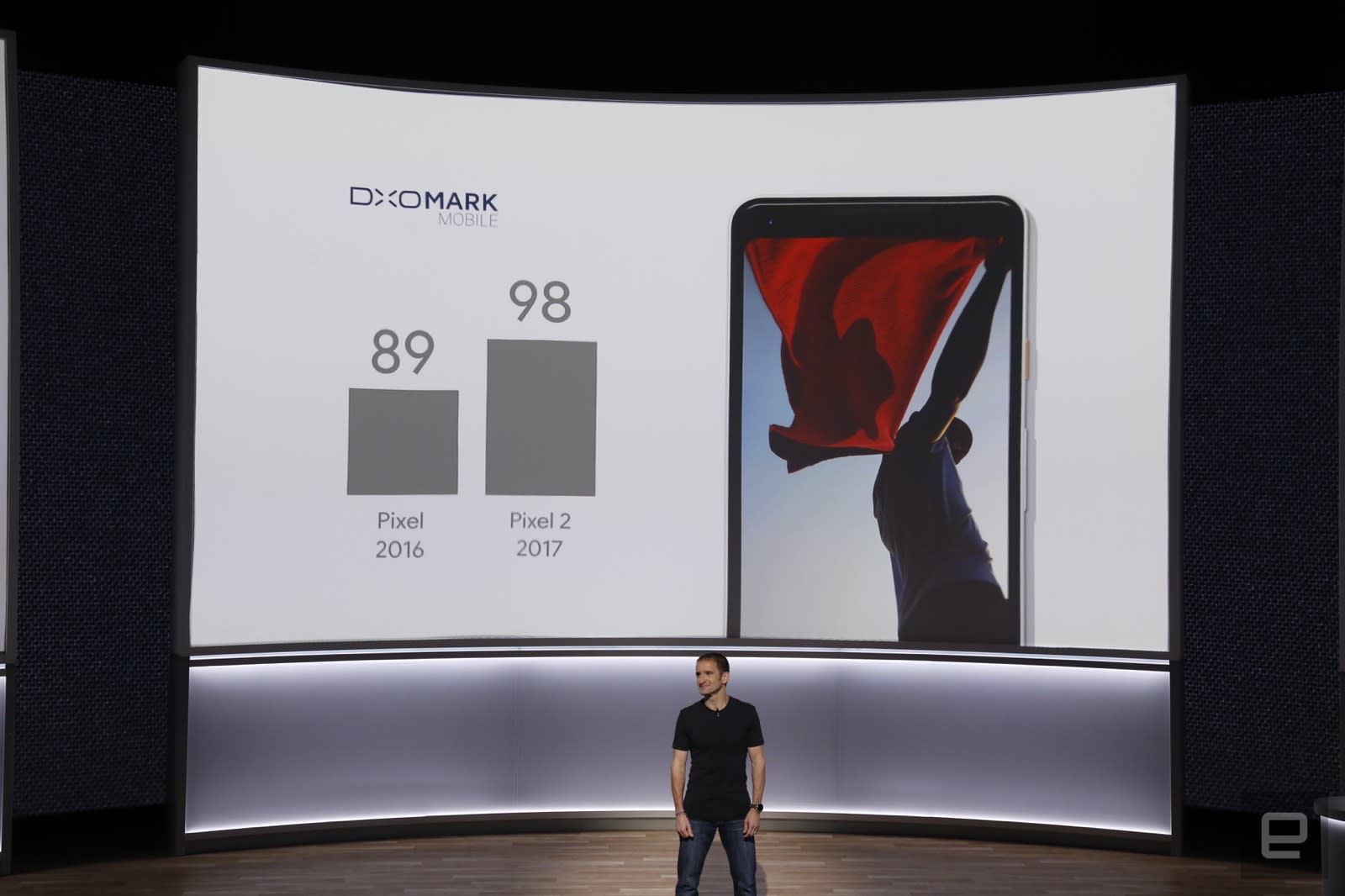 Google was quick to brag about the original Pixel's camera prowess last year, and it's continuing with that confident stance now that the Pixel 2 and Pixel 2 XL are here. Both phones use the same 12-megapixel rear camera, and have received an unprecedented overall DxOMark test score of 98 -- that's four points higher than the previous leaders, the Galaxy Note 8 and iPhone 8 Plus. If you ask Google, it's a combination of the hardware with its computational intelligence.

The key for most is that it pairs Google's existing software-based stabilization with optical stabilization -- that should lead to fewer blurry shots and less noise in low light. Rival phones tend to only use one stabilization method at a time. You can also expect quick autofocus through dual-pixel phase detection, and a portrait mode that creates DSLR-like soft backgrounds using only one camera (whether it's the back camera or the front 8-megapixel shooter). You don't need dual cams or a depth sensor here, folks.

As good as this sounds, though, there are some limits that Google isn't discussing. The Pixel 2 line might not need dual cameras to do portrait modes, but that also means you aren't getting optical zoom, a wide-angle lens or other perks that come with dual cams. If you're too far from a concert stage to get a good shot, it won't matter how good that one camera sensor might be. And given that the Pixel 2 phones use the same Snapdragon 835 chip as Android phones from earlier in 2017, you probably won't capture 4K video at 60 frames per second.

There's also the question of whether or not synthetic camera tests like this tell the whole story. While the original Pixels did end up having excellent cameras in practice, there were still flaws (for example, that lack of optical image stabilization) that didn't become fully apparent until the public got its hands on the hardware. The DxO score is a good sign, but it's worth being skeptical about Google's claims until more people have had a chance to try the Pixel 2's camera tech for themselves.

An earlier version of this report had a video that was removed for accuracy.

In this article: cameras, dxomark, gear, google, mobile, photography, pixel2, pixel2event, pixel2xl, smartphone
All products recommended by Engadget are selected by our editorial team, independent of our parent company. Some of our stories include affiliate links. If you buy something through one of these links, we may earn an affiliate commission.