The search giant has heard your complaints.

Samsung's Gear VR ushered in an age where we strap our phones to our faces for entertainment. But when it debuted last year, Google's $79 Daydream View managed to make the whole process look just a little less geeky. To coincide with the launch of its new Pixel smartphones, Google whipped up an updated version of the Daydream View that costs $20 more than the old one. So, what's actually new here? Quite a bit, as it turns out.

First off, no one could blame you for having trouble telling the new Daydream View apart from the old one. Google's cozy design language is still in full effect — it's all gentle curves and soft fabric here -- and you still just place the phone onto the headset's flap and cinch the whole thing shut with a bit of elastic.

Don't be fooled though, there's more going on with the new View than you might expect. Some phones were prone to overheating and shutting down in the original headset. Obviously, this is no bueno for a device that sits so close to your face, so Google added a magnesium heatsink to help phones shed heat.

So far, it seems to be working pretty well. I spent the better part of my weekend sitting on the edge of a virtual lake angling for virtual fish in hourlong chunks, and the Pixel 2 only got about as warm as it did after playing a typical mobile game. Then again, your mileage may vary depending on how long you stay in your virtual realm of choice — most of my time with original Daydream was spent watching videos or playing games like Keep Talking and Nobody Explodes in short bursts. 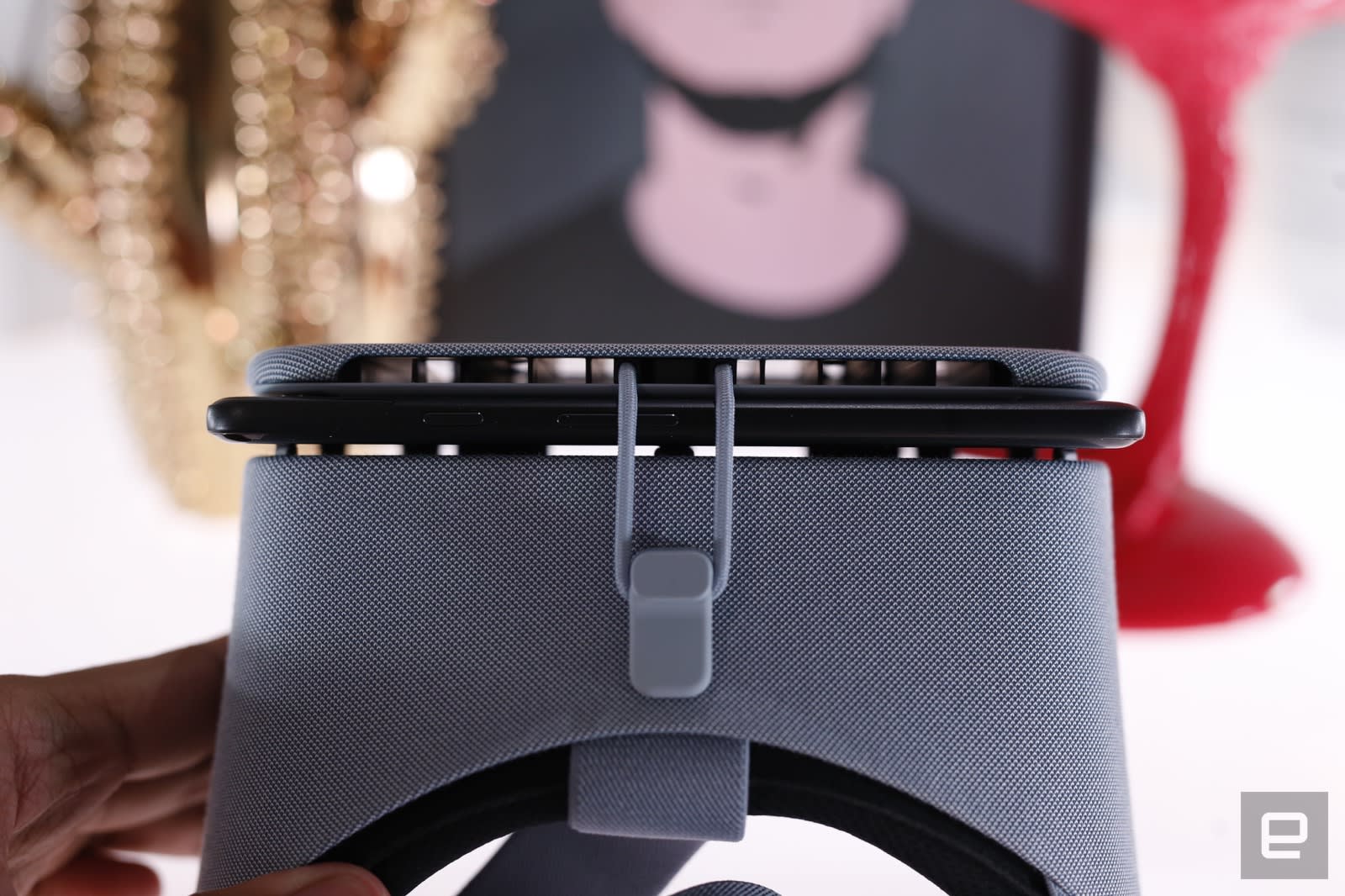 This has its drawbacks, though. The heatsink's placement means you can't just stick the Daydream controller into a slot on the front flap anymore. Instead, Google stuck an extra elastic loop on the back of the new View's headband for the controller. It's functional, sure, but it's far less elegant than Google's original solution. At least the controller's buttons are more pronounced so you'll never mix them up. The Home button feels a touch more concave than before, and the Apps button is raised instead of flat.

More important, the new View is much better at shutting out stray light that can distract from the VR experience. The original was notorious for letting light bleed through small gaps where the headsets rested on people's noses, and I'm glad Google finally got around to fixing it by improving the foam cup your face pushes up against. You'd think a more secure seal against your face might get a little uncomfortable, especially because the View largely relies on a single elastic strap to keep everything snug. Not so. The pad that presses into your face now seems to spread the weight around more evenly, and the new View comes with an extra strap that sits atop your head to help make the whole thing a little less front-heavy.

Gallery: Up close and personal with the new Daydream View | 10 Photos

The other major change to the View's design becomes apparent when you look into the headset for the first time. Comparatively speaking, the new Fresnel lenses used to magnify a phone's screen are huge. Google made the change to increase the headset's virtual field of view by 10 percent, and while that sounds like a pretty modest bump, it meant I take in more of whatever world I was in at a glance. More important, these new lenses also make the sweet spot -- that point where your eyes can perfectly focus on the screen -- a little larger than before. After five or six minutes of trial and error, I got the ideal strap lengths locked in, and I've been staring at the sweet spot ever since.

So yeah, the hardware has been improved in subtle, helpful ways. The software experience, meanwhile, hasn't really changed. You'll be plopped into the same virtual forest in front of the same virtual menu to access the same virtual apps. That's what makes the new Daydream such a hard sell: Because all of the heavy lifting is handled by the smartphone, the actual experience isn't hugely different from before. When it comes to content, Google still has a ways to go -- at current count, Google has around 250 Daydream apps, but the Gear VR's head start still means it has a stronger catalog of exclusive apps to work with. In particular, Samsung and Oculus' mobile headset has a better selection of licensed experiences -- you'll need a Gear VR if you want to cruise through Blade Runner's techno-noir LA or peer into a handful of Disney-themed worlds.

Ultimately, the new Daydream View is a solid new choice for people with compatible phones looking for a crash course in virtual reality. If you already have an old View and haven't run into the trouble others have, there's no pressing need to upgrade. And if you fall into the category of people who yearn for a more powerful mobile VR experience, well, you should probably just wait for Google's standalone headset instead.

All products recommended by Engadget are selected by our editorial team, independent of our parent company. Some of our stories include affiliate links. If you buy something through one of these links, we may earn an affiliate commission. All prices are correct at the time of publishing.
View All Comments
Google’s second Daydream headset is all subtle improvements