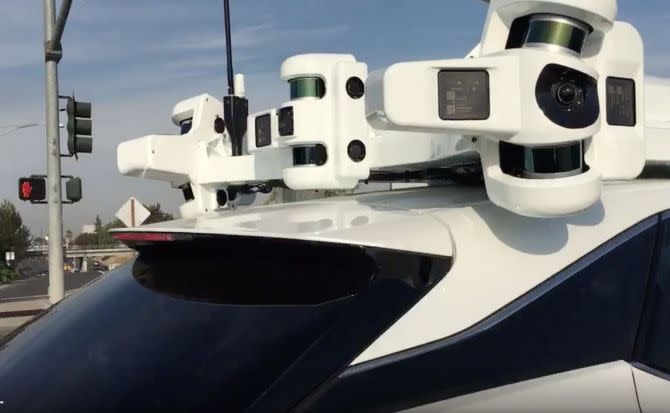 Like so many companies, Apple has been working on its own version of self-driving technology. Last year, we learned that the company had moved away from designing its own vehicle, opting instead to develop a system that could be incorporated into existing vehicles. We've had glimpses of this system before -- it's codenamed Project Titan -- but thanks to Voyage cofounder MacCallister Higgins, we now have an up-close view of it.

Higgens posted a short video on Twitter of a Lexus SUV topped with Apple's sensor array, which he called "The Thing." He also said that the majority of the compute stack is likely contained within the roof unit itself, rather than stored elsewhere in the vehicle, and noted that it had six LiDAR units on the front and back. Such a self-contained unit would be pretty easy to pop onto any car really without requiring many additional modifications to the vehicle itself, which is probably why Apple has opted for such a design.

You can take a peek at Apple's roof array in Higgens' video above.

In this article: apple, AutonomousVehicles, gear, LIDAR, ProjectTitan, Self-drivingCar, transportation, video, voyage
All products recommended by Engadget are selected by our editorial team, independent of our parent company. Some of our stories include affiliate links. If you buy something through one of these links, we may earn an affiliate commission.