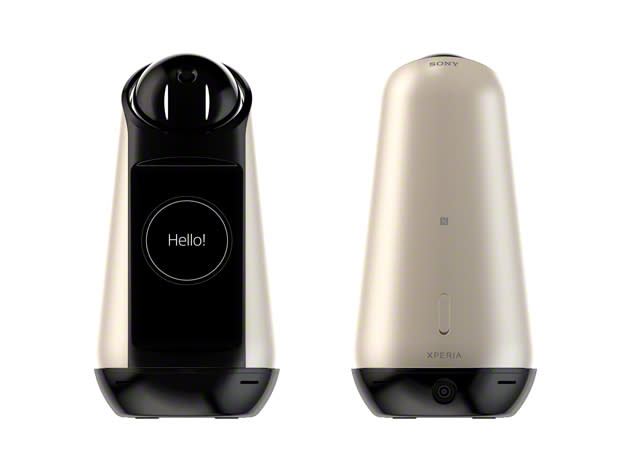 We've discussed some of Sony's absurdly priced endeavors recently -- the absurdly priced Xperia Touch projector comes to mind -- and now here is another one. The Xperia Hello, a robotic assistant designed to rival Amazon's Alexa speakers, is now available for preorder in Japan. The price is advertised as 149,880 yen at Sony Stores, which is equivalent to about $1,300. Devices will ship starting November 18th.

What do all those dollars buy you with the Xperia Hello? Engadget Editor James Trew had a few minutes with the device at IFA and came away impressed with its performance (before the pricing was announced, of course). The robot responds to voice control, but it also can read facial expressions and gestures. It runs on Android and has an onboard 4.55-inch tablet with a resolution of 1,280 x 720.

Otherwise, it has the features you'd expect from a smart speaker with an LCD screen. You can make video and voice calls via Skype, as well as leave video messages for other people. The speaker can also deliver calendar notifications, make new appointments, check the traffic and weather, and keep an eye on other members of your family in the house. Xperia Hello is also compatible with LINE, a popular Japanese messaging system; additionally, it can move around on its own.

The features are pretty standard, so it's difficult to justify the high price of this device. Many of Amazon's smart speakers can do similar tasks for a fraction of what this costs, and with this Sony speaker, you're locked into the company's proprietary Agent platform (a rival to Alexa). Sony wants consumers to think of this as a robot and a member of the family, rather than just a smart speaker. But until it can actually drive to the coffee shop and bring me a latte, it's safe to say that this device is overpriced.

In this article: gear, robots, sony, xperiahello
All products recommended by Engadget are selected by our editorial team, independent of our parent company. Some of our stories include affiliate links. If you buy something through one of these links, we may earn an affiliate commission.