Qualcomm may have found a worthy ally in its quest to take on the PC market. After unveiling a new stable of Snapdragon 835-powered "Always Connected" PCs from HP and ASUS, the chip-maker revealed a surprise partner: AMD. The two companies are teaming up to make Always Connected PCs on AMD's "Ryzen" mobile platform while using Snapdragon LTE modems to enable gigabit connection speeds. On gigabit LTE, you could potentially download a feature-length movie over cellular data in less than 30 seconds.

AMD unveiled its Ryzen mobile chips, which feature integrated Radeon Vega graphics, in October. Ryzen CPUs were designed to provide desktop-class performance while still allowing for a small enough footprint for thin-and-lights. The company has revealed two Ryzen mobile processors so far, both of them quad-core chips with eight threads -- a similar architecture to Intel's eighth-generation laptop chipsets.

The higher-end Ryzen has 10 Vega graphics cores, helping it blow away Intel's integrated graphics on benchmarks that AMD ran. For gamers on the go, the Ryzen chipsets can provide decent frame rates for midrange games like League of Legends or Overwatch. Intel's chipsets can go up to 4.2GHz, though, while the higher-end model can only reach 3.8GHz, so AMD's chips may not be as fast in bursts. 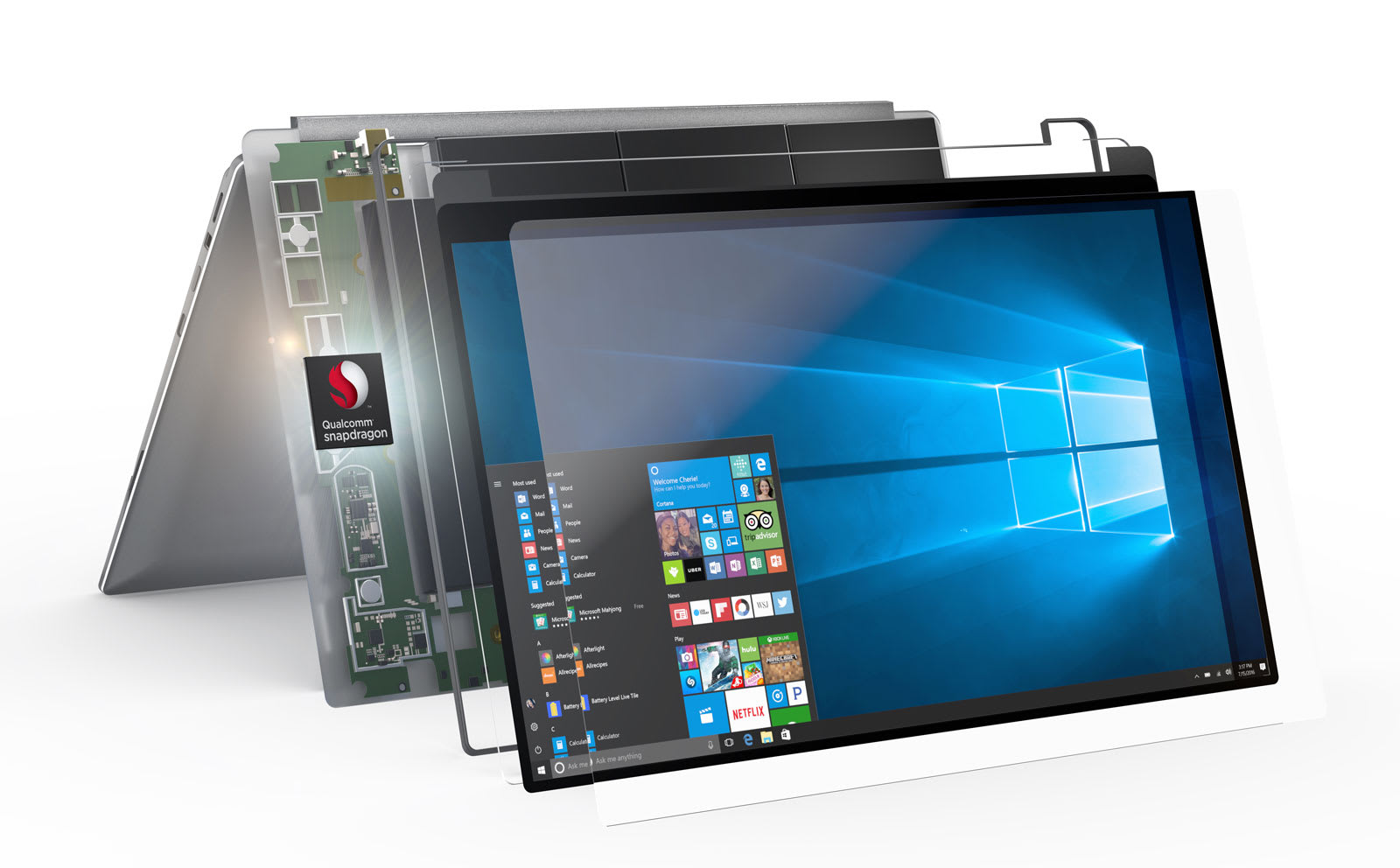 Marrying this performance with Snapdragon's X16 LTE modems means that laptops borne from this union could be powerful enough for online gaming over cellular connections. AMD's director of product management, David McAfee, described some of the "unprecedented" possibilities to Engadget. You could, for instance, play an esports game or an MMO title while you're on the road over LTE, thanks to low latency and high bandwidth over today's LTE connections.

McAfee also expects AMD and Qualcomm's collaboration to facilitate "fundamentally transformational user experiences" for business travelers, thanks also to technologies like eSIM, and the ability to switch between carriers or buy packs of data around the world. These are all concepts that were discussed when Microsoft and Qualcomm announced Always Connected PCs at WinHEC last year.

But even though the Snapdragon 835 chipset is a capable processor for smartphones, it's not going to help Qualcomm compete with Intel, the other chip maker working on Always Connected PCs. In May, Intel announced it would support eSIM in all its existing and upcoming modems, making itself compatible with the Always Connected PC ecosystem. With AMD's participation, Qualcomm now has the means to provide more power for laptops that can handle more intensive multitasking beyond the limits of a chip designed for smartphones.

But because no actual product has been unveiled, it's hard to know exactly what to expect. McAfee said AMD's part in this collaboration "is to engineer the experience with Qualcomm so all the parts about stability and software stacks are second to none." That means it'll spend days in labs, testing the mainboards it created with Qualcomm's radios to make sure the parts play nice with each other and work well with the Windows software.

It's been an interesting year for AMD, which seems to be emerging from Intel's shadow. Its Ryzen desktop and mobile processors launched in February and October to positive reception in the industry. Even Intel, AMD's archrival, is now asking for occasional help. A few weeks ago, Intel unveiled a series of enthusiast chipsets that combine its CPU with semi-custom AMD GPUs for stronger graphics performance.

Neither AMD nor Qualcomm has revealed many details beyond confirming their partnership. They've been working together for years. Since 2011, Qualcomm has provided the wireless WAN components for AMD's platform. McAfee said this is meant to be an evolving collaboration that will "play out over generations." In other words, in years to come we might even see them make a chip together. "Maybe that's in the cards in the future," McAfee said.

Still, as it stands, this is intriguing news for the Always Connected PC ecosystem, since it means that future laptops built with Qualcomm radios won't be restricted to smartphone-level performance. At the very least, this gives Intel some competition in this space, and that's good news for consumers.