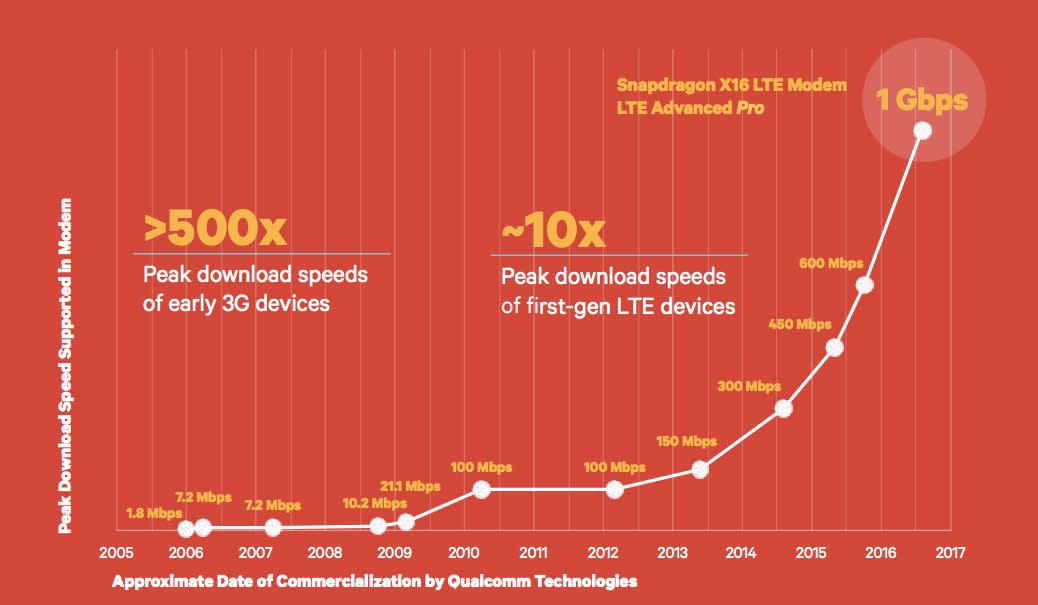 While our wireless carriers bicker over who offers the fastest service, Qualcomm went and pulled back the curtain on the Snapdragon X16 modem, a dry sounding bit of networking tech with huge implications. With it comes the promise of insanely fast gigabit LTE download speeds... but shouldn't hold your breath waiting see your Ookla Speedtest results shoot through the roof.

The X16's secret sauce has two ingredients. First, it uses its four antennas and some clever signal management know-how to connect to 10 LTE data streams from only three carrier-aggregated 20MHz carriers. Long story short, each of those streams can carry data at up to 100Mbps, giving us the magical 1Gbps figure. Second, the X16 supports LTE Advanced Pro, which (among other things) means the modem can play nice when carriers tap into swathes of unlicensed spectrum to increase the number of connections they can have going at one time. Too bad this tech won't wind up in the new Snapdragon 820, though; the first X16-friendly devices should show up in the second half of the year.

Here's the thing, though — as awesome as all of this sounds, the chances of actually full gigabit LTE speeds are slim even if a network operator uses unlicensed spectrum to amplify the number of connections it can hang onto at one time. Given our growing demand for data, though, you can bet that we'll get very close before long. Samsung and Korean wireless carrier KT cooked up a kind of hybrid network tech called GiGA LTE that has a theoretical max speed of 1.17Gbps, though it's not clear how many Galaxy S6 and S6 Edge owners are getting speeds even close to that.

In this article: carrier, carriers, gear, gigabit, lte, mobile, modem, qualcomm, smartphone, snapdragon, snapdragonx16, wireless
All products recommended by Engadget are selected by our editorial team, independent of our parent company. Some of our stories include affiliate links. If you buy something through one of these links, we may earn an affiliate commission.