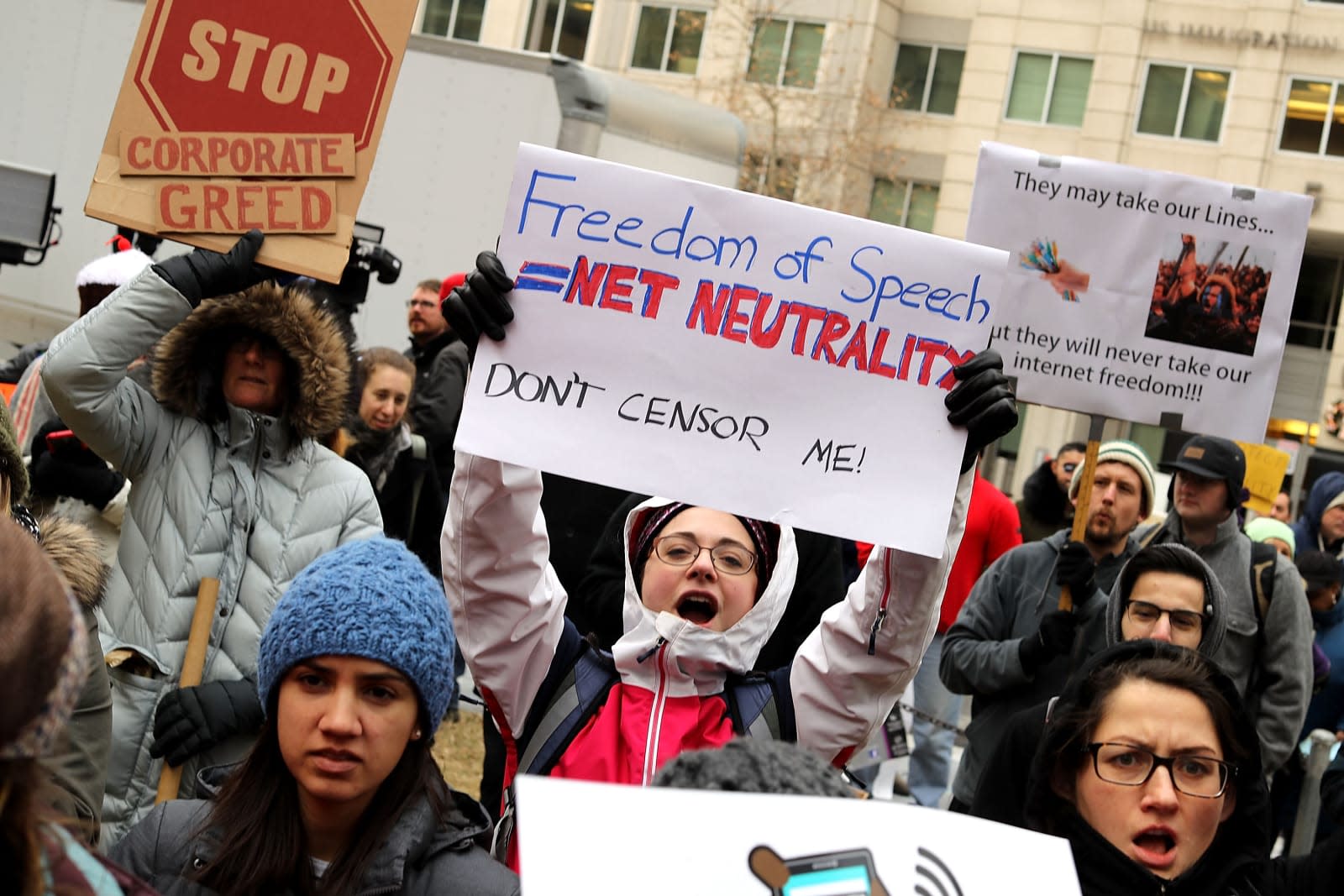 Today, with a three to two vote, the FCC voted to repeal net neutrality protections put in place in 2015. While Commissioners Clyburn and Rosenworcel made it very clear how much they disagreed with the move in their dissents, others are also voicing their concerns over the decision.

Netflix tweeted, "We're disappointed in the decision to gut #NetNeutrality protections that ushered in an unprecedented era of innovation, creativity & civic engagement. This is the beginning of a longer legal battle. Netflix stands w/ innovators, large & small, to oppose this misguided FCC order." While Google released a statement saying it was still committed to promoting net neutrality.

The Electronic Frontier Foundation said that the FCC's vote was a major mistake and one that it would continue to fight against in court. And New York Attorney General Eric Schneiderman has already released a statement saying he will be taking this decision to court. "New Yorkers deserve the right to a free and open internet. That's why we will sue to stop the FCC's illegal rollback of net neutrality," he wrote. "This is not just an attack on the future of our internet. It's an attack on all New Yorkers, and on the integrity of every American's voice in government – and we will fight back."

The FCC's decision to abandon its traditional role in protecting an open and free Internet will go down as one of the biggest mistakes in Internet policy history.

We will fight in the courts, in the states, and in Congress to restore #NetNeutrality.

The ACLU has also joined those saying that the decision was wrong, calling it a "radical and foolish action." It added, however, that the fight for net neutrality wasn't over. "But nobody should think that network neutrality is dead. We at the ACLU and our allies will be fighting back — at the federal, state, and local level — to restore the protections that the FCC has now eviscerated," it said in a statement.

Senator Brian Schatz, a member of the Senate Subcommittee on Communications, Technology, Innovation and the Internet said in a statement, "Today, Trump's FCC dealt a major blow to the free and open internet by repealing net neutrality rules. Because of Chairman Pai and the other Republican commissioners, there are no longer any rules in place to stop internet service providers from changing the internet as we know it. They are now free to block apps, slow websites, or even limit access to certain kinds of content. The best way to move forward is to turn our tweets and our comments into action."

Senator Patrick Leahy shared similar sentiments saying in a statement, "Today the FCC took a wrecking ball to the pillars of freedom and openness upon which the internet was built...This has been a rushed, cynical and slipshod process that has been fundamentally flawed...As a staunch supporter of net neutrality rules, I will keep fighting until these protections are restored."

Representative Mike Doyle also vowed to introduce legislation that would overturn today's FCC order in a more permanent manner. "I've tried repeatedly to convince Chairman Pai to abandon his plans to dismantle the Open Internet Order – most recently by organizing a letter from 118 Members of Congress urging him not to take this vote today – and now that the FCC has voted to kill net neutrality and give ISPs a green light to control access to the internet, I will introduce legislation under the Congressional Review Act to overturn today's order and restore net neutrality," he said in a statement.

"Ending net neutrality undermines the free and open Internet. Today's FCC decision is yet another example of how Republicans are padding the pockets of big corporations at the expense of consumers and small businesses," Representative Betty McCollum said in a statement. "Congress should now overturn this new rule, preserve net neutrality, and save the internet. I am proud to co-sponsor Representative Doyle's legislation to do just that."

Representative Jerry McNerney said, "Today's decision by the Commission sets us on a dangerous path backwards. Net neutrality protections are essential for ensuring that the internet serves as a forum for the free flow of information and a gateway for economic opportunity. I'm proud to join Congressman Doyle to push to reverse this drastic action."

Senator Bernie Sanders said in a tweet that the decision was "an egregious attack on our democracy" and "we must do everything we can to stop this decision from taking effect."

This is an egregious attack on our democracy. The end of #NetNeutrality protections means that the internet will be for sale to the highest bidder. When our democratic institutions are already in peril, we must do everything we can to stop this decision from taking effect. https://t.co/8GGrJFMdrU

Twitter also said it would keep fighting for net neutrality and said the FCC's decision was a threat to innovation and free expression.

The @FCC's vote to gut #NetNeutrality rules is a body blow to innovation and free expression. We will continue our fight to defend the open Internet and reverse this misguided decision. https://t.co/TXTQWDiBNC

And Brian Chesky, cofounder and CEO of Airbnb, said in a tweet, "The FCC's vote to repeal net neutrality is wrong & disappointing. A free & open internet is critical to innovation, an open society, & widespread access to economic empowerment. @Airbnb will continue to speak out for net neutrality."

For those wondering what the vote means and what happens next, you can check out our discussion of that here.

In this article: aclu, congress, ElectronicFrontierFoundation, FCC, gear, google, internet, netflix, NetNeutrality, twitter
All products recommended by Engadget are selected by our editorial team, independent of our parent company. Some of our stories include affiliate links. If you buy something through one of these links, we may earn an affiliate commission.