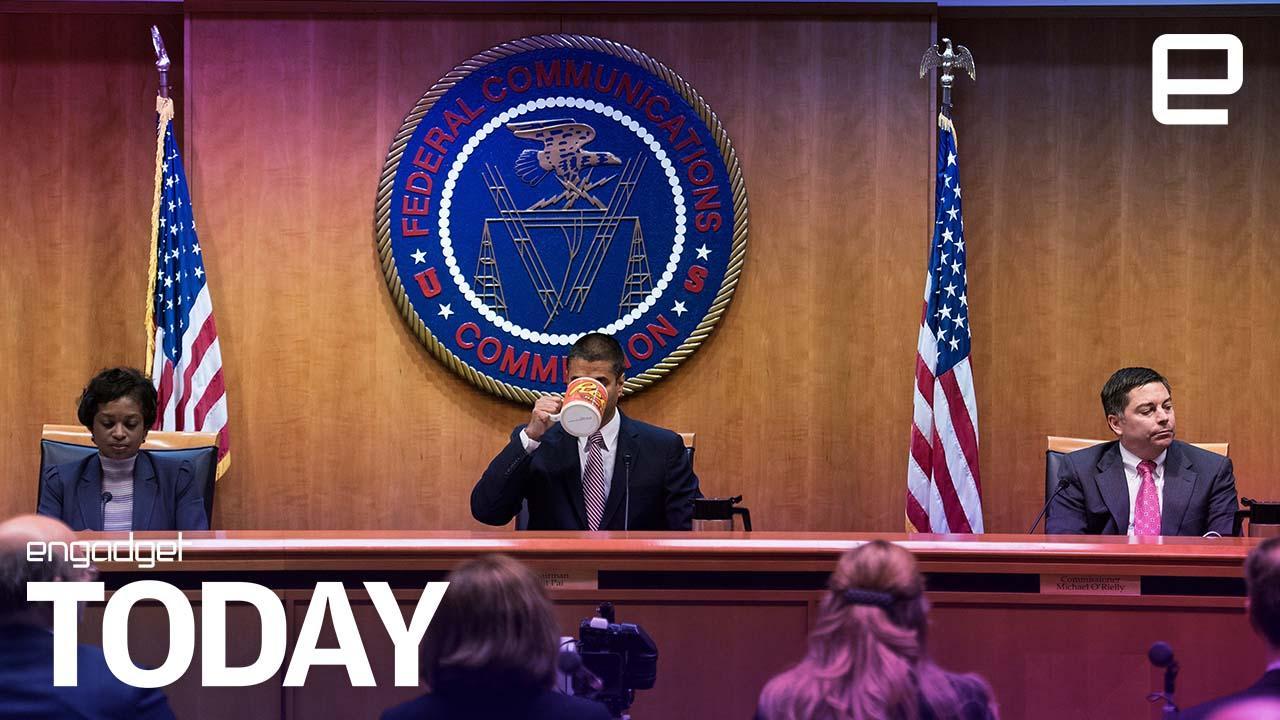 During today's open meeting, the FCC's proposal to repeal net neutrality protections put in place in 2015 was put to a vote and it passed, three votes to two. As was widely expected, the three Republican members -- Chairman Ajit Pai and Commissioners Michael O'Rielly and Brendan Carr -- voted in favor of the proposal while Commissioners Mignon Clyburn and Jessica Rosenworcel, both Democrats, voted against it.

Under the new order, broadband internet will no longer be classified as a Title II service and the added regulations that go along with that classification will be removed. Internet service providers will be free to practice blocking, throttling and paid prioritization as long as they disclose those practices as per a new transparency requirement. You can read more about Title I vs. Title II classifications here.

Additionally, the FCC and FTC will now share jurisdiction over internet service providers and will work together to enforce transparency requirements and to investigate practices deemed anticompetitive, deceptive or unlawful. Further, states will not be able to override the stipulations of the new order with their own legislation. Any state laws that contradict the FCC's newly enacted plan will be considered moot.

A number of groups have spoken out against the proposal and many sent letters to the FCC over the last couple of weeks asking it to delay or abandon the vote. Yesterday, Politico reported that FCC Chief Technology Officer Eric Burger raised concern just yesterday over some of the language included in the proposal. In an email to each of the FCC commissioners' offices, he said that service providers' ability to block or throttle specific websites is a concern. "Unfortunately, I realize we do not address that at all," he wrote. "If the ISP is transparent about blocking legal content, there is nothing the [Federal Trade Commission] can do about it unless the FTC determines it was done for anti-competitive reasons. Allowing such blocking is not in the public interest." A source told Politico that those concerns were addressed with added language, though that new addition to the proposal wasn't released for review prior to today's vote.

Following reports released yesterday that as many as 2 million identities might have been stolen to leave fake comments on the FCC's proposal during the public comment period, Commissioner Rosenworcel said in a statement, "This is crazy. Two million people have had their identities stolen in an effort to corrupt our public record. Nineteen State Attorneys General from across the country have asked us to delay this vote so they can investigate. And yet, in less than 24 hours we are scheduled to vote on wiping out our net neutrality protections. We should not vote on any item that is based on this corrupt record. I call on my colleagues to delay this vote so we can get to the bottom of this mess."

Commissioner Clyburn opened her response to the proposal by saying, "I dissent. I dissent from this fiercely-spun, legally-lightweight, consumer-harming, corporate-enabling Destroying Internet Freedom Order." And she concluded by quoting Chairman Ajit Pai himself. She said, "As I close my eulogy of our 2015 net neutrality rules, carefully crafted rules that struck an appropriate balance in providing consumer protections and enabling opportunities and investment, I take ironic comfort in the words of then Commissioner Pai from 2015, because I believe this will ring true about this Destroying Internet Freedom Order, 'I am optimistic, that we will look back on today's vote as an aberration, a temporary deviation from the bipartisan path, that has served us so well. I don't know whether this plan will be vacated by a court, reversed by Congress, or overturned by a future Commission. But I do believe that its days are numbered.' Amen to that, Mr. Chairman. Amen to that."

In this article: ajitpai, aoloriginals, brendancarr, dailyshow, Engadget, EngadgetToday, engadgetvideo, entertainment, FCC, ftc, gear, internet, jessicarosenworcel, michaelorielly, MignonClyburn, NetNeutrality, politics, titleii, Vote
All products recommended by Engadget are selected by our editorial team, independent of our parent company. Some of our stories include affiliate links. If you buy something through one of these links, we may earn an affiliate commission.