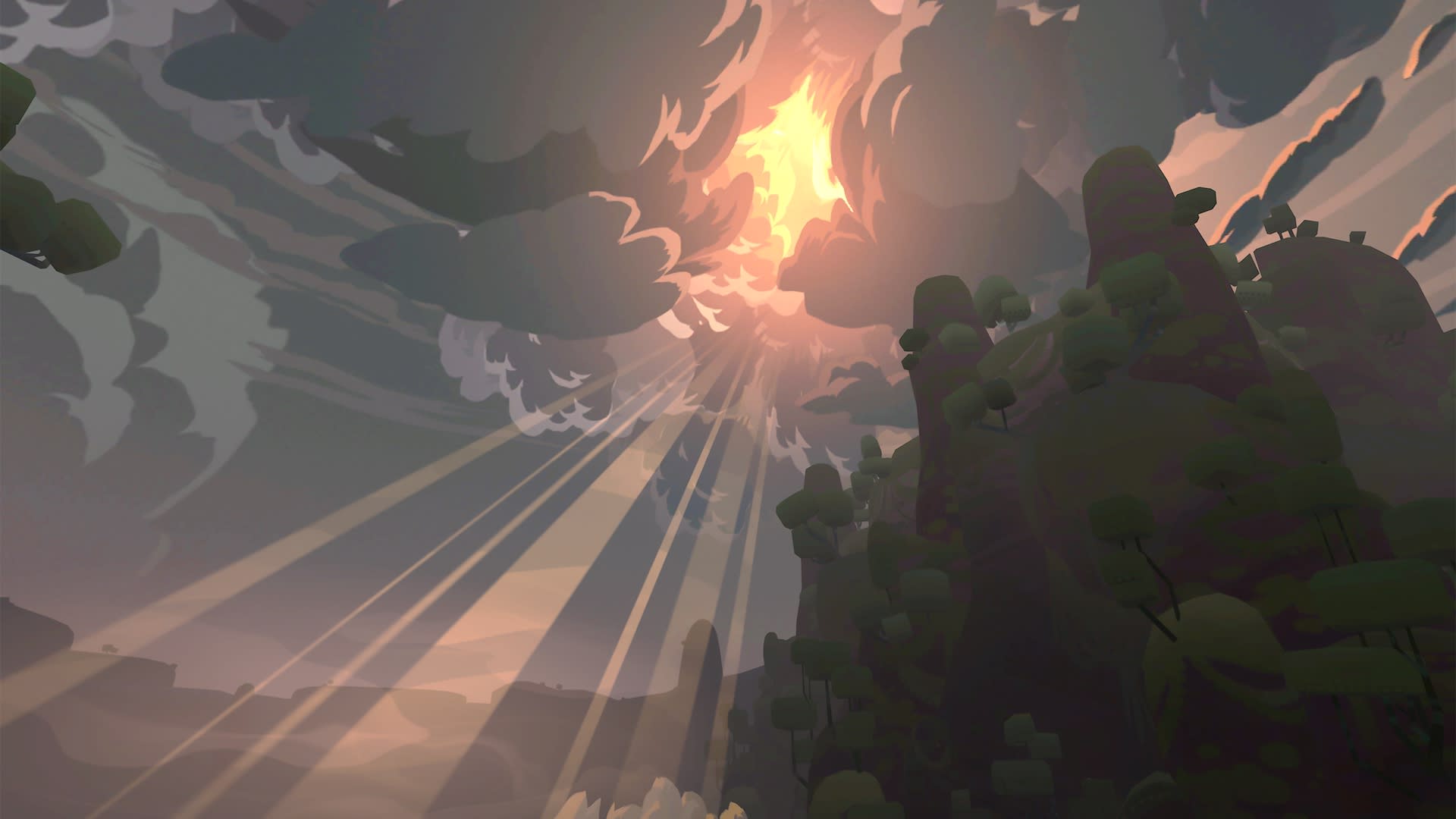 "Chaotic." That's how Turtle Rock Studios president Steve Goldstein described the 14 months between its last AAA game, Evolve, being effectively killed and now. The four-hunter-versus-one-gigantic-monster online multiplayer game struggled to retain players after it was released for PC, PlayStation 4 and Xbox One in early 2015.

Last June, Evolve transitioned from a $60 game to a free-to-play one. As a result, it went from roughly 100 players per month to more than 15,000. You'd think that would have been enough to keep the lights on, but you'd be wrong. Four months later, publisher 2K Games pulled the plug, saying that while the servers would remain online for the foreseeable future, the game wouldn't be getting any more updates.

"It was absolutely looking bleak, but sadly that's not unusual in our space," Goldstein said. "Everyone who works here knows that they are taking a risk, right? That's not a problem unique to us."

If all you've paid attention to are headlines on gaming and tech news sites, you'd think that Turtle Rock has been on the ropes ever since. But in the last year or so, thanks to Oculus' aggressive investments in virtual reality games and other experiences, Turtle Rock has been quietly building a mobile VR safety net in case its next $100 million project goes the way of Evolve.

"We knew we needed to do something besides being a one-game studio," Goldstein said. The team had developed a relationship with Oculus' current VP of content Jason Rubin while he was at THQ, the now-defunct original publisher for Evolve.

After chatting with Rubin at his new Facebook-sponsored digs and finding out what Oculus was looking for, Turtle Rock put together Other Worlds, a quiet, meditative experience that places you inside a trio of gorgeous 360-degree panoramas. It's not really a game in the traditional sense -- you're stuck in place, for one -- but it gave Oculus enough confidence in the studio to let it keep experimenting.

Turtle Rock's next project, 2016's Face Your Fears, was a little more traditional. It's a free-to-play jump-scare game that puts you in situations like a prop plane whose engine started sputtering or a child's bedroom where malevolent clown dolls fall off bookshelves and closet doors open and slam shut. So far it's racked up 1.6 million downloads -- almost double the number of players Evolve had at its free-to-play peak. That isn't lost on the team.

Studio co-founder and design director Chris Ashton said that there was pressure to succeed with VR given the Left 4 Dead creator's AAA lineage. "We're always proud of the product we deliver, so the expectation was that we would basically go into VR and we would kick ass," he said.

Which brings us to the team's latest project, The Well. Throughout our conversation, the team kept referring to The Well as its "first" VR game despite its prior work in the space, and the team hopes it's a lot of players' first role-playing game in general. You pick a character archetype, and then a baphomet-like god (above) sends you on a quest to defeat a demon hell-bent on destroying the painterly world of Tholl. Along the way, you level up, meet and recruit new party members and take part in countless random turn-based battles. It might sound simplistic, but this is a brand-new medium for the studio on a nascent platform where "Turtle Rock" doesn't mean much, if anything.

The team spent a bulk of its development time on The Well solving basic problems that haven't been an issue in decades. Specifically, moving around an environment in first person. Get it wrong in VR and you could make the player sick. When I played the game this week with turning and movement speed set to "high" I felt nauseous, but bumping it down a notch to "medium" made for a much more enjoyable time.

"There's a lot more ways to make someone super nauseated in VR than there are to make it a comfortable, fun experience," said Chloe Skew, a producer on The Well.

The game came out in October, but so far hasn't attracted an audience to the degree Face Your Fears has. Exact download numbers weren't available at press time, but in two months, the game only has 44 reviews on the mobile marketplace; Face Your Fears has almost 29,000. We're a triple-A studio, we're always proud of the product we deliver, so the expectation was we'd go into VR and we would kick ass.

There's a big difference between the two, though: The latter is free, whereas The Well costs $5. Goldstein chalks that up to the fact that the GearVR platform as a whole caters toward casual consumers who don't spend money on games and likely got their headset as part of a promo. For him, releasing The Well on GearVR was an experiment.

"We wanted to see how much of our audience that we currently have would would potentially convert" to paying for a game, Goldstein said. One tactic for that is advertising The Well within Face Your Fears to see if that will give it a sales bump. Goldstein is counting on the all-in-one Oculus Go to be the "full-blown launch" of The Well and where the game finds its player-base. He said that at that point, people will have paid $200 for the headset so they'll be primed to buy games for it, increasing the likelihood that they'll spend more than just a few minutes in VR.

The game's current sales don't mean that the team is moving on and going back to the cheap thrills a free jump-scare game provides. They also don't mean Turtle Rock is going to abandon VR and return to making games for platforms like PC and consoles where the studio's reputation alone is enough to attract players. Beyond re-learning game design fundamentals like player locomotion, VR allows Turtle Rock to rebuild its reputation from scratch too.

Goldstein spoke of a 50-something Swedish woman who loves filming herself getting frightened by playing Face Your Fears; she then uploads the footage to YouTube. "I can guarantee you she's never heard of Evolve or Left 4 Dead," he said. "She's awesome." But isn't that frustrating? Spending 15 years building a name as a studio only to have to start from scratch with a new audience?

"I think it's liberating, actually," said art director Justin Cherry. There are a few reasons for that. For one, it gives the studio a chance to make its name mean something for an entirely new audience that otherwise wouldn't have heard of it. It makes sense from a business perspective too. If the studio's pitching a first-person shooter to a typical publisher, almost everyone is going to take a meeting with the Left 4 Dead team. But if it's pitching an RPG like The Well that might not be the case.

The Well uses the GearVR controller for interacting with the world.

"Let's say one of these other titles that we're working on that is in a genre we've never done before moves a million units or two million units," Goldstein proposed. "This is a huge opportunity for us to expand our business."

Goldstein said that had it not found early success with its Oculus work it probably wouldn't have kept at it. After all, despite Facebook's absurdly deep pockets, it isn't going to repeatedly invest in failure. He said that Turtle Rock's smaller-scale VR games weren't initially a way to subsidize the risk of making $100 million AAA games, even though that's kind of what's happened as a matter of course.

In the meantime, there are still months before the Go's ambiguous "early 2018" release window, and Turtle Rock still has work to do. Currently, the studio has an unannounced AAA game in the pipeline, in addition to a pair of VR projects. "Could the Go be a dud? I have no idea," Cherry said. "What I do know is when Mark Zuckerberg says he wants a billion people in VR, he's going to find way to get there, so if it's not the Go, it's gonna be something."