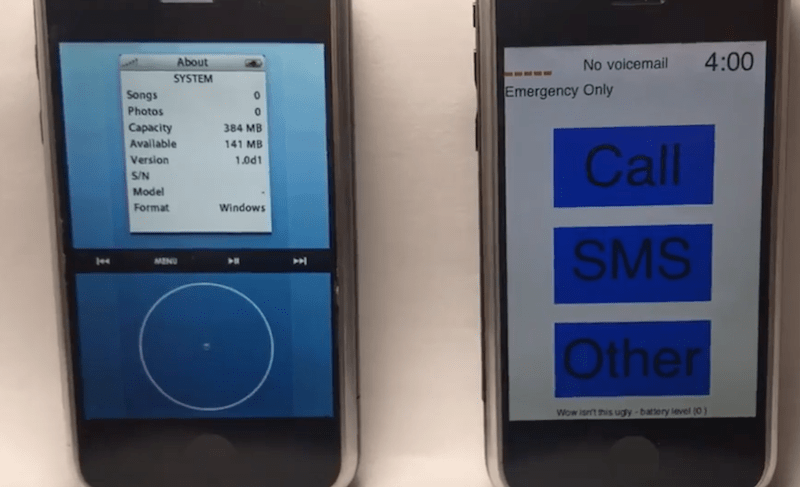 Apple's decision to give the iPhone a touchscreen was a bold and controversial one at the time. In an era where Blackberry was thriving with its keyboard phones, the idea of removing them entirely seemed baffling. History shows that Apple made the right decision with a full-screen touchscreen, but that wasn't the only option. We've heard of the iPod-esque touch wheel prototype iPhone before now, but a new video from tech leaker Sonny Dickson now shows this interface going toe-to-toe with an icon and (touch-controlled) iteration.

Created by Tony Fadell, the man behind the iPod, this click wheel prototype (P1) used an onscreen wheel to navigate a UI that looked almost identical to the iPod's. Going up against Fadell's more familiar take was Scott Forstall's touchscreen based prototype (P2). While the video appears to show P2 running on something that looks closer to the iOS we know today, both phones actually operated on an early touch operating system known as Acorn OS.

As you can see, the scroll-wheel P1 model loads faster thanks to running a slimmed down version of the OS, booting to an iPod Classic Logo. Meanwhile, the touchscreen prototype takes a little longer to boot, initially displaying the image of an octopus. This slower start time is a result of the more developed OS that P2 was running on.

Ten years on, this footage serves as an intriguing insight into the choices Apple engineers faced as they attempted to create one of the most iconic tech products ever. Interestingly, this process of pitting 'p devices' (or incredibly basic prototypes) against each other is still the first step of getting a new product approved at Apple, according to Dickson.

Luckily for us, the process had the right outcome, with Apple mercifully saving the world from years of typing out texts with a scroll wheel.

Via: Mac Rumours
Source: Sonny Dickson
In this article: apple, gear, iphone, ipod, mobile, prototype
All products recommended by Engadget are selected by our editorial team, independent of our parent company. Some of our stories include affiliate links. If you buy something through one of these links, we may earn an affiliate commission.