Ever since my teenage years, I've been fascinated by the story of how a clogged-up Hoover led Sir James Dyson on a five-year journey in which he built 5,127 prototypes and almost went bankrupt before finally coming up with the world's first bagless vacuum cleaner. The inventor's namesake company would go on to create a wide range of vacuums, bladeless fans, hand dryers, laundry machines and, most recently, a hair dryer. Perhaps to the surprise of some, these were all conceived in the quiet English countryside where Dyson is based. As of this writing Dyson employs around 7,000 people worldwide, 3,000 of whom are based on the UK campus in the ancient town of Malmesbury, whereas Singapore's R&D campus and Malaysia's testing facility each house about 1,300 workers. But it's the 14-acre UK campus where Dyson's New Product Innovation team gets to throw around wild ideas.

On average, it takes between three and five years for a new machine to evolve from mere sketches in the engineers' hardback notebooks into actual products. Obviously, the more ambitious projects will require even more patience. The Dyson 360 Eye vacuum robot, for instance, took 16 years. Dyson even tried to make its own Google Glass-like AR headset 12 years ago, but it was eventually canned after three years of development.

Dyson spends a little more than $6 million per week on research and development alone -- enough resources, presumably, for the engineers to focus on what they do best. To facilitate their work, the sites are equipped with high-end machining robots and 3D printers for rapid prototyping, special rigs for all sorts of exhaustive stress tests (dropping, twisting, slapping, bumping and more), labs dedicated to environmental-control testing and chambers for testing noise output and electromagnetic compatibility. In fact, electromagnetic compatibility has become more critical as Dyson delves into the world of connected appliances, the latest being its Pure Hot+Cool Link air-purifying heater.

Occasionally, Dyson has to set up specialized labs in order to dip its toes into new product categories. In the case of the Supersonic hair dryer, Dyson had to repurpose some labs just for testing 600 versions of prototypes using 1,600 kilometers (yes, kilometers) of real human hair, valued at $56,000. During the four years it took to develop the Supersonic, the engineers went from simple rigs that slowly moved strands of hair back and forth to human dummies that continuously combed their hands through their hair. After a certain number of cycles, the hair sample would then be examined for potential damage under a microscope or dangled in special boxes to observe any changes in shininess. Real human testers were eventually used too, of course.

To cater to the ever-growing Research, Development and Design (RDD) team, Dyson recently opened a building on its UK campus where 450 lucky engineers can take advantage of its new labs and test chambers. Alas, the building, dubbed "D9," was out of bounds for me and even some of the staffers who accompanied me the day of my visit. In fact, this building is so secretive that it uses mirrored walls to blend into the surrounding greenery, only to be occasionally outed by the reflection of people or animals passing by.

I did get rare access to other parts of the campus, under the condition that I keep my camera in my pocket. As we walked into the RDD building, I was instantly overwhelmed by the vast, bright space inside the first workshop, even though it was only two stories high. The main corridor was lined with display boards, each of which held one model of a Dyson vacuum stripped down to the component level, so that the engineers could easily pick up parts for a quick reference. My host was also keen to point out the subtle remains of a production line, which was relocated to Malaysia in 2003. 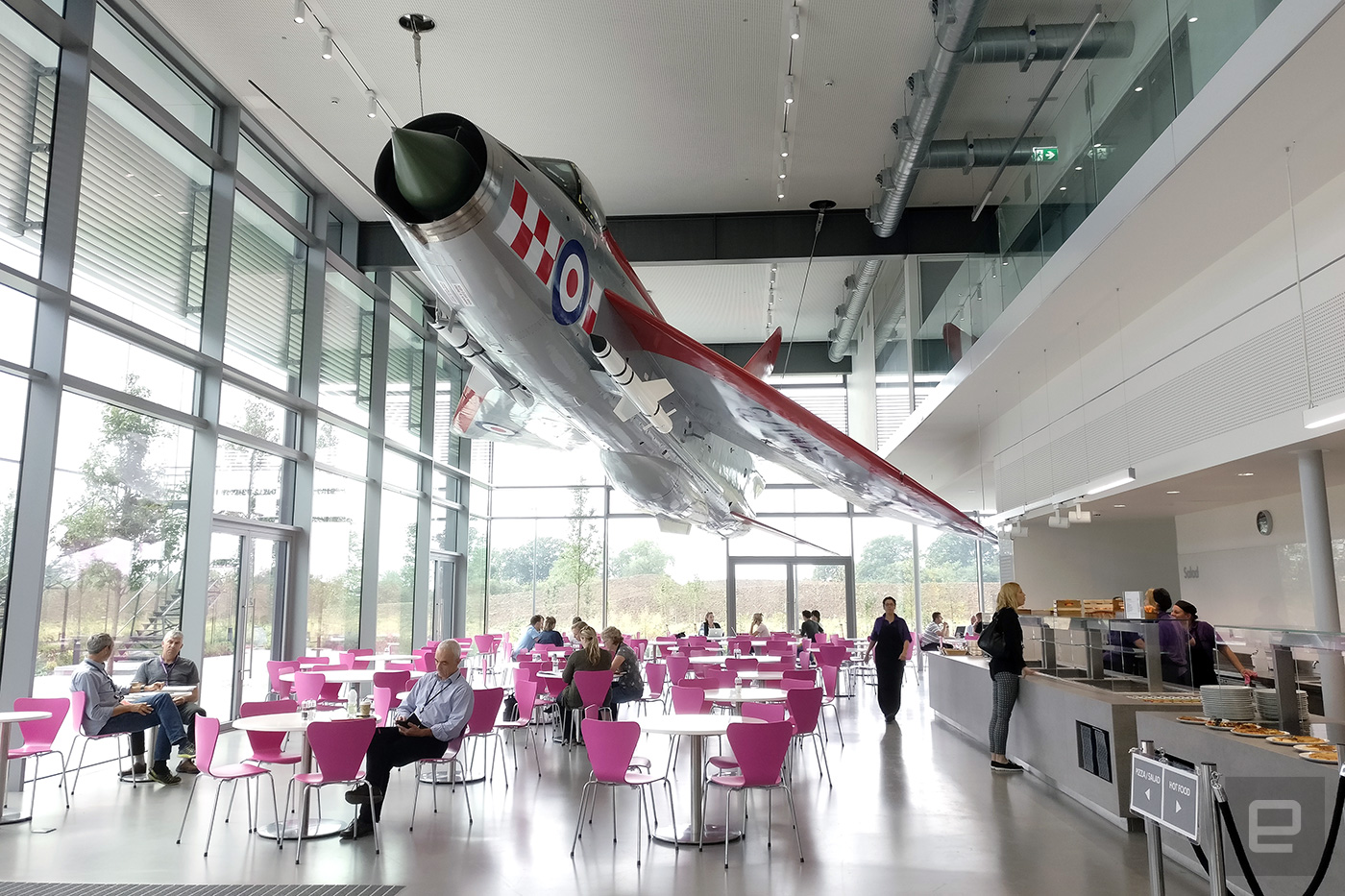 Dyson has a thing for engineering-related relics, so much so that the UK campus has a collection of what Sir James considers to be design and engineering icons. The most stunning piece is perhaps the Lightning jet fighter hanging on the ceiling of the campus' Lightning Cafe. Sir James' other jet, a Harrier, sits near a Bell 47 helicopter and a Rotork Sea Truck -- a high-speed landing craft that he helped design when he was 23 -- in the car park. Walk toward reception and you'll find an original Mini Cooper that's been cut in half -- a sixtieth birthday present to Sir James from his engineers.

On the other side of the RDD building, I was amused by the sight of a large, retro-looking engine parked on a dolly in the middle of the room. Turns out it was a Rolls-Royce Welland, which was Britain's first production turbojet engine made for the Gloster Meteor jet fighter in the Second World War. This particular 74-year-old unit is the world's last remaining working original.

"Sometimes we just fire it up on the lawn on a sunny afternoon," Global Product Development Director Paul Dawson said. Much to the delight of Dyson engineers on-site back in April 2015, Sir James invited Ian Whittle, son of the engine's inventor, Sir Frank Whittle, to stand around the roaring Welland in the campus car park. If all goes well, the campus will soon see the addition of a relatively more modern Concorde engine to keep the Welland company. 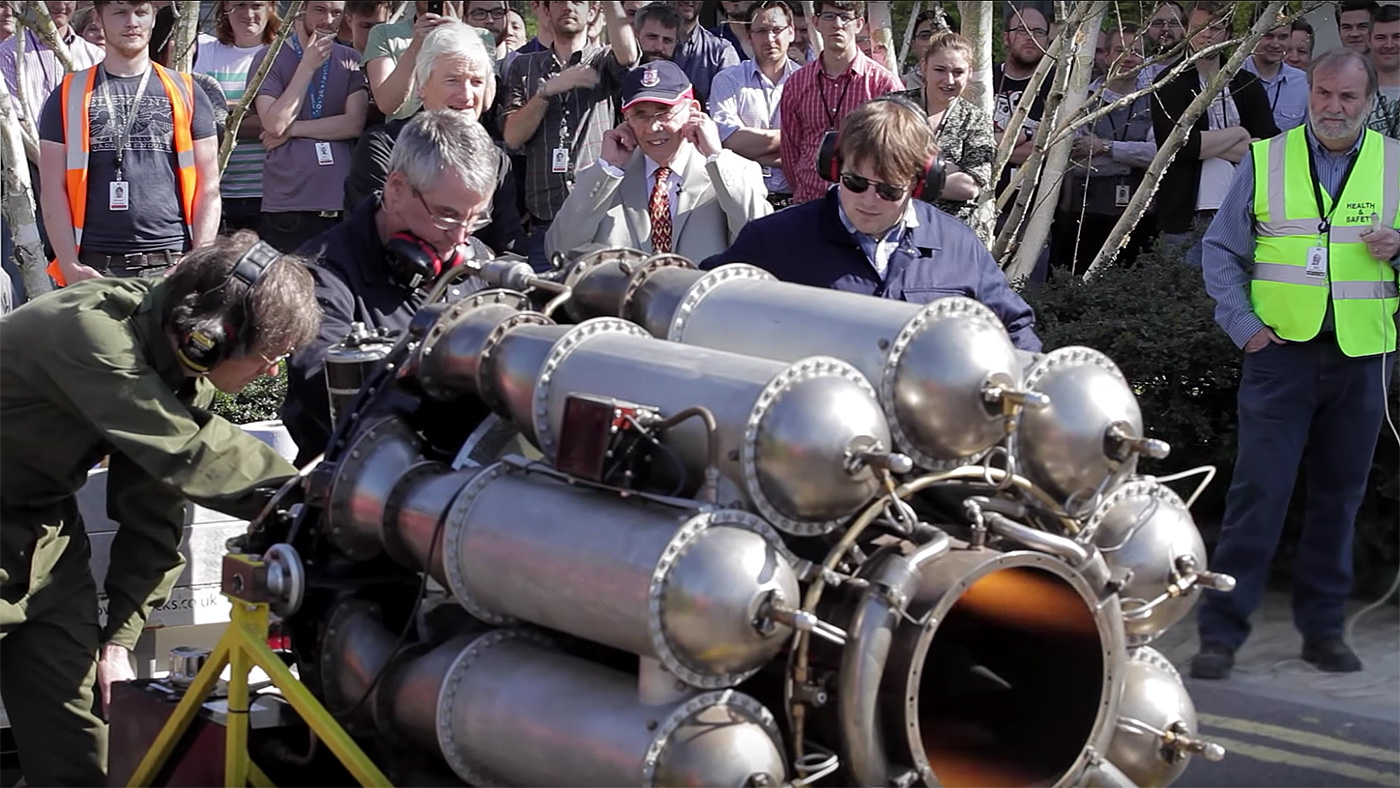 Dyson's obsession with high-performance engines should come as no surprise. Much like what the engine is to an aircraft, the motor is the heart of all Dyson machines. In order to get the best cyclonic separation performance, the company went from using clunky conventional motors to making its own nimble digital motors, and these spin two to three times faster than the ones inside bag-type vacuums.

"That opened up massive opportunities," Global Head of Motors & Power Systems Matthew Childe said. "It opened up doors on size, on power density, on weight and actually got us to a place where the competition now is trying to catch up."

Thirteen years after Dyson's first digital motor, the one used in the DC12 compact vacuum, the latest development from Childe's Motors Lab is the V9 -- the company's smallest-ever digital motor made exclusively for its Supersonic hairdryer. The precision requirements for its 13-blade aluminum impeller are so high that the device can only be machined by military-grade tools at Dyson's Singapore base in order to achieve the high flow rate and quieter acoustic performance while staying in one piece at 110,000 RPM.

Some of the earlier digital motors continue to power other types of Dyson products. The V8, for instance, is inside the latest Dyson cordless vacuums with a power rating of 425W -- more than double that of the V2 inside the DC31 handheld vacuum from 2009. The much larger V4, on the other hand, is still used for delivering high air pressure in Dyson's hand driers. 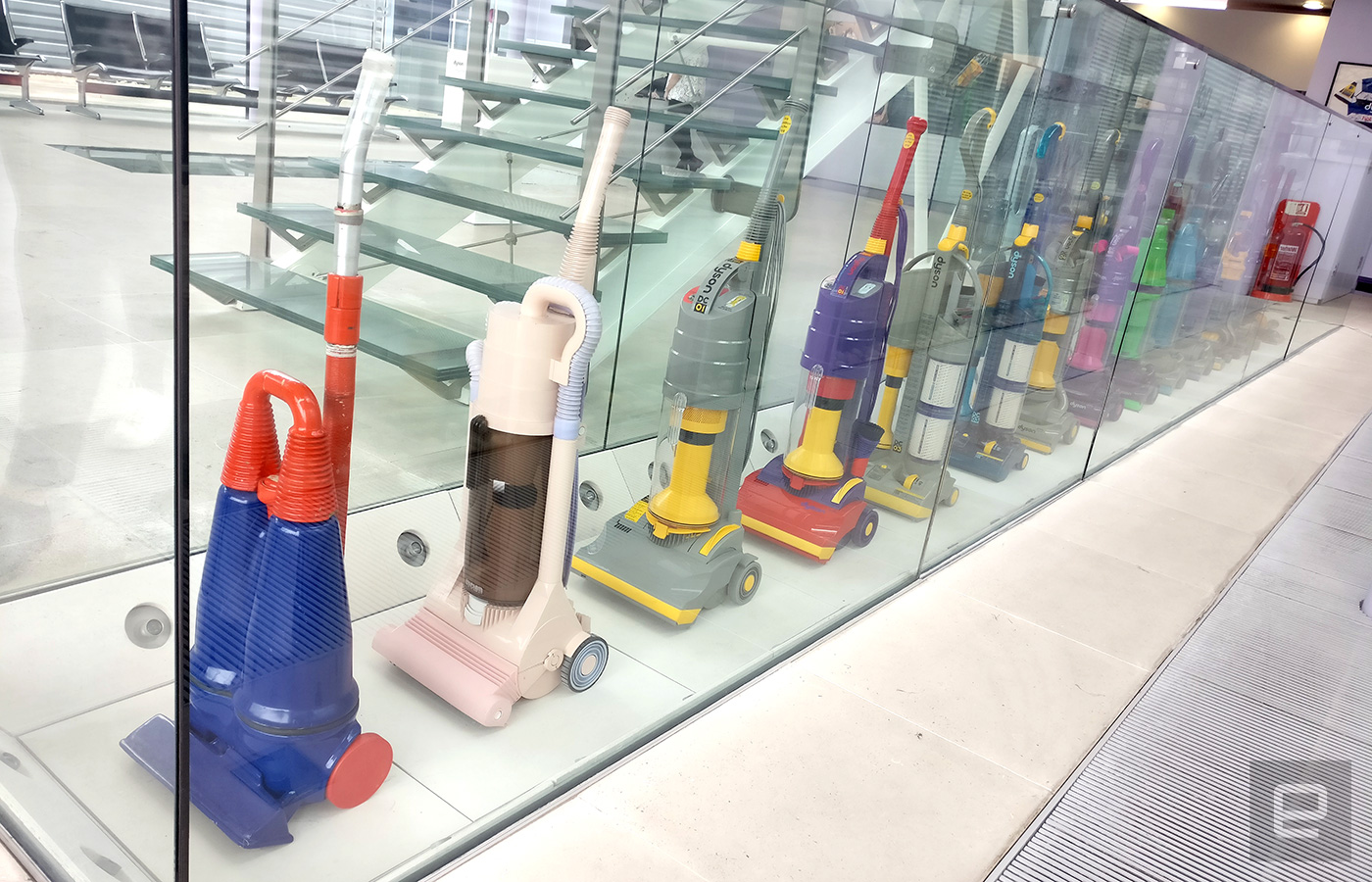 Dyson obviously isn't finished with motor development anytime soon, but we can also look forward to its other key interest: solid-state batteries. Back in Oct. 2015, the company announced its $90 million acquisition of Sakti3 for its high-density solid state battery technology, which could lead to some interesting breakthroughs in Dyson's handheld devices, robots and even its rumored electric car. Whatever it is that Dyson wants to build in the future, though, chances are it will never run short of engineers -- as long as it continues to operate in a bucolic setting with weird props aplenty, anyway.

In this article: airpurifier, bladelessfan, dyson, england, fan, gear, hairdryer, headquarters, home, hoover, interview, jamesdyson, malmesbury, motor, purehotpluscoollink, supersonic, tour, uk, uk-feature, vacuum, video
All products recommended by Engadget are selected by our editorial team, independent of our parent company. Some of our stories include affiliate links. If you buy something through one of these links, we may earn an affiliate commission.