Hyundai has been dragging its feet. Hybrid technology has been on the road for over a decade, and the Korean automaker is only now catching up, with its own dedicated Ioniq brand (a hybrid Sonata has been available for a while). But instead of just dropping a single car into the market and waiting to see what happens, the company decided to introduce three Ioniq green vehicles, a hybrid, a plug-in hybrid and an electric vehicle.

The automaker may have taken its time, but Hyundai says that over the past 11 years it's been researching and developing green vehicles that fit within its brand. The results are inexpensive cars that bring electric technology to car buyers who want cheap, reliable transportation. This strategy seems to have paid off. The hybrid starts at $22,200 while the pure electric car is $29,500. Both of those are before federal tax credits.

But before I talk about what it's like to cruise the countryside outside Santa Barbara, California, in these cars, there is a caveat: Hyundai has decided to focus on efficiency instead of range. The automaker hasn't lined the bottom of the entire passenger compartment of the EV with batteries like other companies. Instead a small 28kWh pack sits under the rear seats. The result is that the electric Ioniq only has a range of 124 miles. In a world where the 238-mile range Chevy Bolt exists, that's sure to turn off some buyers. But it's important to remember that the starting price of the Bolt is $37,500. The Ioniq EV is $8,000 cheaper. 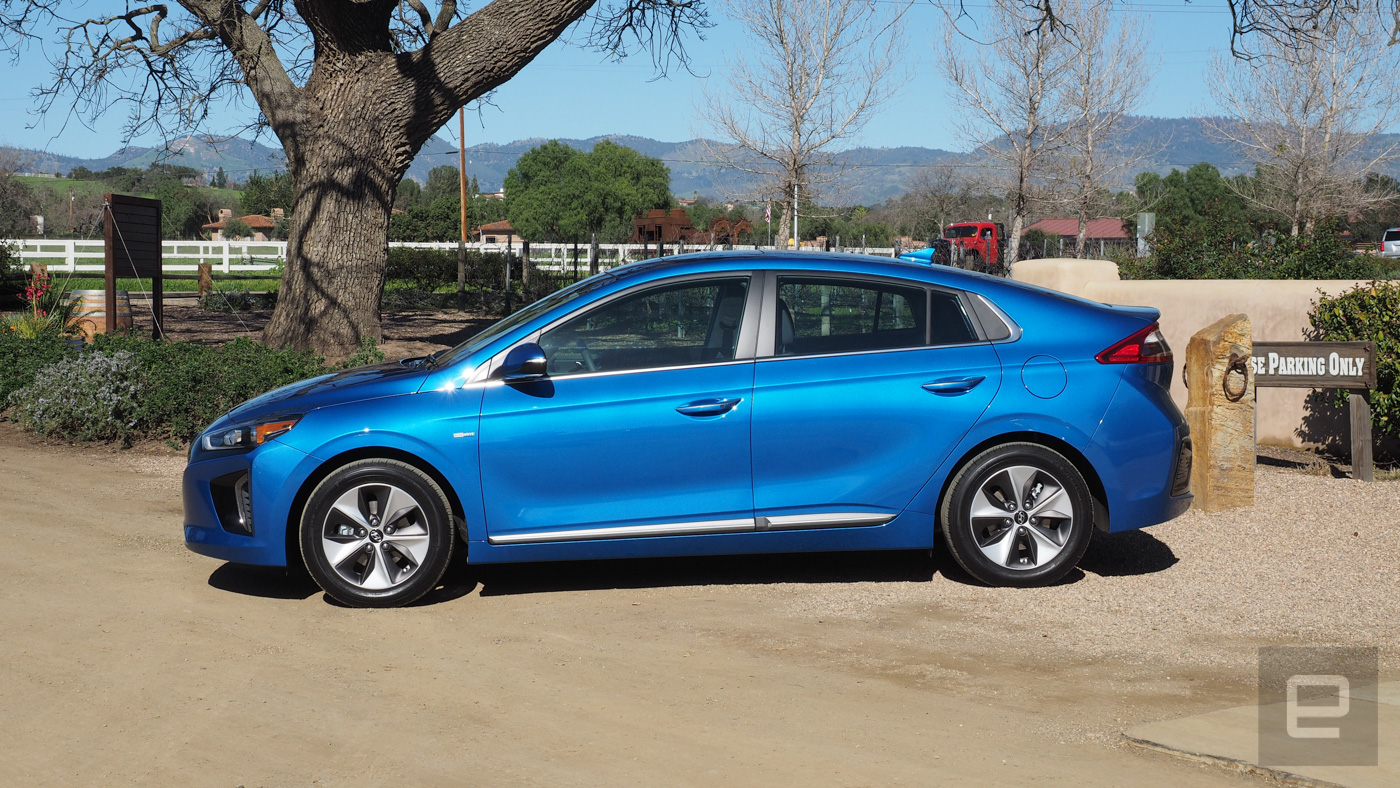 The three vehicles look nearly identical from the outside. But on the road, there's a difference between the hybrid line and electric Ioniq. Both vehicle types are solid commuters/small family cars. Yet they each excel in their own way.

For example, the hybrid has surprisingly impressive handling. It hugged the twisting mountain roads of the central California coast far better than expected. But linking those turns is where the car's paltry 139-horsepower reminds you you're behind a value brand. Even in sport mode, the hybrid's acceleration is laughable. The best part is that stomping on the gas from a dead stop creates all sorts of engine noise. But the speedometer is there to let you know it's a lot of racket for little payoff. 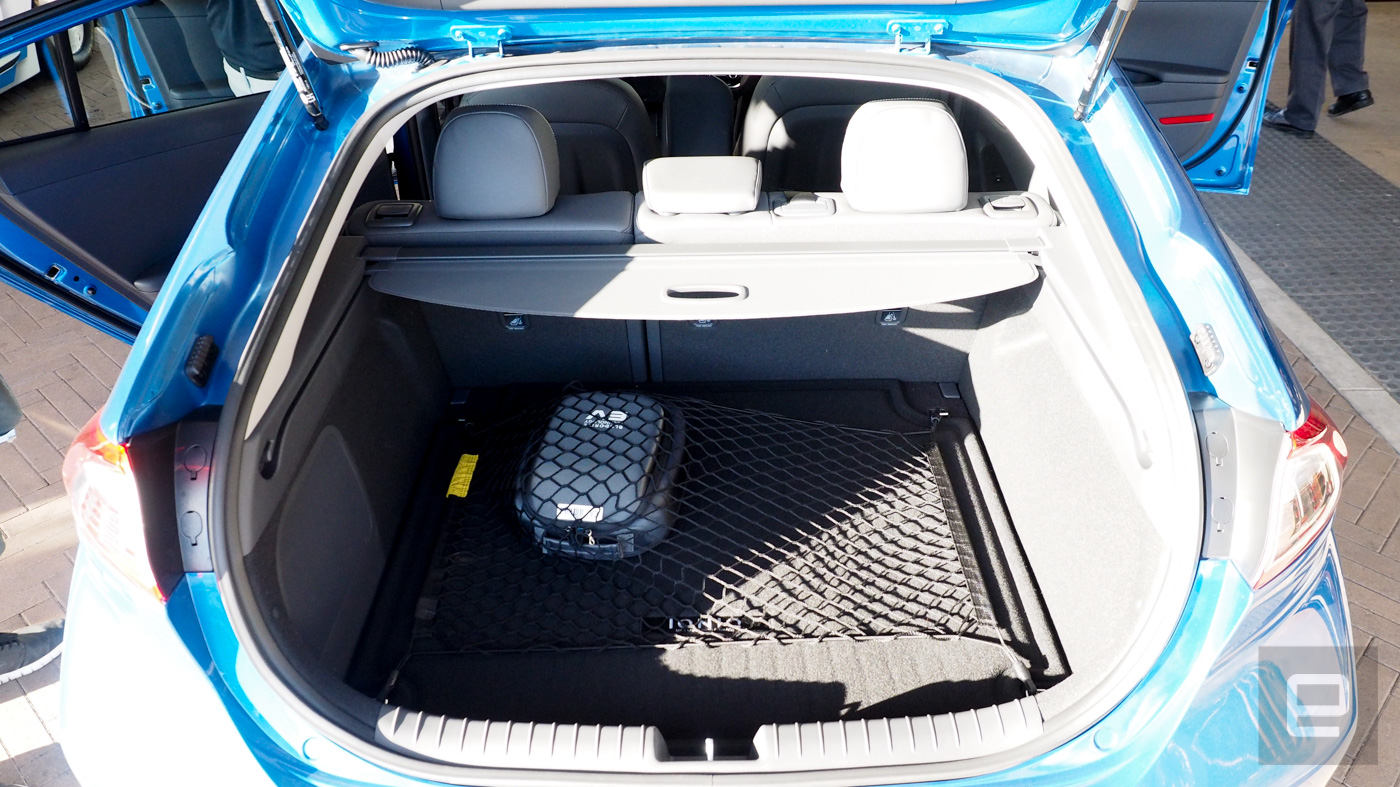 Most of the time, this isn't a big deal. But I did have to adjust how I entered the freeway, and overtaking other vehicles during uphill climbs was a struggle for the car. More often than not, I waited until the road leveled off.

Meanwhile the electric Ioniq felt slightly zippier than the hybrid, even though it only has 118 horsepower. EV engines will do that. But when navigating corners the car suffered from more understeer than the hybrid Ioniq I had driven earlier in the day. It was a surprise, considering that the cars look nearly the same.

But I probably wouldn't have been caught off guard by a pair of squealing front tires if the electric Ioniq felt the same as the hybrid. As soon as I sat in the car, it felt more refined. The center console and shifter are different from the hybrid. Acceleration was also smoother. Plus for drivers trying to eke every bit of energy out of their driving experience, the steering wheel has paddles to fine-tune the amount of regenerative braking. Hyundai didn't just rip out the internal combustion engine out of the car and call it an EV. It went further and created an overall better experience for that additional cost. 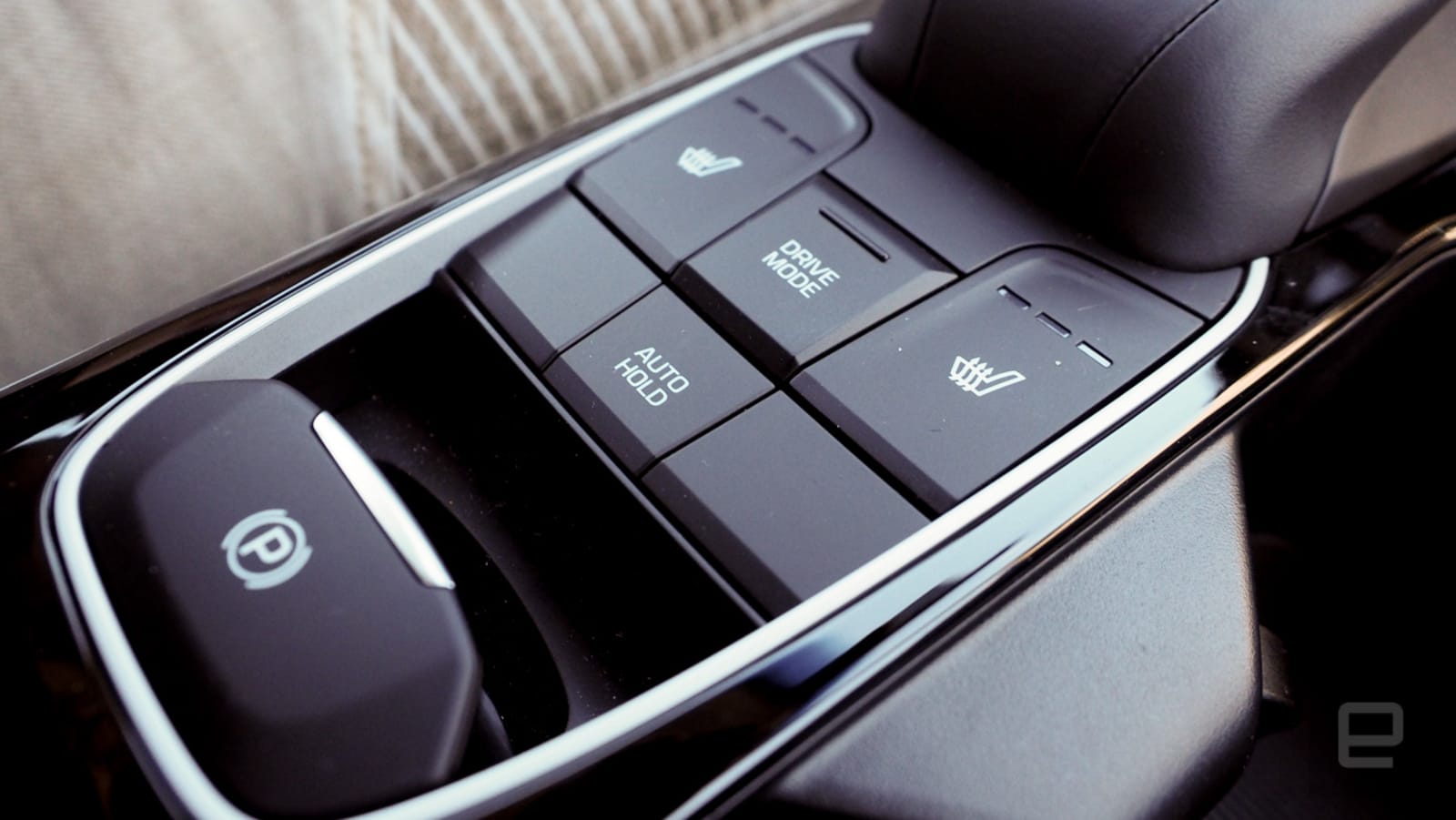 Still, regardless of which Ioniq you choose, it's hard to disregard the value Hyundai is offering here. Both cars boast as standard equipped a 7-inch touchscreen display, CarPlay- and Android Auto-ready infotainment system, keyless entry, Hyundai's Bluelink companion app, dual automatic temperature control, and my favorite feature in the car, the Driver Only climate control. When enabled, only the person behind the wheel gets to enjoy the AC or heater. The idea there is to help reduce the load on the vehicle and increase the car's efficiency when you're driving alone.

It's a little thing, but it's part of Hyundai's efficiency theme. The Ioniq EV gets an impressive 136 MPGe out of a 28kWh battery. In comparison, the Bolt gets 119 MPGe. So the Ioniq EV won't get you as far, but it will cost you less per mile. 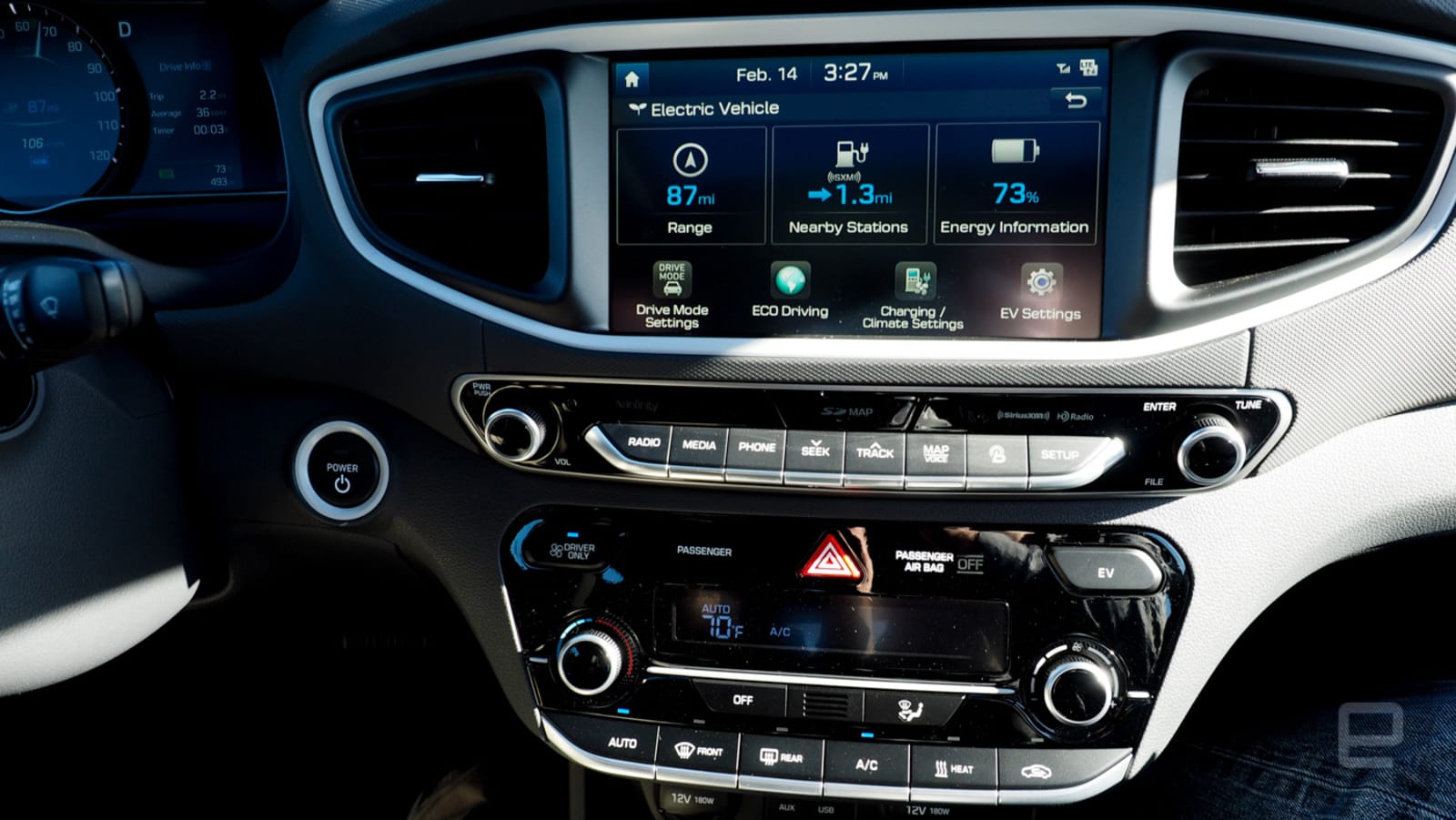 There is one final way Hyundai might save customers cash. It's announced a three-year subscription plan for the electric Ioniq that includes unlimited mileage, free scheduled maintenance and charge reimbursement. Unfortunately, the automaker has yet to announce what this will cost. But we should find out when the EV arrives in California showrooms in April. If you don't happen to live in the Golden State but still want the EV, you can order it from your local dealer as you would any other car. Just don't expect to see it at the local dealer.

The hybrid, meanwhile, is available now, with the plug-in hybrid coming in the fourth quarter of 2017. All three cars are entering an increasingly crowded market. But Hyundai is going for the entry-level market, and it might be able to eat into at least some of the Toyota Prius' share. 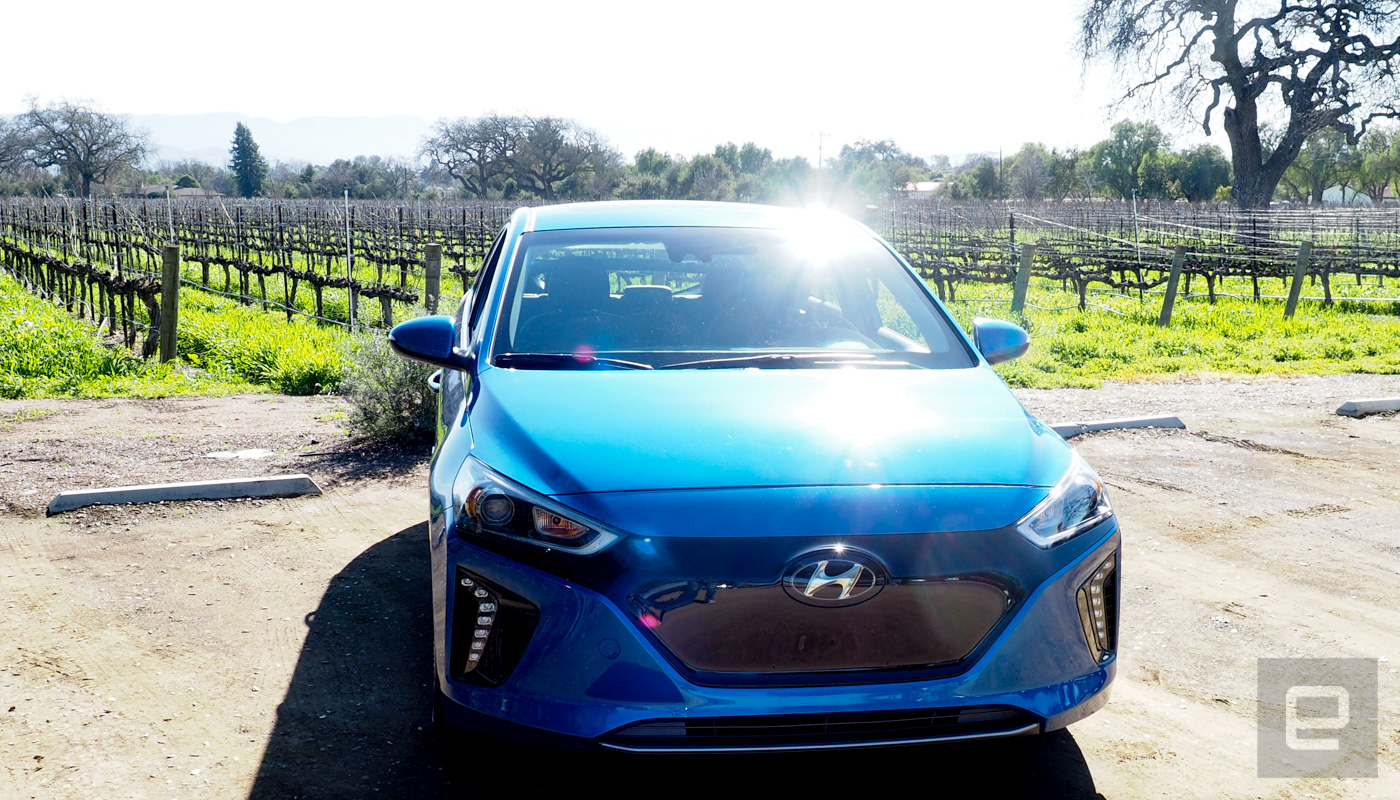 It might have taken Hyundai a while to get into the green-car market. But it's made sure that the vehicles it does drop are in line with the rest of its brand. For anyone looking at a low-cost hybrid or EV, the Ioniqs should be on your short list of cars to check out.

Source: Hyundai
In this article: electricvehicle, EV, gadgetry, gadgets, gear, green, hybrid, Hyundai, Ioniq, transportation
All products recommended by Engadget are selected by our editorial team, independent of our parent company. Some of our stories include affiliate links. If you buy something through one of these links, we may earn an affiliate commission.