Just over two years ago, California's 550-megawatt Topaz Solar Farm was the world's largest solar project. A year later, the 579-megawatt Solar Star farm, also in California, laid claim to the crown, and in 2016, India's 648-megawatt Kamuthi Solar Power Project was top photovoltaic dog. However, China is now the leader of this planet-friendly competition, by far, with the 850-megawatt Longyangxia Dam Solar Park. All told, it can power 200,000 homes at the peak of production.

I could tell you that it takes up 27 square kilometers (10 square miles) of land or that it's nearly as big as Macau, "the Las Vegas of Asia." But to really grasp the scale, check out the above image snapped by NASA's Earth Observatory on January 5th, 2017. It's about as long from top to bottom as the adjacent Longyangxia Reservoir is wide, a distance of about 13 miles. "The numbers are just crazy," a US solar executive told The Guardian in January. As shown in a 2013 image (below), that work was accomplished in just four years.

"The development of clean energy is very important if we are to keep the promises made in the Paris agreement," said Xie Xiaoping, chairman of the company behind the solar park. China is by far the leading nation in solar power, having produced 66.2 gigawatts of electricity last year. By comparison, the US produced 40 gigawatts of solar power in 2016. That's aided by the fact that China produces more solar panels for a lower cost than anywhere else. 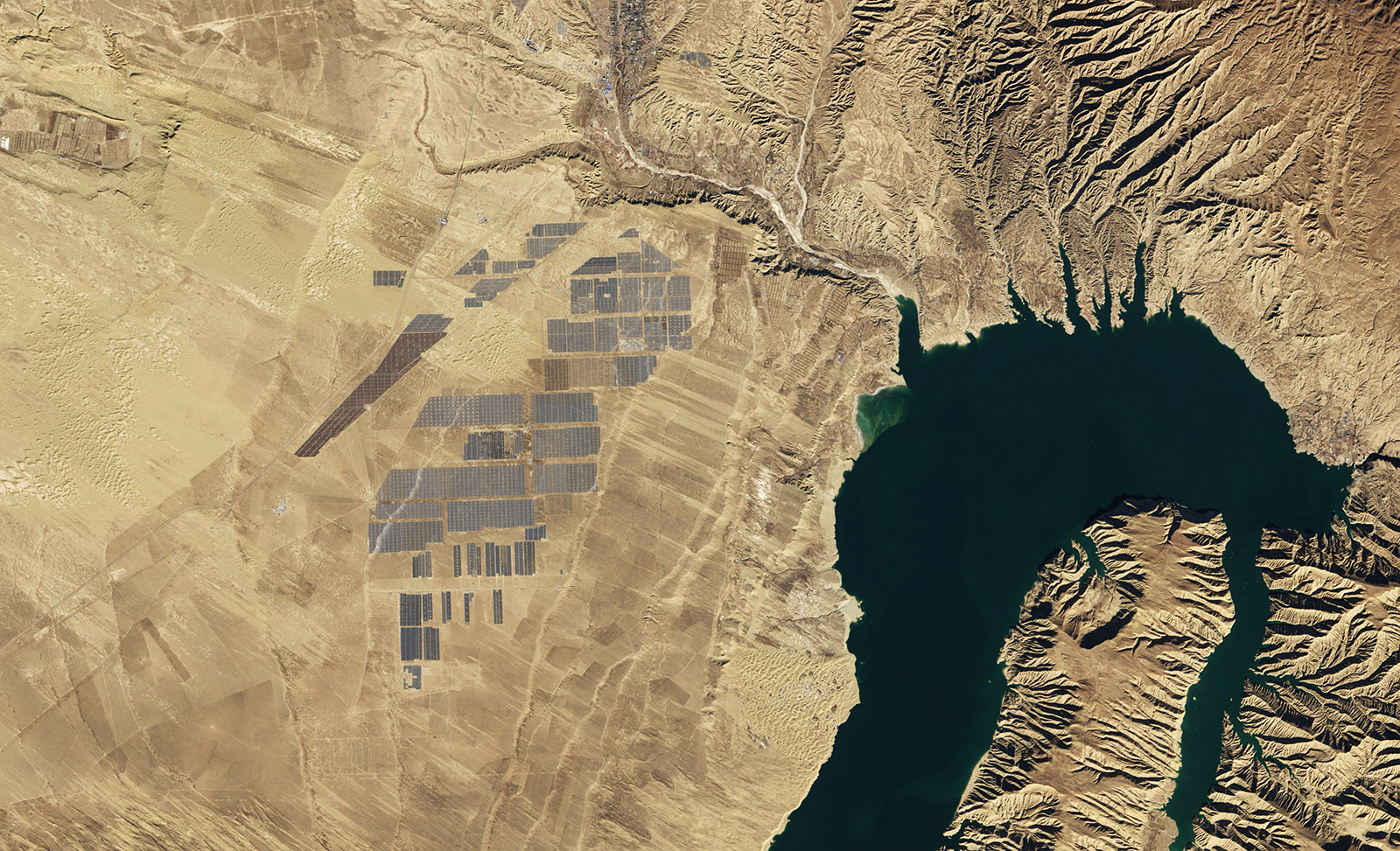 China's President Xi Jinping has promised an "unwavering" pursuit of clean energy, saying "our response to climate change bears on the future of our people and the well-being of mankind." By 2020, it hopes to be producing 110 gigawatts of power from solar and 210 gigawatts with wind, boosting non-fossil fuel production to 20 percent of its total power output by 2030.

110 gigawatts is actually a 27 percent reduction from an earlier target, according to Bloomberg. Part of the problem is that China has had trouble adapting the new projects into its power grid. With its over-reliance on coal and critical smog problems in Beijing and other cities, groups like Greenpeace have criticized the reduced targets, despite all the investment.

The Longyangxia Dam Solar Park won't hold the solar crown for long -- a 2-gigawatt project with six million panels in China's Ningxia region will come online in the next few years. All told, China plans to spend $360 billion on solar and wind energy by 2020, creating some 13 million jobs. In other words, its clean energy projects over the next three years would employ a third the population of Canada.

Source: NASA
In this article: 850megawatts, culture, green, LongyangxiaDamSolarPark, NASA, NASAEarthObservatory, science, SolarFarm, space, TheBigPicture, thenewbigpicture
All products recommended by Engadget are selected by our editorial team, independent of our parent company. Some of our stories include affiliate links. If you buy something through one of these links, we may earn an affiliate commission.