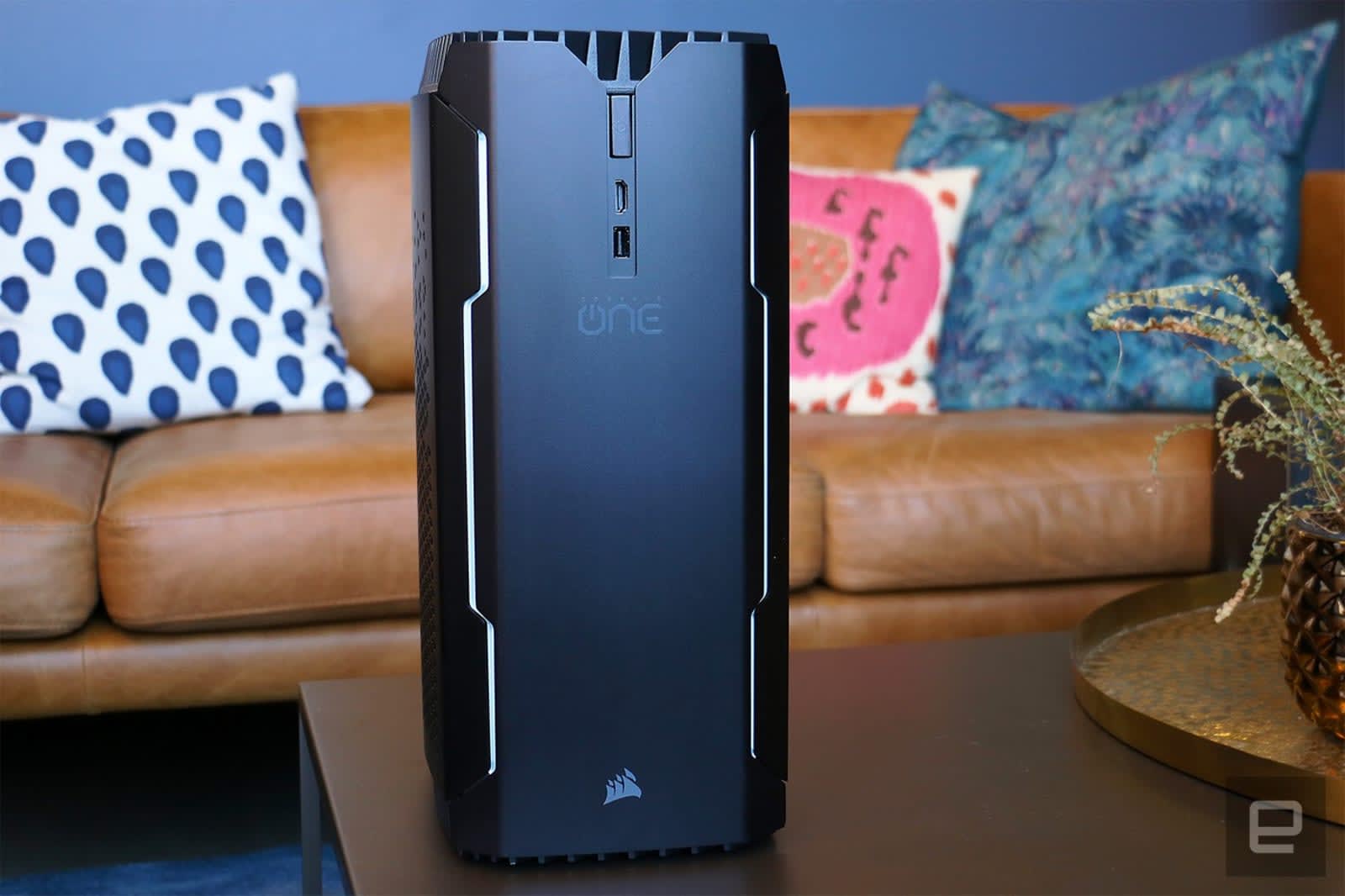 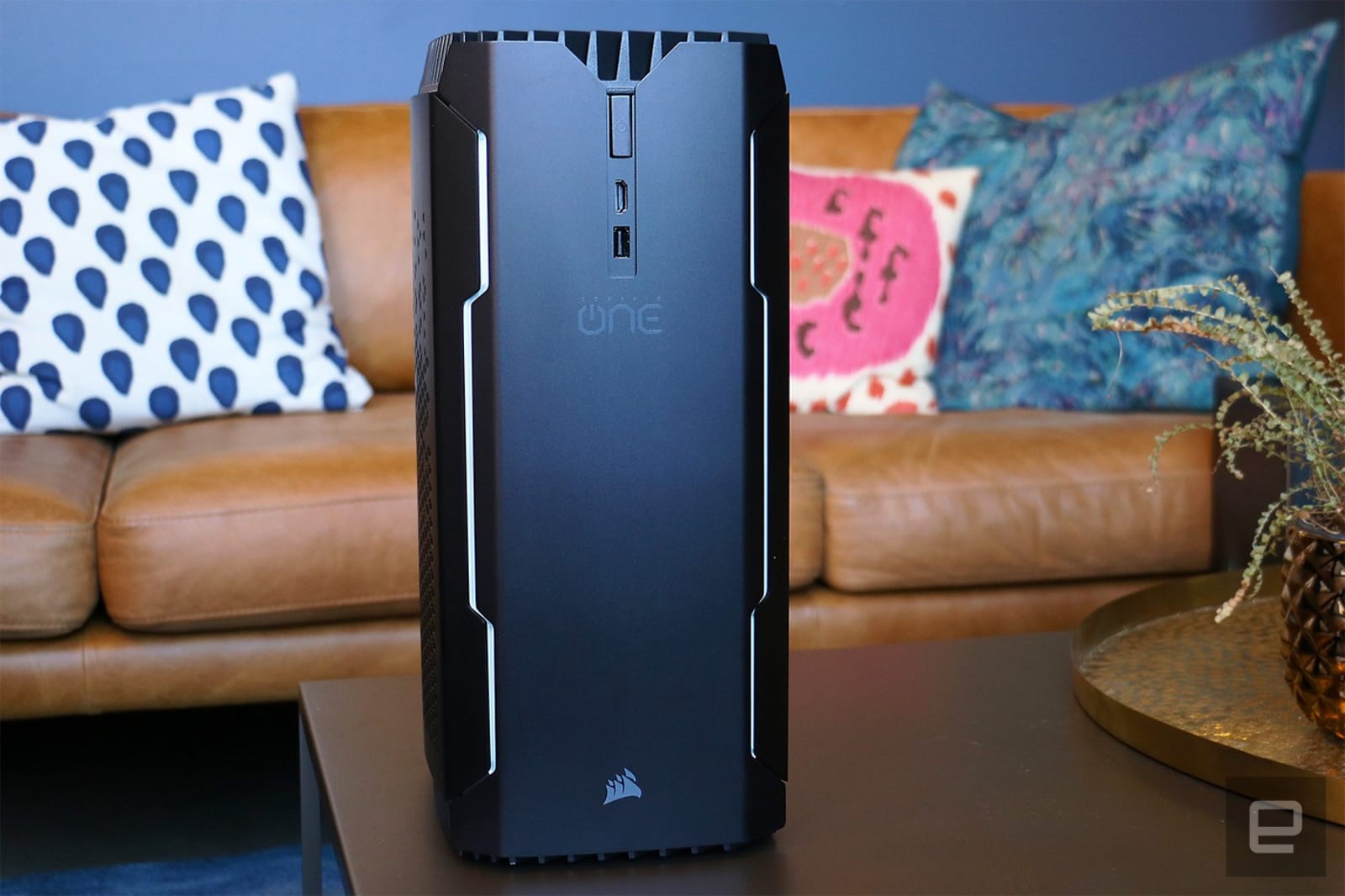 It's been almost two months since PC parts maker Corsair teased its first finished computer, giving us nothing but a name and a picture of the front and sides of the system. Now, the company is finally ready to show off the Corsair One in detail, and we've already had a chance to take a closer look at the new system. But before we let you start drooling over the pictures of this VR-ready gaming PC, here's some basic information. The Corsair One will be available for $1,800 (a $2,200 Pro version is also available) via Amazon, Newegg and other online retailers starting today. We tried the Corsair One Pro in particular, and promptly took a slew of pictures for those of you who love gaming hardware. Enjoy.

Gallery: A closer look at the Corsair One Pro PC | 22 Photos For that price, you get a seventh-generation 4.2GHz (4.5GHz boost) Intel Core i7-7700K processor, an NVIDIA GTX1070 graphics chip (GTX1080 on the Pro), 16GB of RAM, a 240GB SSD (480GB on the Pro), a 1TB hard drive (2TB on the Pro) and a liquid-cooling system wrapped up in a black-and-blue Tron-esque enclosure. Whew. If you build your own computers, or are really into obscure PC component information, you'll probably appreciate knowing that the One uses a Z270 motherboard and Corsair's SFX 80 Gold small form factor power supply unit.

The 14.9-inch-tall (or 380mm) tower is made of blasted aluminum, and features a triangular ventilation setup that draws air in from the vents on either side and pushes it out through the fan at the top of the chamber. All told, the Corsair One weighs a hefty 7.2kg, or 15.8 pounds. 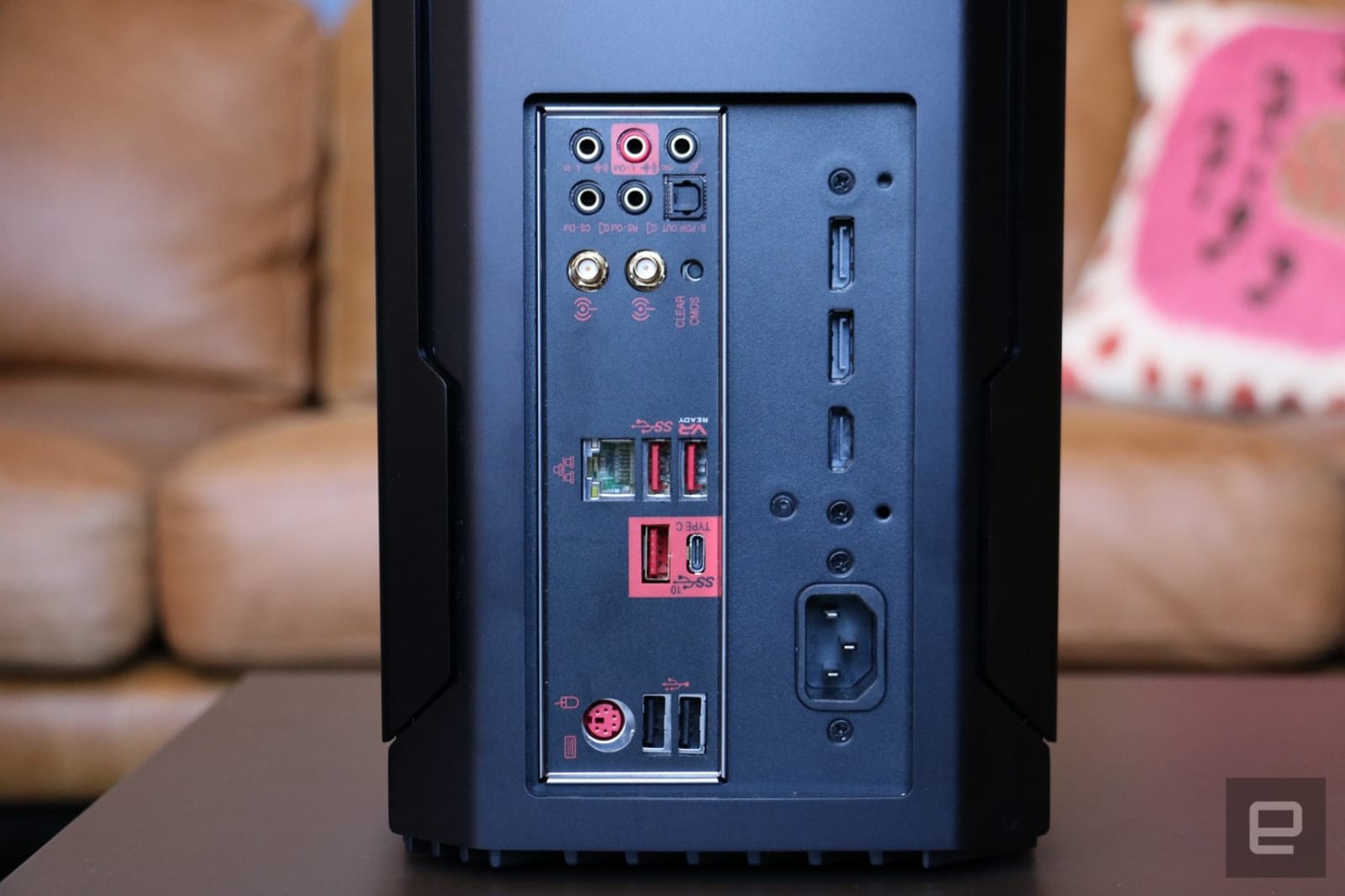 The device was built with gamers and PC-upgrading enthusiasts in mind, but it's not meant to be taken apart. Although you can remove the tower's top, which is attached to the fan, Corsair says the One wasn't designed to be a "user serviceable system." A company spokesperson tells Engadget that the One's dis-assembly and re-assembly is "a lot more involved than a traditional CORSAIR DIY product -- that's why we sell it as a fully built system, and not a DIY kit." To that end, the company is also offering a two-year warranty, and will provide rapid-warranty replacement for faulty parts, as well as service centers for in-warranty upgrades.

As it stands, the system should provide enough power and functionality to please those who want a VR-ready system. It has, on its front and back, a total of seven USB ports, two HDMI 2.0 sockets, two DisplayPort 1.4 connections as well as Ethernet and audio jacks. The Corsair One will also run what its makers promise is a clean, bloatware-free version of Windows 10 Home. Considering prices for gaming PCs can range between $500 and even up to $8,000, the Corsair One's cost is reasonable for what it offers. An even higher-specced version, called the Corsair One Pro (Webstore), is also available for $2,300, if the first two aren't quite powerful enough for your intense gaming needs. The Corsair One's price comes close to what ASUS asked for its ROG GCB20 gaming tower at launch. That machine is also VR ready, though it uses older parts.

In this article: Corsair, corsairone, diy, do it yourself, doityourself, gadgetry, gadgets, gear, hands-on, home, pc, PcGaming, personal computing, personalcomputing
All products recommended by Engadget are selected by our editorial team, independent of our parent company. Some of our stories include affiliate links. If you buy something through one of these links, we may earn an affiliate commission.