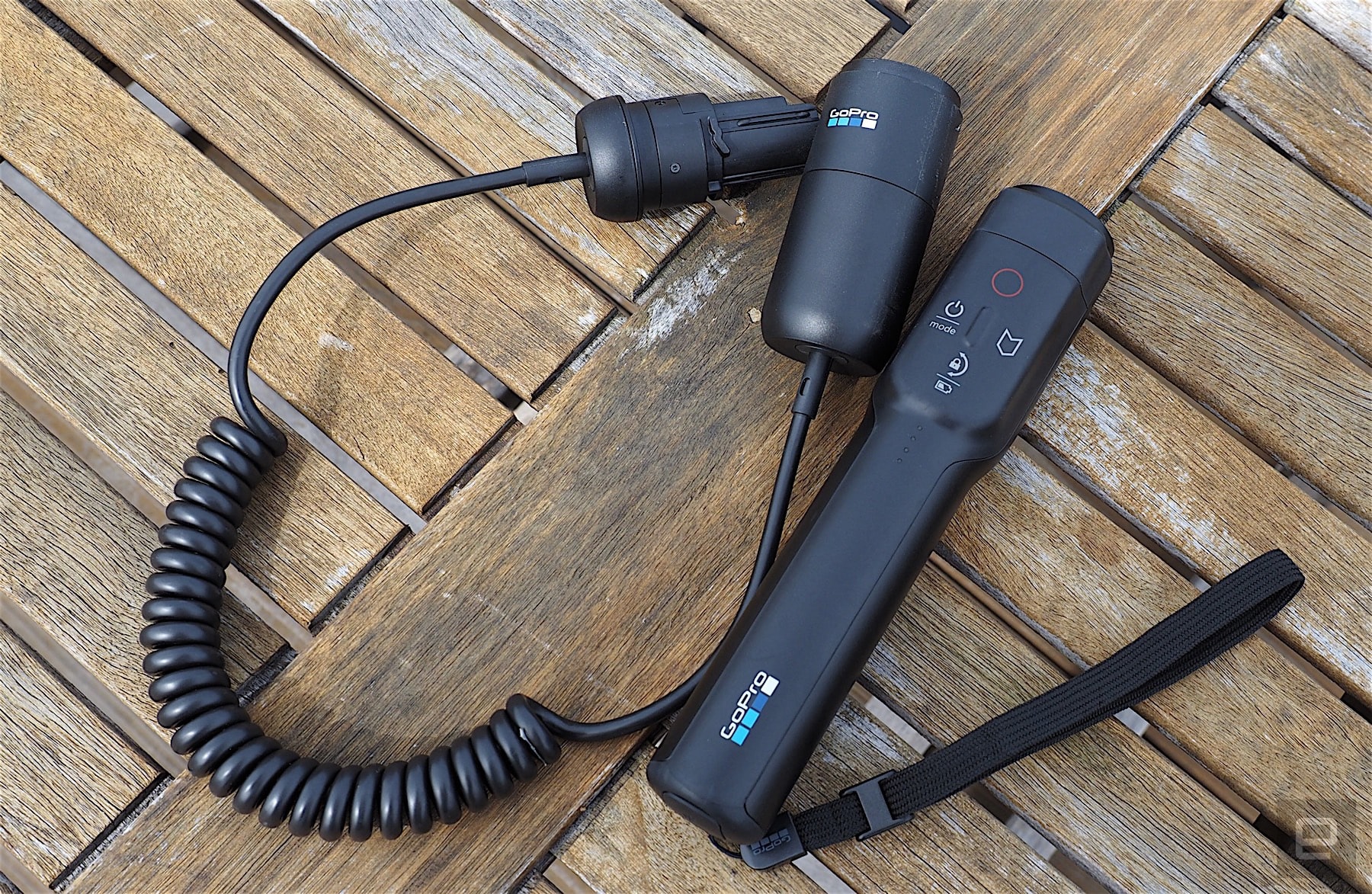 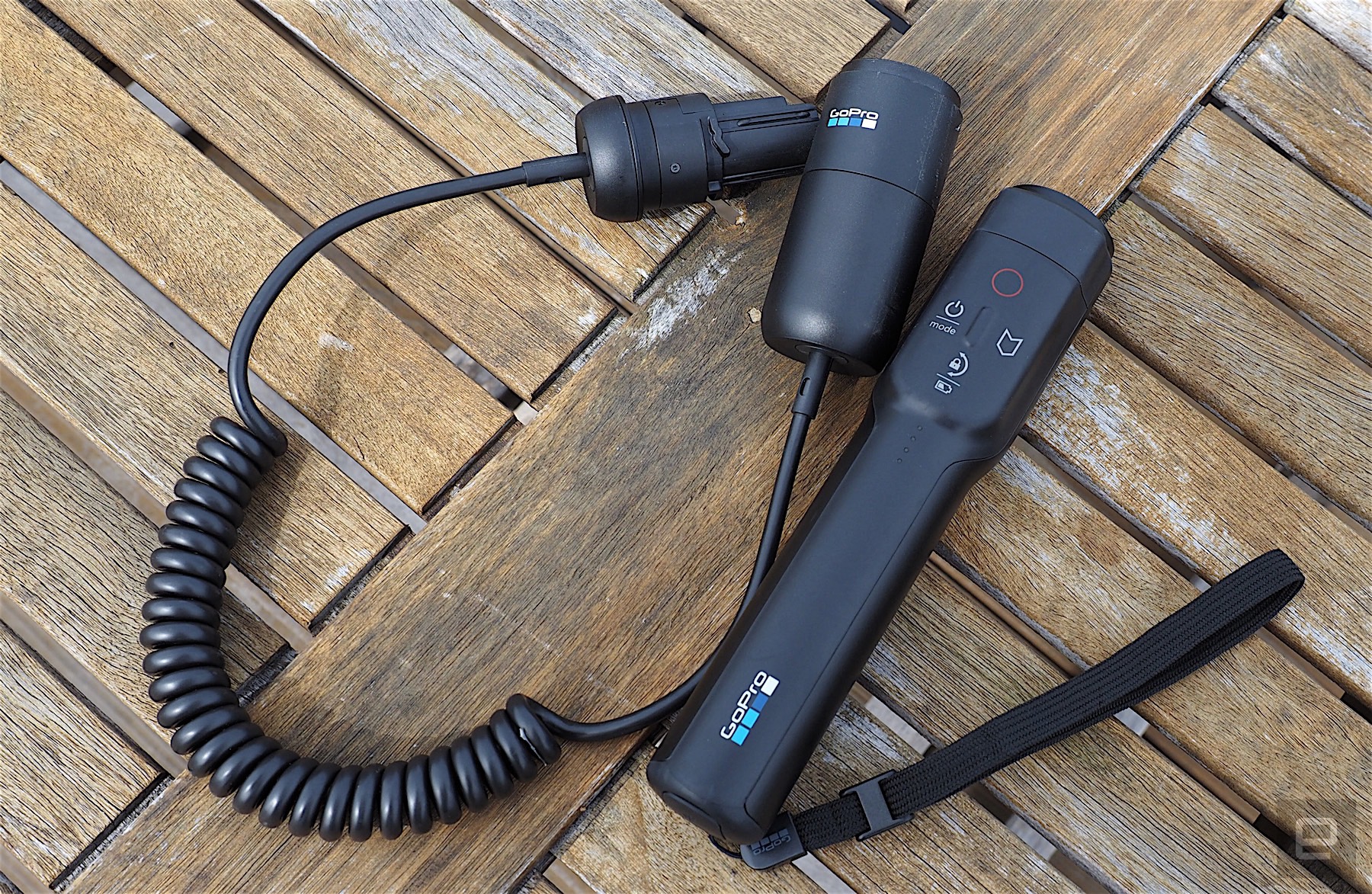 When GoPro launched Karma at the end of the last year, company CEO Nick Woodman was keen to point out that it's "So much more than a drone." That statement was mostly referring to the bundled handheld grip, which uses the stabilizer from the quadcopter, bringing smooth video to ground-based activities as well. Now, there's a new member of the Karma family, with the self-explanatory name of "Karma Grip Extension Cable." The accessory (pictured on the left, above) brings the gimbal's video-smoothing skills to even more points of view. Albeit at a price.

The Karma Grip already comes with a mounting ring that makes it wearable, as you can attach it to any existing mount (more or less) in your collection. That said, as the Karma grip is about the size of a standard flashlight, it isn't ideal for wearing on helmets or perching on handlebars. With the new extension cable, you can slip the grip part in a pocket or backpack and just mount the gimbal and camera (and the three inch-ish connector) on the aforementioned helmets and handlebars (and beyond).

If you look at the photo above though, you'll note that there's a coiled tether between the connection plugs. It's extendable, but it's also pretty tight. Tight enough that the distance between your helmet and your pocket is probably too far to be comfortable. GoPro tells me that the cable is designed to be rugged, and good enough to deliver the power required for the gimbal.

Even without the grip, the gimbal and the part it slides into are still a touch bigger than many other wearable gimbals on the market (of which, there are a few,) and most don't need wires for power, putting the batteries in the gimbal instead. For GoPro's part, if you ignore the tether, the gimbal doesn't have the cheap look that most of the others do, and definitely feels more robust than any I've used to date. 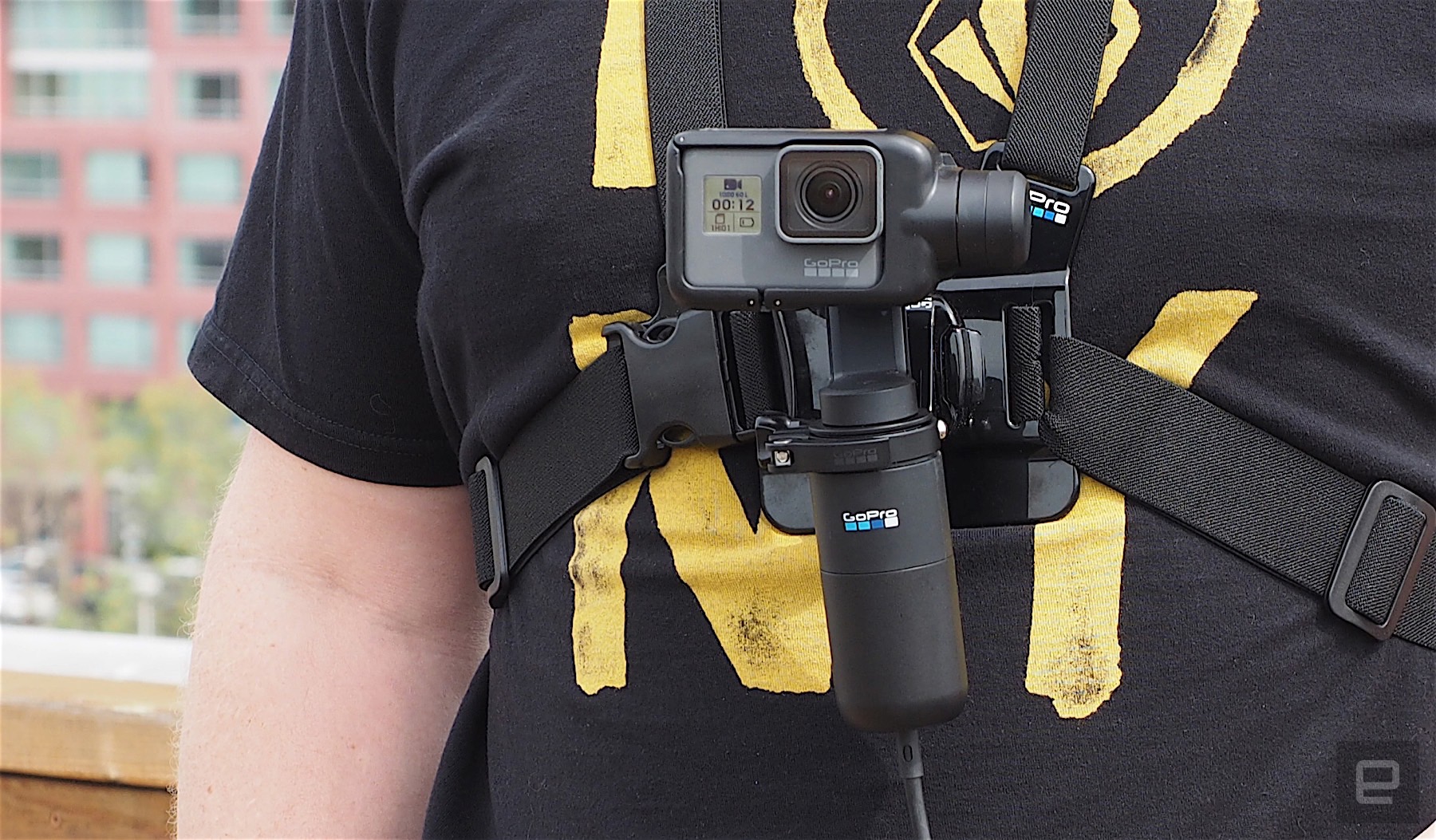 Then, there's the price. The extension cable is pretty much just that, a cable. Two connectors (one for the grip, one for the gimbal) and a cable between them. For this GoPro wants $100, once it goes on sale this Sunday. When bought without the drone, the handheld Karma Grip is $300, and that includes: The detachable grip, the actual gimbal (the part with the motors), a harness for your camera and all the cables and mount ring you need to get going -- plus a snazzy case. Asking another $100 for the cable seems a little out of balance with the value proposition GoPro was going for with its modular kit at launch.

That said, while technically GoPro is a camera company, it's also a master marketing company. Watch the video below, and you'll see the new extension cable being used in a manner of exciting activities, all being recorded with stability that GoPro users have been dreaming of for years. (The Hero 5 Black comes with built-in stabilization, but it's not a patch on the gimbal.)

If you've ever tried wearing a GoPro attached to a chest strap, you'll know that the footage gets shaky, fast. I tried to record several runs when I was training for a marathon a couple of years ago, and most of the footage was useless. While wearing this, I can instantly see the difference that it makes. There's still movement, but it's way less, resulting in much more usable video. I can imagine there are people much more adventurous than I that would appreciate the added flexibility the accessory brings, after all, one cable could be the difference between decent footage, or total garbage. Though likewise, the tethered design will not suit a number of activities or mount locations at all.

Along with the new extension cable, GoPro's also releasing new firmware for the Hero 5 Black and Hero 5 Session that adds new languages for voice control: Korean, Russian and Portuguese. GoPro said there would be more language support in the pipeline, and it's coming good on that promise. Hero 5 Black owners will also get a few new features, such as the ability to pull stills from a multi-shot series and new Protune modes. The Session also gets a new 4K/24fps video mode, and a bump in field of view options when shooting at 1080p.

In this article: actioncamera, cable, cameras, extension, gadgetry, gadgets, gear, gimbal, gopro, grip, karma
All products recommended by Engadget are selected by our editorial team, independent of our parent company. Some of our stories include affiliate links. If you buy something through one of these links, we may earn an affiliate commission.