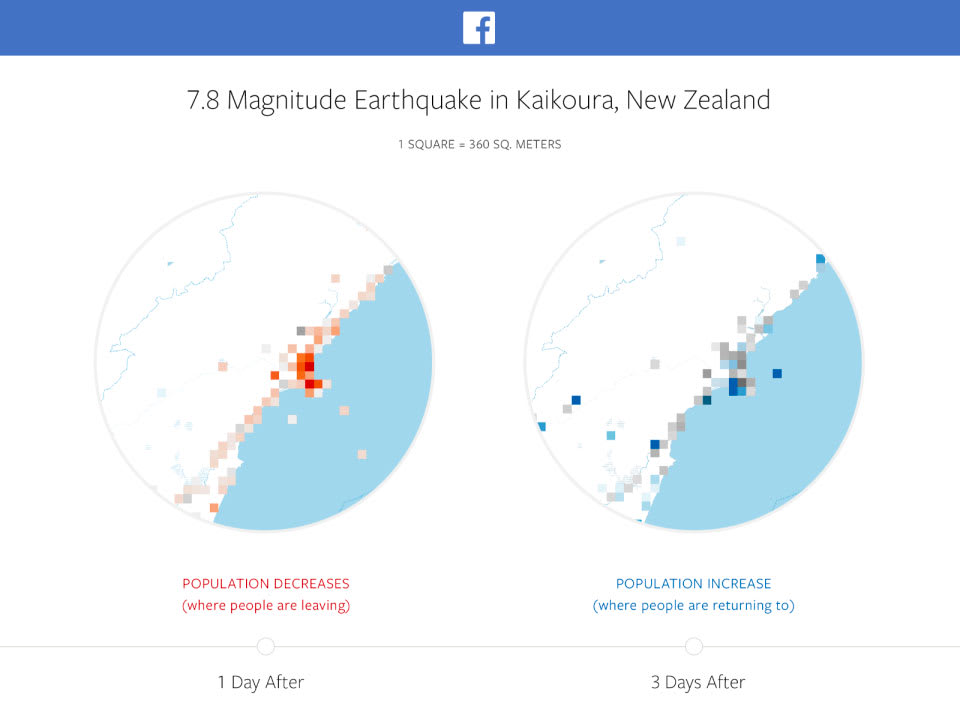 When natural disasters hit, the role of a site like Facebook switches from a fun social networking platform to a tool that can be used to save lives. Fully aware of the role it plays in natural disasters, Facebook has today announced that it will be using its software to lend emergency services a helping hand.

In order to achieve this, Facebook has created three different types of maps to help authorities track down survivors after a natural disaster. The first of the three uses Facebook's existing tech to create a location density map. After anonymizing the data, it will show relief organizations where people were located before, during and after a disaster hits. With traditional communication networks often rendered useless by natural disasters, Facebook is hoping that this information will help the relevant organizations see which areas have been the worst affected by a catastrophe.

The second is a movement map, tracking patterns of people's movement between cities and neighborhoods over set time periods. This would help the authorities choose where to deploy resources and could even potentially help them control traffic in congested areas.

The third and final map the social networking company is implementing is one based on its existing Safety Check tool. The idea is that by sharing the areas that people feel safe enough to check in at, organizations can then clearly see where they should be focusing their relief efforts.

So far, Facebook has confirmed that UNICEF, the Red Cross and the World Food Programme will be the only organizations with access to the data. The company does saw that in time, they intend to share the data with other organizations and even relevant governments. As you'd expect, Facebook has been keen to stress that it will only share information with those who it feels can be trusted with users' privacy.

Source: Facebook Newsroom
In this article: applenews, DisasterRelief, facebook, internet, LocationTracking, RedCross, unicef
All products recommended by Engadget are selected by our editorial team, independent of our parent company. Some of our stories include affiliate links. If you buy something through one of these links, we may earn an affiliate commission.