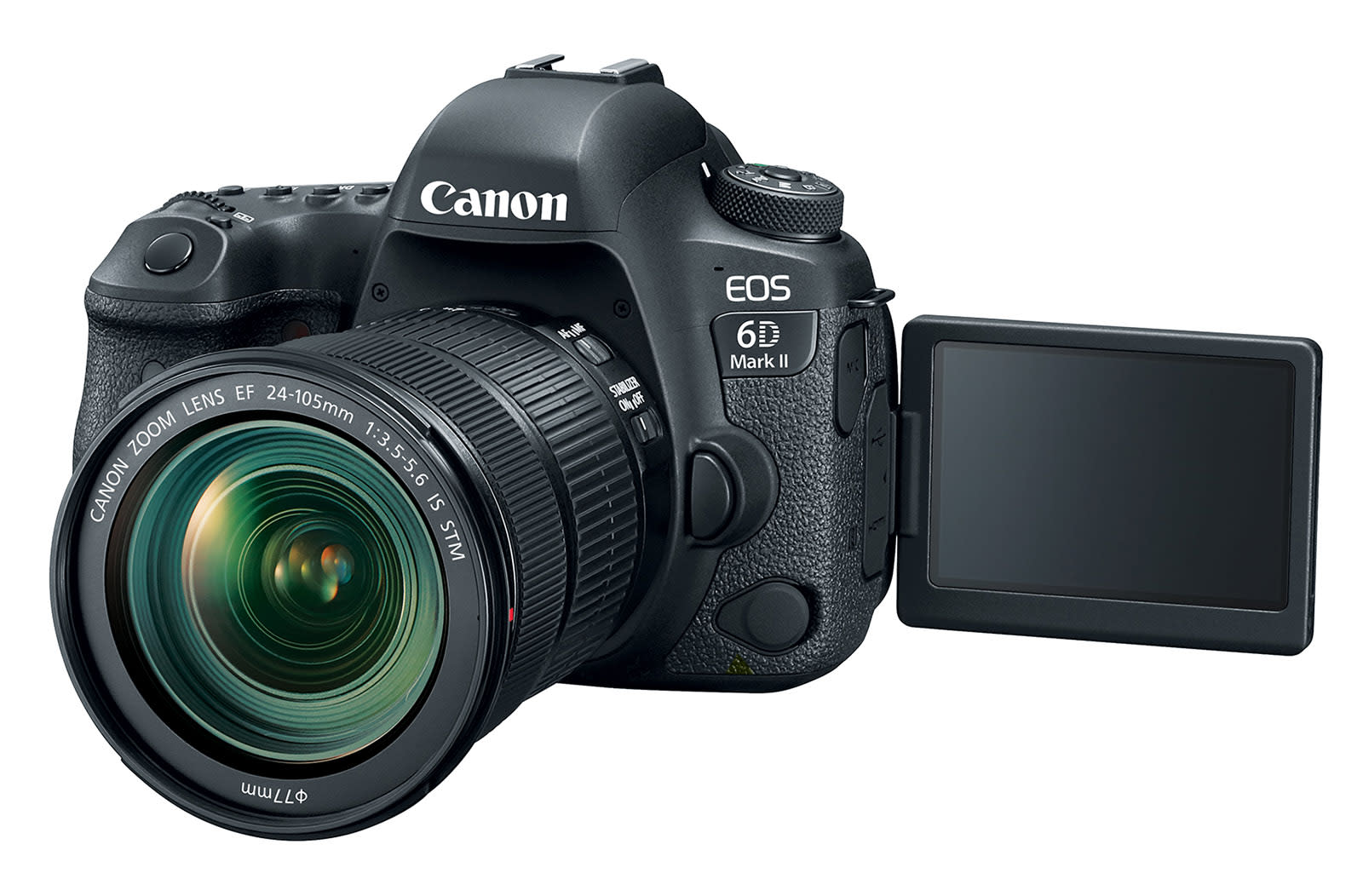 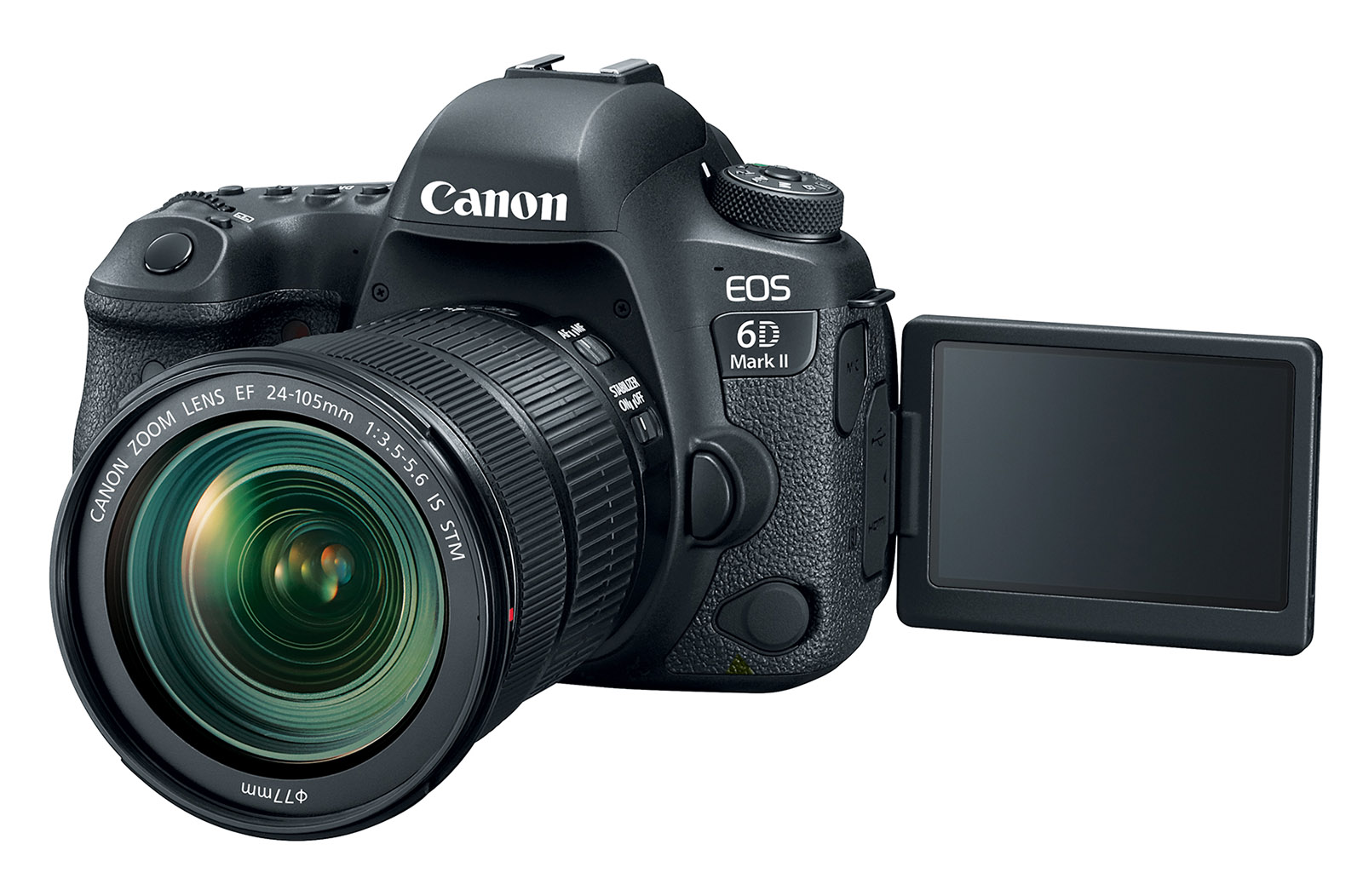 Nearly four years after it first launched its original EOS 6D budget full-frame camera, Canon has unveiled a successor. The EOS 6D Mark II improves on the past model in nearly every way, offering more connection options, resolution, much faster autofocus and higher sensitivity, while retaining the light weight and good handling we liked about the original. It falls down in a key area, however, offering just 1080p video resolution rather than the 4K you'd expect in a modern DSLR.

The improvements in the new new model revolve mostly around the new sensor. Instead of 20.2 megapixels, it captures 26.2 million pixels, about 30 percent more resolution. Paired with a new Digic 7 processor, you can now shoot at 6.5 fps continuously and grab up to 150 JPEG or 21 RAW images before the buffer fills.

Canon says the new 45 point cross-type system makes autofocus much faster, and there's a new dual-pixel autofocus that offers better speed in liveview mode, too. You can shoot with less light thanks to an improved maximum native ISO of 40,000, compared to 25,600 in the last model. As before, that's expandable to ISO 102,400. Another big change is the 1.04 million dot monitor, which now has a touchscreen and "vari-angle" adjustment. That opens up new possibilities like touch shutter and focus, making it easier to switch focus from one subject to another when shooting video. At the same time, the more twistable rear monitor makes it easier to take selfies. On top of having WiFi as before, new wireless features include Bluetooth 4.0 and NFC, making it a lot easier to set up, shoot remotely, or sync with your phone.

The body is just slightly heavier than the original at 685 grams (24.1 ounces) instead of 680 grams, but it's still the lightest full-frame DSLR out there. (Sony's mirrorless A7 II is much lighter at 600 grams, or 21 ounces, mind you.) The new weather-proof construction is more robust and Canon has made it easier to handle, thanks to a deeper, edgier grip.

Now for the bad news. The EOS 6D Mark II only has 1080p, 60 fps video and not 4K, something that's unacceptable for a 2017 camera that costs $2,000. Canon may be hoping that users who really need it will go for a 5D Mark IV, a DSLR that costs around $3,500. But 4K is available in nearly every new mirrorless, high-end compact, and smartphone camera, so consumers will expect it in a fancy DSLR nowadays. The 6D II does offer one new video feature, however, "HDR Movie," which gives you more details in black and highlight areas at up to 1080p/29.97 fps.

Canon told us in a pre-briefing that most photographers only publish video at 1080p and that 4K files are "heavy," so it felt the option wasn't needed. However, The 6D Mark II's specs were leaked onto the internet quite awhile ago and almost every comment on the leak posts has bashed the lack of 4K. To be fair, there aren't any other full-frame cameras in the 6D II's price range that go beyond 1080p. However, for around $2,600 or so, you can pick up a new full-frame Sony A7R II or A7S II, both of which can handle 4K.

Source: Canon
In this article: 6DMarkII, cameras, canon, DualPixelCMOS, EOS6DMarkII, EOSRebelSL2, Full-Frame, Rebel
All products recommended by Engadget are selected by our editorial team, independent of our parent company. Some of our stories include affiliate links. If you buy something through one of these links, we may earn an affiliate commission.