A lot of creators rely on YouTube to make a living, but despite recent efforts to improve, the Google-owned site still takes videos down for no good reason. On top of that, mismatching ads to offensive videos recently spawned an "adpocalypse" that deprived legitimate creators of revenue. In a blog post, YouTube now says it will unveil new icons to let you know to what extent your video is being monetized. It'll also give you a new way to appeal directly in the Video Manager for copyright and community guideline problems.

Three new icons (shown below) will appear in the Creator Studio over the next few weeks to show creators how their videos are monetized. The first, a dollar sign in a green circle, means that you're earning money via "the broadest set of advertisers" as well as on YouTube Red.

The dollar sign in a yellow circle, however, means that a video can only earn money from YouTube Red or a limited set of ads, because it has been deemed "not suitable for all advertisers." Confusingly, it could also mean that it has been fully demonetized because "it doesn't meet our advertising guidelines," YouTube says.

Finally, a slashed-out dollar sign means videos will get no revenue from YouTube Red or advertising. "This might be because of a copyright strike, Content ID claim, or Community Guidelines strike," it explains. (A "strike" means the video has been taken down completely, so it obviously isn't earning any revenue.) 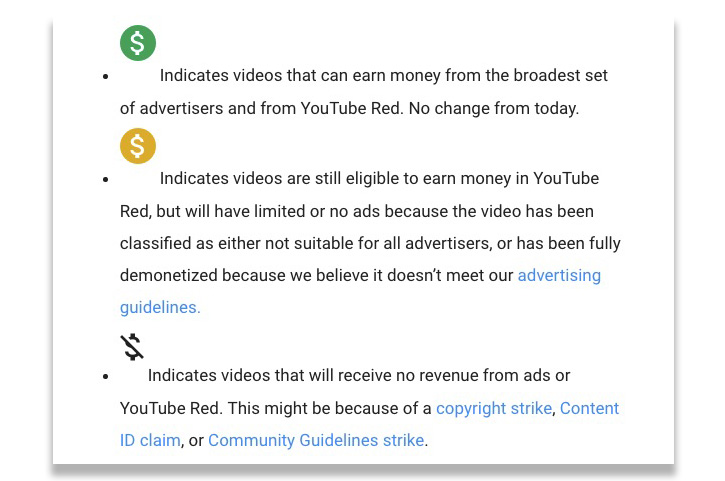 YouTube points out that the new icons don't change your earnings in any way, but at least "give you a more detailed understanding of whether your video has been identified as not suitable for all advertisers." Should there be a problem, you can launch an appeal directly from the Video Manager, rather than being shuffled over to another area as is the case now. "We want our systems to get better and better -- and every appeal helps," it adds.

Last year, Google created a team to deal with monetization and policy issues, but the "adpocalypse" problem resulting from ads on offensive videos happened well after that. Since then, however, Google has emphasized "Google Preferred," or the five percent most viewed channels, and many advertisers have returned there, according to Adweek.

With 1.5 billion monthly users, the site has a lot of content to deal with, which makes it tough to separate legitimate takedown requests from spurious ones. It didn't say exactly how it plans to deal with the extra appeals that the new monetization system will no doubt create.

Source: YouTube
In this article: Advertising, Appeals, av, Copyright, Creators, entertainment, google, Monetization, YouTube
All products recommended by Engadget are selected by our editorial team, independent of our parent company. Some of our stories include affiliate links. If you buy something through one of these links, we may earn an affiliate commission.