The 145-mile jaunt between Flagstaff, Arizona, and Phoenix is almost entirely downhill. With a drop of approximately 5,800 feet between the two cities, the road that joins them -- Interstate 17 -- has multiple warnings about saving your brakes (meant mostly for big rigs) and is peppered with sharper twists and turns than your typical highway. Yet, while I was behind the wheel, I did almost nothing for the entire drive thanks to Cadillac's new Super Cruise feature on the 2018 CT6. Super Cruise is Cadillac's answer to semi-autonomous features from BMW, Mercedes and of course, Tesla's Autopilot. But unlike those systems where you're chastised by the car within moments of removing your mitts from the wheel until you return them, Super Cruise is totally hands-free.

Before we get into the nitty-gritty of the car and Super Cruise, let's talk about the steering wheel with a built-in light. I'll admit when Cadillac announced its semi-autonomous feature and showed off the light-infused steering wheel, I rolled my eyes. It seemed gimmicky and more importantly, ugly. When you drop a big wad of cash on a luxury car, the last thing you want is a feature that just annoys your senses. And yet, when I sat behind of the wheel CT6, it didn't seem so bad. While I was actually driving, the wheel's notification lights made sure I knew exactly which driving mode I was in. 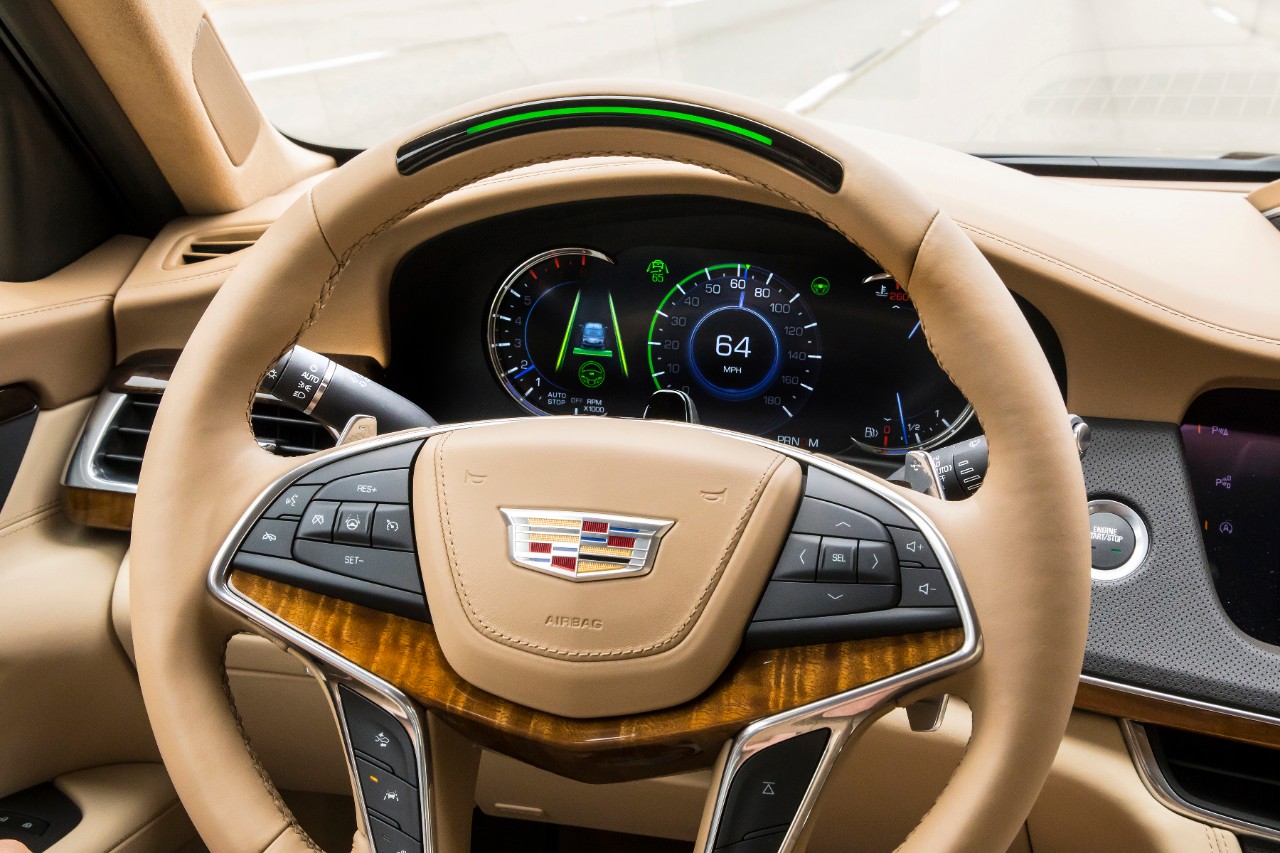 When the car is in Super Cruise mode, the wheel glows green. When it determines that you're not paying enough attention to the road it flashes green and when you've ignored that or the vehicle encounters something it can't handle on its own, it flashes red.

Super Cruise also has a sort of "standby" mode -- if you take the wheel to switch lanes (the car will not switch lanes for you) the lights will pulse blue to indicate that as soon as the car is back in the middle of a lane, Super Cruise will take over again.

This all leads me writing something I didn't expect: I like the light on the steering wheel. It's helpful without being overbearing. Yeah, I'm also surprised by that admission. But there you have it. Yes, having a light bar embedded in a steering wheel is slightly odd, but it adds a layer of safety to a feature that'll be brand new to most of the people that buy this car. Changing the way people drive usually involves changing the way they interact with their vehicles, especially when they're told they can take their hands off the wheel for an extended period of time.

Because you can leave your hands by your sides, the system uses an infrared camera mounted on the steering column to make sure you're still ready to take over if things go south. It tracks your eyes, nose, mouth and ears and figures out where you're looking. If you're looking forward out the windshield or checking your mirrors, you're fine. But let's say you start staring out the side window or worse, at your phone, the car prompts you to start paying attention by flashing the green steering wheel light. If you ignore that, the flashing light on the wheel and accompanying audible warning for too long, the car will slow down, stop, turn on the flashers and call the authorities via OnStar.

I did turn my head to test the feature (while keeping a side eye on the road), and the car reacted by first flashing green then red to get my attention. Even when I was wearing dark sunglasses, it was able to determine where I was looking. Cadillac says that if the IR camera can't see your eyes, it uses the rest of your facial features to see where you're looking. The only time the system failed is when it had direct sunlight blinding its sensor. In the nearly 1,000 miles I drove the car that only happened for about 10 minutes. I continued on the same heading on the painfully straight Interstate 10, the sun moved slightly in the sky, and the feature was back in business and I was back to sort-of driving. 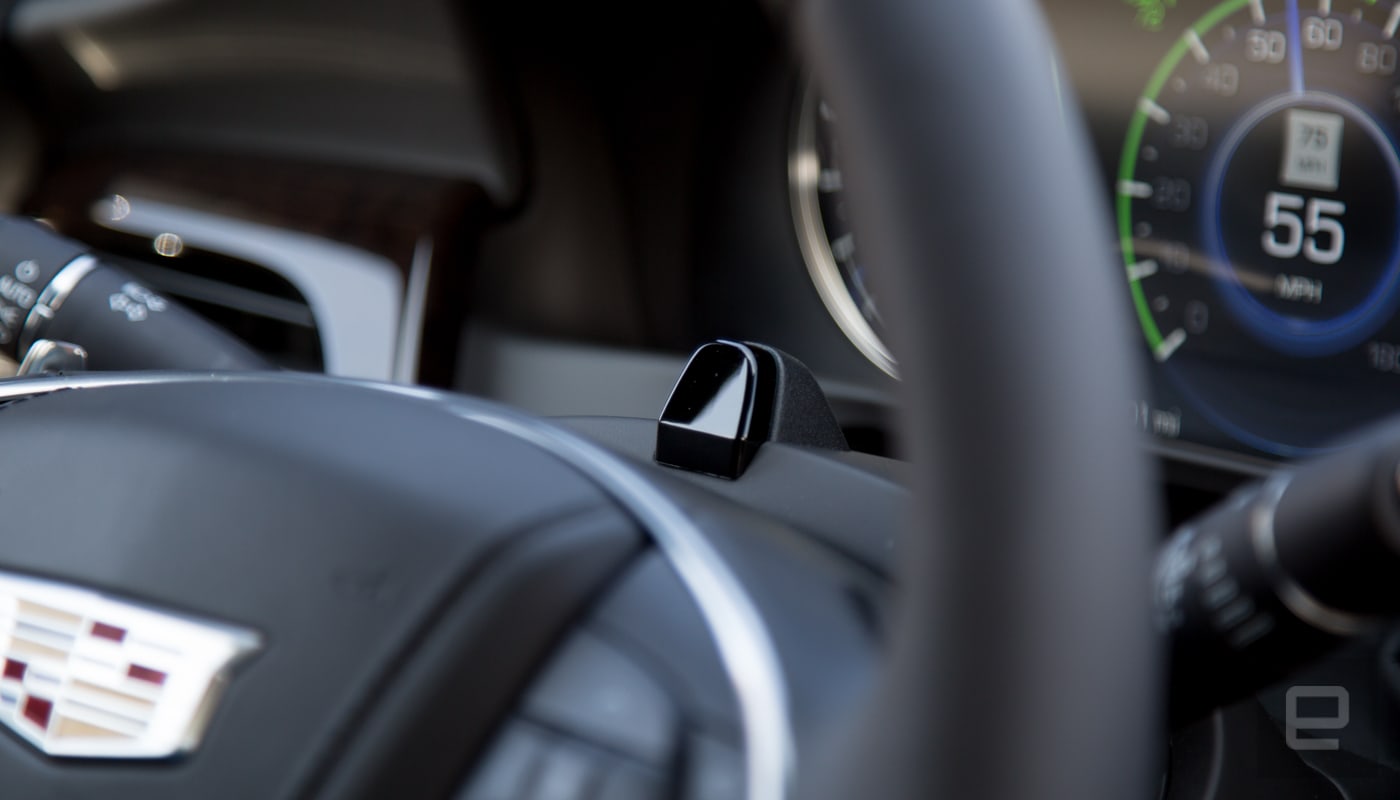 During my two very long drives with the 2018 $85,300 high-end Platinum trim level of the CT6 with Super Cruise (first from Sante Fe to Phoenix then from Phoenix to LA), 80 percent of the time the car was doing all the work while I rested my hands on my legs. Like all new semi-autonomous features, it was initially unnerving to give up that much control while cruising down the highway at 70 miles per hour. I've seen videos of, and experienced, features like this suddenly jerk out of their lane so as we started to pass our first big rig I had my hands hovering over the steering wheel.

In fact, I did that for the first dozen or so semitrucks, and yet at no time did the car drift into danger or deviate from the center of the lane. By the end of the first day's drive, Super Cruise's promise of truly hands-free cruising down the freeway had delivered. Sure there were a few hiccups; none of these systems are infallible and you should always, ALWAYS, give the road your full attention and be ready to take over control at any time. But I'm a fan of Super Cruise even though it comes with a few caveats.

First off, it's geo-fenced to divided highways without any sort of cross traffic. You can't trick it into working on a back road or highway with grade crossing. But as the saying goes, that's not a bug, it's a feature. A big portion of the system that makes Super Cruise possible is the high-definition LiDAR maps that ship with every car. 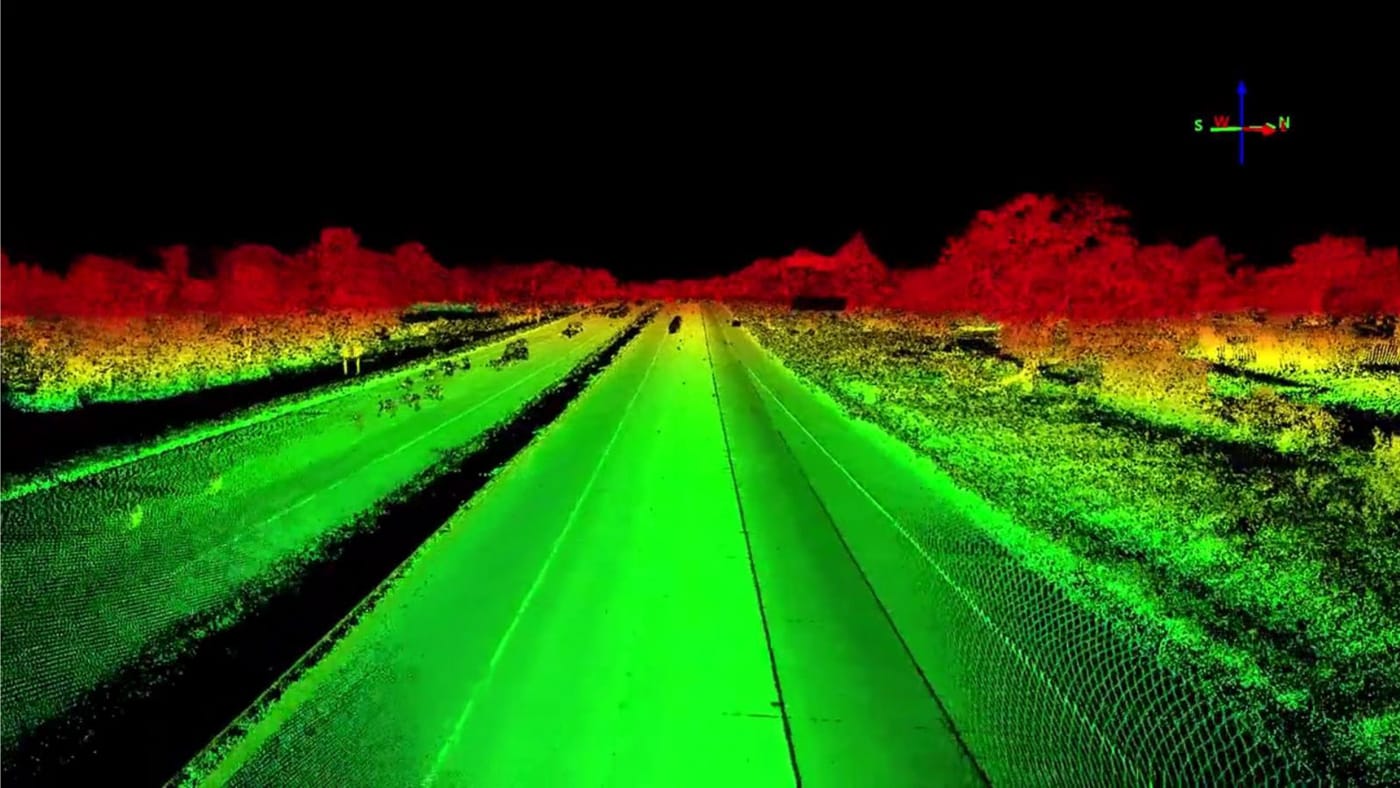 Cadillac teamed up with mapping company Ushr to create LiDAR maps of approximately 160,000 miles of divided highway in the United States and Canada. The automaker uses those maps along with the car's high-precision GPS, long-range radar and camera to keep the car centered in a lane. Cadillac says the LiDAR maps are precise within 10 centimeters and are updated quarterly to take into account changes to the roads.

While the maps help power a feature that keeps the CT6 centered, it also removes any chance that you'll be able to use this feature anywhere Cadillac has deemed unworthy of Super Cruise. This could turn off some potential buyers. For others, it's a stop gap from them trying to make the car do something it's not ready to accomplish. I don't see it as an issue and judging by the amount of YouTube videos of Tesla owners "hacking" their cars to run hands-free in environments Autopilot is not built to handle, it's probably a worthy restriction at least for the sake of other drivers on the road.

Super Cruise will work between zero and 85 miles per hour, which makes it great for long boring road trips and the worst part of driving: commuting. In addition to solidly staying in a lane for long periods of time at highway speeds, it was also handled dense Los Angeles traffic with ease for the most part.

Cadillac annotated its LiDAR maps with information about interchanges, on- and off-ramps, lane endings, toll booths and other items you'll encounter on the road. When those are approaching, the system will instruct you take over driving. Because the map can see 2,500 meters (about 1.5 miles) in front of the car, it's usually before the driver notices something is about to happen.

On more than a few occasions, I was prompted take control for a mysterious reason that would later reveal itself. While driving on Interstate 10 through the Arizona and California desert, those instances were few and far between. Los Angeles' complex interchanges (which frankly confuse most humans) on the other hand meant I was taking control of the car on a regular basis. It wasn't annoying but it's worth noting. Yet it was when LA traffic came to a standstill that the value of Super Cruise was really apparent. 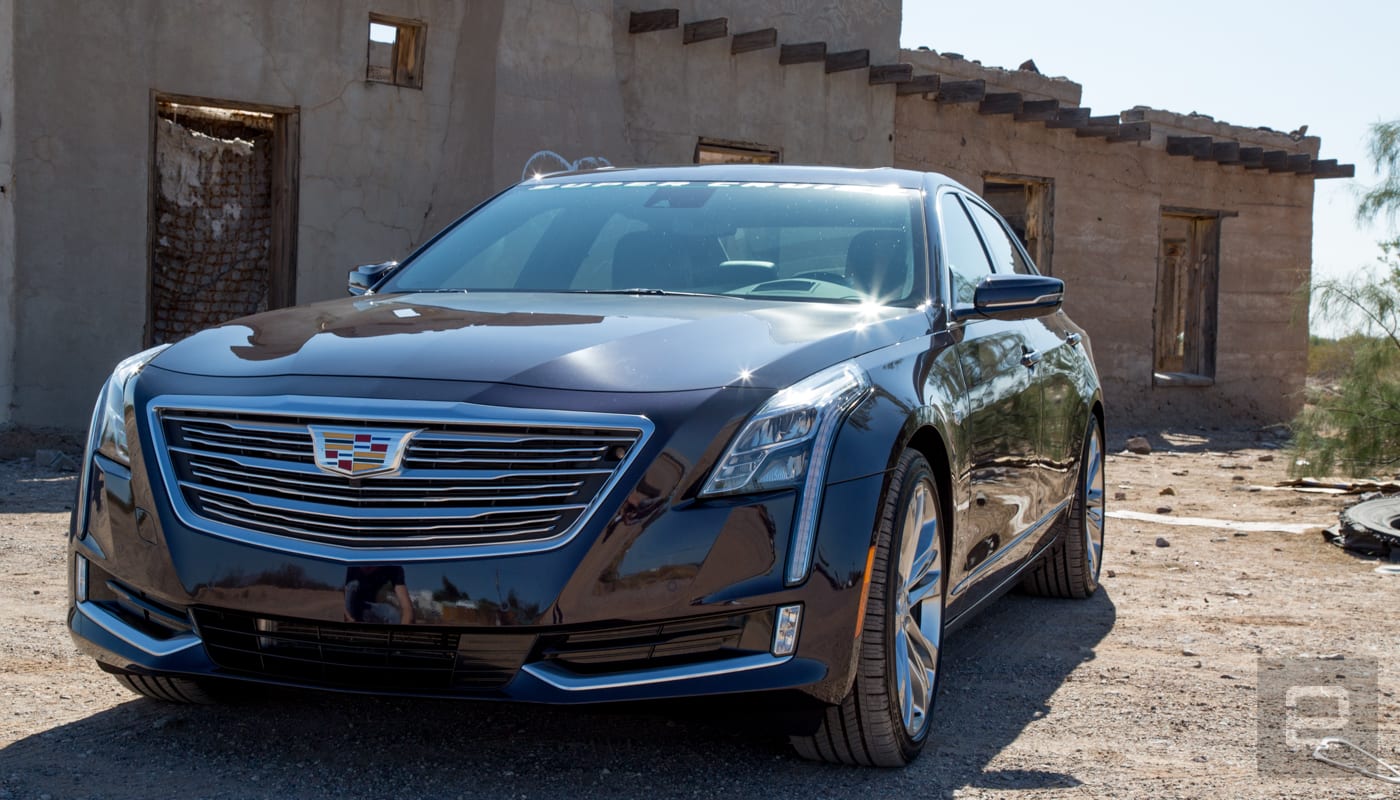 The ability to track the vehicle ahead of it and stop and start with traffic while staying in its lane is a blessing for commuters. Yes, you're still stuck in traffic, but your stress level is going to go down because the car is doing all the monotonous work. A few vehicles did cut me off and the CT6 reacted by slowing down or stopping without my input, but one driver decided to throw caution to the wind and turned into my lane with only inches to spare and the car had me take over. It's a nice reminder that you need to stay alert with these systems and that people are horrible drivers.

All that tech is crammed into the luxury CT6 sedan that we reviewed last year. Other than Super Cruise, it's essentially the exact same car. It's comfortable and chock full amenities like massaging seats and rear passenger video screens. The Platinum edition I drove had twin-turbo 3.0 liter engine pumping out 404 horsepower and 400 pounds of torque. It's a beast that cruises smoothly on the high, but when it's needed can chew up the pavement. I'm still not a fan of the eight-speed automatic transmission during spirited driving, but the paddle shifters are solid in that type of environment and frankly 95 percent of the time, it's not even remotely an issue.

Of course all that fancy and Super Cruise means you're going to be shelling out some big money. On the Premium trim of the car, which starts at $66,300, Super Cruise is part of a $5,000 option that includes adaptive cruise control. Meanwhile, the top-of-the-line Platinum edition starts at $85,300 with Super Cruise standard.

While Super Cruise is currently only available on the CT6, expect to see it land on the Escalade in the next few years and if enough buyers tack it onto their cars, it's very likely the feature will permeate the entire Cadillac line and other GM vehicles. 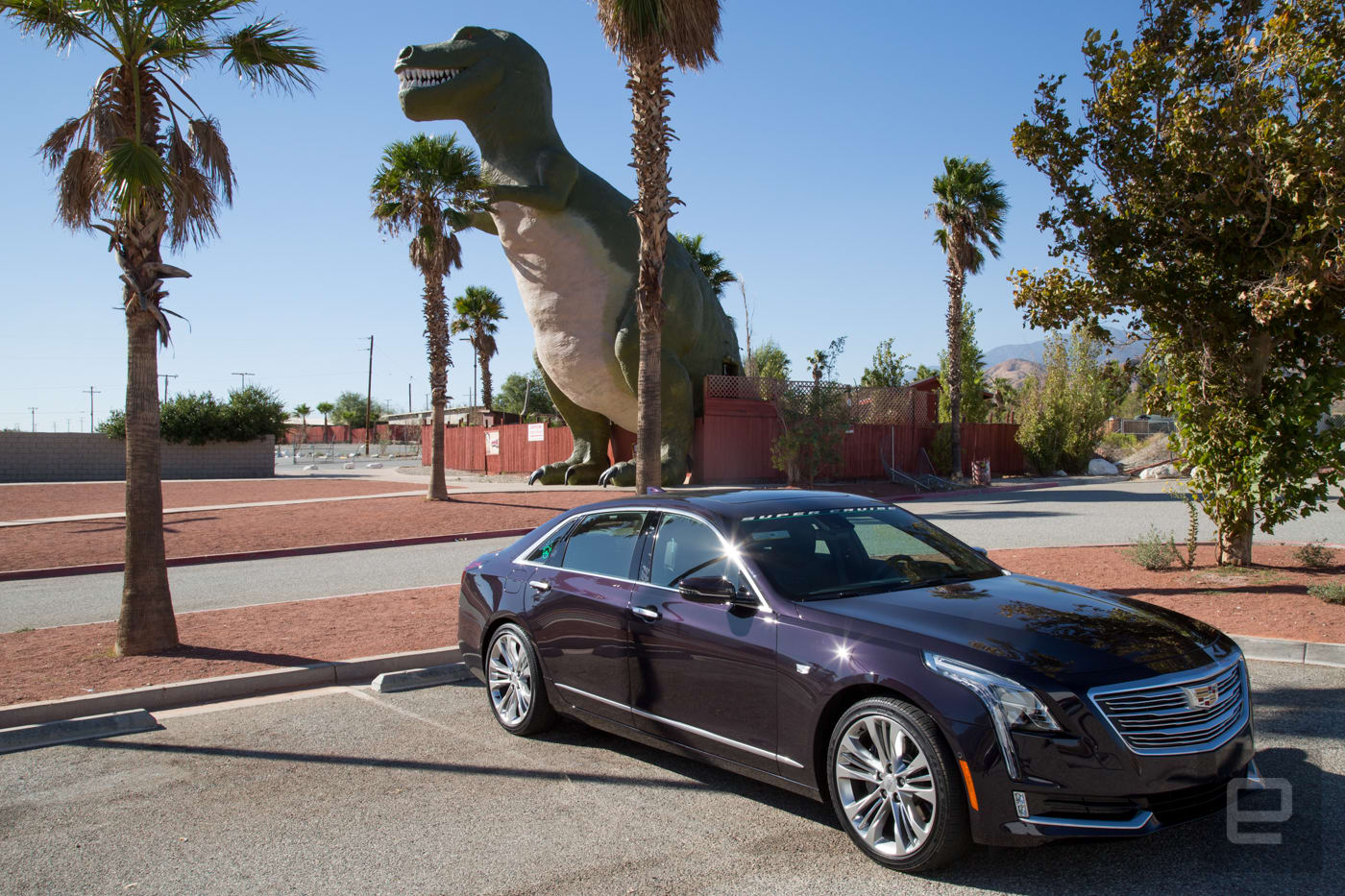 Will those cars get the light steering wheel though? It's tough to tell. As drivers become more accustomed to semi-autonomous features determining which mode a car is in might become second nature. For now, though, Super Cruise is a surprisingly solid solution to highway driving with a totally not annoying green light at the top of the wheel leading the way.

In this article: autonomous, Cadillac, CT6, gadgetry, gadgets, gear, lidar, review, robots, selfdriving, semiautonomous, supercruise, transportation
All products recommended by Engadget are selected by our editorial team, independent of our parent company. Some of our stories include affiliate links. If you buy something through one of these links, we may earn an affiliate commission.