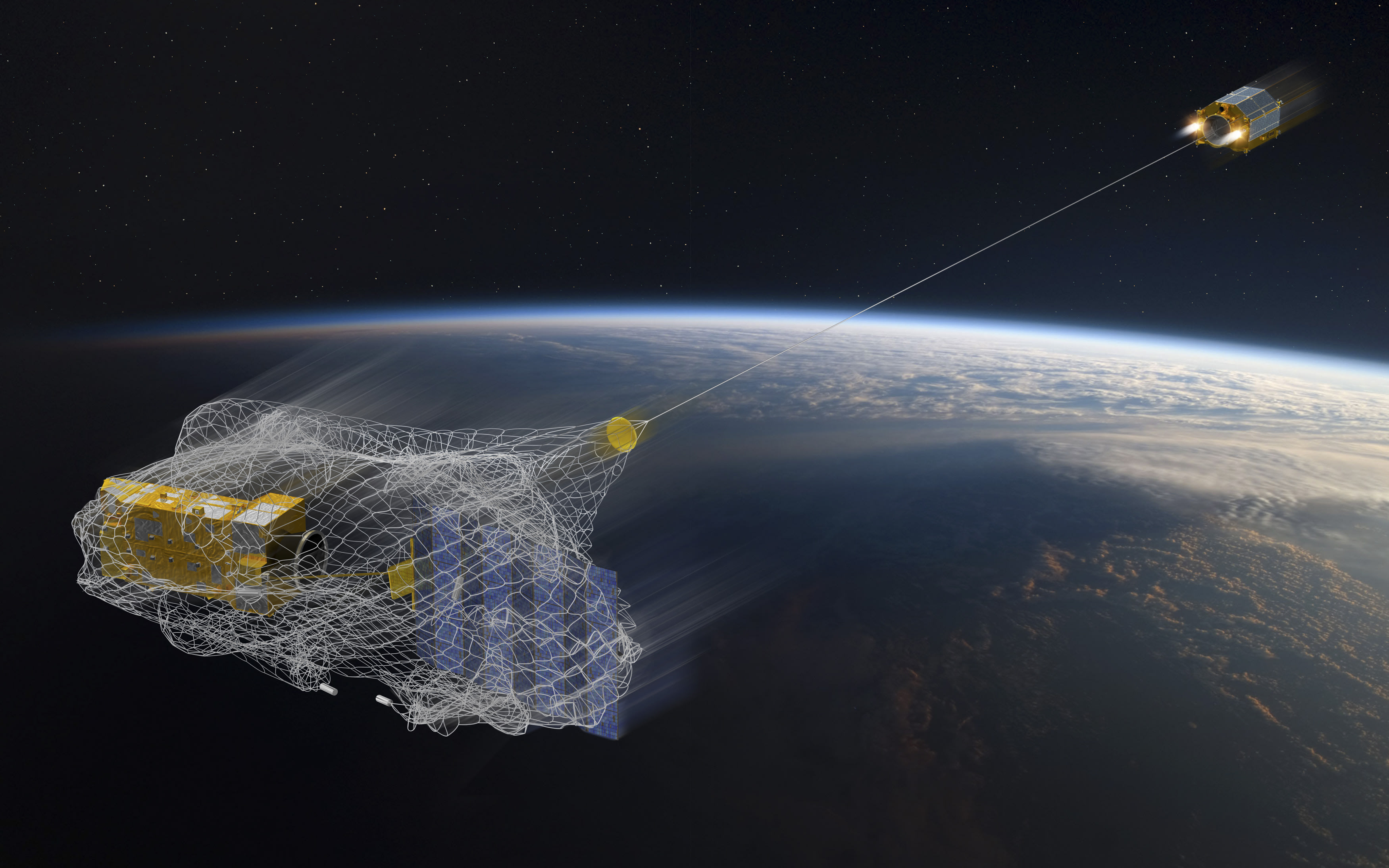 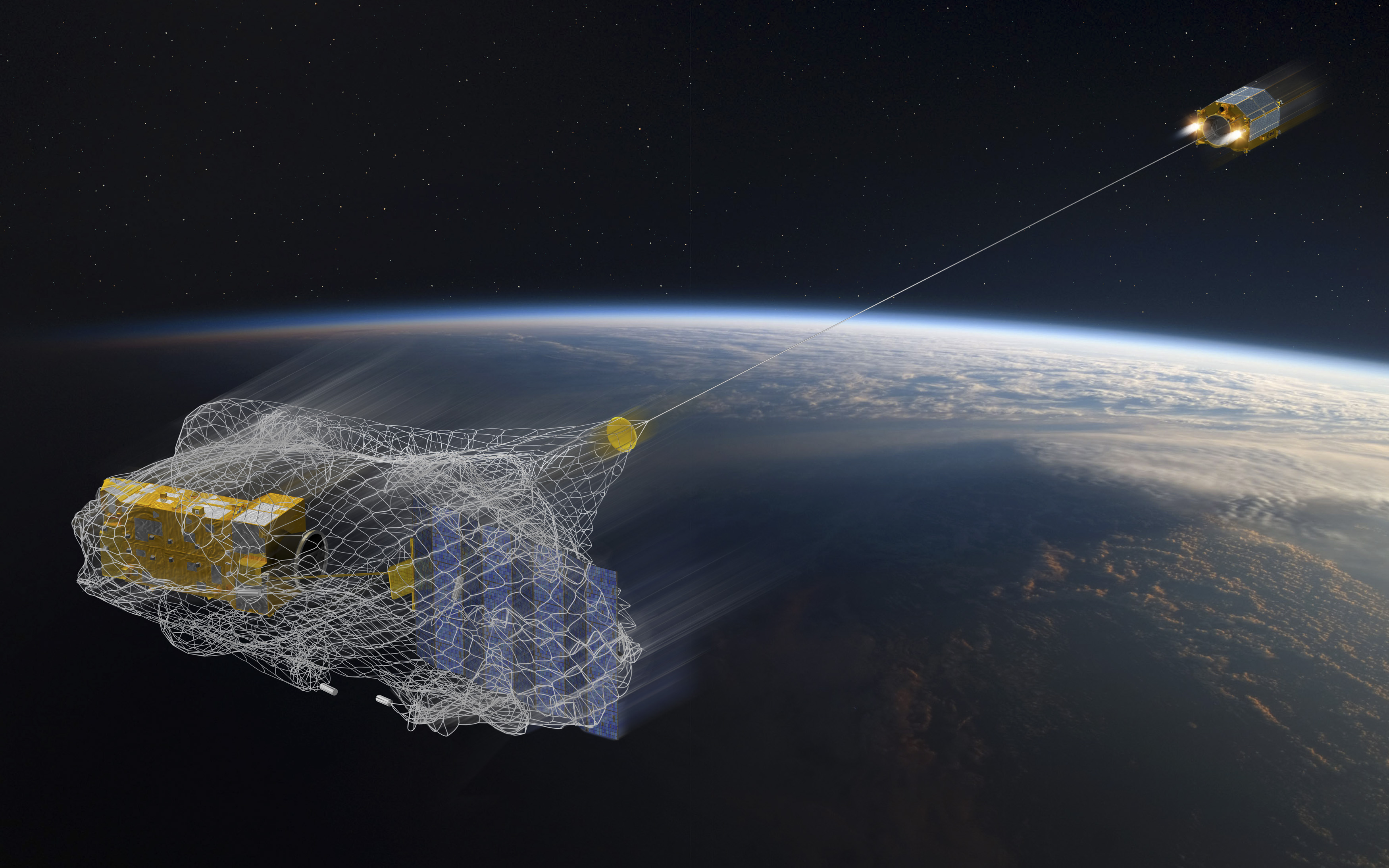 After six years in space, China's first orbital station, the Tiangong-1 (aka the "Heavenly Palace") has finally outlived its operational limits and begun its descent to Earth. It's expected to re-enter the atmosphere in a few months, whereupon a majority of the 9.3-ton station should burn up before reaching the surface. This is how defunct satellites are supposed to be disposed of. Unfortunately, until very recently, that hasn't often been the case.

For the past 50 years, we've been filling Low Earth Orbit with defunct satellites, launch vehicle upper stages and various bits of broken spacecraft (including frozen water, coolant and paint flecks). Most of this comes from failed launches or spent experiments. In 1963, for example, the US military unloaded 480 million needle-size antennas into orbit to see if they'd act as a crude radio-reflector array. The idea was that radio signals from Earth would bounce up into the atmosphere and bounce back down off of them, enabling longer-distance radio service. Though satellite communications have since made this technology obsolete, those antennas are still up there, just floating around waiting to go full-on Gravity with a passing satellite.

By the start of the 21st century, LEO had become increasingly crowded with satellites -- more than 7,000 have been launched since Sputnik first circled the globe -- though only 1,500 of them remain active. That number is expected to swell to more than 18,000 man-made objects in orbit in the coming decades as private industry, in addition to national governments, begins sending up communications and observation satellites. In fact, of the 98 launches that took place worldwide in 2016, nearly half carried private communications satellites.

Today, there are an estimated 20,000 pieces of debris bigger than a softball in Low Earth Orbit, and another 50,000 the size of a marble. We're not sure how much junk smaller than that is in orbit -- it could be on the magnitude of tens of millions -- because we lack the technology to track them from the ground. This trend is sure to cause havoc if we don't start cleaning up after ourselves.

In some ways it already has. In 2007, China destroyed its Fengyun-1C weather satellite with a ballistic missile as a show of force to the international community. Doing so spread more than 3,000 pieces of debris throughout LEO. America's response a few months later, blew a defunct spy satellite to smithereens, though a majority of that debris field reportedly re-entered the atmosphere. Two years later, in 2009, a defunct Russian satellite crashed into an American Iridium satellite, spreading another 2,000 bits of space junk.

"It's a serious, serious challenge," Launchspace founder Marshall Kaplan told Space.com in 2013. "This is not a US problem ... it's everybody's problem. And most of the people that produced the debris, the serious offenders, like Russia, China and the United States, are not going to spend that kind of money. It's just not a good investment.

This cascade of collisions is known as the Kessler Syndrome, named for Donald Kessler, the former head of NASA's space-debris program. He mathematically proved in the 1970s that there is a saturation point of how much stuff we can place into LEO. Once we reach that critical mass, the items in that orbit are sure to set off a massive collision cascade, even if we don't place any additional objects in that orbit. "If we're not at the critical mass, we're pretty close to it," Kessler told The Atlantic in 1998.

But it's not just our satellite communications that are in danger of being destroyed -- all that space trash poses serious threats to manned missions as well. In 1983, a fleck of paint traveling at around 17,000 mph, struck the windshield of the Challenger space shuttle and left a pea-size pit. This happened with such startling regularity (read: literally during every mission) that NASA took to orbiting the shuttle upside down and backward (relative to its direction of travel) so that the rockets rather than the crew cabin would take the brunt of the impacts.

The ISS isn't much better off. That 2009 collision between the Russian and American satellites forced the ISS crew to scramble for safety aboard the Soyuz spacecraft should a piece of debris blast through the station's hull.

Despite the dangers, there's plenty we can do to mitigate the damage that this debris does. The first step is to know what, and how much of it, we're dealing with. The Department of Defense has established the Space Surveillance Network to do just that. The SSN is able to track objects as small as 2 inches across at LEO and as small as 3 feet in geosynchronous orbit -- around 21,000 of them in total.

The system doesn't track each item continuously but rather uses a predictive method that calculates their orbital momentum so ground-based observers can "check in" with individual objects by pointing their telescopes to where and when the item should be overhead. All together, the DoD's array of sensors and telescopes, which are spread from Hawaii to Greenland to the Indian Ocean, observe around 80,000 satellites (and pieces thereof) every day.

Of course, simply knowing where these debris fields are doesn't alleviate the threat that they pose. We've got to come up with a means of inciting that space junk to fall back to the surface. And while nobody has managed to successfully deploy an orbital-debris-reclamation system yet, a number of space agencies are working on everything from magnetized wire lanyards and gigantic nets to "space brooms" and kamikaze robo-grapplers.

In 2012, NASA granted North Carolina-based Star Technology and Research $1.9 million to develop the ElectroDynamic Debris Eliminator (EDDE). This device, upon reaching orbit, would unfurl a 6-mile-long tether that generates an attractive field as it moves through the Earth's magnetic field. When the EDDE encounters a piece of space junk, it captures it in a large net and drops the ensnared garbage into a lower orbit where the thicker atmosphere pulls it out of orbit. This is essentially the same process that JAXA's Kounotori 6 spacecraft was attempting when a technical glitch caused that mission to fail earlier this year.

The European Space Agency has floated a similar idea except that in addition to, or even perhaps instead of, their orbital garbage truck would hunt its quarry using a tethered harpoon. It's part of the ESA's e.Deorbit mission which is scheduled to launch in 2021. The harpoon, which is being developed by Airbus Defense and Space, is just one of the proposed capture methods that will be tried during that mission.

Accurately piercing the hull of a defunct satellite using a space harpoon in microgravity is as technically challenging as it sounds. So rather than try to spear and reel in derelict objects, the startup Swiss Space Systems (S3), has devised a robotic grappler that clamps onto debris and drags it into the atmosphere. Dubbed the Clean Space One project, this 66-pound janitor satellite would be about the size of a breadbox. After being launched from the European Suborbital Reusable Shuttle in 2018, the CSO is tasked with tracking and capturing a nonoperational Swisscube satellite then dragging it back to Earth. The mission is expected to cost around $16 million.

One problem persistent debris-capturing satellites like the ESA's e.Deorbit face is maintaining a steady supply of propellant. You don't want your janitor satellite to become another piece of debris simply because it ran out of power. Texas A&M University is working on a clever solution to that issue with the Space Sweeper with Sling-Sat (4S). This satellite would first capture a piece of debris then whip around, slinging the trash into the atmosphere while pushing itself into the path of its next target. By repeating this process, the 4S should be able to hop from one bit of trash to the next without having to expend an expensive and limited supply of fuel. 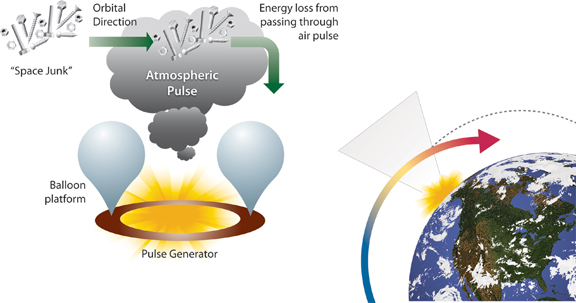 But what if we didn't need to send new robots into orbit to capture the old ones? In 2011, Raytheon BBN Technologies and the University of Michigan teamed up to devise the Space Debris Elimination (SPaDE) system. Rather than rely on satellites, SPaDE would puff concentrated bursts of atmospheric gas into the paths of LEO debris. The added friction from these gasses should be sufficient to slow the debris down enough that it falls back to Earth. Unfortunately, the SPaDE project never got beyond the drawing board.

Then again, why even expend the effort to drag dead satellites into the atmosphere when you can simply repurpose their functional (albeit unpowered) pieces? That's what DARPA hopes to do with its Phoenix project. This system would rely on a new class of microsatellites, dubbed "satlets," which would seek out and affix themselves to dead satellites in geosynchronous orbit.

Each satlet would restore an essential satellite function (i.e., power, movement control or sensors) and share data, power and thermal-management capabilities among themselves. By connecting these devices in different combinations, deactivated satellites could be resurrected and their operational lifespans drastically increased. DARPA expects to launch a demonstrator mission around 2020 and commercialize the technology shortly thereafter.

This mission could prove valuable for both the military and the commercial space industry, DARPA program Manager Gordon Roesler told Via Satellite in 2015, wherein a civilian firm would own and operate the satellites themselves and the military "could just pay a commercial operator for the service."

Despite the myriad capture options that these various systems offer, they all share one aspect in common: Not one of them is ready to be put into service. It's not economically viable at this point to send up robots like the d.Deorbit to dispose of a single piece of space junk, and likely won't be for years to come. What's more, the government may soon face a legal minefield in its cleanup efforts as more and more privately-owned satellites come to occupy and operate in LEO.

"Removal from orbit, collision avoidance, satellite servicing and repair, satellite recycling in orbit, debris-storage locations, change to using a 'stable plane' at higher altitudes especially in Geosynchronous Earth Orbit (GEO) ... are all possibilities," Donald Kessler told Space.com in 2013. "Some are mutually exclusive and may not be appropriate at all altitudes, while others could combine to be more effective.

"I believe it is time that the international community takes a serious look at the future of space operations," he concluded. "There's need to begin a process to answer these questions and determine which path will most effectively provide a sustainable environment for spacecraft in Earth orbit."

In this article: BBN Technologies, China, CubeSat, Day of Defeat: Source, Earth, European Space Agency, Gravity, Hawaii, International Space Station, Kessler syndrome, Low Earth orbit, NASA, robots, Russia, Soyuz, space, Space Shuttle Challenger, Sputnik 1, Texas AM, Tiangong 1, TL18NASA, tomorrow, United States Space Surveillance Network, University of Michigan
All products recommended by Engadget are selected by our editorial team, independent of our parent company. Some of our stories include affiliate links. If you buy something through one of these links, we may earn an affiliate commission.