Most electric vehicle discussions revolve around passenger cars. Sometimes buses get thrown into the mix. We're laser-focused on how people will get from point A to point B and sometimes forget that our streets are also teeming with delivery trucks and vans. Daimler hasn't forgotten and neither has its light-truck brand Fuso.

After years of testing, Fuso (it'll be using eFuso for its electric vehicles) is putting its eCanter truck on the roads of Japan and the United States, delivering for 7-Eleven and UPS, respectively. Fifty of the trucks will land in North America by the end of 2017.

During an event at Mercedes-Benz's research and development facility in Silicon Valley, (Daimler is the parent company of Mercedes and Fuso), I was able to take the new eCanter out for a spin. For the driver in the cab, it's not much different from the diesel and gas vehicles they're used to steering. 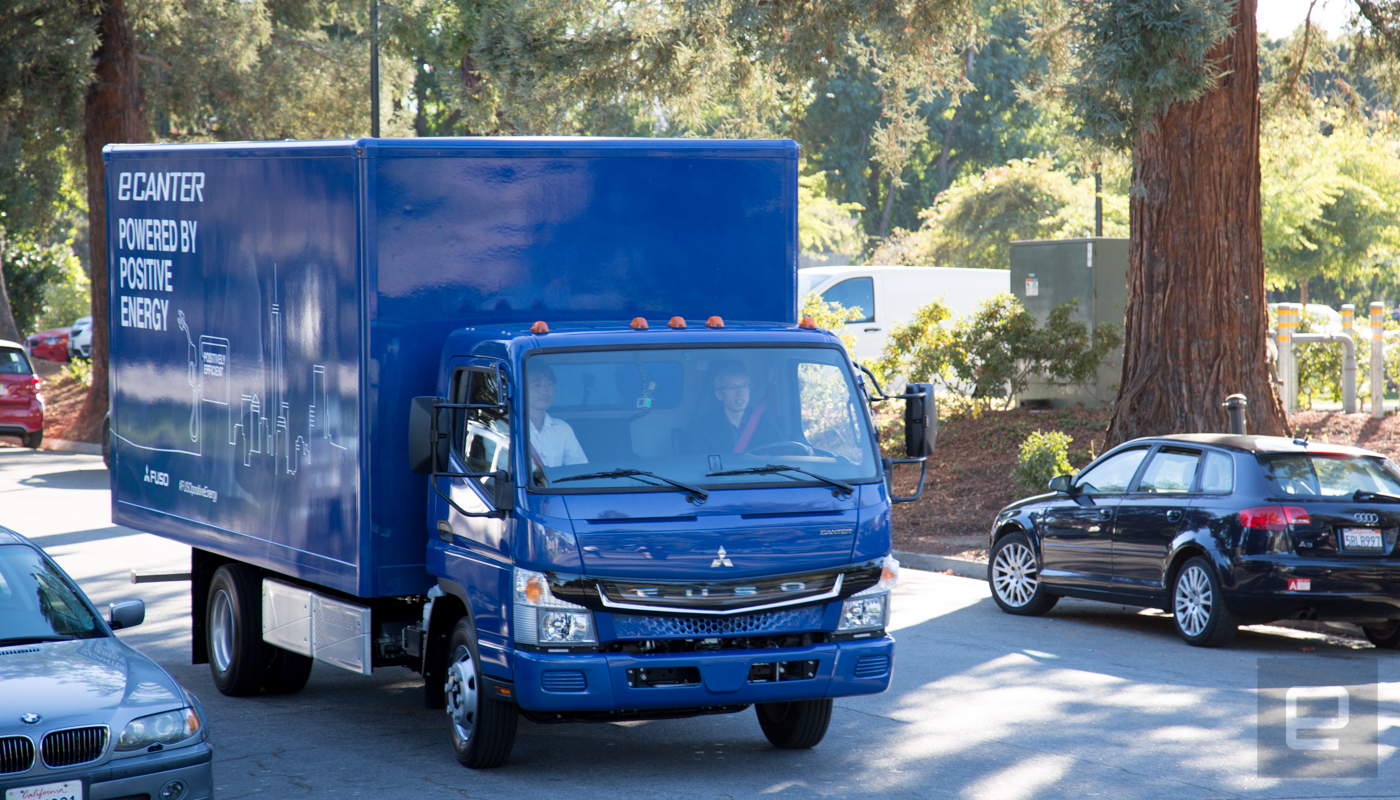 But for everyone else, the eCanter is almost completely silent and doesn't spew CO2 into the air while hauling our Amazon purchases around town. Both of those, along with the cost savings of switching from oil-based fuels to electric, are the big selling points of the eCanter.

Most delivery trucks (including the traditional Canter) use diesel and make quite a bit of racket while the engine runs. It's why you can tell when the UPS or FedEx truck is out front, but not the pizza delivery person. Anytime you can reduce noise in a work environment, not only are you making things better for employees but also, in this instance, reducing noise pollution on our already hectic streets.

As for environmental pollution, Fuso says that driving the eCanter instead of the regular Canter prevents 16 tons of pollution from the air per year. If you think about how many trucks like this you see roaming around your city every day, that's an incredible amount of CO2 kept from the air.

But companies need more than quiet trucks and good environmental vibes to replace their current fleets with battery-powered ones. Fuso said that these new trucks could generate a saving of $19,000 after five years of use compared to their predecessors. The trucks will also be offered with the option for lessees to upgrade the batteries when improvements become available.

And finally, by using a companion system, companies can track their trucks' energy usage in far greater detail than they can with their diesel counterparts, including staggering how much and at what times the vehicle needs charging. This can be pretty often if the truck strays too far from its distribution center. 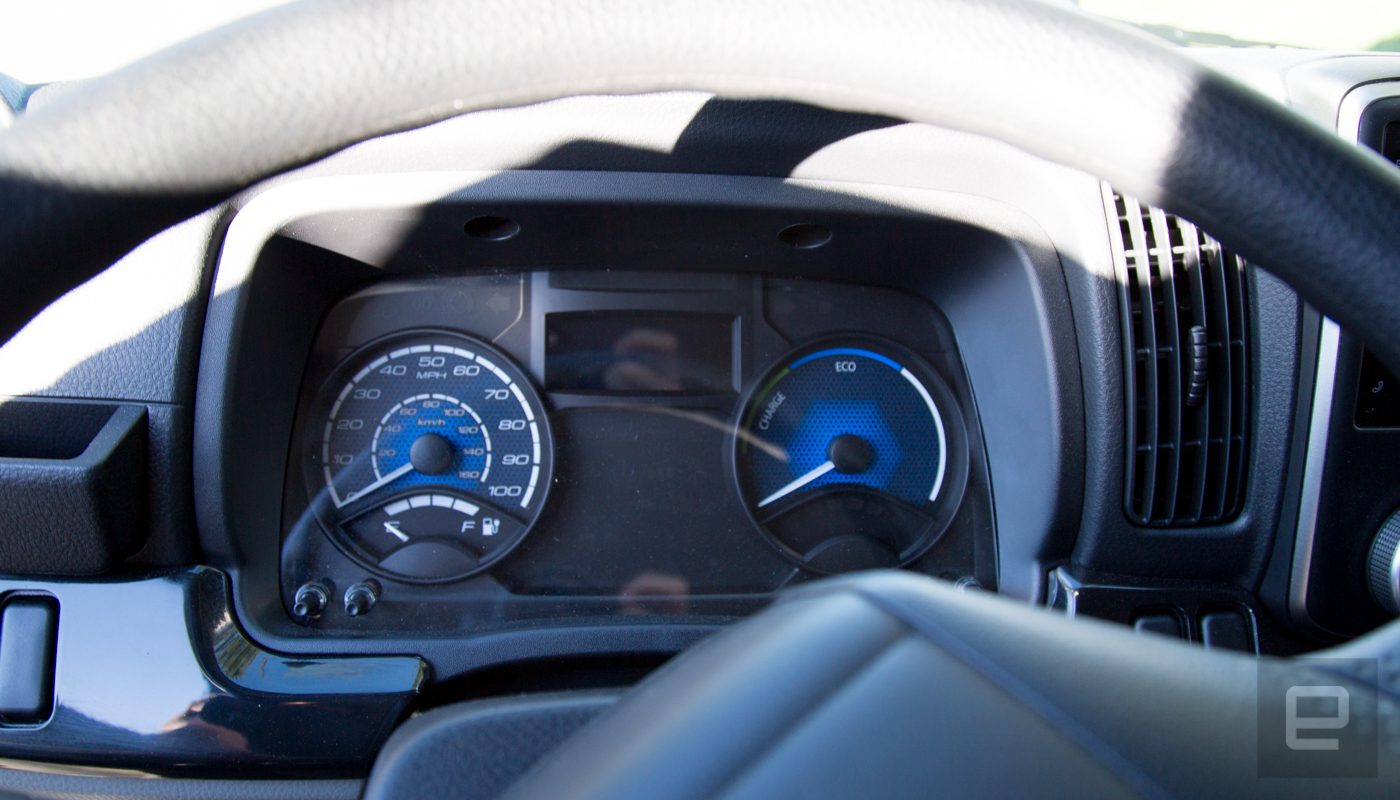 The eCanter has a range of 60 to 80 miles based on the terrain and how much of a load it's carrying. The truck is rated for 9,000 pounds of cargo. Recharging the vehicle's six battery packs can take as long as eight hours using a typical level 2 charger, but with a DC fast-charger it can get to 80 percent in about an hour. This means a driver could replenish the charge during a lunch break if a fast-charger is available. A full charge will take up to two hours.

These specs make the truck perfect for dense areas like San Francisco, Chicago and New York, but for cities, like Los Angeles, that are basically hundreds of miles of sprawl, the eCanter probably won't be replacing vehicles that needed to cover all those miles in a day. For those routes under the century mark, the eCanter looks to be a solid performer, based on my time in the cab of the truck.

The silent truck also displayed the characteristics found on other electric vehicles. It has plenty of torque right off the line and that power is available at almost any speed. Driving it as easy as driving any truck with an automatic transmission: You just point and go. For drivers that might not be fans of change, the only adaptation they'll have to make is looking at a battery gauge instead of a fuel one. 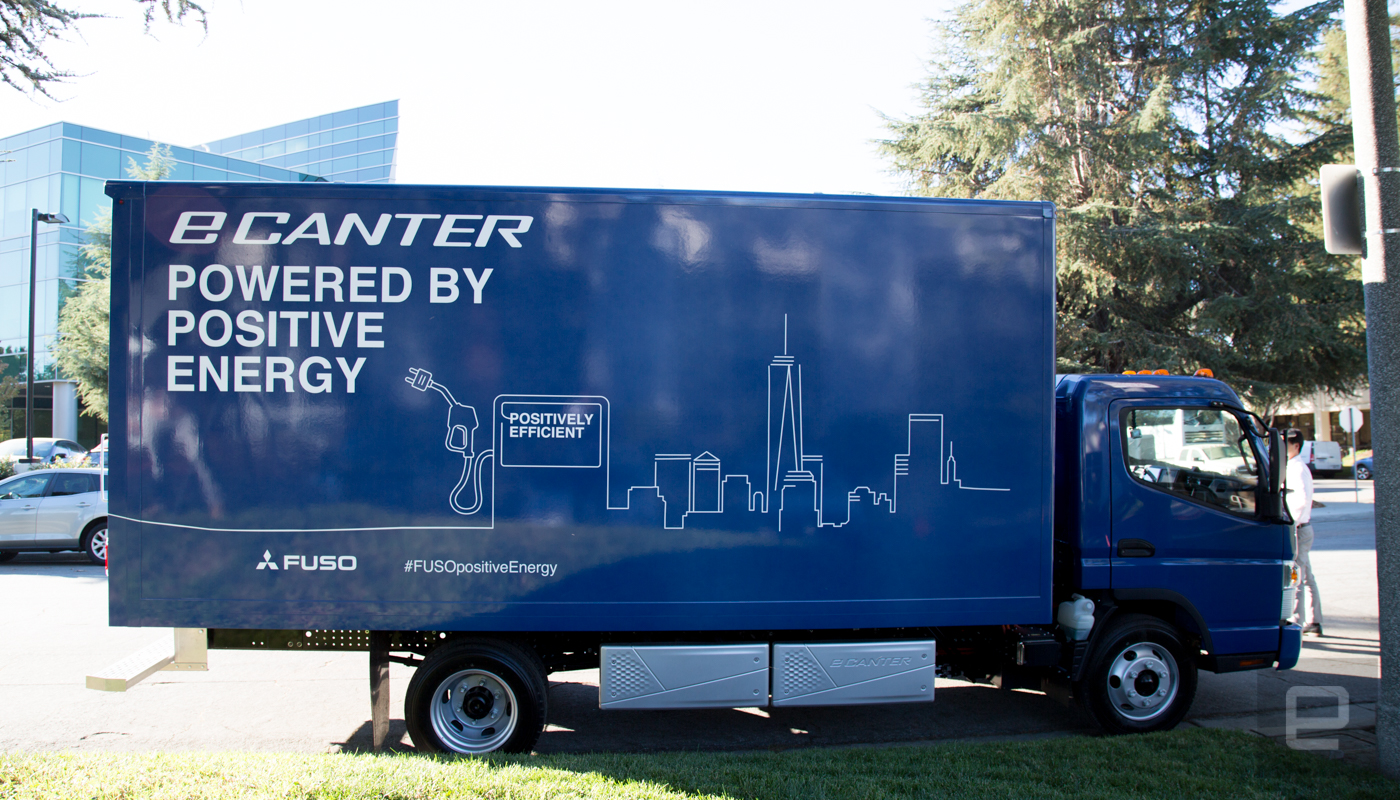 Frankly, it doesn't matter if companies or drivers want to switch to electric. The UK and France want to ban the sale of gas-powered cars by 2040 and cities like Paris are banning all gas-powered cars in the future. At some point, if you want to deliver packages, companies will need electric trucks, and Daimler's eFuso eCanter will be right there waiting for them.

In this article: business, daimler, ecanter, efuso, electriccar, electrictruck, fuso, gadgetry, gadgets, gear, green, hands-on, mercedes, mercedesbenz, transportation
All products recommended by Engadget are selected by our editorial team, independent of our parent company. Some of our stories include affiliate links. If you buy something through one of these links, we may earn an affiliate commission.