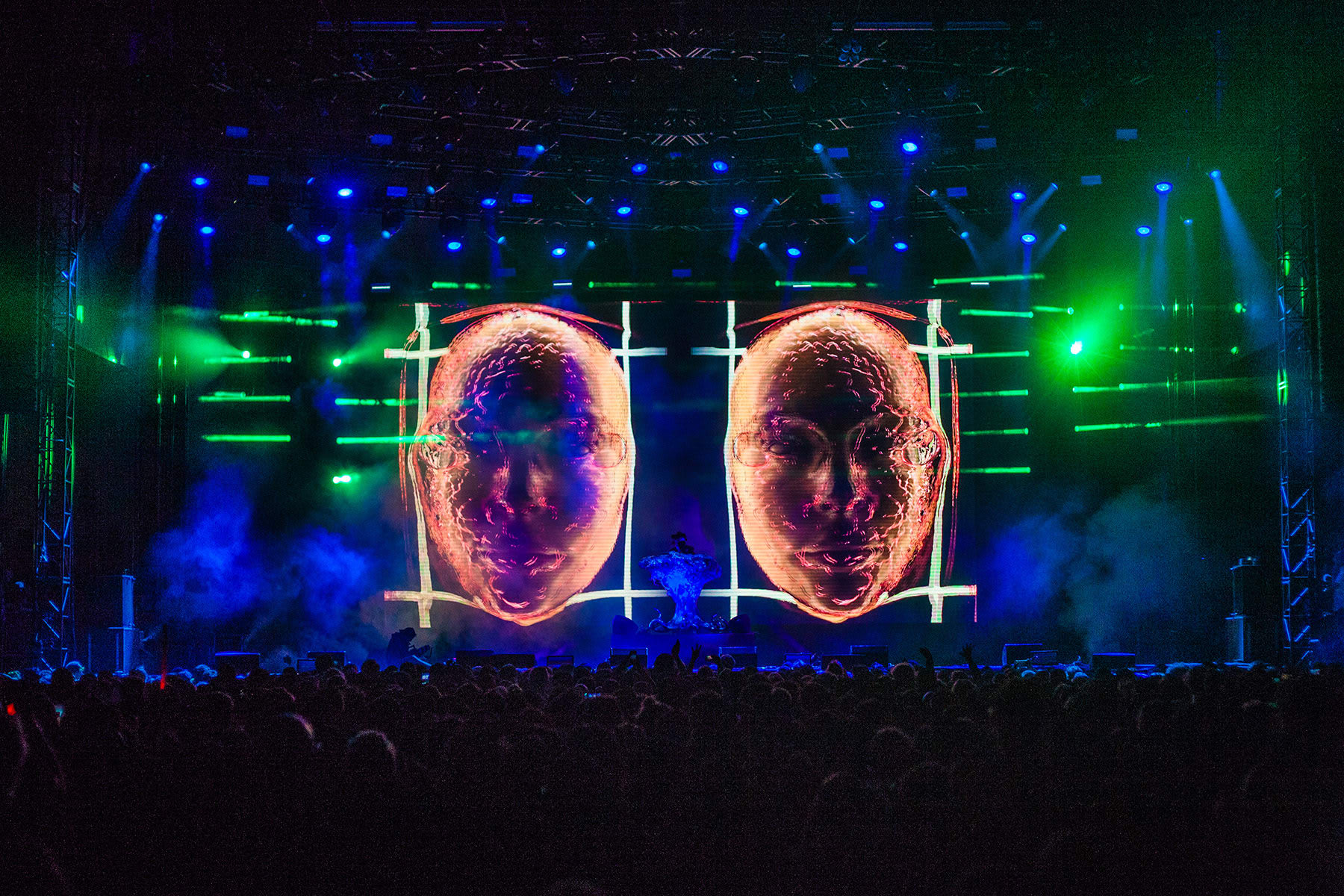 Backstage at the concert venue Brooklyn Steel in New York, the artist Flying Lotus was discussing his persistent desire to create experiences so new that they were inconceivable to an audience before the show.

"I want people to be able to just be like, 'Wow, that exists? Wow, this is happening? This is possible?'" said the producer and musician, whose name is Steven Ellison. "I want people to remember magical feelings, like being enchanted and being mesmerized and just having a new experience. That is what I'm always chasing after."

In following this idea, the jazz, hip hop and electronic music artist has made a conceptual album about death, performed at a Hollywood cemetery and made a film about -- literally -- shit. His latest experiment, however, is in 3D: a 28-stop tour where audiences put on glasses to see an abstract technological spectacle surround them as he plays.

Dubbed the "electronic Jimi Hendrix," Ellison has worked with Herbie Hancock as well as Kendrick Lamar, and is the great nephew of Alice and John Coltrane. But he is also a trained filmmaker and says that's where his heart is. "I've always wanted my shows to feel more cinematic because that's how I enjoy my music," he said. "I love this idea that people, when I look out into the crowd, it looks like they're going to the movies."

The problem with 3D, however, is that eight years after the release of James Cameron's Avatar, the technology falls squarely in the realm of gimmick. The 3D box office is down to its lowest point since 2009, and Greg Foster, the CEO of Imax Entertainment, has said that 2D film demand is beating 3D in North America. Most cinema 3D glasses create a darker, blurrier image, and require looking at a screen in a set position.

"3D has gotten a bit of a bad name due to a lot of really poor 3D movies that are not that great to look at," said Ryan Pardeiro, chief operating officer at 3D Live, the company behind the hardware at Ellison's show, and who is also a co-producer.

3D Live touts its technology as viewable from 120 to 140 degree angles, meaning the holographs looks good from around a concert hall. The display -- a wall of screens behind Ellison on stage -- are LEDs, not projection-based, meaning a brighter screen. Pardeiro speaks of the technology as a kind of shared augmented reality: combining virtual and physical elements within a venue to immerse the audience in an extension of Ellison's vision.

However, even if you exceed your audience's imagination -- as Ellison wants to do -- that "wow" moment then becomes the new normal. To keep people entertained, you have to raise the bar again and again. 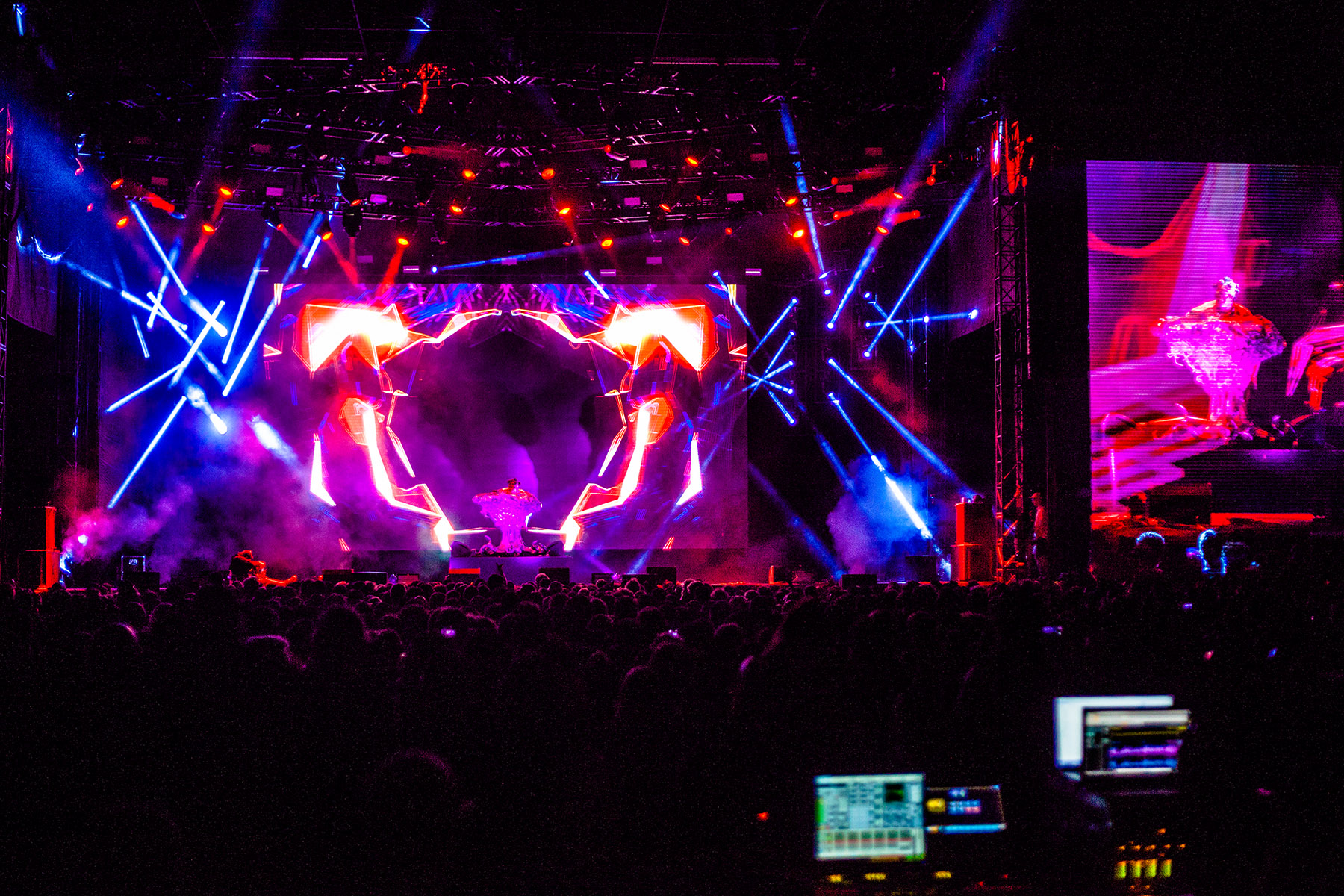 At Flying Lotus in 3D, the job of the VJs and 3D artists is essentially to externalize Ellison's avant-garde mind. Strangeloop (real name David Wexler) and Timeboy (aka John King) co-produced the show and operate the live visuals. Wexler described the overarching aesthetic as "dirty and vibey," the feeling of entering "Lotus' universe." When asked what that meant, their responses oscillate between whimsical and terrifying.

"He has a very playful sense of humor," said King.

"Filled with some humor, some horror, some irreverence," said Wexler.

"Pushing the boundaries of comfortability sometimes," concluded King. "It's definitely one happy fucked up family, but in the artistic sense, I personally love to go there too and test the senses, test perceptions."

About 60 feet in front of the stage, blending in with the sound and lighting technicians, the two VJs are set up with MacBook Pros. With 3D Live, they created a palette of some 400 3D animations, controlled through Resolume Arena software.

"I love the fact that it can go wrong at any moment. We're all in danger, creatively."

Wexler plays cinematic 3D clips, essentially steering the visual theme, with his laptop's keyboard. King has the venue's strobe lights mapped onto a Akai MPK MIDI keyboard. He uses the keyboard controller as well as a Novation Launchpad -- a grid of illuminated buttons that electronic musicians typically use to play musical samples and construct beats-- to trigger individual rhythmic elements within a 3D animation. King and Wexler are playing the lights and 3D animations as if they were instruments. There is no set list; the whole performance is improvised both musically and visually, making each show different. Ellison can't even see what animations are going on behind him.

"I don't like to rehearse, and I don't like practicing because it never really translates," said Ellison, showing his jazz roots. "I love the fact that it can go wrong at any moment. We're all in danger, creatively."

The one-hour show itself -- few breaks for chitchat, no encore -- is a jam session between audio and visual realms, with all three artists trying to communicate with each other through sound and light, anticipating where the other is going next.

The sheer spectacle of it is powerful at times, and the audience whoops with every piece of virtual detritus that appears to fly over them. Those moments, like in certain 3D movies, can feel like a breaking of the fourth wall, a holograph that bridges the physical space between performer and audience. Objects appear to surround Ellison: giant jellyfish, human heads that melt like pink modeling clay in a microwave, or a Star Destroyer-like ship that sails above the heads of the crowd. Plumes of virtual smoke meld with a real-life smoke machine, blending the audience's idea of what's real and fake.

"Having that extra layer of propulsion and depth really enhances that visceral feel," said Tim Saccenti, a longtime photographer and music video director who's collaborated with Ellison, and attended the show on a different night. "It's so overwhelming that you're almost depersonalized."

Yet it's the cohesion between the visuals, lights and music that keeps the audience engaged. Strobes might match a bass drum before going off on a rhythm of their own, while the 3D at times created an ethereal, infinite swirl of stars or fractal neon patterns, like a visualizer receding deep into what looks like a tunnel behind the DJing and rapping Ellison. Whether in hip hop or comedy, improvised performances make you trail artists as you hurtle through unfamiliar terrain together, not knowing whether they'll sail or swoop next. The fact that this trip involves a holographic medium foreign to the crowd added to the mystery of where it would lead, keeping them in the moment.

"Halfway through the show, people forget that it's 3D."

When the show works, it's because of this back-and-forth between 3D as a dazzling wave of an individual moment, and as a refined, responsive interplay between visuals and audio for the crowd's attention to surf along.

"You need to have some of that spectacle, I think, just to get people into the headspace of what is possible and hopefully choose the right moments where it artistically makes sense to go there," said Wexler.

"Halfway through the show, people forget that it's 3D," King said. "I think you have to remember to let that feeling come in and out. Get them immersed and then pull back a little bit, so that they're not just adjusted to the fact that it's 3D and then boom, okay, it's a 3D gimmick." 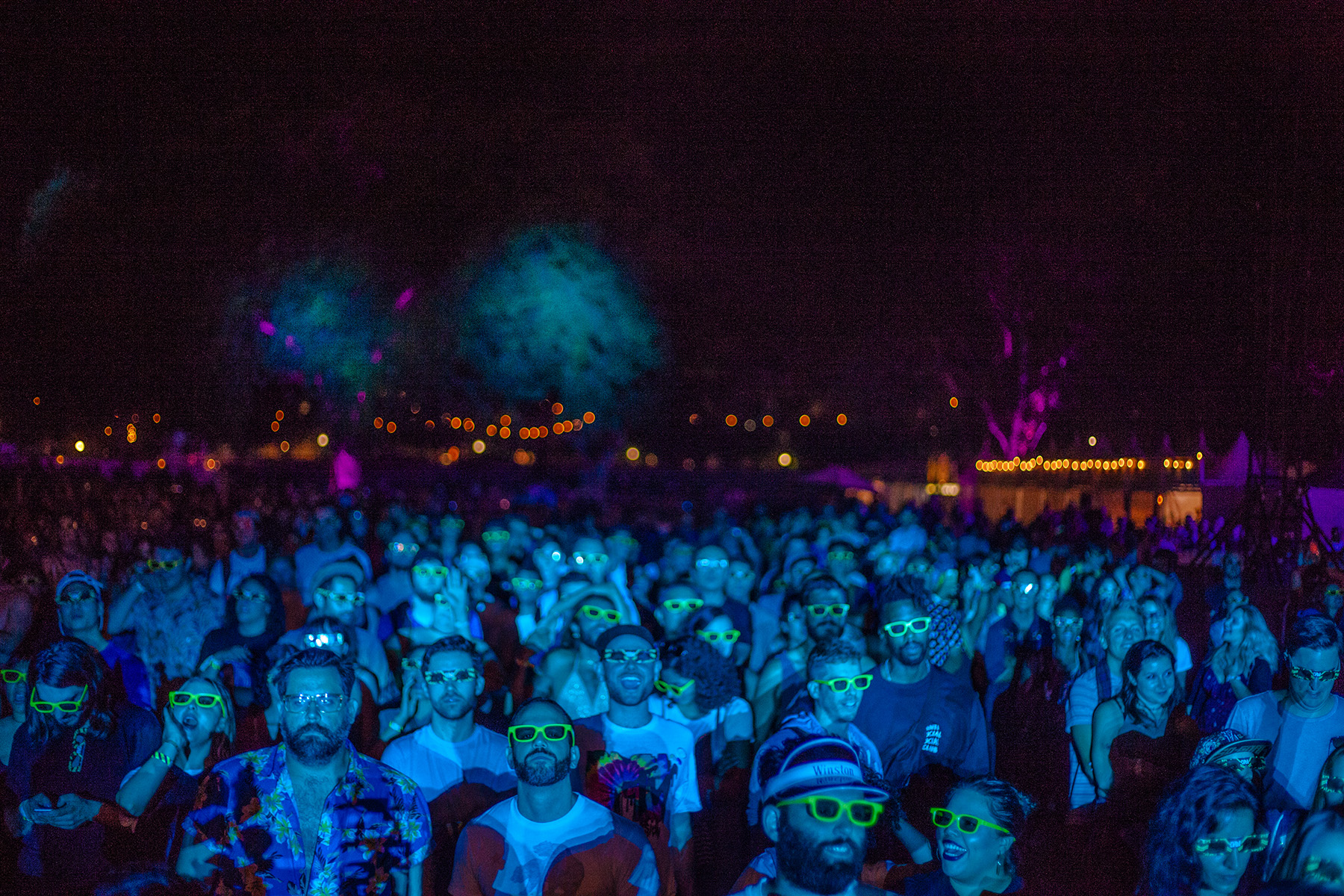 “Dude, if you pay money to come see me, just let's just turn that shit off for like a little bit. Let's just zone out together for like an hour. How crazy is that?”
Steven Ellison

In the middle of Ellison's set, from a balcony, I saw the flicker of about a half dozen phones in the crowd -- fewer than I'd seen at any concert in years. This was another way the concert's technology kept people in the moment: a 3D concert doesn't film well on smartphones.

"I just love any kind of possibility of being there, together," Ellison said. "Dude, if you pay money to come see me, just let's just turn that shit off for like a little bit. Let's just zone out together for like an hour. How crazy is that? One hour without touching your utility belt, Batman. Let's just fucking watch a show together and trip out, have some fun and then you can tweet about it all night."

With the house lights up and beer cans being swept into small mounds, Ellison was in a gregarious mood, pouring shots of Patron in red solo cups for crew, performers and hangers-on.

"Usually, in this moment, if I had a shitty night or even a so-so night, I would probably be way more depressed," he said. "But I actually feel like I did my part tonight. I don't know what the 3D did. I did what I do and I felt content with that. If they don't like it I'm sorry, but that's what I got, you know what I mean? That's my bag of tricks."

In this article: 3d, 3dlive, art, concert, design, entertainment, flyinglotus, longread, music, stevenellison
All products recommended by Engadget are selected by our editorial team, independent of our parent company. Some of our stories include affiliate links. If you buy something through one of these links, we may earn an affiliate commission.