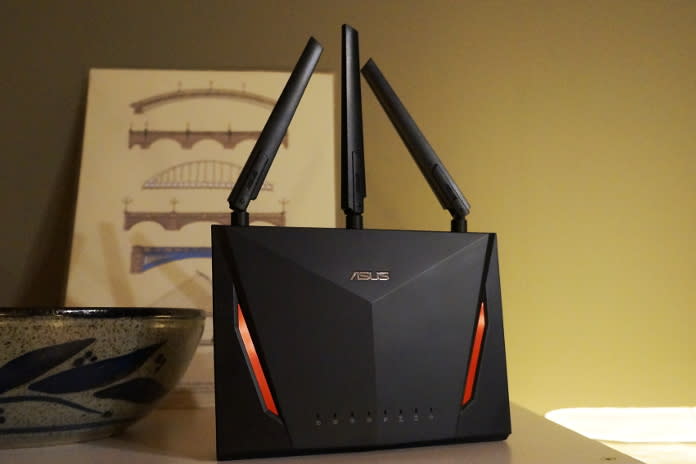 Getting WiFi to every corner of your home is made much easier these days with a mesh network, which uses a specialized router and individual nodes that can configure themselves. Companies like Netgear, Samsung and ASUS all have kits of varying price that can help you make one in your own home, but you generally have to purchase a whole new set of devices to make it work. Now, ASUS is offering AiMesh, a system that uses your current ASUS routers to create a mesh network without pricey extra hardware. Since you're using routers that you already own to create a mesh network, you can decide which one is the primary and which will act as nodes. You simply find the router with the best capabilities, drop it in a central location, then use the built-in software to configure the network. AiMesh is available as a free firmware update, which adds support for the protocol to your router. Currently, the ASUS RT-AC68U, RT-AC86U, RT-AC88U and the RT-AC3100 routers can handle the update, with a couple more in beta testing. The company plans to roll out updates for even more of its routers later this year, including it's new mesh-centric Lyra system.

In this article: aimesh, asus, gear, home, internet, mesh, network, nodes, routers, wifi, wifimesh
All products recommended by Engadget are selected by our editorial team, independent of our parent company. Some of our stories include affiliate links. If you buy something through one of these links, we may earn an affiliate commission.