It's designed to be "unapologetically feminine."
C. Low|01.09.18
@cherlynnlow

Kate Spade, known for its colorful, bubble-gum aesthetic that draws girls from all over the world to its purses and accessories, has made its first touchscreen smartwatch. The Android Wear device was unveiled at CES 2018, and it doesn't have a name other than "Kate Spade scallop touchscreen." It was designed to fit in with the rest of the brand's "unapologetically feminine" look, according to CEO Mary Beech, and it's one of the few smartwatches ever to specifically target women's wrists, and do so in an attractive way.

Pictures don't quite convey how this watch looks in real life -- the case isn't as chunky as it appears. And that's part of the reason it took Kate Spade so long to release its first touchscreen wearable. "We needed to wait till the tech got to the point where we could have that slim case that we knew our customer would want," Beech told Engadget in an interview.

The 1.19-inch watch face is surrounded by scalloped edging, which you'll find on some other Kate Spade products. A Spade logo is etched onto the knob on the right of the case. The device also comes with three animated watch faces that fans will find familiar, like the "New York minute" cab graphic and the daisy with falling petals. Those features alone don't make the watch feminine, of course. It's the narrow 16mm band and relatively small face that make it more suited for petite wrists. 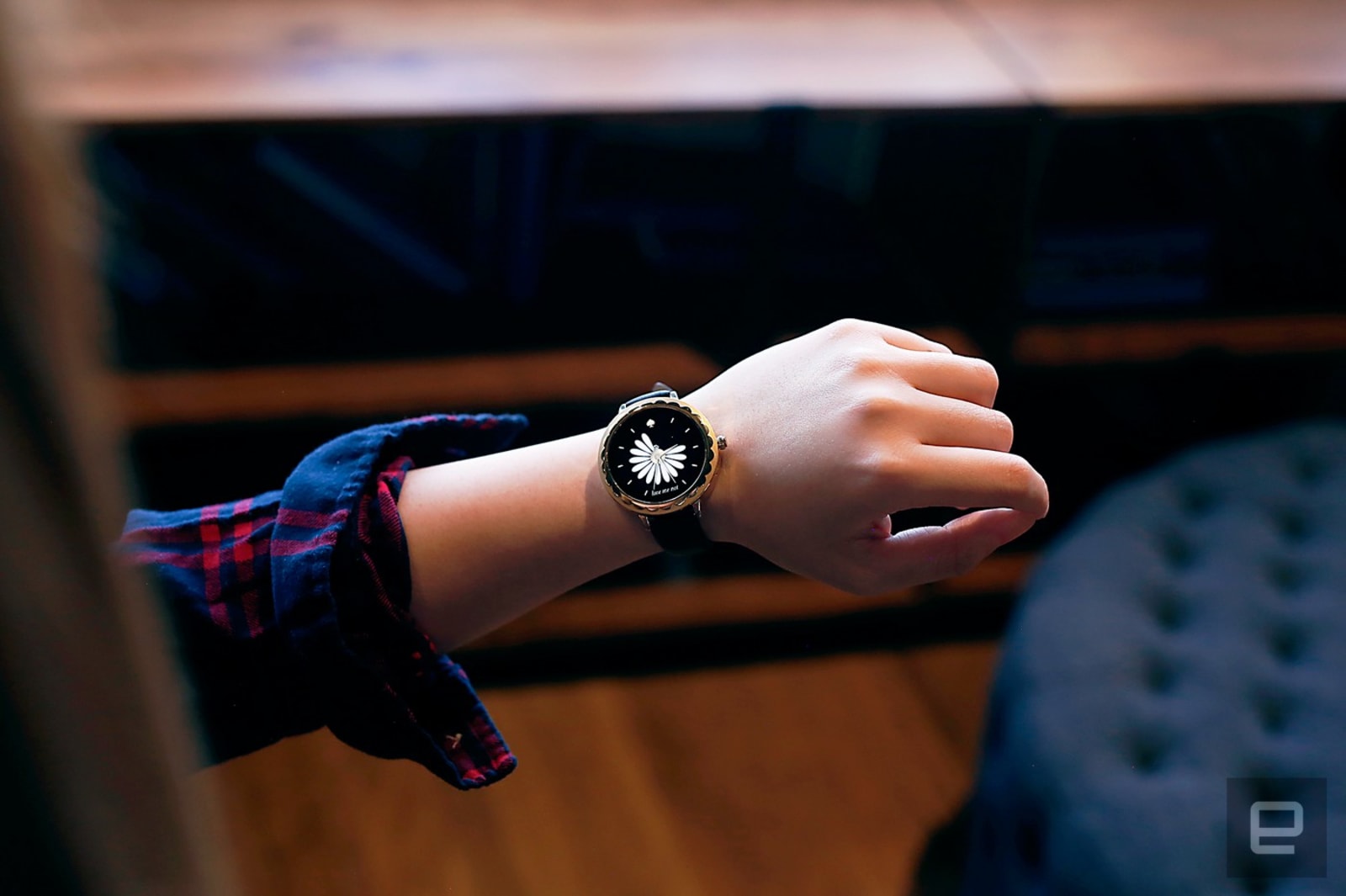 Like other smartwatches made by Fossil Group, the Kate Spade watch has an app that lets you customize the watch face. But instead of picking the colors of the dials, hands and numbers, the Kate Spade "choose your look" app asks questions about your outfit, jewelry colors and the time of day to generate a face that will "perfectly complement" what you're wearing.

Also similar to other Android Wear 2.0 devices from Fossil Group are the watch's fitness-tracking features. which are pretty basic. It doesn't have a heart rate sensor, so it will just track your steps, calories and distance traveled via Google Fit. You can also long-press the knob to summon Google Assistant and stream music over Bluetooth to your headphones. You know, like most other Android Wear 2 watches.

For a brand that's known for its bright colors and bold patterns, Kate Spade's first touchscreen smartwatch lacks the company's distinct palette. When the watch launches come Feb. 5th, only black and nude leather straps will be available for $295, along with a rose-gold metal bracelet option for $325. That's not to say more-colorful versions aren't coming in the future, of course. For now what physically stands out about Kate Spade's new watch is its narrow strap and scalloped detail. At least it's not another watch "designed by men for men, with some glitter thrown on it," as Beech described.

Skagen also unveiled its first touchscreen smartwatch at CES, called the Falster, and it's also an attractive option. It features color-matched lugs and a metallic strap, making for a cleaner, more elegant aesthetic. Like the Kate Spade version, Skagen's device runs Android Wear 2.0, has customizable watch faces and can track basic fitness metrics.

Although smartwatches haven't been well-received since their inception, fashion brands clearly still aren't giving up on the category. Like Beech said, "Our customer is going to tell us where the marketplace is going." We'll surely see more refinements in the category and, hopefully, get a long-lasting watch that's as beautiful as it is useful. One day.