All the rumors, new devices and incoming trends we're expecting to see in Vegas.

It's January, which means that Las Vegas, or the bit that pretends not to be Las Vegas for tax reasons, will play host to CES. The Consumer Electronics Show is the event that kicks off the technology world's annual calendar, and 2018 will see thousands of companies descend upon Nevada to show off their wares. Many will claim to have the solution to whatever problem you may have, but we'll be on the ground to peer through their flashy promises.

If last year's CES had a theme, then it was an attempt to broaden its horizons beyond smartphones, tablets and TVs. Technology companies have mined every last drop of good ideas from the traditional gadget world, which is why many chose to try something new. Our Best of CES winners from last year included a smart bra-style breast pump, a self-balancing motorcycle and smart tech that will help farmers. CES will set the tone for the next year in technology, so while we make our way there, here's a quick run-through of all the things we're likely to find in the desert.

There won't be millions of laptops launched at CES, but you can expect plenty of talk about the devices that are coming. The theme is likely to be low-power, super-efficient devices that can truly be described as having an "all-day battery" without lots of caveats. In December, HP and ASUS launched Snapdragon-powered Windows 10S laptops that can even be upgraded to the full-fat version of Windows. These devices will also come packing always-connected LTE modems, as the worlds of smartphones and laptops start becoming one. Intel, which is feeling the pinch from ARM chip makers like Qualcomm, will probably have something of its own to show off, even if it is just a concept device.

If you're looking for the next blockbuster phone you want to buy, then CES probably isn't the show for you, since we've got Mobile World Congress coming up shortly afterward. For a brief second, there was a rumor that Samsung would shock everyone by announcing the Galaxy S9 at the show, but that was rapidly quashed. But what you can expect to see are plenty of budget handsets that will offer up features from last year's flagships at cheaper prices. Huawei's sub-brand Honor will be doing something at the show, and it's plausible that ZTE will do the same. Oh, and we'll keep our eyes peeled on Sony's corner because it's always turned up to CES with something nice in its back pocket. 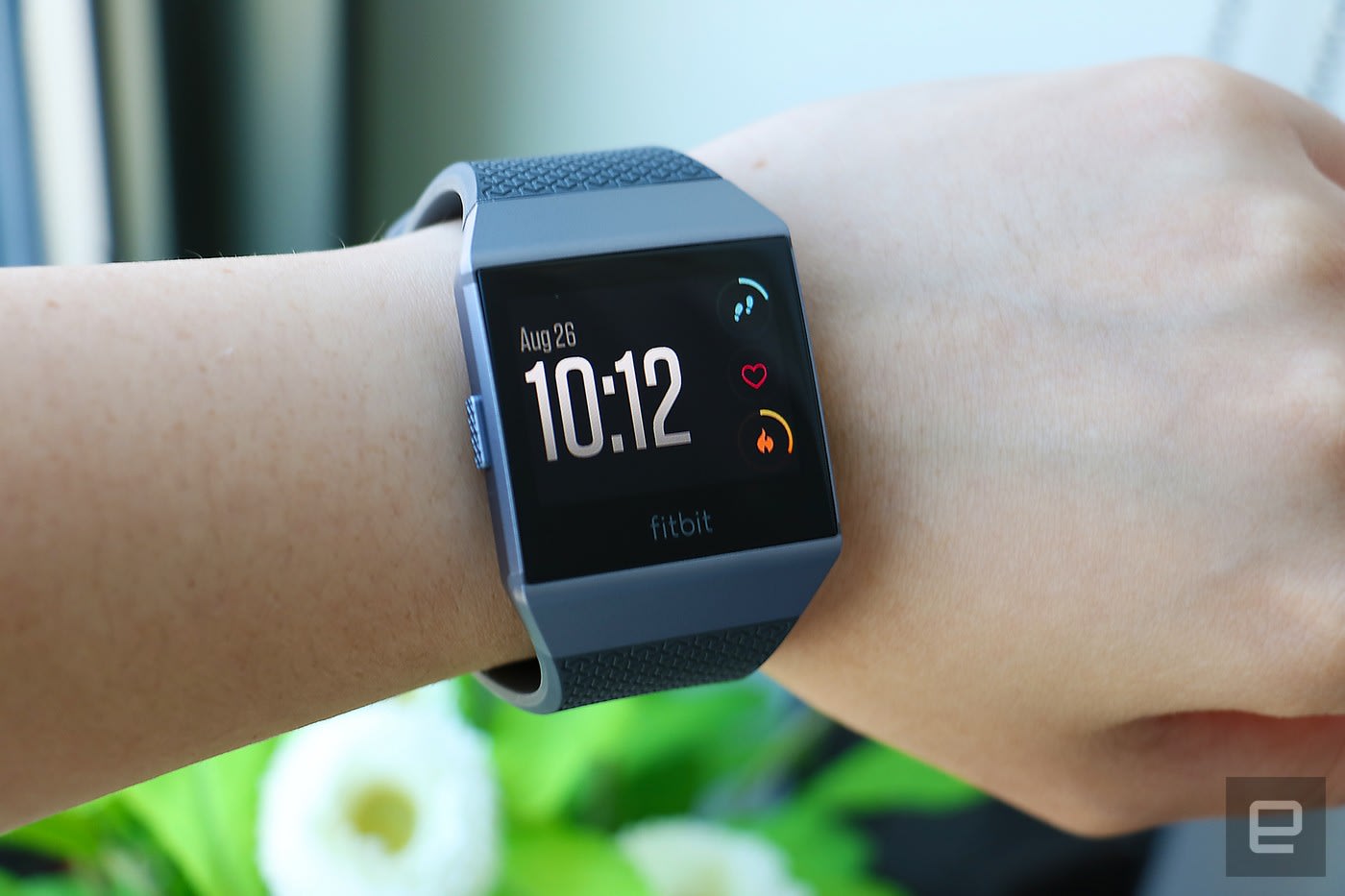 After a disastrous 2017, it's looking to be a quieter year for wearables since the industry has failed to convince mainstream users to buy smartphones for their wrists. It's possible that we'll see Android Wear devices from more fashion brands, especially since the Fossil Group produces timepieces for so many top-tier houses. If you're looking for big innovations in the smartwatch world, then you should probably gear yourself up for some disappointment.

Instead, it's entirely possible that we'll see wearable companies branch out further into the broader health and fitness world. Withings / Nokia Health already has a whole ecosystem products, from a sleep sensor, weighing scale and wireless thermostat to a smart hairbrush. Don't be surprised if other companies try and move in a similar direction in 2018, or even pivot toward the serious healthcare market.

Since the consumer-level watch world has slowed, many companies -- including Apple and Fitbit -- are looking to more serious projects. Both companies are running studies to examine if fitness trackers can detect heart conditions, and we've already seen others building blood glucose monitoring devices. We're on the lookout this year for plenty more of these, which will likely wind up being bought via your HMO. 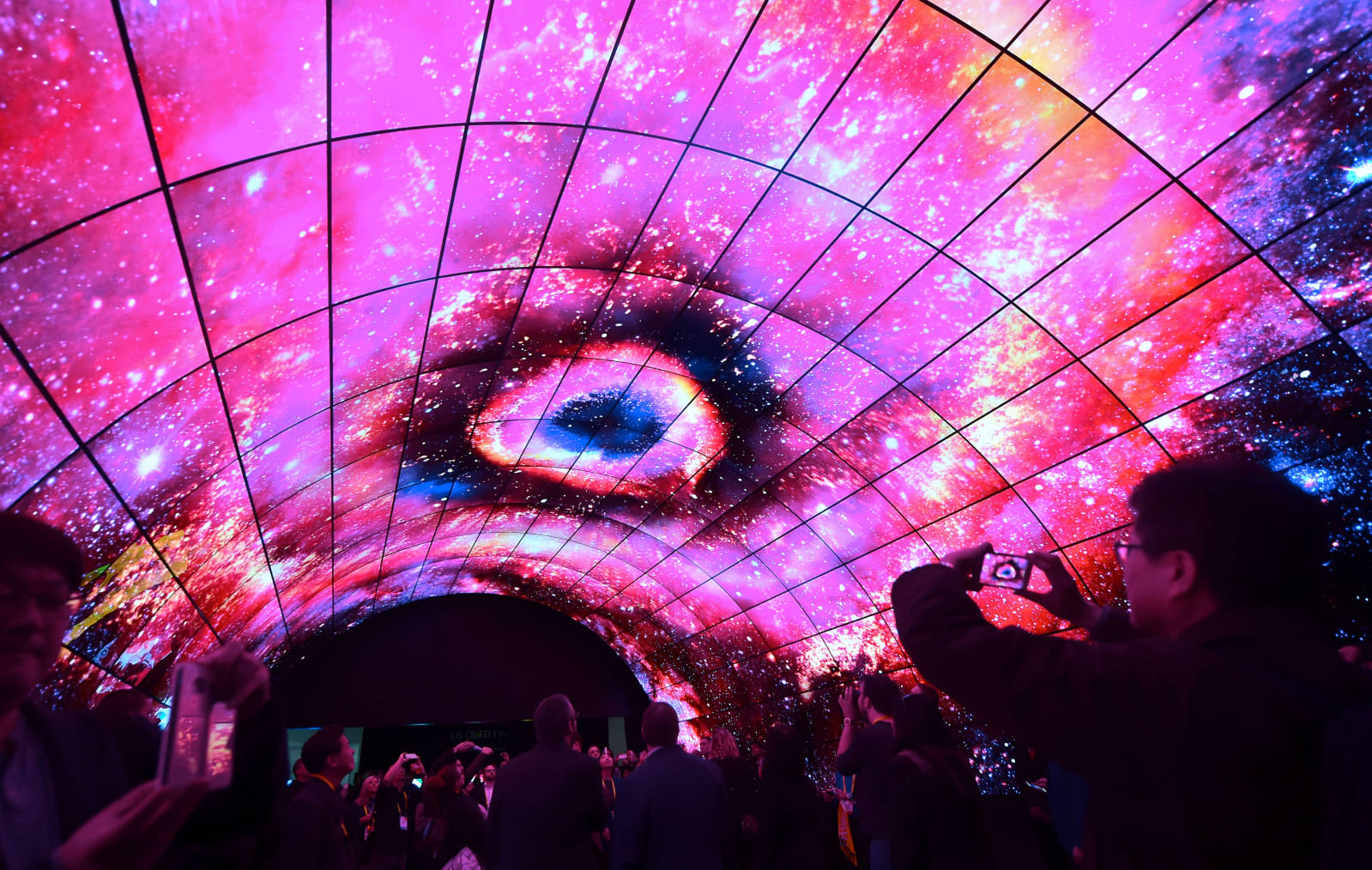 No matter how far CES broadens its horizons, it'll always have a large space reserved in its heart for the TVs of the future. This is, after all, the show where the latest and greatest displays make their debuts in the hope of winning over a prime position in our living rooms. And 2018 looks to be the hottest contest for the public's affections since Edward and Jacob went toe-to-toe in Twilight. (As an aside, shortly after Twilight was published, the big blows between HD-DVD and Blu-ray raged at CES 2006, a fight that many are embarrassed to have been invested in).

Of course, if your wallet won't stretch to a ticket that reaches the rarefied air of a premium set, don't be too disheartened. Lower-end manufacturers, like Vizio, TCL and Hisense, are now knocking out respectable, realistically-priced sets that you aren't ashamed to have in your home. Not to mention that, in the last few months, we've seen TVs from Philips and RCA launch with built-in Roku streaming. So expect to see plenty more displays that offer decent quality and excellent streaming for very little cash.

But for those who just want to ogle the flashiest TVs out there, CES will probably have something to whet your appetite, too. At 2017's show, LG debuted a TV that was just 2.6mm thick, making it so thin it had to be wall mounted, because it couldn't stand up on its own. LG also showed off a display that had speakers built into the screen, reducing the need for an additional soundbar, a feature that Sony has also embraced.

Traditionally, cars aren't considered consumer electronics, but as they get smarter and get electric motors, their justification for being at CES increases. Ford CEO Jim Hackett is the show's keynote speaker this year, and you can expect that a lot of mobility companies will be showing off their wares. And there's plenty to be excited about, with a whole raft of tech startups looking to supercharge the staid world of automotive engineering. We're expecting to see companies building new driver-safety AI systems, cheaper LIDAR sensors and smart-charging devices. All of which will contribute to the infrastructure necessary to make electric, self-driving vehicles cheaper, faster and better.

Similarly, it won't just be electric skateboards that fill in the void around personal electric transportation at the show. We'll be looking out for electric scooters, self-balancing hoverboards and other gear to help you get around cities faster. We already know that OjO is teaming up with Ford to produce a range of electric scooters, and would be certain that we'll find plenty more battery-powered transports at the show proper. Not to mention all of the concept vehicles that we can expect to see, complete with futuristic blue LEDs that make sure you know that it's... you know, futuristic. 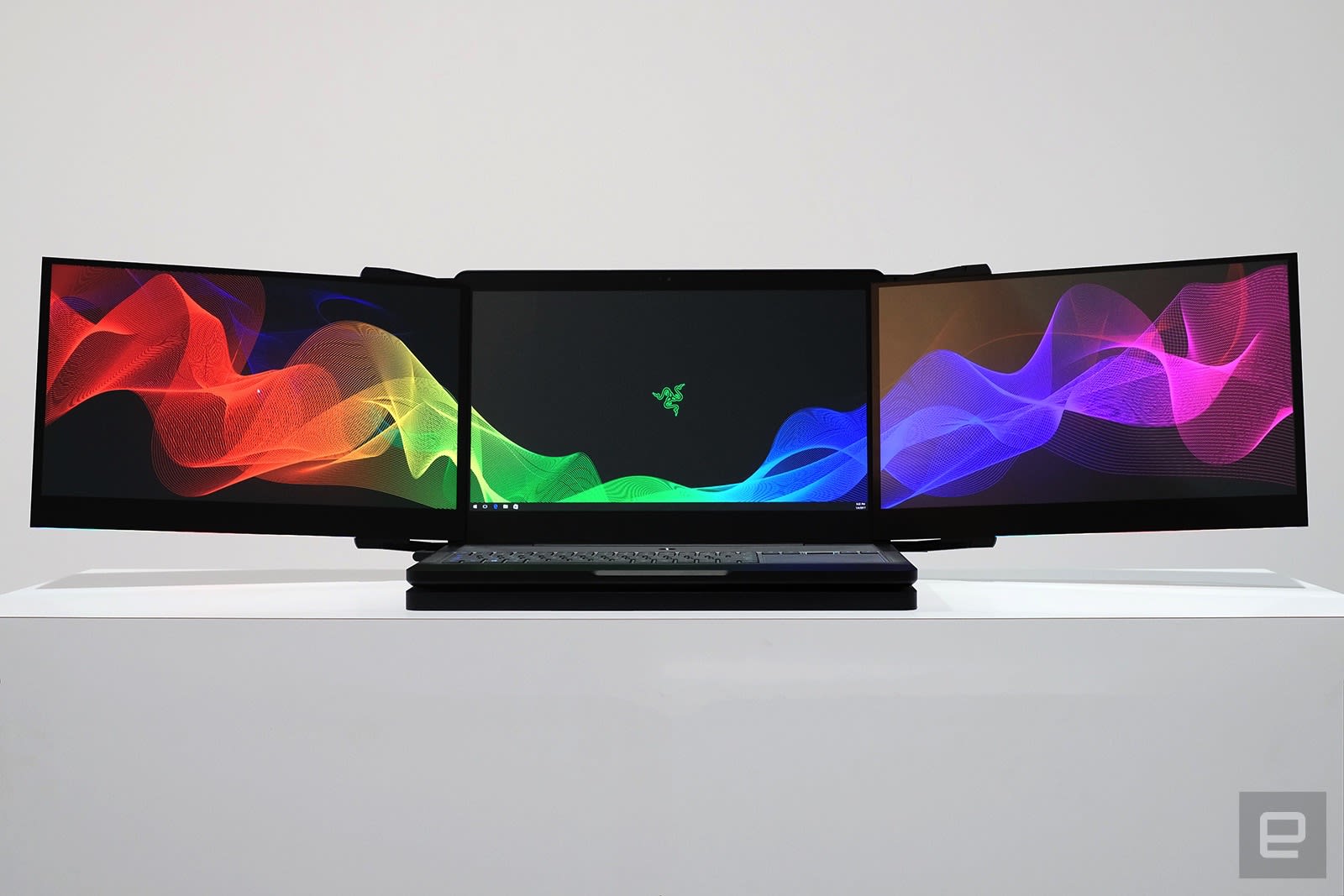 CES has played host to a few big gaming launches over the years, like the Xbox and Oculus Rift, but it's hardly a gaming show these days. That said, we can expect to see plenty of gaming companies appearing, even if they will keep the bulk of their powder dry for E3 later on in the year. Beloved brand Razer normally makes a big splash at the show, but that may not be the case this year -- after all, it only recently released its first smartphone. It's likely that all attention will be on its foray into the mobile space and encouraging users to treat it as a gaming device in its own right. That said, we may see some accessories for the Razer Phone, since the company is all about building ecosystems around its products. In addition, it's plausible that we'll see another of the Razer's "project" devices, which aim to push the boundaries of what gaming can do. In recent years, we've seen triple-screened laptops and modular PC components make their bow in Las Vegas.

Of course, it's likely that we'll see plenty of flops and pixels being doled out from the back of NVIDIA's truck, but that's not where the gaming world is focused right now. Since so much of the hard work -- and money -- is sloshing around the eSports world, we're expecting that to be a big focus of the show. In the last year, we've seen a host of big names launch eSports projects, from Nickelodeon and the NBA to... Fernando Alonso.

VR may not have set the world on fire just yet, but it's likely that we'll see something from the AR and VR space at the show. Microsoft, which is pushing its Mixed Reality Platform, already has partners in HP, Lenovo, Samsung, Acer, ASUS and Dell, and more could be on the way. We'll also wait with bated breath for developments from both HTC or Oculus, both of which are leading the charge in the space.

We already have smart doorbells and smart thermostats, but what about making other parts of our homes as smart as that? It's likely that CES will demonstrate plenty of cheaper and better-looking spins on existing ideas, but perhaps the biggest change will be on the inside. After all, Google and Amazon have spent the last few years trying to make Alexa and Assistant work with as many devices as possible. It's probable that we'll see a whole new raft of gizmos that integrate with your favorite voice interface. LG jumped ahead of the CES line by unveiling its ThinQ speaker with Google Assistant integration, and we're expecting plenty more where that came from.

Amazon has already shown off its own home-access platform for deliveries, so why not widen that to third-party hardware? And since it's a neck-and-neck race between these two companies, expect Google to follow suit, letting you open your front door simply by speaking. Not to mention all of the see-through fridges, connected crockpots and smart bathroom facilities that are likely to be on show. We're also expecting, like at IFA last year, to see a big push in the smart appliance space, such as the third-generation LG Styler and even more comprehensive smart control systems.

CES is a grab bag of technology that is designed, by and large, to make our future better, so there's always room for a surprise. Honda has already revealed that it will be bringing a quartet of robots to the show -- including a smart wheelchair to help folks get around and an autonomous delivery robot. Last year saw a surge in companies offering next-generation WiFi gear, including ASUS, Norton and Linksys. We'd expect to see plenty more to come, with a focus on keeping your Internet of Things devices secure, and ensuring your kids can't Google anything too erotic when you're not looking.

Away from the hardware front, we're expecting to see plenty of debate about how much political and social power technology companies currently hold. Many are anxious about what Silicon Valley can do, and has done, over the last few years, with blind optimism giving way to mistrust. Consequently, CES is playing host to several hand-wringing seminars where technologists debate the best way to move forward.

Some of this is playing out in the startups that are exhibiting at the show, a handful of which are looking to tackle online bullying and digital extremism. There will also be some talk about how technology companies can do better, although much of this talk will be for naught if the heavy hitters -- Facebook, Google, Microsoft, Amazon and Twitter, amongst others -- aren't at the table.

All products recommended by Engadget are selected by our editorial team, independent of our parent company. Some of our stories include affiliate links. If you buy something through one of these links, we may earn an affiliate commission. All prices are correct at the time of publishing.
CES 2018: What to expect
2018
av
ces
ces2018
entertainment
gadgetry
gadgets
gaming
gear
green
home
internet
medicine
mobile
personal computing
personalcomputing
Preview
robots
wearables
WhatToExpect