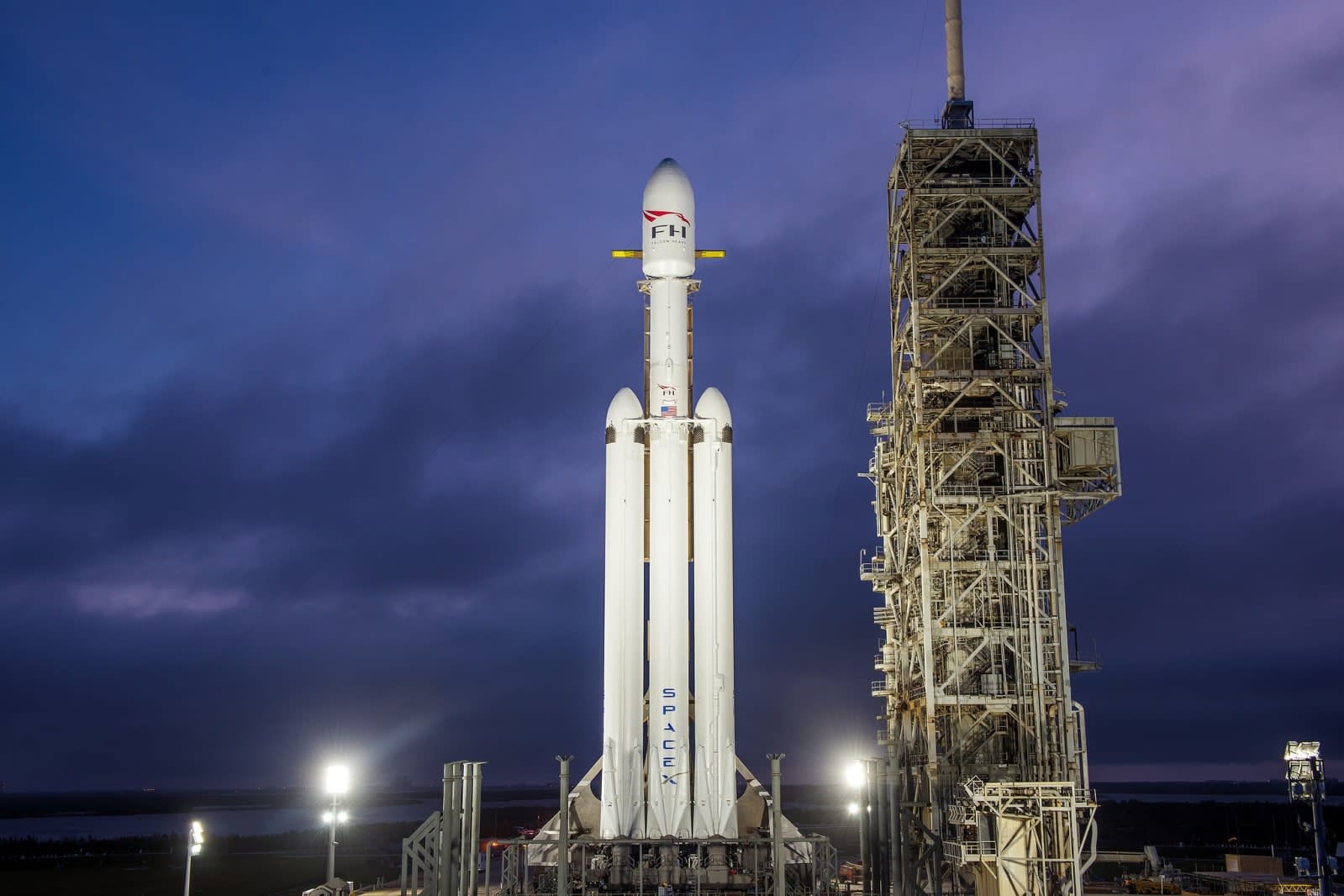 We've been talking about SpaceX's new rocket, the Falcon Heavy, for years now, so it's exciting to see that the launch vehicle inching closer to its maiden voyage. Last week, the rocket was raised to a vertical position on Pad 39A before being lowered to make way for the Falcon 9 Zuma mission, which launched on Sunday evening. Now, the Falcon Heavy has returned to the pad to prepare for the static fire test, which will take place this week. The test window is tomorrow, January 10th, between 1PM and 7 PM ET.

The static fire test means that the heavy duty rocket is almost ready for its first launch, the payload of which will be one of Musk's Tesla Roadsters. During the test, all 27 of the Falcon Heavy's Merlin engines will fire at full thrust while the rocket remains on the launch pad. It's a chance to test all the engines at once and monitor the startup process, pressure, temperature and flow of the propellant. If the test is successful, a launch date could be scheduled very soon. It's currently targeted for takeoff in late January.

There were questions about whether Falcon Heavy would be delayed because of rumors surrounding the fate of Zuma. While SpaceX maintains that the Falcon 9 launch vehicle performed as expected, it appears that the satellite isn't functioning. The payload from Northrop Grumman was a secret, and therefore it's hard to get any facts about its status. However, SpaceX made clear this morning that the rocket wasn't at fault for any failures (without confirming or denying that there were problems with Zuma), and that the schedule of Falcon Heavy would not be affected.

Update: Now it's January 12th, and the static fire test still hasn't happened. The delay is nothing to worry about; with a rocket of this size and complexity, it's pretty understandable. It's now looking like the test has been rescheduled for tomorrow, January 13th, between 5PM and 10PM ET.

Update: It's Tuesday, January 16th, and the static fire test may happen today in the window of 4 PM to 10PM ET. No guarantees, but we'll keep an eye on it.

Update: You guessed it. The static fire test has been rescheduled for no earlier than Friday, January 19th, with a window between 3:30PM and 9:30PM. This is dependent on a successful Atlas V launch on Thursday, so don't be surprised if it slips again.

Update: The static fire test has now been moved to Saturday, January 20th. The window is open for six hours and starts at 4:45 PM ET. The test was moved because a ULA launch that didn't go up as planned yesterday. It's now rescheduled for today, and the launch has priority over the static fire test.

In this article: falconheavy, space, spacex, staticfire, tomorrow
All products recommended by Engadget are selected by our editorial team, independent of our parent company. Some of our stories include affiliate links. If you buy something through one of these links, we may earn an affiliate commission.